Its been a long time since I’ve posted anything, but I thought I should make at least one appearance before the end of the year, to do my normal look back over the past twelve months and pick some of my favourite photos.  I always call this annual post my best photos of the year, but really they are just my personal favourites and are a reflection of some the walks, places or views I’ve enjoyed the most.

I last posted back in June, and shortly after that my back went, the result of a longstanding back problem that flares up now and again, usually leaving me pretty immobile for a few weeks or months.  By the time I got on my feet again, I had sort of lost interest in blogging, although I continued to hike and take photographs.  Rather than blogging, I concentrated my efforts on making You Tube slide shows, mainly on the beaches of Donegal – Adrian McGlynn You Tube channel

As a result of those slide shows, I spent many happy days visiting and photographing loads of Donegal’s stunning beaches, in addition to my normal hill walking and trips around Ireland.  I hope to start blogging again properly in the new year, and have loads of photos and places to cover due to my break, but for now, I’ll indulge myself with this look back.

Mullaghdoo in the Sperrin Mountains, Co Tyrone, at sunset.

My first walk of the year was on the 2 Jan, on Mullaghdoo on the Co Tyrone side of the  Sperrin Mountains.  It was a cold day, with frost on the ground, and some great light as the evening closed in.  I was walking the mountain on the way to completing my Local 100 list of hills, which I finished a few weeks later, and it was a great start to the year.

I didn’t have to go far for the above shot, taken in the countryside outside my home town of Castlederg.  It was taken on a frosty morning in February, during a fiery sunrise.

Every year now, in February, I try to make it down to Dublin for the Mountainviews.ie annual get together for hill walkers in Ireland, with the added bonus of getting to do some photography in a – rare for me – city environment.  I was pleased to get this blue hour shot of the famous Ha’penny Bridge over the River Liffey.

On a stormy beach on Cruit Island in Co Donegal.

I mentioned my You Tube slideshows on the beaches of Donegal, which I decided to put together when I realised that over the years I had visited and photographed many of them already.  Donegal has more beaches than any other Irish county however, and I found that I had many more still to visit.  It was no hardship to spend many happy days in all weathers, travelling round the beautiful Donegal coastline, and this was one my early visits, to a beach on Cruit Island (linked to the mainland by a road bridge over a narrow channel).

Another hillwalking outing early in the year, on a cold January day, this time on Carnaween in the Bluestack Mountains, Co Donegal.  It was a really stormy day with strong winds, hail and rain, but I was well rewarded with great views and light. 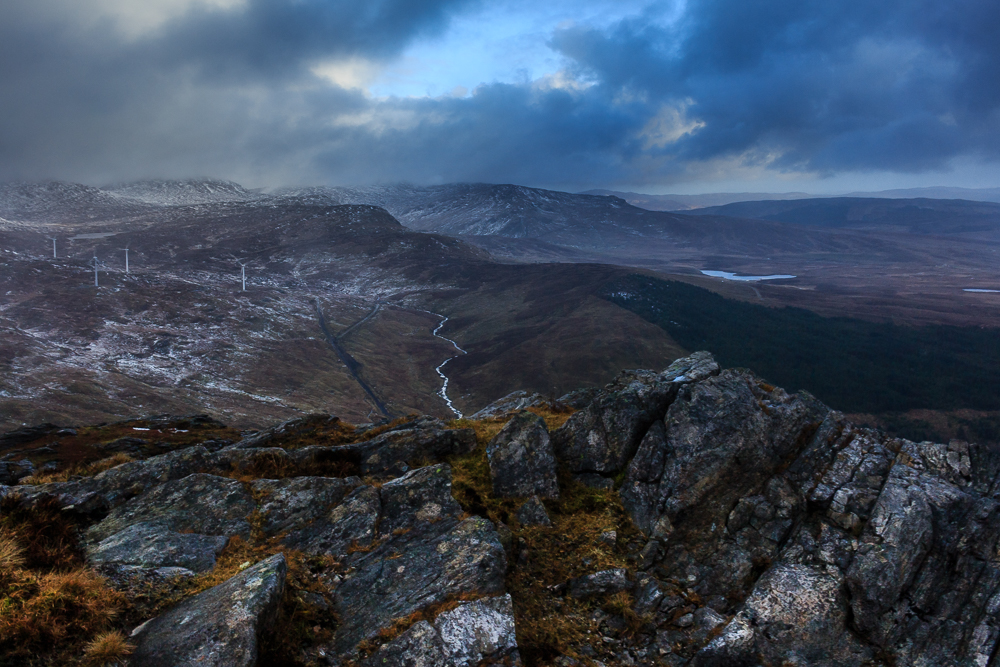 This image was taken on the same day on Carnaween, just minutes later, looking in the opposite direction, over a wintry landscape.

The view over the loughs near the summit of Knockalla in Co Donegal.  I love the range of different weather you get to experience while hill walking in Ireland – from beautiful sunny days like this, to ice and snow, or dramatic, stormy skies.  Each has something to recommend it, and I love trying to capture the variety in photographs.

After climbing Knockalla, I drove the same day to the Rosguill Peninsula, also in Co Donegal where I climbed Crocknasleigh Hill.  It was a small hill, but I had a steep, dangerous descent down the northern side to the “Murder Hole” beach where I hoped to get a sunset shot.  The light ended up even better than I could have hoped for in this stunning location.

The Elephant Rock near Ballintoy on the Co Antrim coast.

Conditions had been a bit overcast as I visited Ballintoy on the Antrim coast, but I was rewared for hanging around with an unexpected, colourful sunset behind the well-known Elephant Rock sea stack. 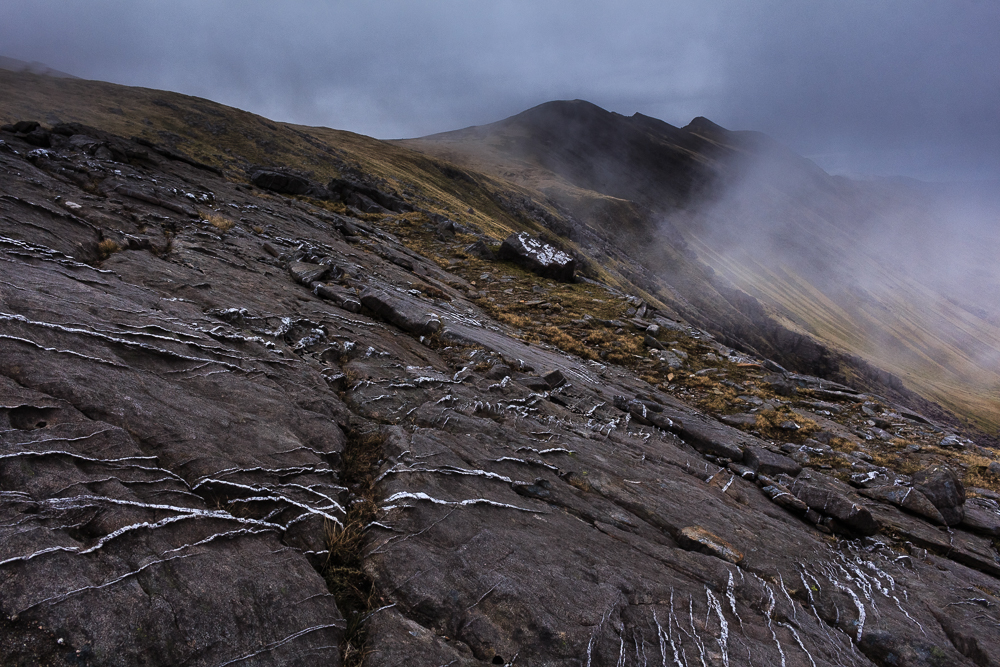 In May I had a fantastic day’s walking on Mweelrea Mountain and some of its neighbouring peaks, in Co Mayo, the last of my 4 Provincial tops.  We had changeable weather on the day, but this was one of my favourite shots with moody, dark clouds closing in and white quartz veins in the rock in the foreground. 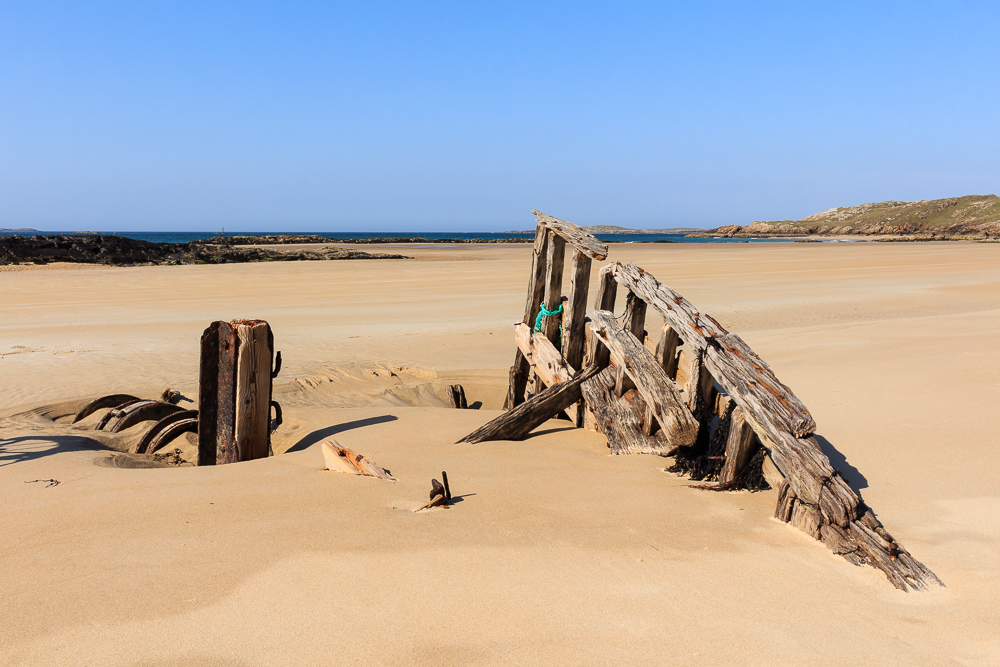 Back on the Donegal coast for this shot of the remains of a boat, wrecked on the Fanad Peninsula.  The beach was stunning, but its remote location, requiring a walk over hills and fields meant I had the long stretch of sand to myself. 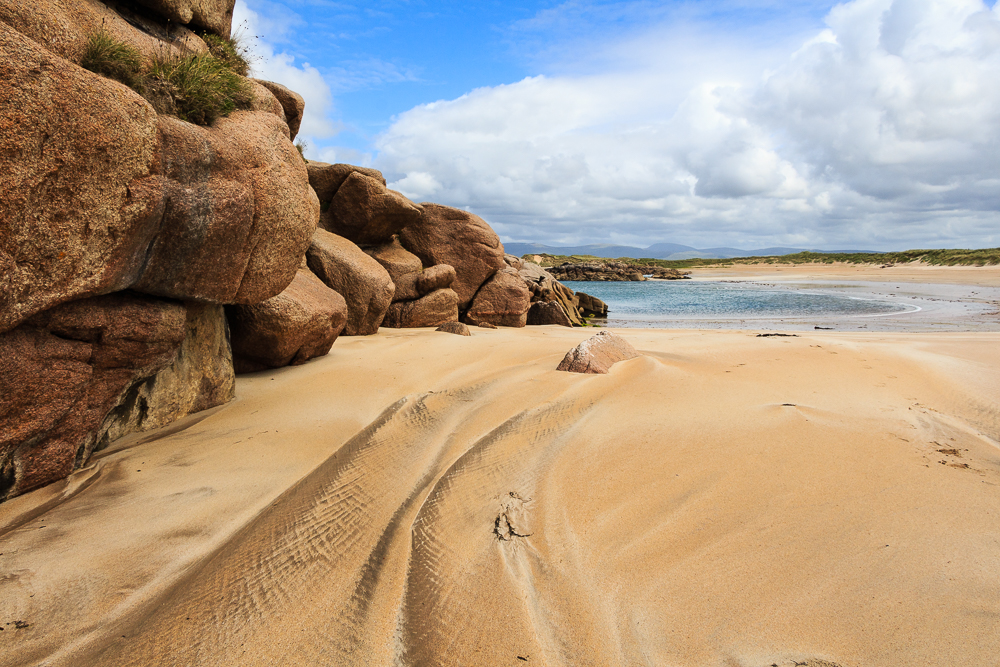 It was the patterns in the sand that caught my eye for this photo on Mullaghderg beach in Co Donegal. 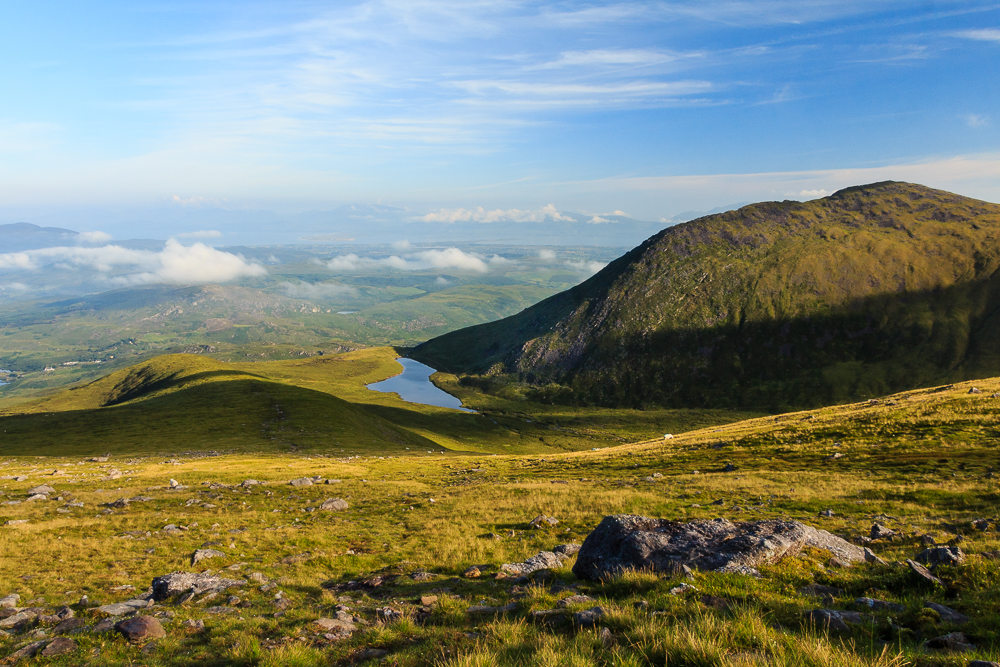 On the way up Caher and Caher West Top.

Its always a treat to get down to Co Kerry, and I was lucky with the weather for this visit.  This shot was taken on the way up Caher West Top on the way to Ireland’s third highest peak, Caher. 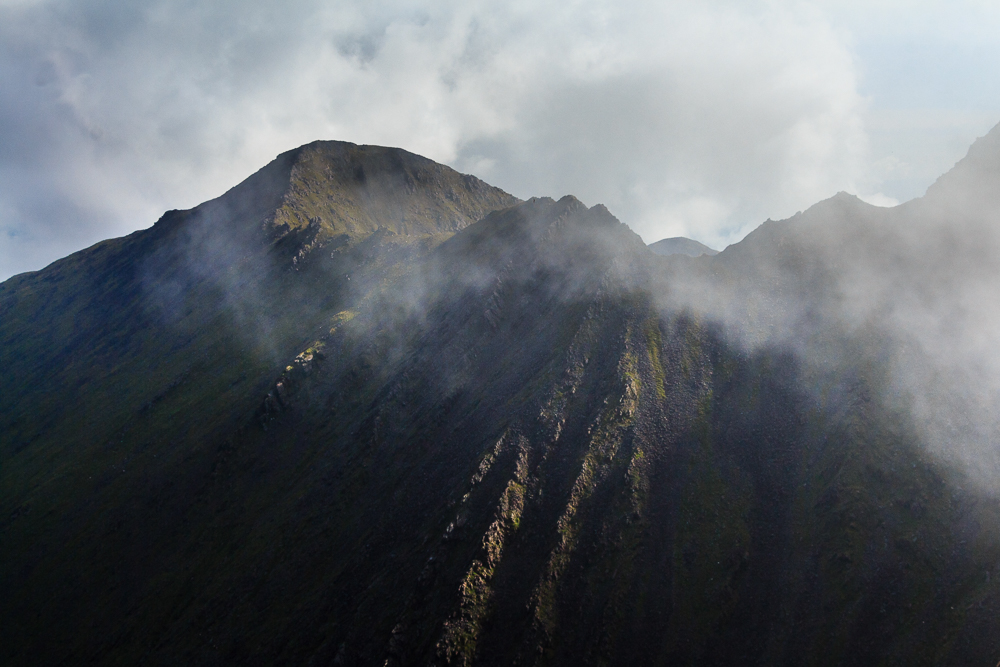 Taken on the same day as the last photo, this time from Caher itself.  The view is across to the second highest mountain in Ireland, Beenkeragh, and the well known Beenkeragh ridge which links it to Carrauntoohil.

We spent our summer holidays in Co Wexford this year.  I hadn’t visited the county much previously, so there were plenty of new photographic opportunities and I loved it there.  This panoramic shot of Johnstown Castle was taken in the extensive castle grounds.

Later in the summer, we had a short break, camping at Renvyle Beach in Connemara, Co Galway.  Being right beside the beach was perfect when we got a colourful sunset – I had only a few metres to walk to get this one.

Another sunset on Renvyle beach.

The very next night after the last photo, we got another spectacular sky, lit up by the sun which had already dropped below the horizon.  Made me think, once again, how great it would be to live right beside the sea.

The Autumn colour hadn’t fully arrived yet when I took a walk in Ervey Woods in Co Derry, but there were some golden leaves starting to appear, and the sunlight breaking through the canopy boosted the colours.

Autumn near the village of Park in Co Derry.

A bit more Autumn colour this time just outside the village of Park in Co Derry.  Sometimes you have to work for your photos, and walk to isolated locations, but this one was taken from the roadside. 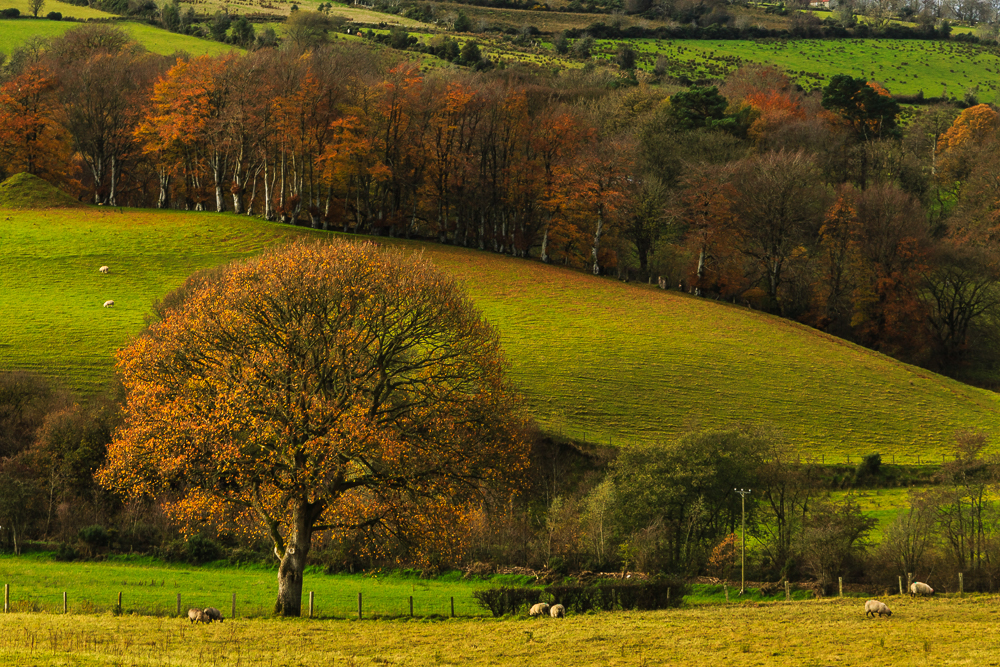 Not far away from the last photo, and on the same day.  Its always great for landscape photographers when the Autumn colour arrives. 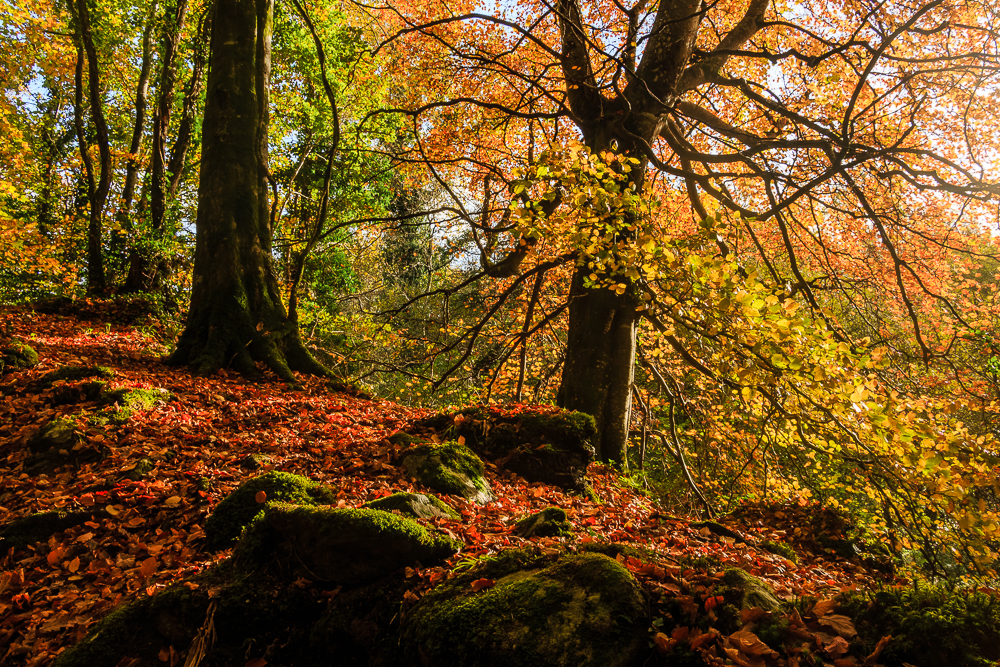 A final Autumnal shot, taken on a return to Ervey Wood in Co Derry, and the colours were much stronger on this visit.

In December, I was on my way to the mountains in Co Donegal for a day’s hillwalking, and made a slight detour to get this photo of a snow-capped Mount Errigal, one of the most iconic mountains in Ireland.  I used an ND filter on the lens for a long exposure to blur the water and clouds.

Errigal features again in this shot from Drumanlifferney North East Top.  It was one of my first hikes into the mountains this winter where we had a covering of snow – probably my favourite time to be hill walking. 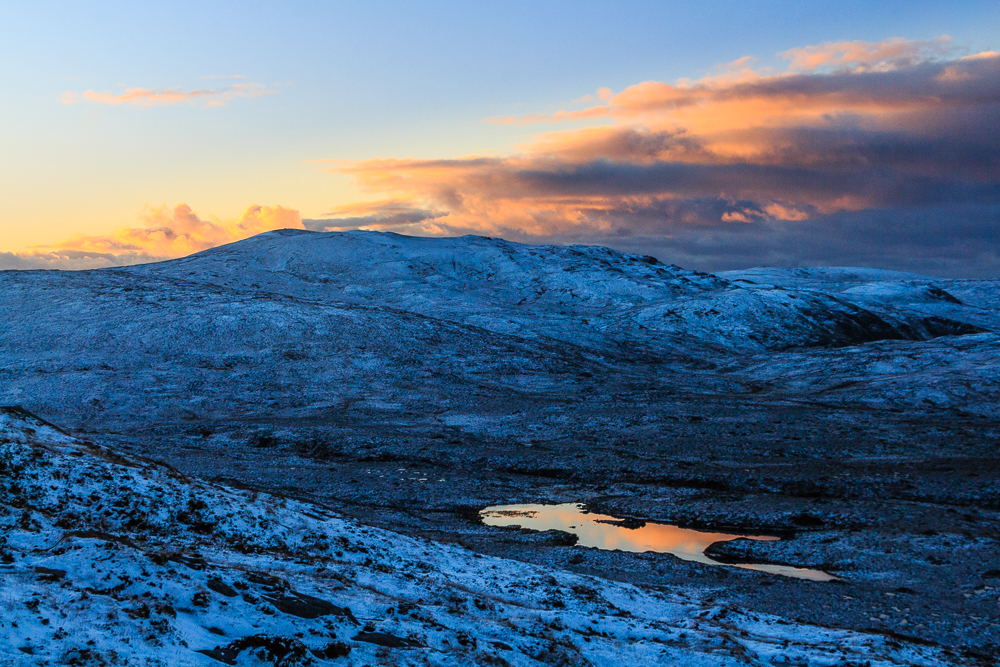 Taken later the same evening, just after sunset.  The snow and the light tempted me to stay on the mountain until late, meaning a walk back in the dark.  A good reason to always carry a head torch, and worth the wait for the views. 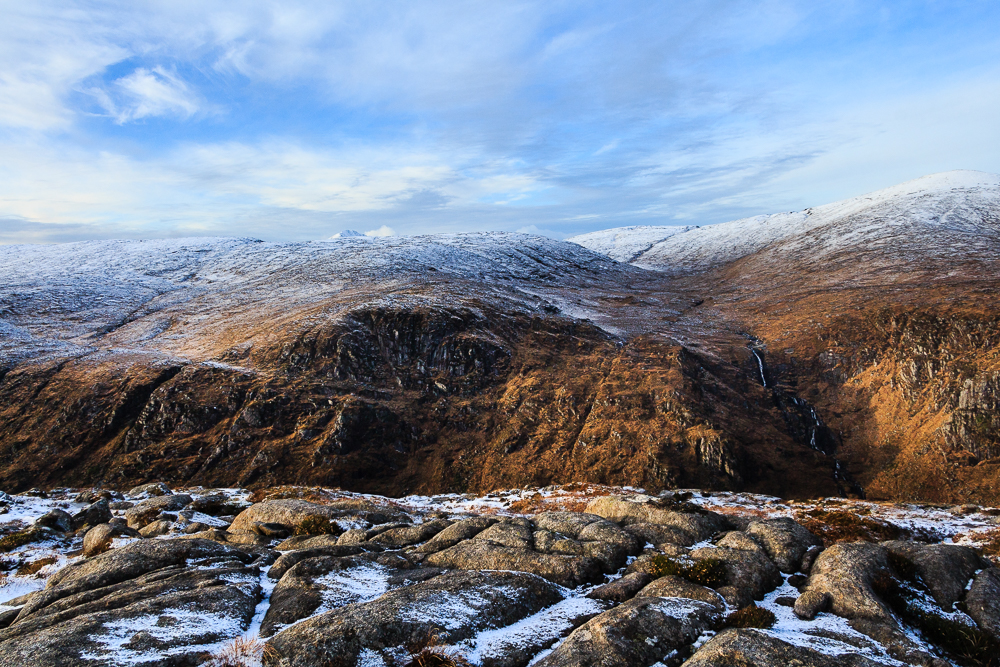 My most recent day hillwalking at the time of posting, and only a couple of days left in the year so these last two shots just squeezed in.  There was snow on the hills again, and this time I was on Farscallop in the Glendowan Mountains in Co Donegal.  It was a fantastic day, with snow, great scenery, and interesting cloud cover as a photographic bonus.  There wasn’t another person around for miles, making it seem all the more special.

Taken on the same day.  Its great to be able to take advantage of weather and landscapes like this.  Its hard to describe the sense of well-being you get from the isolation and beauty of a place like this, maybe made even better by the effort it takes to be there.  Not a bad way to end the year!

Hopefully I’ll be back to posing a bit more regularly again now.  Happy New Year to everyone in the meantime!