First off, apologies to all those who’s blogs I’m following – I am sure to have missed a lot of posts over the last week or two.  It has been very hectic with shooting and editing photos for, and putting together some of the youtube videos for my series on Donegal beaches.  I promise to go back shortly and check out all the posts I’ve missed!

And in between, I’ve been going through the many images I took on a recent trip to Mweelrea in Co. Mayo.  I had been intending to walk the 814 metre high Mweelrea in Co Mayo for a long time, and finally got round to it in April this year.  As well as being the highest mountain in Mayo, it is the highest mountain in Connacht and the last of the four Irish provincial tops for me.  Mweelrea sits in its own mini range named after it, and it would be an opportunity to do a horseshoe walk taking in four other summits over, or close to, 800 metres.  It would be a big walk, and as its a fair distance from Tyrone, a 6 o’clock departure was called for, followed by a long drive.

Unusually for me, I would also have two companions with me on this trip – I usually walk alone because the photography would drive anyone else mad, with constant stops and diversions!  Nice to have the company for the long drive and walk though.  Eventually, after passing through the village of Louisburgh, we were in the Doo Lough Valley and were getting our first glimpse of the mountains we would be hiking.

Our first look at Mweelrea as our drive neared its end, and we stopped by the roadside to take it in from a distance before approaching.

As we continued towards the mountain, along the shore of Doo Lough, I just had to stop again for more fantastic views of our targets, across the still lough.

Looking across Doo Lough at the Mweelrea group.

A great place for a drive, let alone hillwalking.

The plan was to ascend Ben Lugmore East Top first, from the southern end of Doo Lough, after which a lot of the ascent would be done for the day.  After that, it would be a ridge walk, with lesser ascents and descents as we traversed Ben Lugmore, Ben Lugmore West Top, Ben Bury and then Mweelrea itself.  After that the descent would hopefully take us over two smaller bonus tops, Mweelrea SE Spur and Teevnabinnia.  As it happened, we had to change our plans, and didn’t include the two smaller final summits, but more about that later!  As that was our planned finish however, we decided to get the road walking section of the hike done first, by parking near the Eastern foot of Teevnabinnia and walking north along the road to the southern end of Doo Lough.  There we would leave the road, heading west up the steep slopes of Ben Lugmore East Top.  That way, at the end of the walk we would be straight off the hills to the car, with no road walking left to do.

In these spectacular surroundings, the road walk turned out to be great anyway, and we enjoyed the gentle warm up, with great scenery all around. 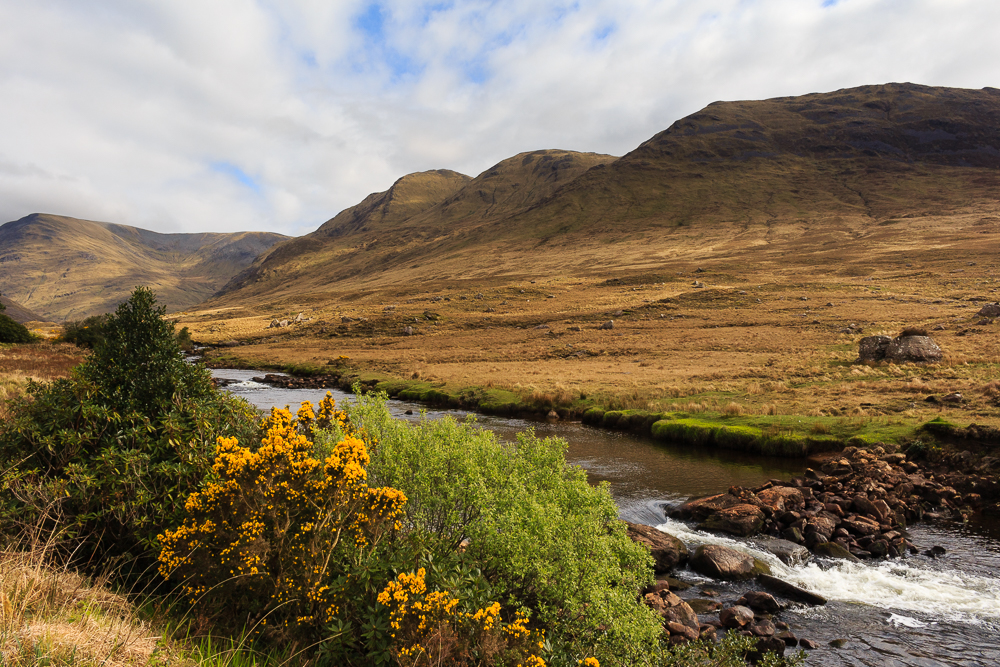 The initial approach by road, alongside the Bundorragha River with the mountains of Ben Gorm and Ben Creggan on the far side.  Great views already! 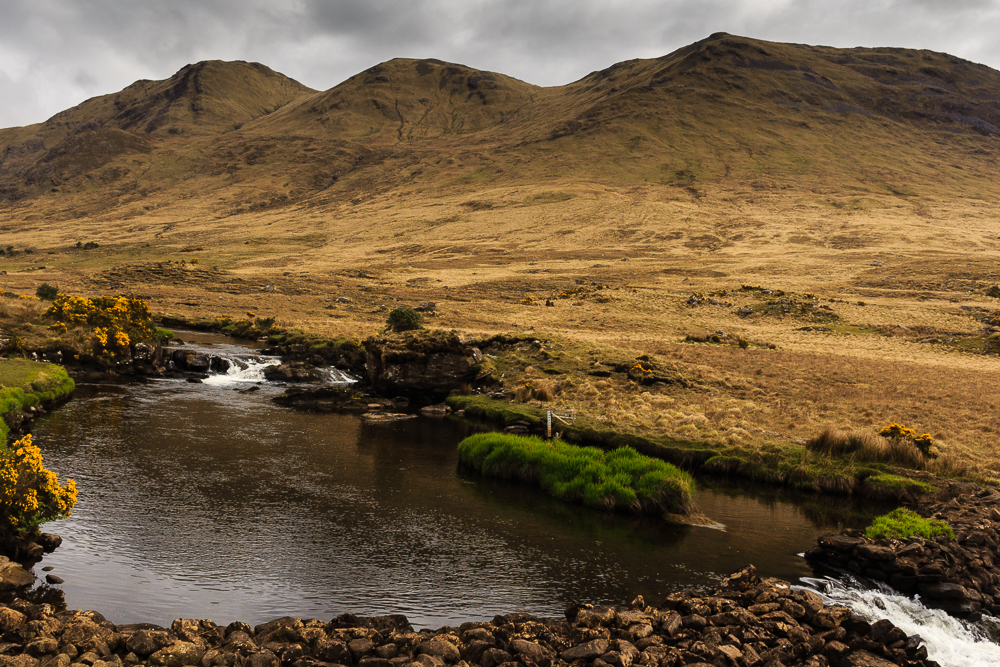 In what seemed like no time, we had walked the 2 or 3 kilometers to the southern end of Doo Lough.  Skirting the lough, we would be at the base of Ben Lugmore East Top, and would begin the tougher walking up the steep slopes to the 790 metre high summit.

Walking along the southern end of Doo Lough, with the slopes of our first summit, Ben Lugmore East Top looming over us ahead!

This would be our last bit of level ground for a while!

Ben Creggan – we were surrounded by impressive and spectacular mountains here.

Almost immediately after leaving the shore of Doo Lough, we found ourselves on a steep climb up the eastern spur of Ben Lugmore East Top.  It was hard going, but we were well rewarded with the quickly gained altitude providing stunning views along the Doo Lough valley, and over to Ben Creggan.

The view over Fin Lough minutes into our climb.

A bit higher now, and on steep slopes.  The views extended now to the Maamturks range on the other side of Killary Fjord.

The slopes of Ben Creggan.

The road we had walked along at the outset, with Ben Creggan and Ben Bury on the far side. 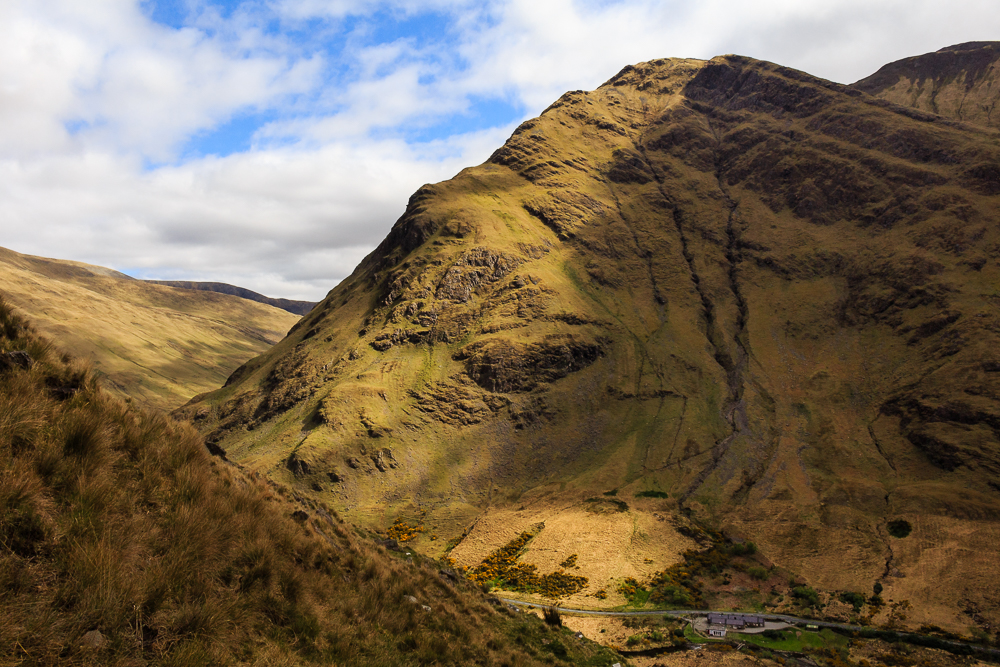 At this early stage we were still well below the summit of Ben Lugmore East Top, despite the altitude we had quickly gained, but the views were already outstanding, and held great promise for the day’s walking ahead.

I’ve mentioned Mountainviews.ie many times on the blog – its a great resource for hill walkers in Ireland, and I’m not the only user blogging on hillwalking and outdoor photography.  I’ve posted links to fellow Tyrone man Martin McAlinden’s fantastic blog Hike Cycle Ireland before – great writing and photography for those with an interest in the Irish landscape, and further afield.

Recently, another Mountainviews user has started his own blog, and I would highly recommend visiting and following.  David Guenot’s blog is lonepeakbagger, and I had the pleasure of meeting David when he was recently in our area bagging mountains.  David has a fascination with and passion for the Irish mountains, and has climbed many of them, which is all the more remarkable as he is from, and lives in France!  He visits Ireland several times a year to indulge his love of hillwalking here.  His blog will cover hiking in Ireland and France, and probably other places too.  Definitely a site worth your attention.