Back to September 2015 for this post, when I was spending an evening in Dublin at a hill walking related event.  Rather than drive home afterwards, or spend the night in the city, I decided to take advantage of the trip by making a foray into the Wicklow Mountains the next day.  This involved driving south, finding a parking spot at the foot of the mountains so that I could get an early start the next day, and having a fairly uncomfortable sleep in the car.

My chosen mountain was Lugnaquilla, often referred to just as “Lug”.  At 925 metres, it is the highest mountain in the province of Leinster (my third of the four provincial tops), and the highest mountain in Ireland outside of Kerry.  There are several approaches, but I would be starting from Glenmalure, and my route would also take me over the 800 metre Cloghernagh.  I slept in the car near the Glenmalure Lodge pub and took the short drive in the morning to a small car park at the Ballinafunshoge Forest Recreation Area.  I was on foot from here, and the first stage was on the zigzag trail through the lower forested slopes of Cloghernagh.  One bonus to sleeping in the car on location was the chance to set off really early. 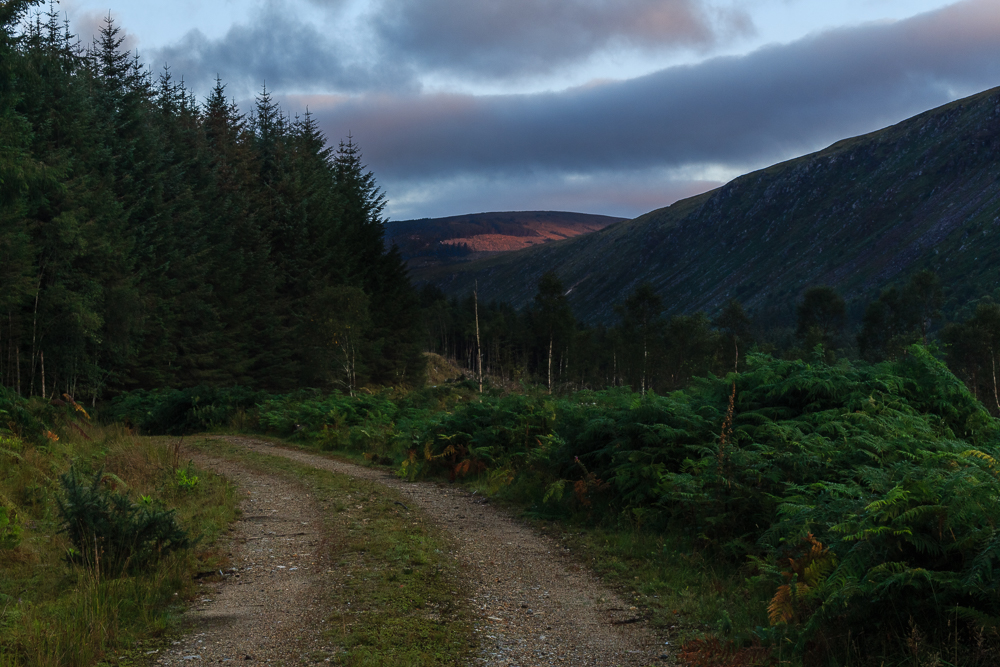 On the zigzag track which winds back and forth up through the forest, in the early morning light. 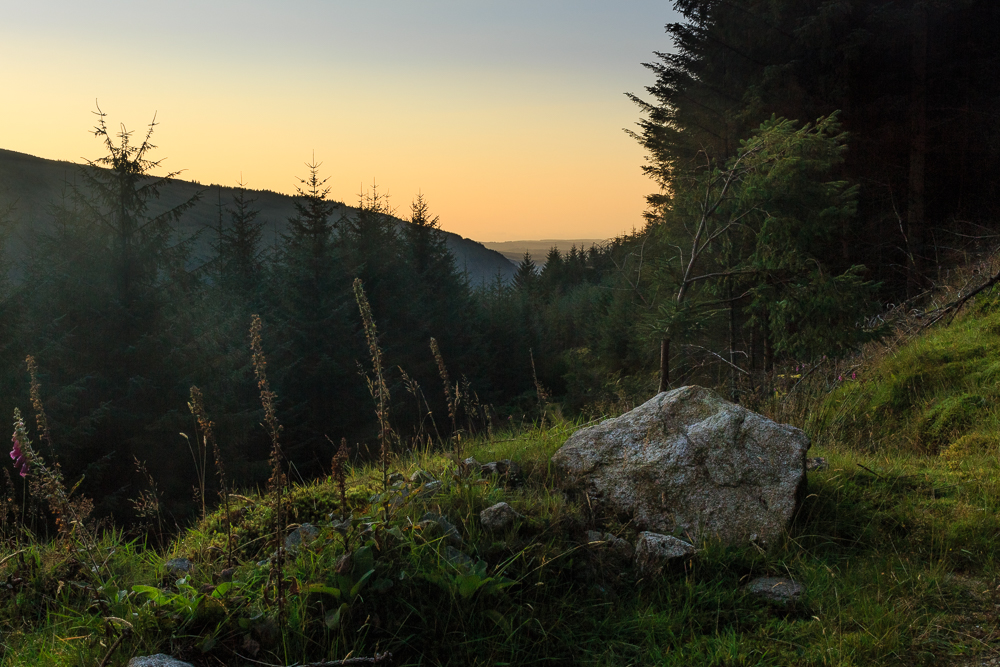 Sunrise lending colour to the sky in the east. 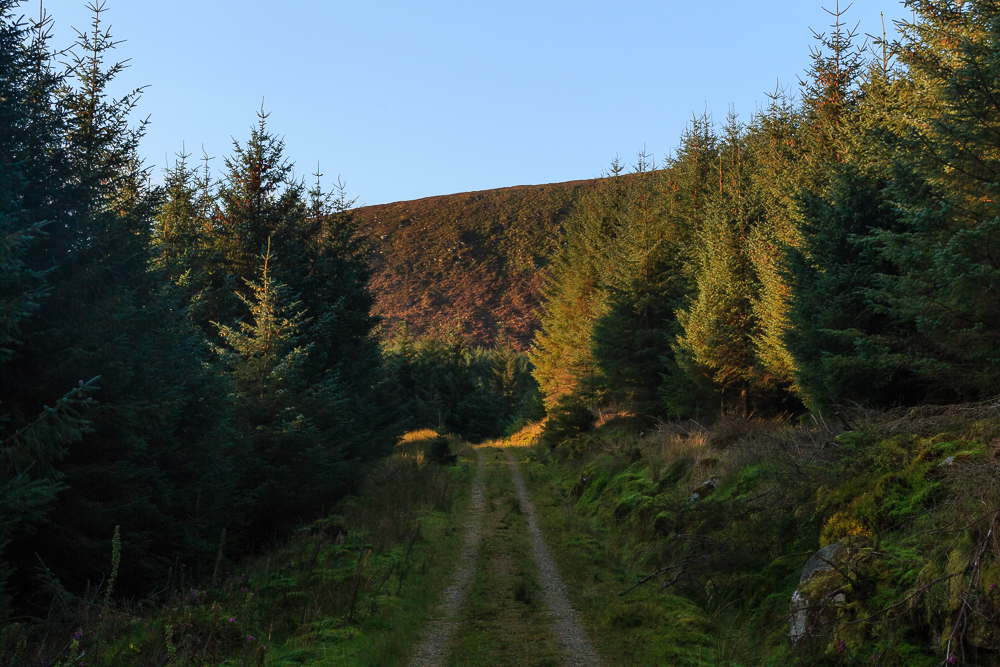 While on the zigzag track, navigation was easy, but there came a point where I knew I had to leave it, and take a short walk through the trees out on to the open hillside.  I had downloaded a GPS track from mountainviews.ie, and without it, it would have been very difficult to identify the spot where I needed to leave the track and head through the trees.  The trail I needed to take was virtually non-existent, and almost impossible to spot in the dense trees.  Pushing through and under the thick growth, thankfully it wasn’t long before I emerged on to the open hill. 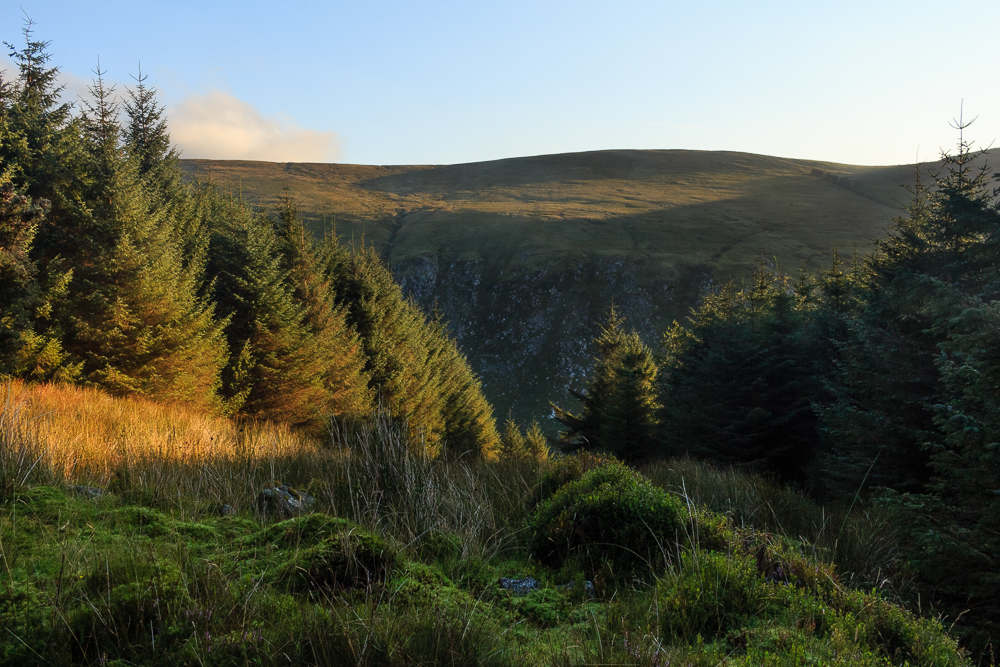 Looking back down just after emerging from the trees, having left the zigzag track. 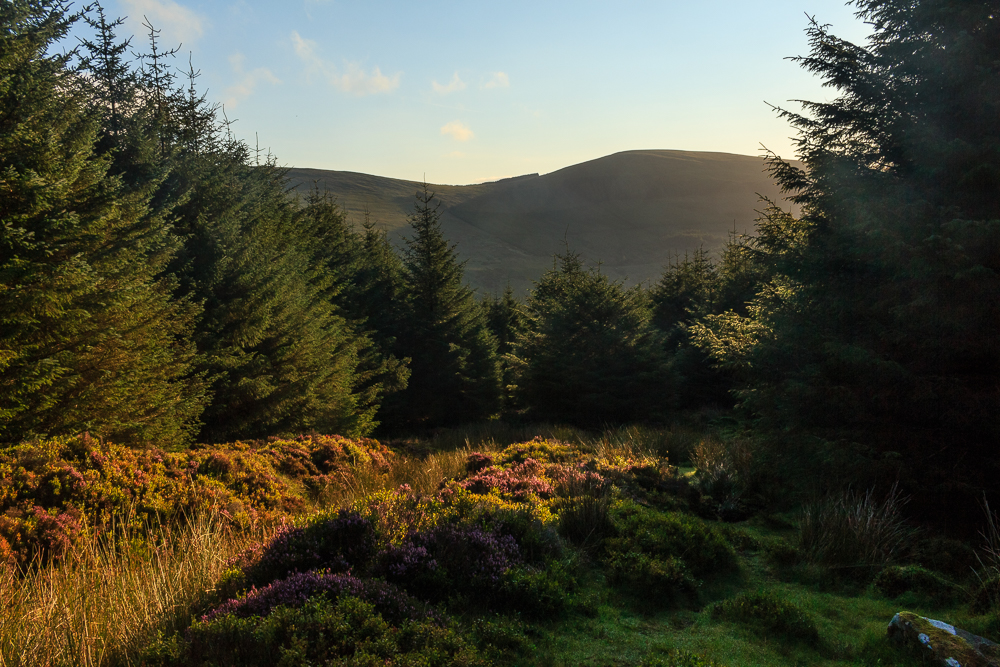 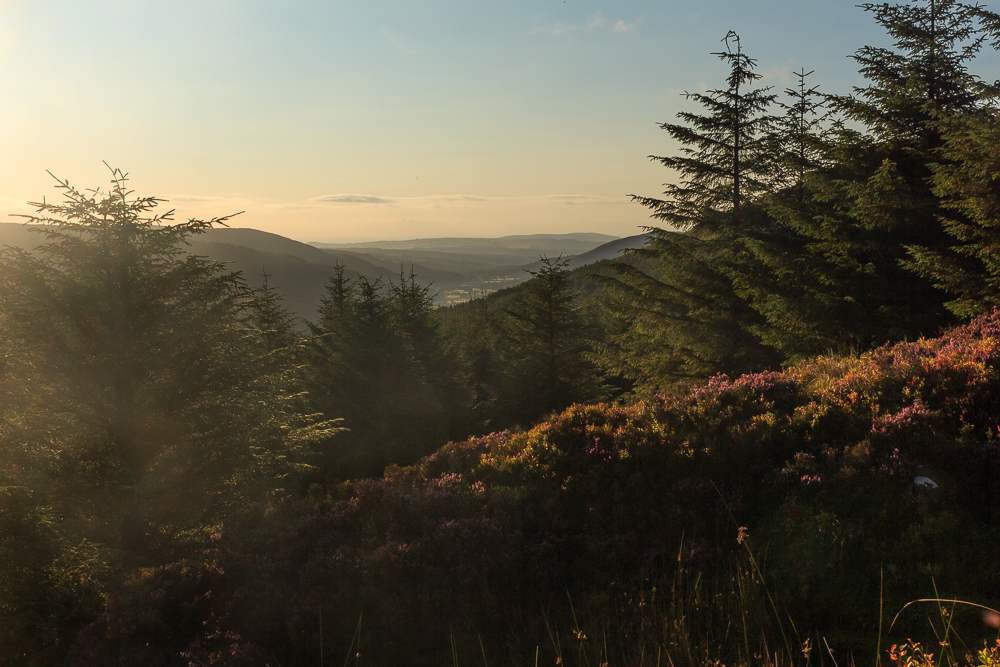 Out on the hillside, I met a deer hunter, covered from head to toe in camouflage patterned gear – even his rifle was covered in the same pattern.  After having walked quite a bit by this time, he was the first person I’d met, and we stood chatting for a couple of minutes.  He was obviously very familiar with, and knowledgeable about the area, and I asked about what I’d taken to be an usual bird call that I’d heard several times while pushing through the trees.  The high pitched noise sounded again as we spoke, and he explained that it was actually the alarm call of sika deer.

We parted ways, and I pushed on through the heather, following the faint track that would lead over a steep section on to the more rounded higher slopes of Cloghernagh.  This part of the route had great views over Arts Lough, which lay at the foot of the steep slopes. 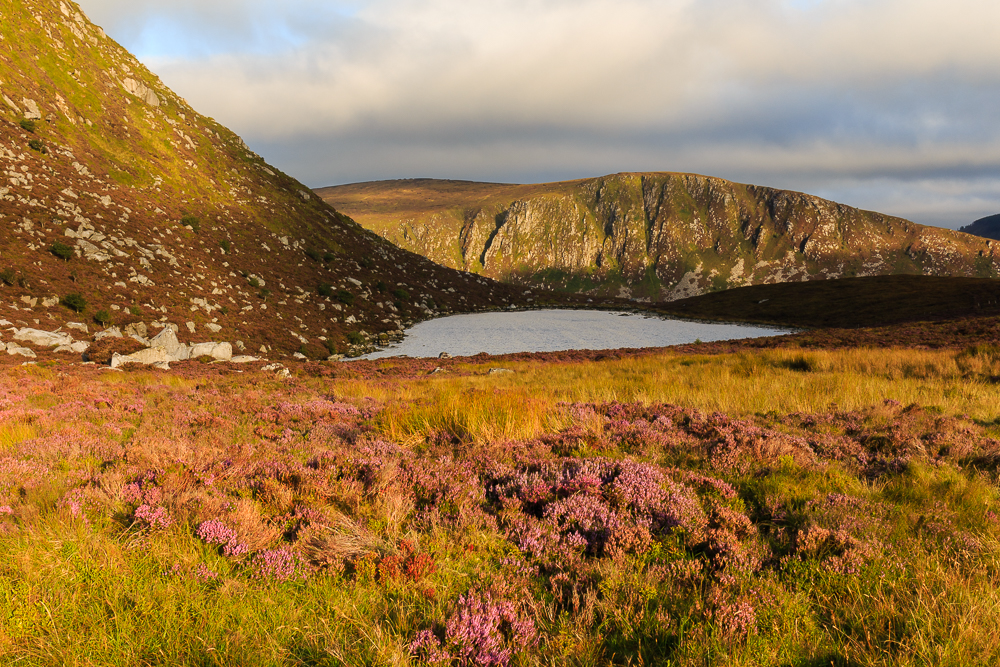 Arts Lough, and to the left, the steep slopes on the northern side of Cloghernagh, that I now had to find a way up.  Benleagh is the mountain in the background.

The golden morning light was making everything look attractive at this stage, but there were some ominous looking clouds building on the horizon, and making an appearance from behind the mountain too.  I feared the perfect weather I’d been enjoying wouldn’t last long.  As I ascended the steep slope I took several shots looking down over Arts Lough while I still had the views. 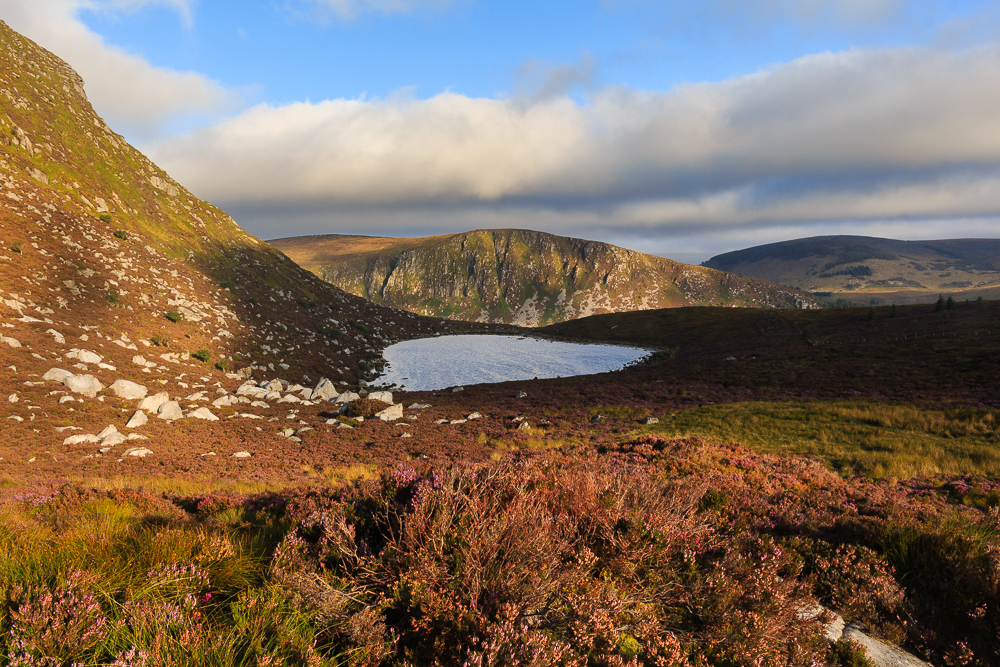 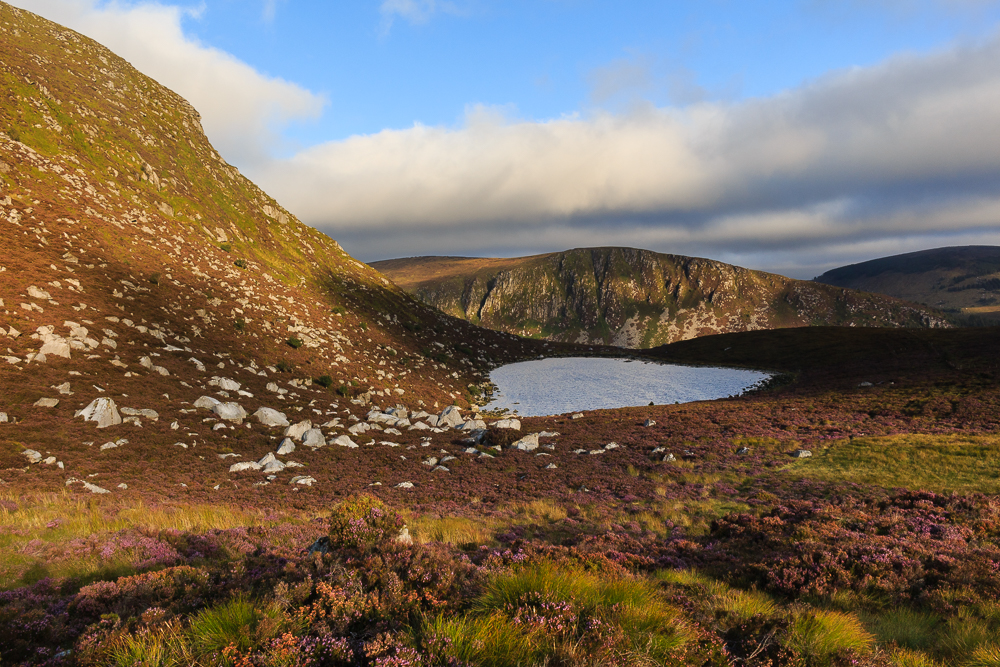 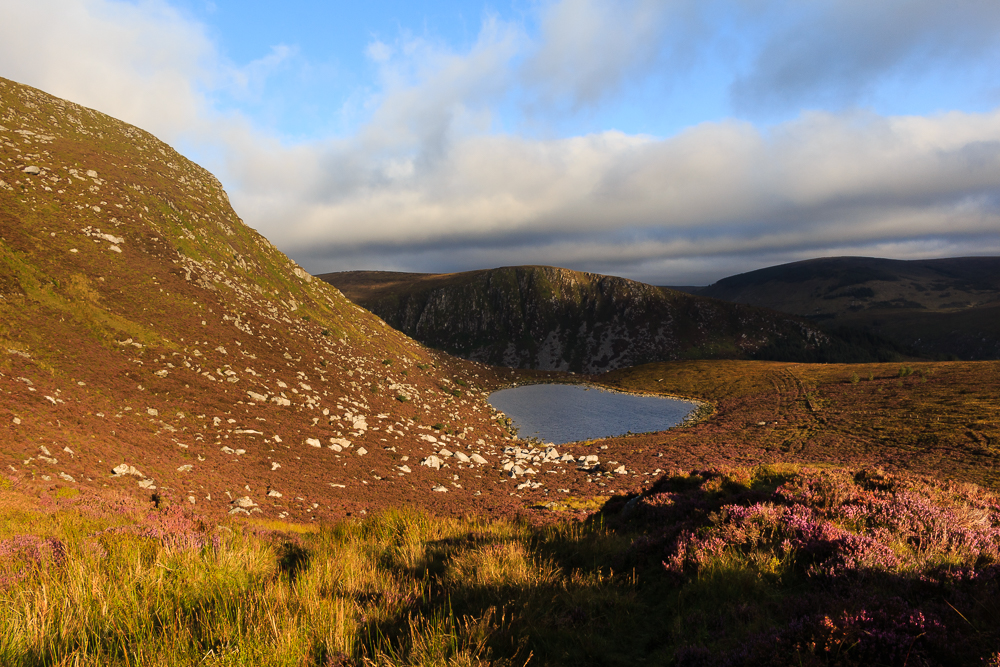 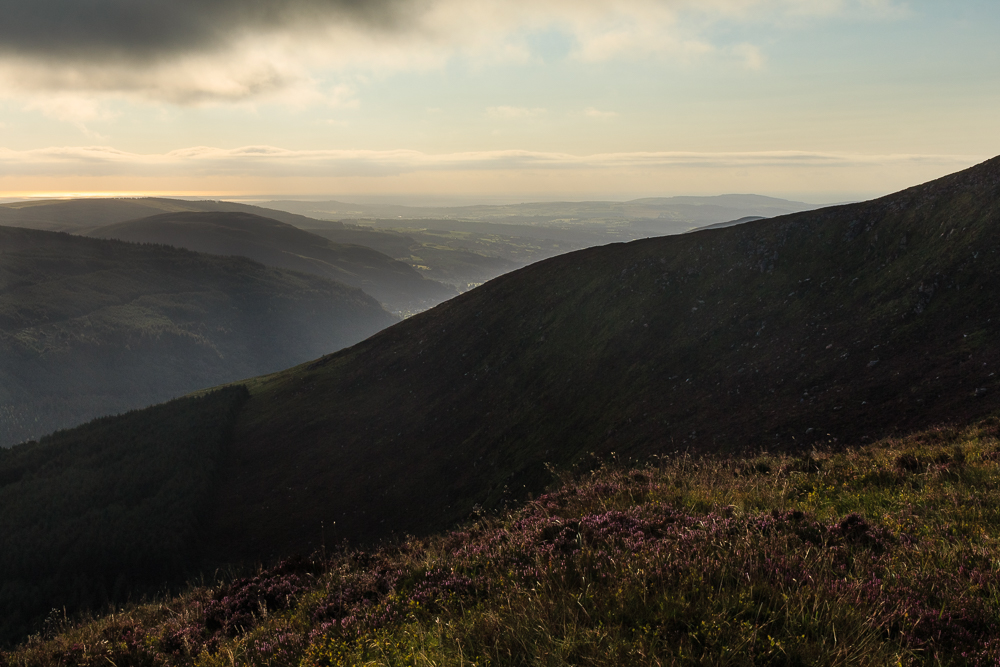 Looking east, with a sliver of sea on the horizon. 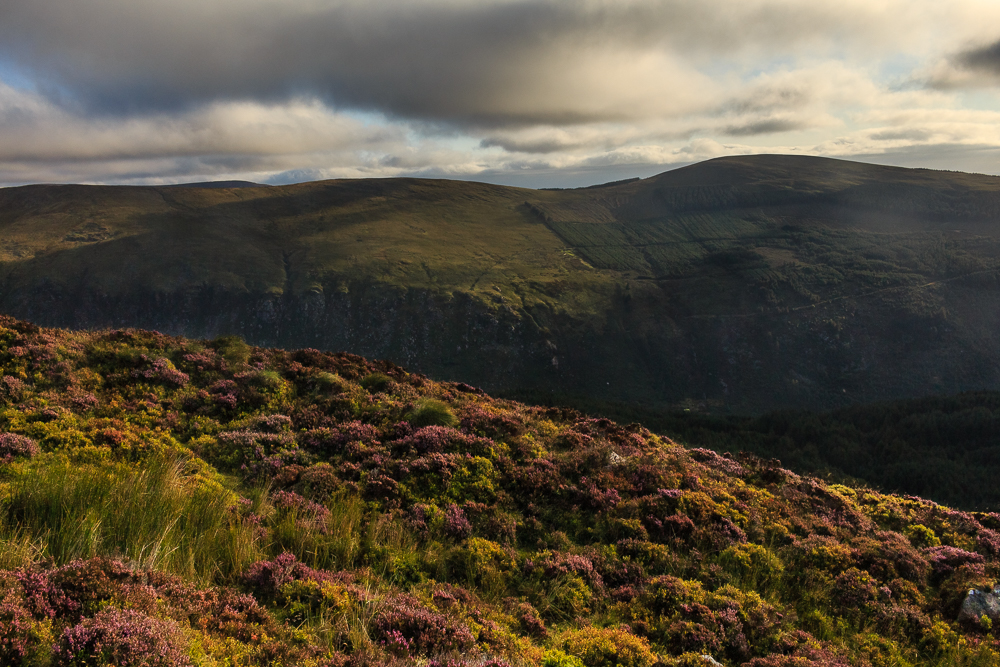 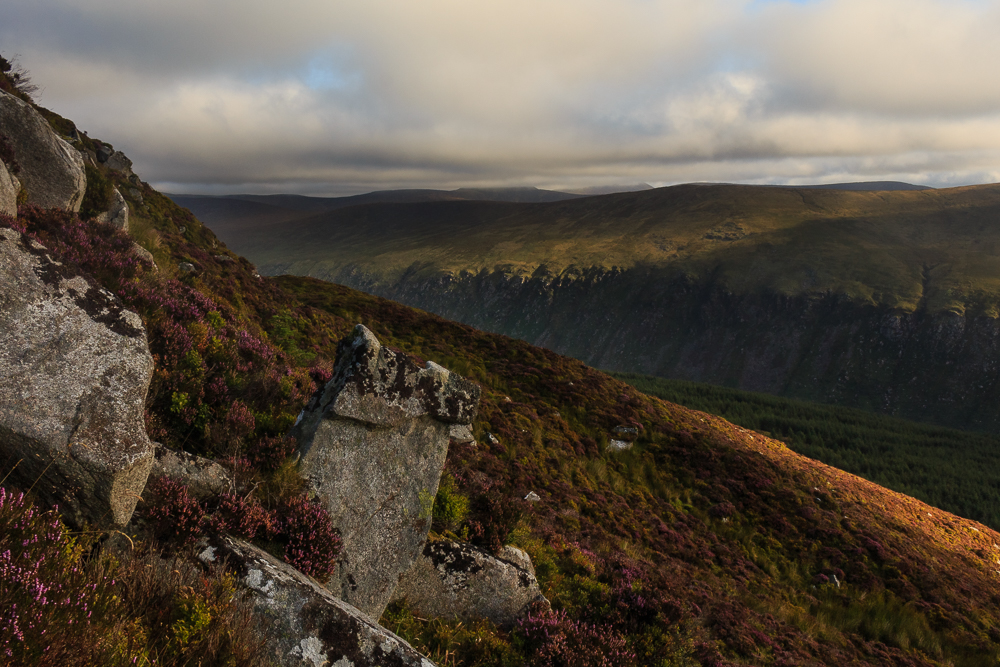 Increasingly cloudy in the distance and overhead. 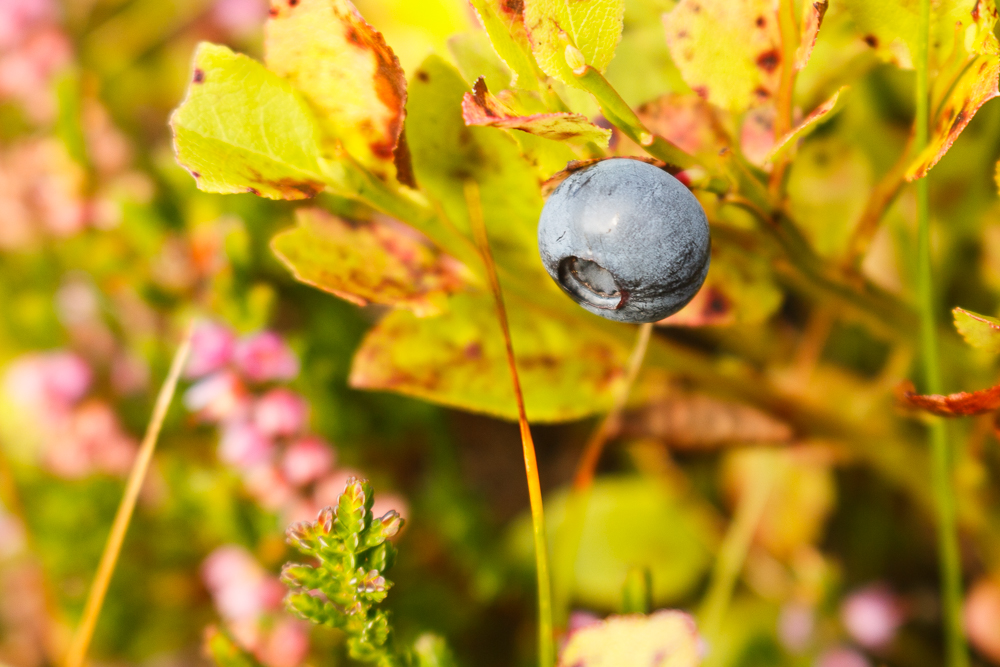 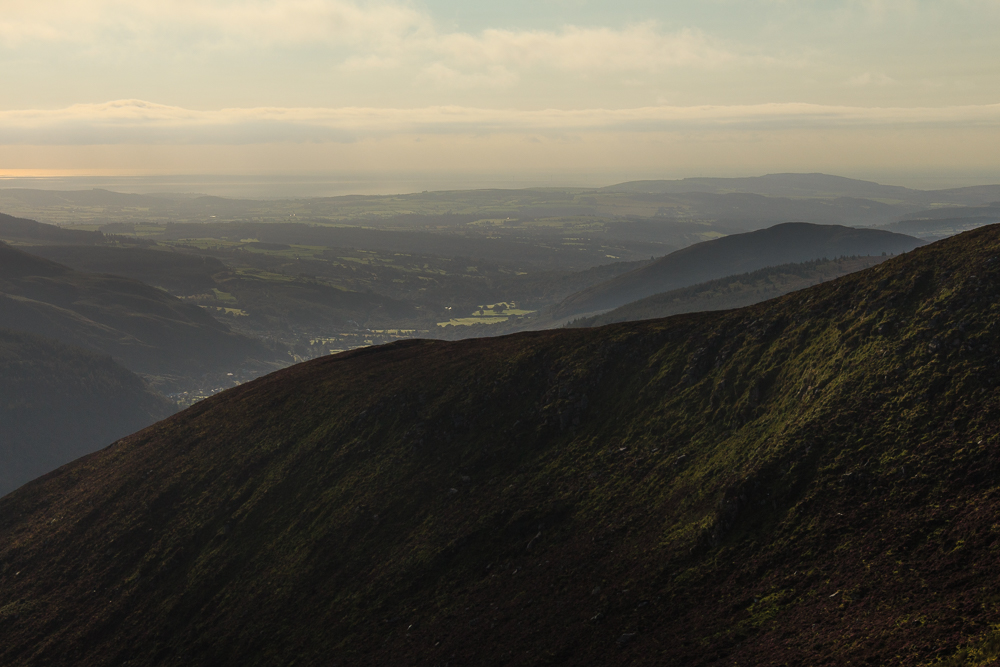 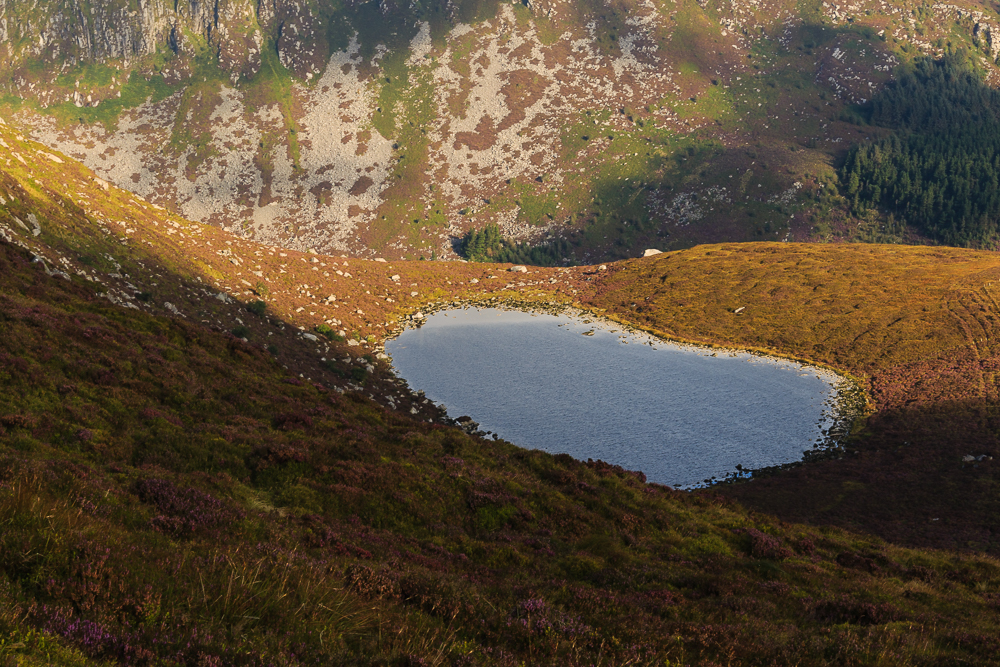 Arts Lough from above, near the top of the steep section. 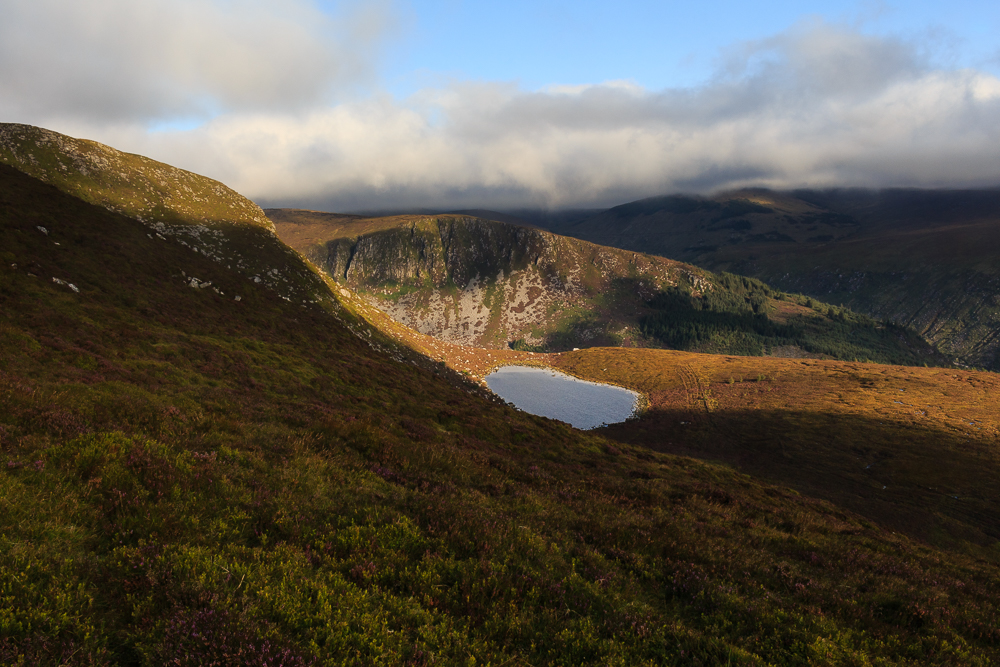 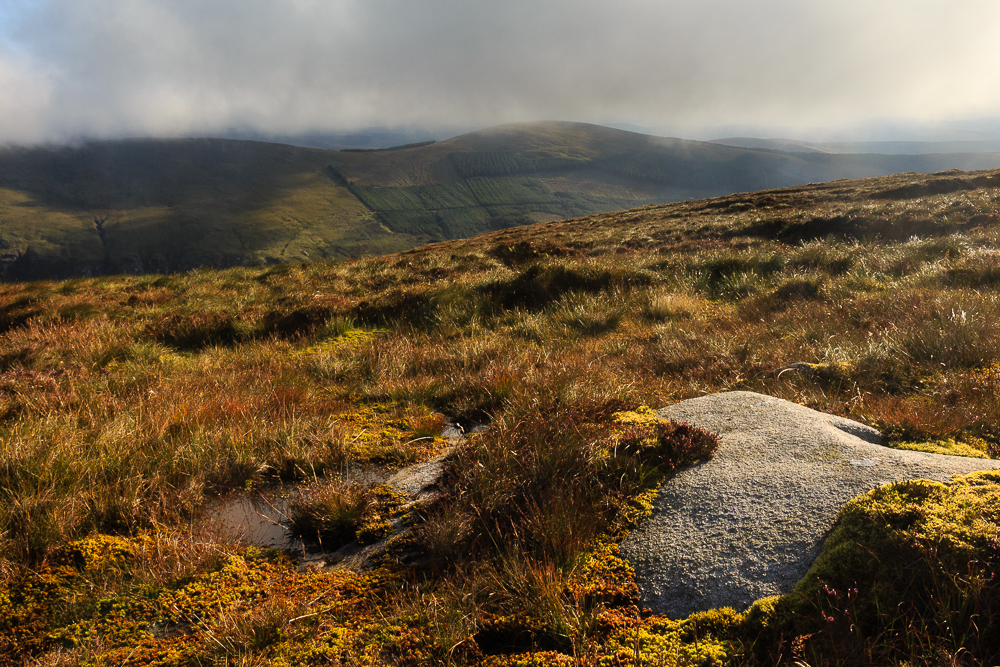 Cloud beginning to descend on the summits on the far, northern side of Glenmalure. 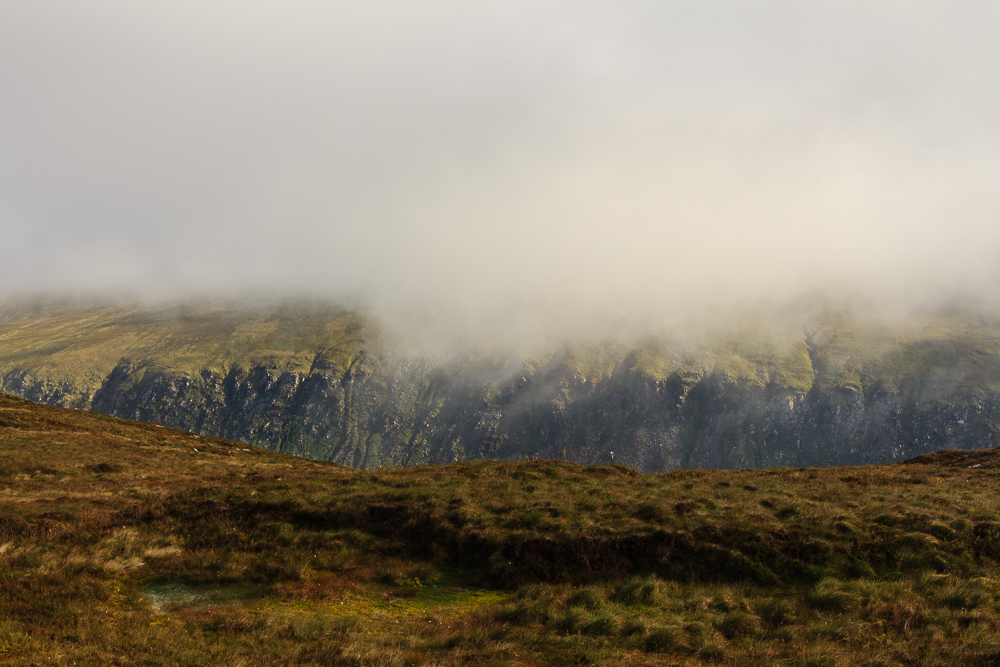 Within minutes, the tops of the mountains were completely hidden. 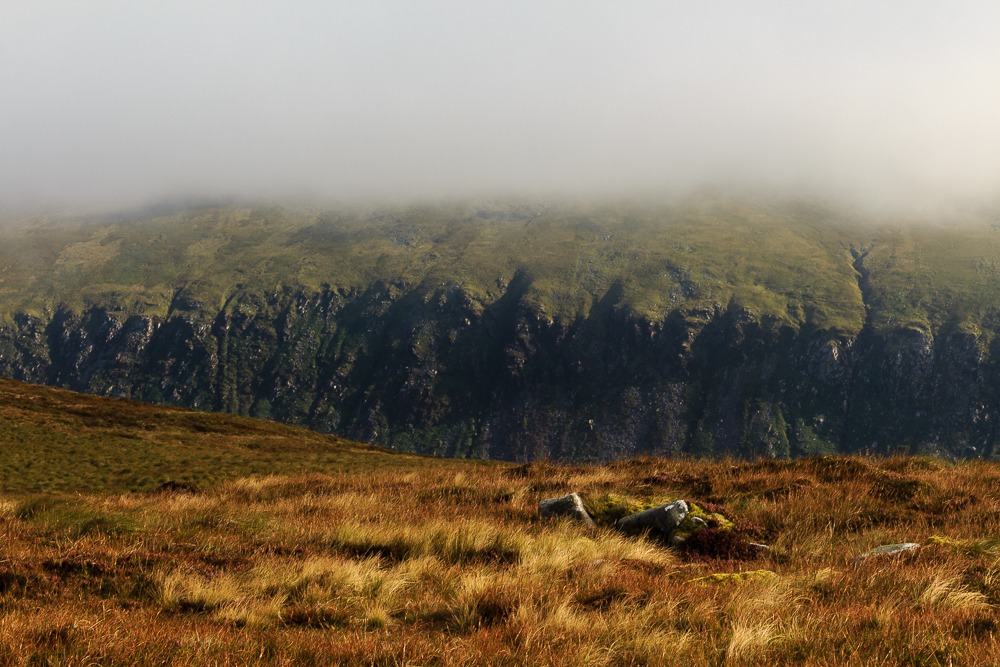 Having put the steep slopes on the northern side of Cloghernagh behind me, I was now on the gentler slopes below the broad, rounded summit.  Unfortunately, the surrounding clouds had put an end to the nice light and good views I had been enjoying. 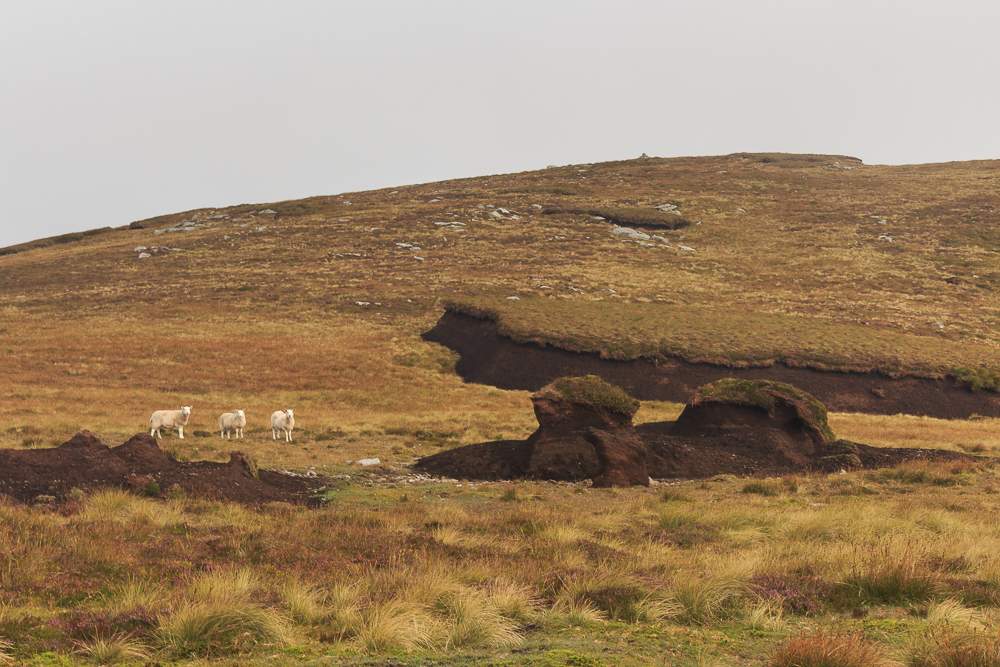 Looking up towards the summit of Cloghernagh in greyer conditions.

By the time I reached the summit cairn, I was well enveloped in clouds and the views had completely vanished. 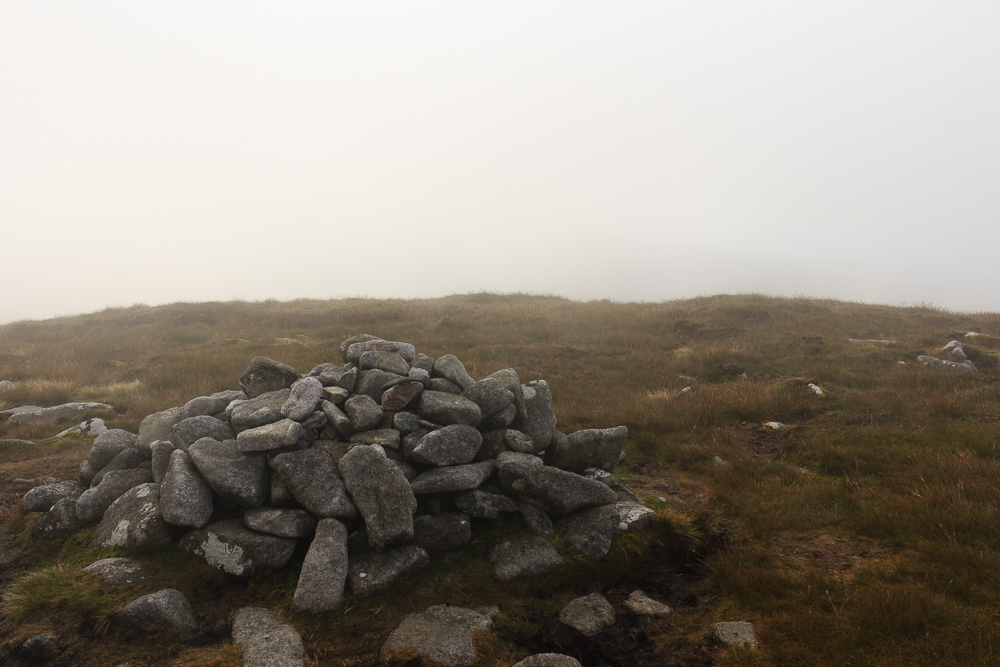 At the summit of Cloghernagh, but no views alas.

On most days out walking, an 800 metre summit might be the high point, but today, Cloghernagh was just a stepping stone on the way to the even higher Lugnaquilla.  I couldn’t see it in fog, but I knew which direction to head, and set off for my second summit.  The cloud was by now so thick that there were no views beyond a few metres, and I didn’t take another photo on the way, until I’d reached the top of Lugnaquilla.  It was an easy walk with just a gentle slope to ascend, the rise spread over 2 km or so, although in the featureless terrain and thick cloud, I was again glad of the GPS.  Just a few metres short of it, the cairn with the trig pillar on top seemed to suddenly appear out of the mist. 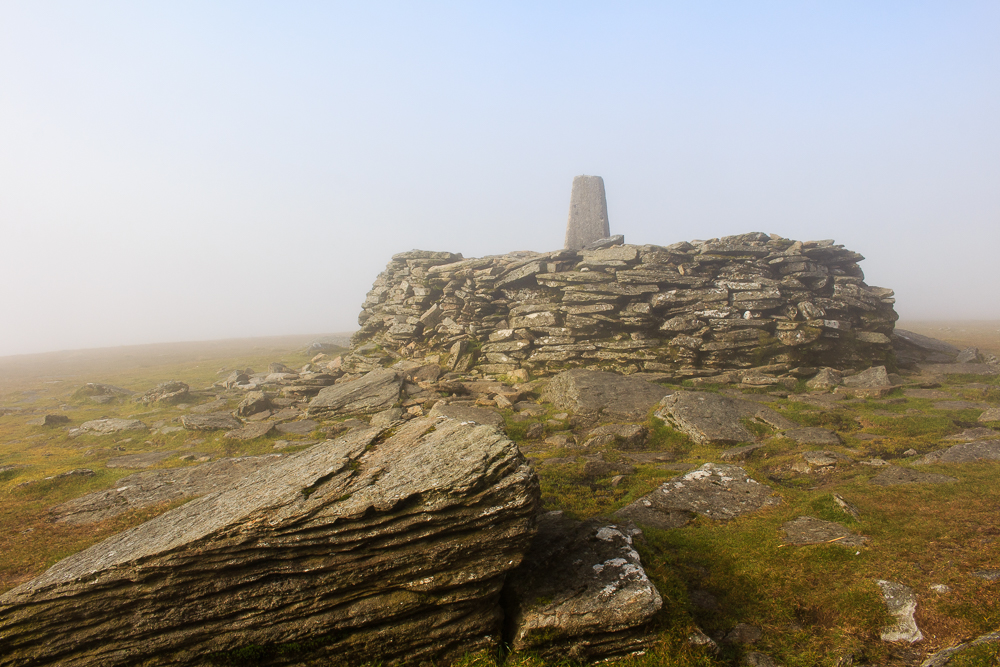 The cairn and trig pillar on the summit of Lugnaquilla.

At this height, I must have been close to emerging above the cloud layer,  and as can be seen in the above photo, some faint blue colour began to appear in the sky.  But, it was short-lived, and the murk soon closed in again.  I took a wander round the summit area, seeing the cairn from different angles and having a look at the direction indicator plaque set in concrete near the cairn. 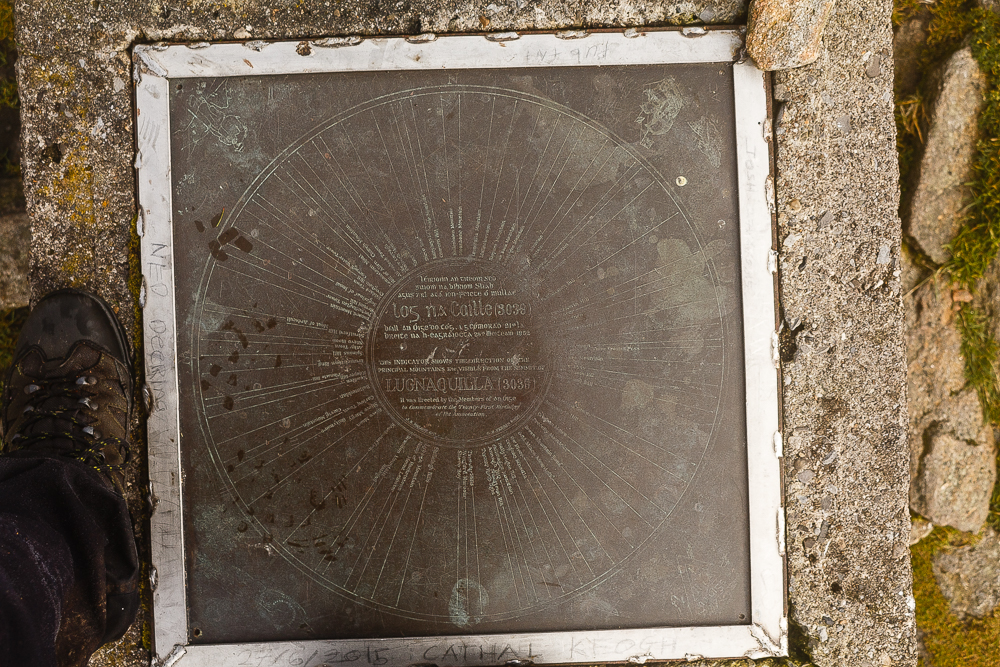 The direction indicator (including my boot) from above.  Standing on the concrete housing was the only way I could get it all in the frame. 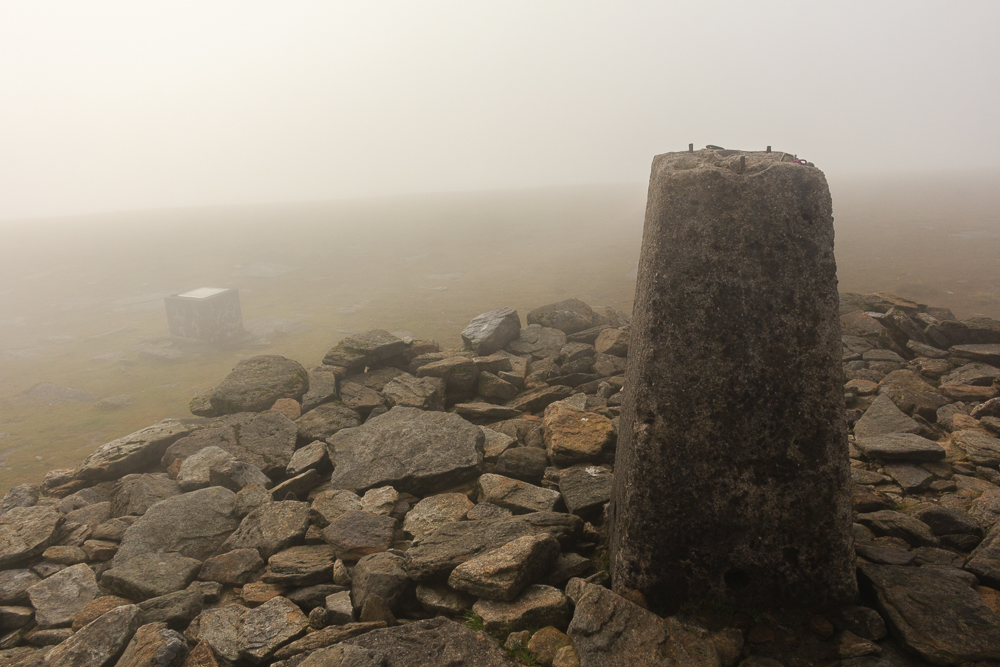 The murk soon closed in again.  The direction plaque is in the background on the left.

There are sometimes hazards to be negotiated in the mountains, but there was a new one in this area – part of the mountain lies inside an army artillery range!  A large warning sign pointed out the dangers. 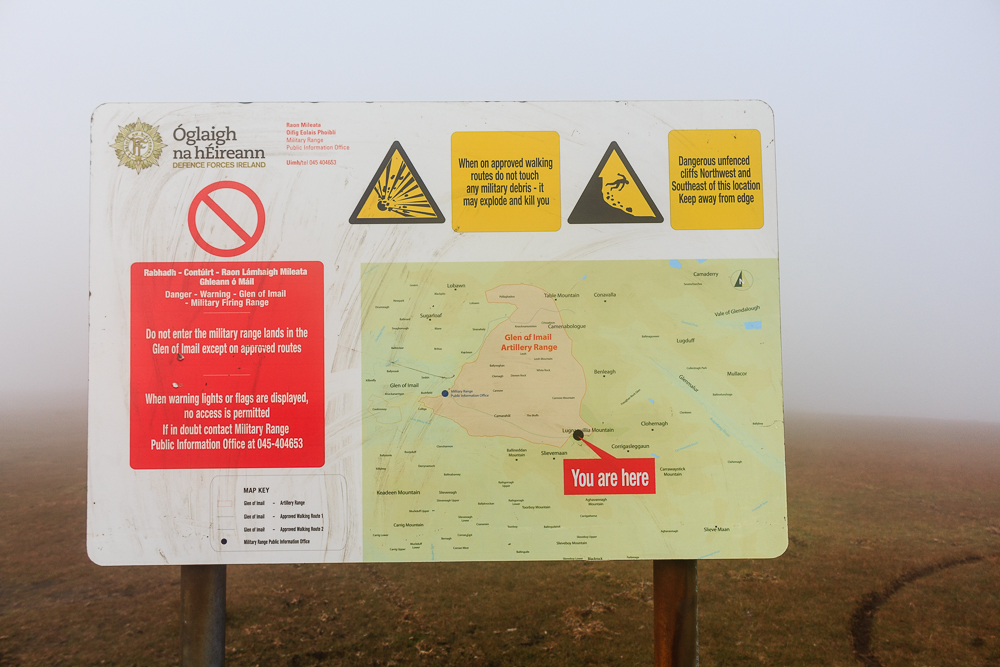 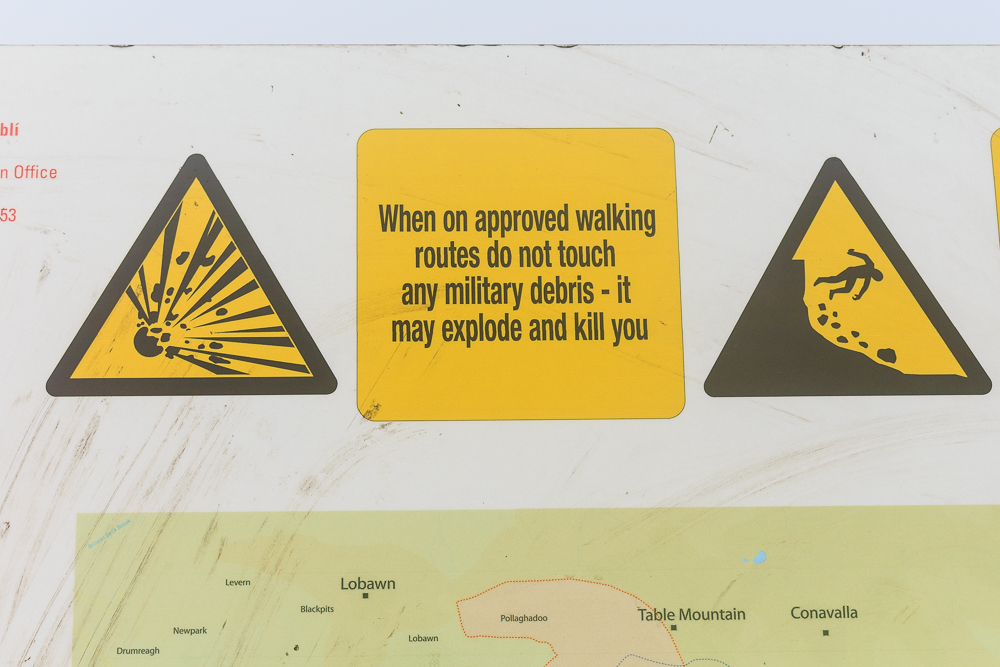 Fortunately, it is only a hazard on some of the other approaches to the summit, and wouldn’t effect me today. 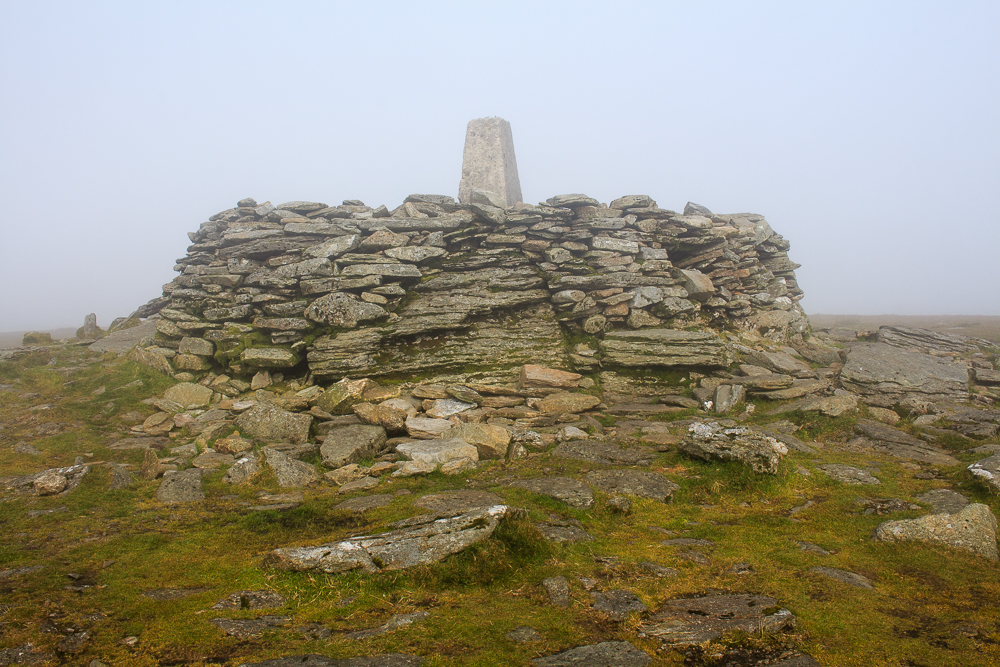 Another look at the cairn, and in the thick cloud there wasn’t really much reason to linger any longer.  I was delighted to have reached my third of the four provincial tops, but there was little to see now, and I turned to retrace my steps towards Cloghernagh.  It had been my intention to consider a diversion on the way back, swinging south to take in Corrigasleggaun, depending on weather and my own level of tiredness.  At this point there didn’t seem to be much point, but as I continued on my way, I was content with the days walking so far.

6 thoughts on “Lugnaquilla Part 1: To The Summit Via Cloghernagh”