My last post was on from a walk up Croaghmuckros in Co. Donegal, a walk which was an unplanned bonus at the end of what was intended to be just a mini road trip along the coast between Donegal Town and Muckross Head.  My plan was to visit some of the little nook and crannies along the coast that I hadn’t been to before, ignoring places like Mountcharles, Killybegs and Fintragh Bay that I was already familiar with.  The ultimate aim was Muckross Head, but there were a few beaches and other spots along the way on my list of stopping points.  I could cruise along at my leisure, take whatever diversions I wanted, and change my plans anytime depending on what I found.

One of the main reasons I was taking a road trip rather than heading for the hills or mountains was the spell of miserably wet weather we’d been having, so as I left Co Tyrone and entered Donegal on a minor road near the Bluestacks, I was pleasantly surprised by the sunshine, although the sky still showed the potential for trouble.

Sunshine, but a dusting of snow on the Bluestacks, and a sky with the potential for rain.

Barnes Gap ahead, my way through the Bluestacks to Donegal Town.

With nothing set in stone and no fixed timetable, after passing Donegal Town, I broke my first rule straight away by visiting a beach I have been to before several times.  I’ve never been able to find out if it has a name, but its not far off the N56, just outside Donegal Town, beside Donegal Rugby Club.  On the short road in, I stopped for a shot along the estuary. 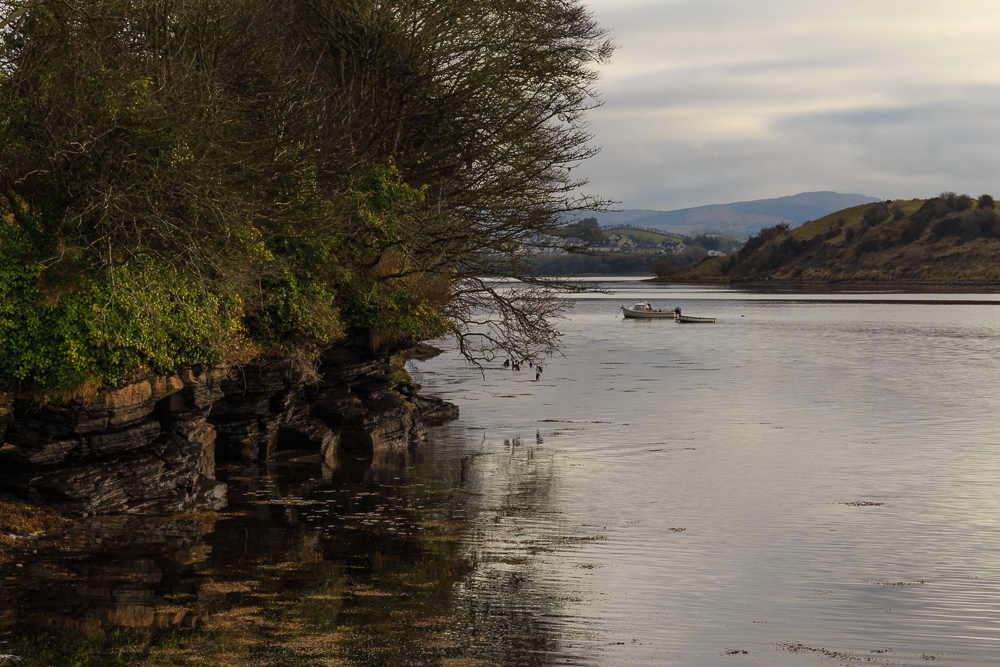 Alongside the estuary just outside Donegal Town.

My first beach of the day, and there was still a lot of cloud around. 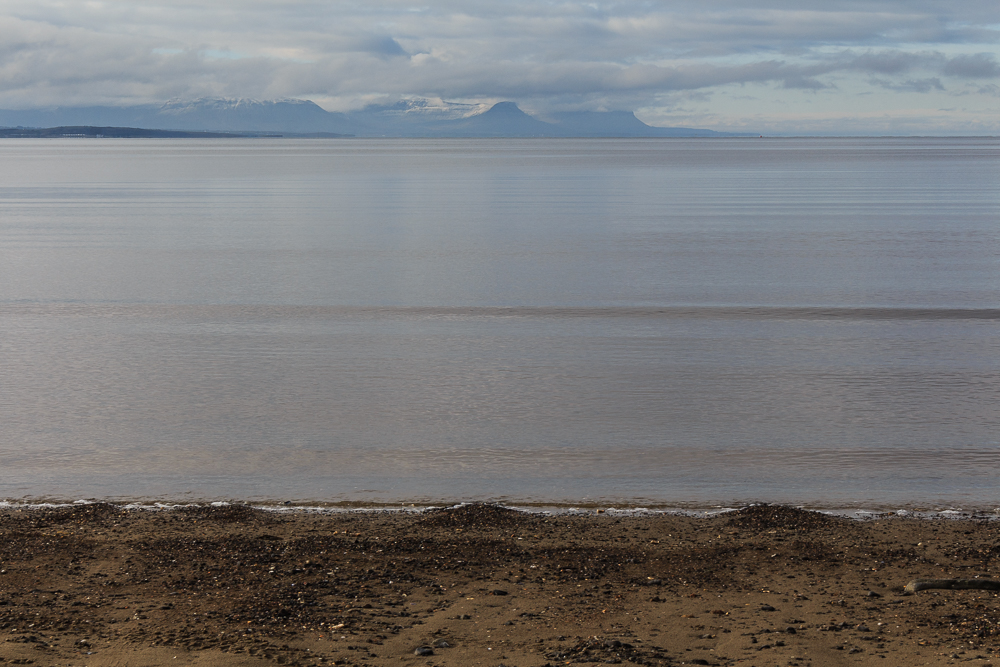 The Dartry Mountains in the distance.  They would be a prominent sight all along this part of the coastline, especially later on the summit of Croaghmuckros.

There were glimpses of blue sky.

Making my way back out to the main road, I stopped before reaching it along the shore of the estuary where the River Eske flows into Donegal Bay. 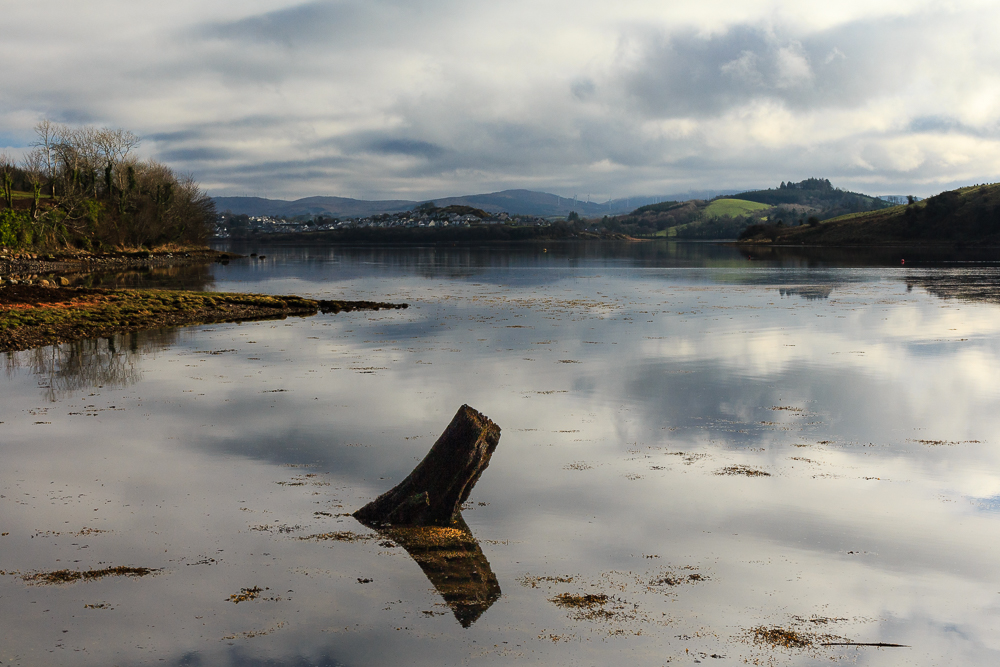 I was enjoying the leisurely pace and freedom to stop whenever something caught my eye, and I hadn’t gone far after rejoining the main road before stopping again on the shore of Donegal Bay at a small slipway. 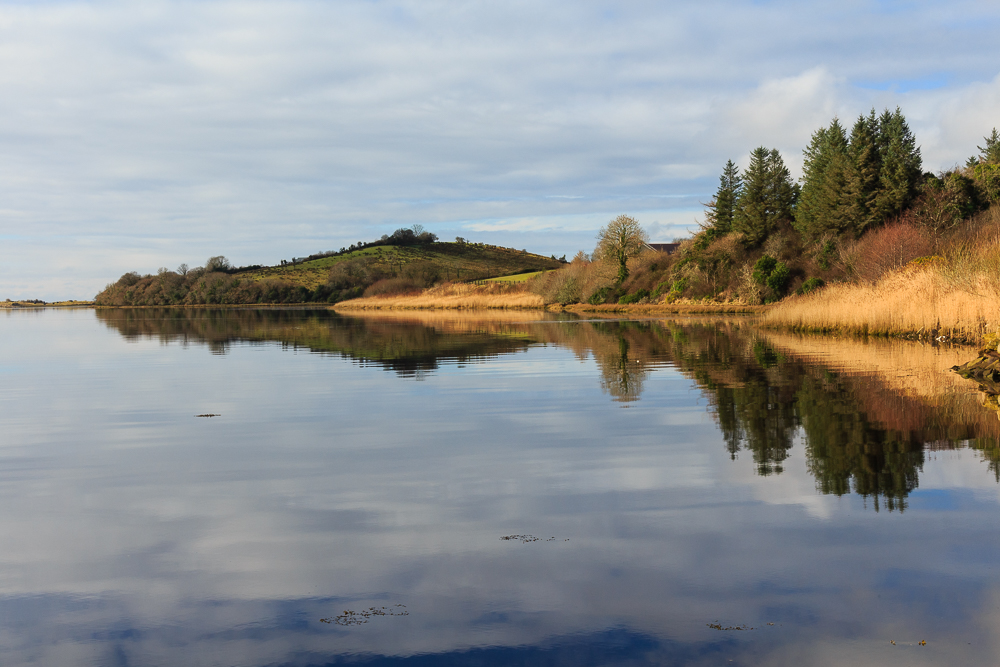 It was developing into a really nice morning now.

Next stop was a new location to me, at one end of a beach which continues a little way west to the village of Inver. 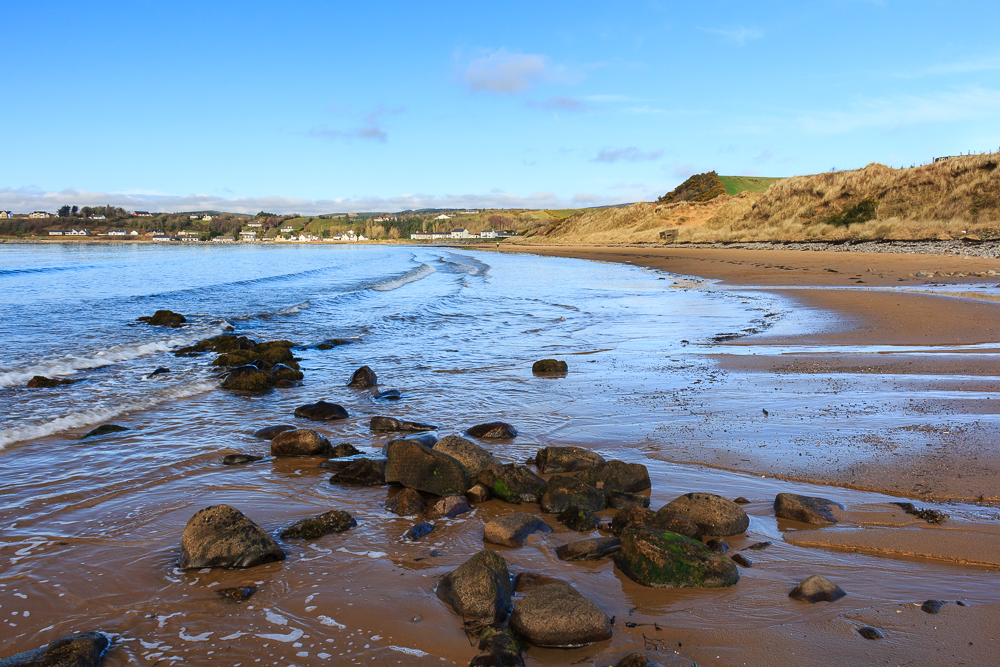 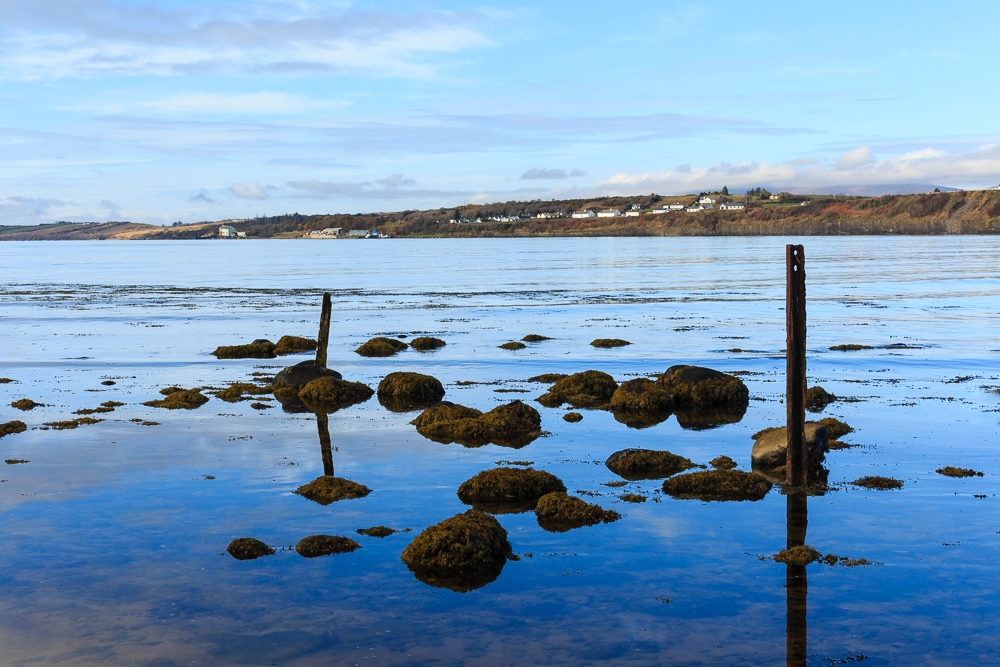 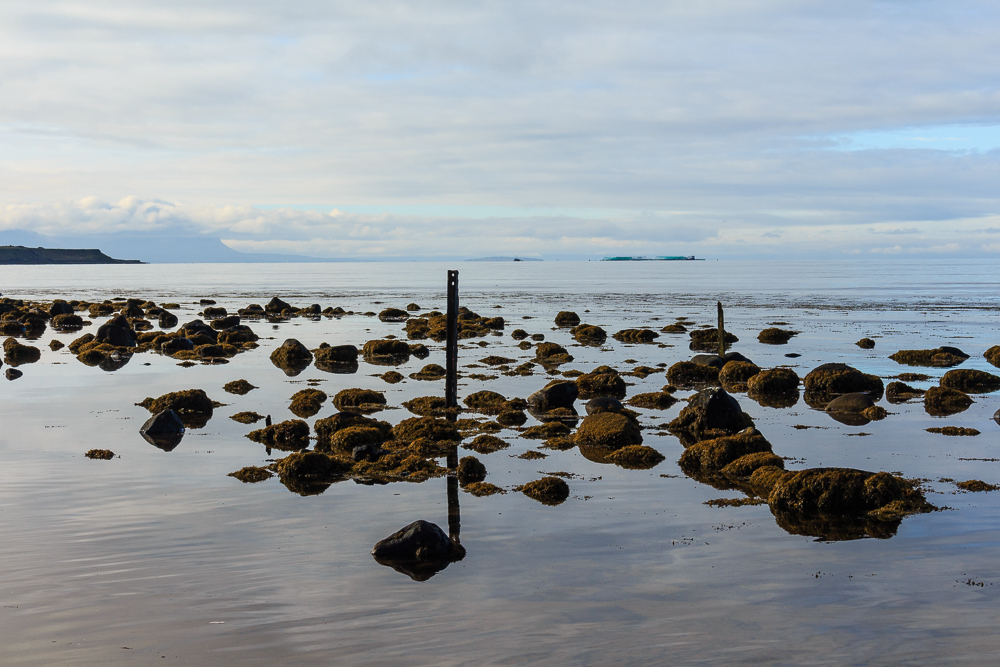 My last stop this side of Killybegs was at a pier near the village of Bruckless, again, a short way down a narrow side road. 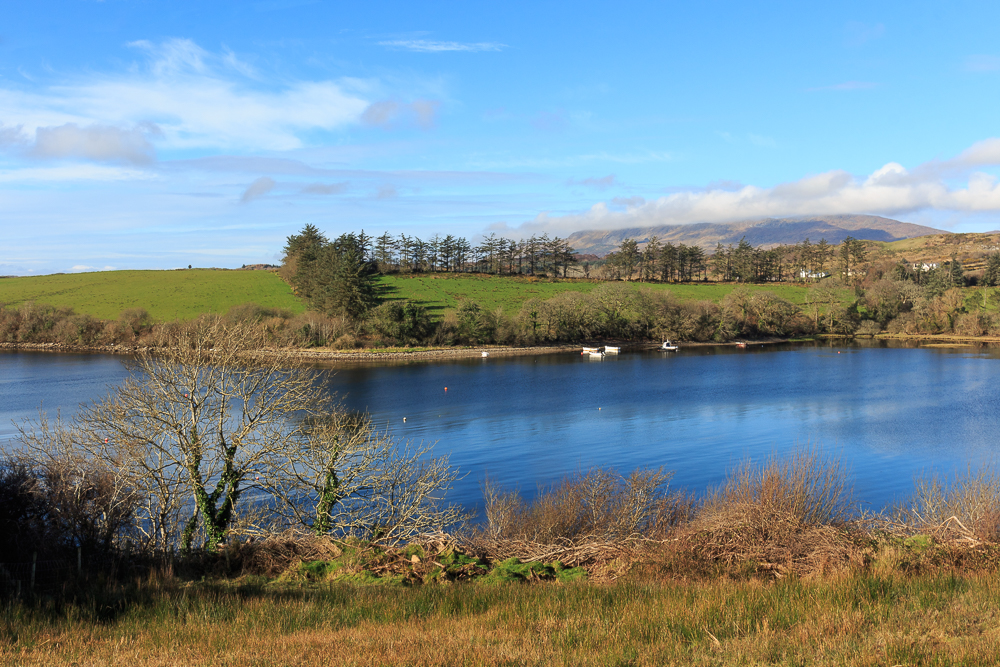 On the road down to the pier. 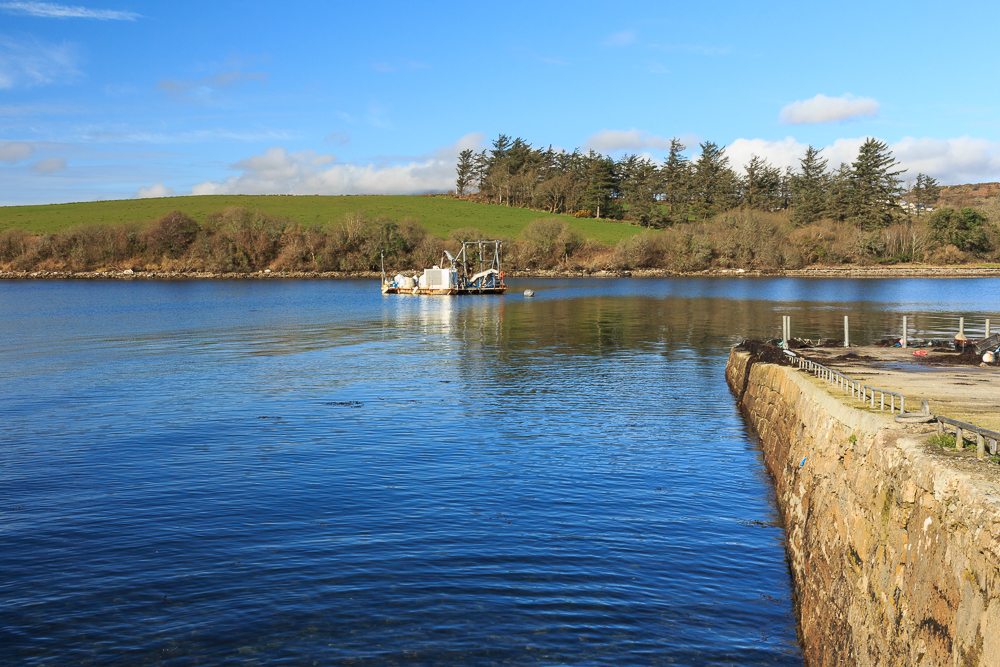 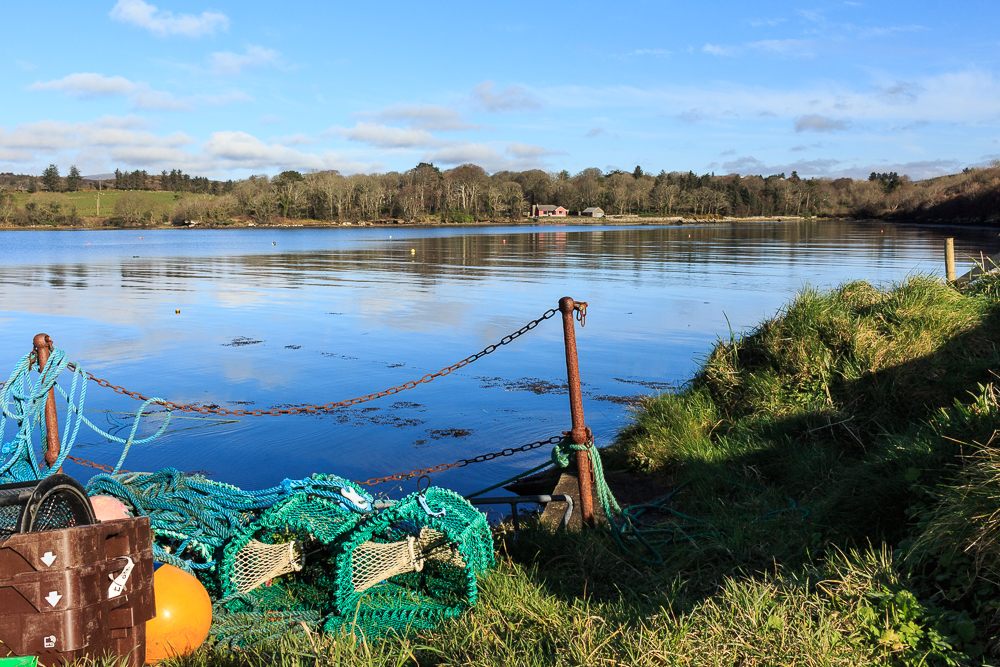