We’ve been having a lot of wet weather recently, and not the kind of stormy weather that comes with dramatic skies, but instead, just relentless rain with flat, grey, featureless skies.  As a result, expecting more of the same on Sunday due to an unpromising weather forecast, instead of hill walking, I decided to take a mini road trip through Donegal Town to Muckros Head via Killybegs.  My plan was to stop at a few beaches that I knew about but hadn’t visited yet, in the hope that I could leave the shelter of the car in any brief interludes in the rain for a few quick photos.

As I set off, the forecast was proving correct, with plenty of rain, but by the time I reached Donegal Town, it had unexpectedly cleared up, and soon turned into a beautiful morning.  I had a great time stopping at several beaches and piers along the route, by-passing those I was already familiar with, until finally I reached Muckros Head.  This is a fantastic spot, and I’ll do a further post from it and some of the other places I’d stopped at along the way.  The views of the surrounding hills and mountains however, began to make me reconsider the decision to give the hill walking a miss.  Slieve League looked stunning across an inlet of the sea, but I’ve been up it recently, and it would also be a longer walk than I now had time for.  Equally attractive looking however, was Croaghmuckros.  It was also nearby, would be a quick walk as it has an access track on the northern side to the mast at the summit, and is a small hill at 275 metres.  Despite its lack of height, it is fairly well separated from other hills, and its coastal location promised great views.  Having had a good wander round Muckros Head, I set off in the car for the northern side of the hill where the access track started near the village of Kilcar.

Slieve League, one of the tempting options as I looked across from Muckros Head.

Croaghmuckros won out however, as I hadn’t climbed it before, and it suited the short time I would have available.

Another view of Croaghmuckros from Muckros Head.  It seemed to have a presence beyond that expected for a hill its size, helped by its coastal location and rugged slopes.

I easily found the start of the access track on a narrow road on the fringes of Kilcar, and it offered a clear and easy route to the summit after I parked the car and began the walk up.

Starting out along the track.

An abandoned and ruined digger near the start of the track.

As I made my way up, my eyes were initially drawn repeatedly to nearby Crownarad, or Cruach na Rad. 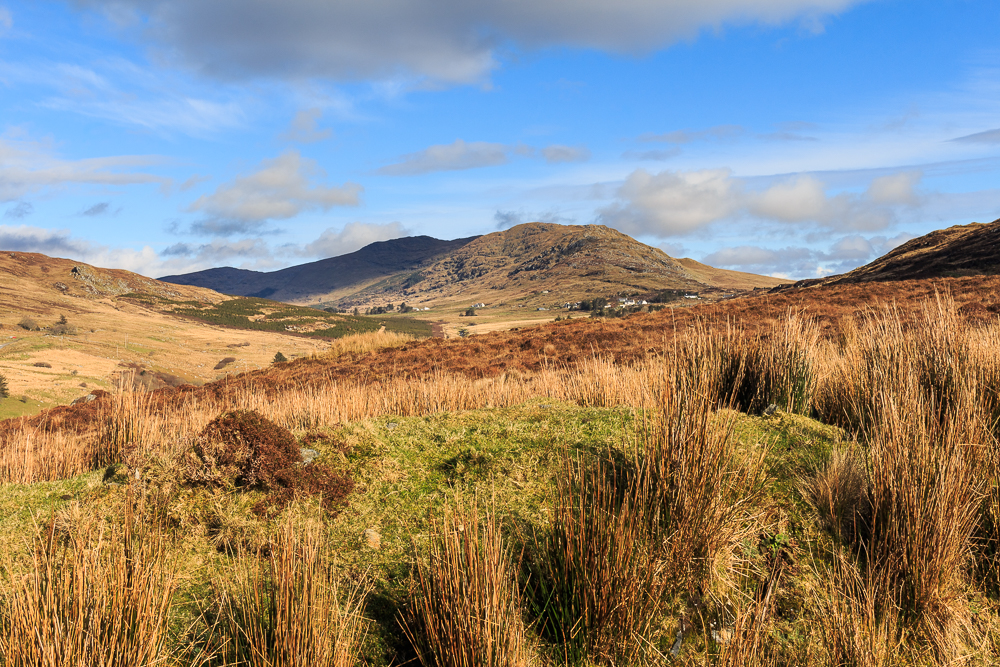 Looking towards Crownarad.  It dominated my views for a good part of the walk up. 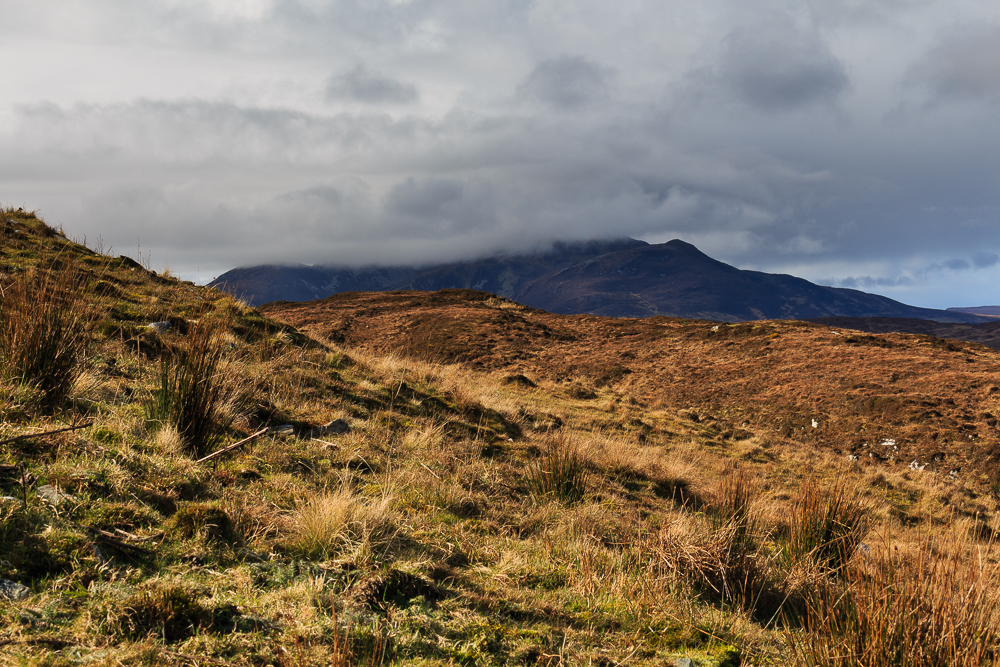 I was also getting views of a moody looking Slieve League, capped by cloud.

As the track began to zig-zag up a steeper part of the hillside, I caught up to two fellow walkers who had been ahead of me until now.  Although I’m normally a solo walker, mainly because my diversions and frequent stops for photography would drive anyone else mad, it is nice to meet other walkers and I stopped for a chat with them.  I would usually take my leave after exchanging a few pleasantries, but these two proved to be excellent company – friendly, entertaining and interesting, and I ended up walking with them for the rest of the way to the summit.  Tom and Eunan turned out to be keen hill walkers, who lived locally, and are members of the Sliabh Liag Walkers.  They really added to my enjoyment of the the walk, being full of information on other hills in the area, and the landscape we were gazing down upon, as we swapped stories of mountains we had climbed, and those we were planning to visit.  It would be great to meet them in the mountains again some day.

Crownarad again – it just seemed to keep capturing my attention.  I definitely plan to return and walk it too.

Erratic boulders at the side of the track. 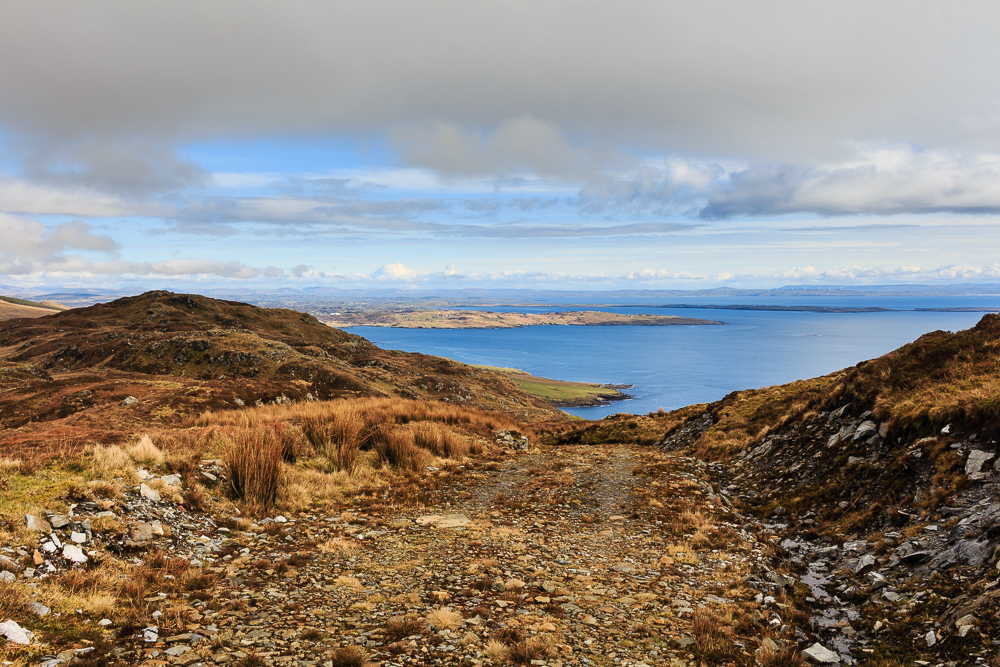 Getting close to the top, and looking back along the track as views began to open up over Donegal Bay.

Soon, we were cresting the hill and stepping on to the summit, marked by a small cairn.  One of the advantages of arriving from this side is the sudden revelation of the breathtaking views from the summit, the fact that they were previously hidden adding to their impact.  A huge expanse of coastline and the wide Donegal Bay opens up below, stretching to the Dartry Mountains on the other side.  It had been a beautiful day, almost summery until now, but there were ominous looking skies over the ocean and the Dartry Mountains.  They made the views even better, with the surface of the sea and mountains being alternatively revealed and lit up by patchy light, or hidden by trailing curtains of rain beneath the dark clouds.  The Dartry Mountains had a dusting of snow, as did some of the distant Bluestacks.  Magnificent views vied for attention in every direction – St John’s Point jutting far out into Donegal Bay, with the lighthouse shining in the sun, nearby Slieve League, and other hills and mountains stretching inland to the north and northeast. 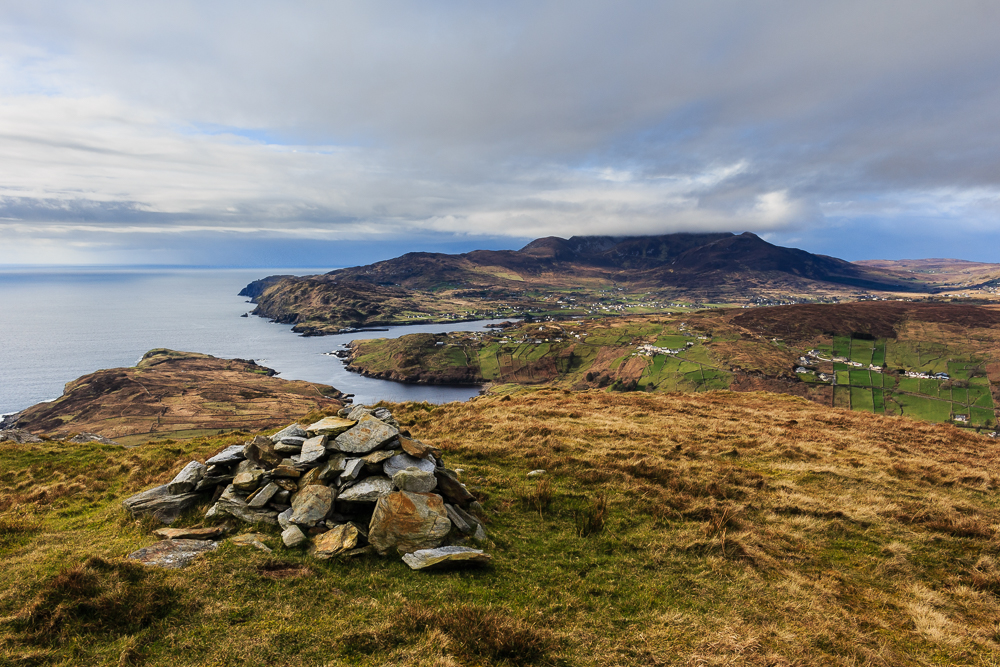 Arriving at the summit cairn, and looking towards Slieve League – still capped by cloud.

I loved the view over Muckros Head to the patchy light on the ocean surface and the stormy clouds. 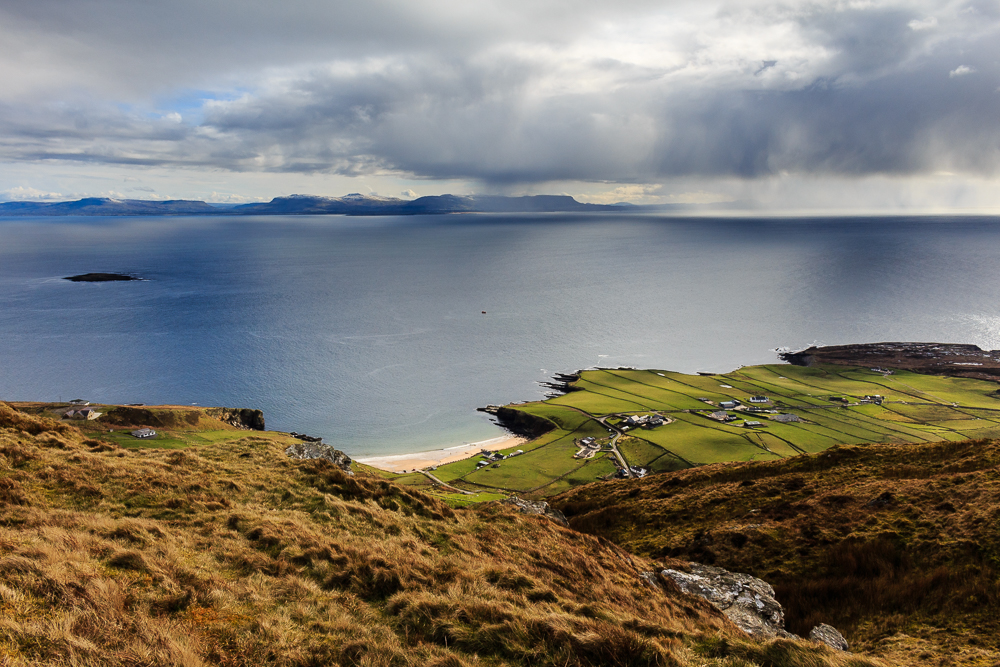 One of the beaches I had visited earlier in the day, at the base of the small Muckros Head peninsula, with the Dartry Mountains far away on the other side of Donegal Bay.

Thanks to Tom and Eunan, I was able to identify Slievetooey in the distance to the north, with a hint of a rainbow in the centre of the frame.

Zoomed in closer on the Dartry Mountains, some topped with snow. 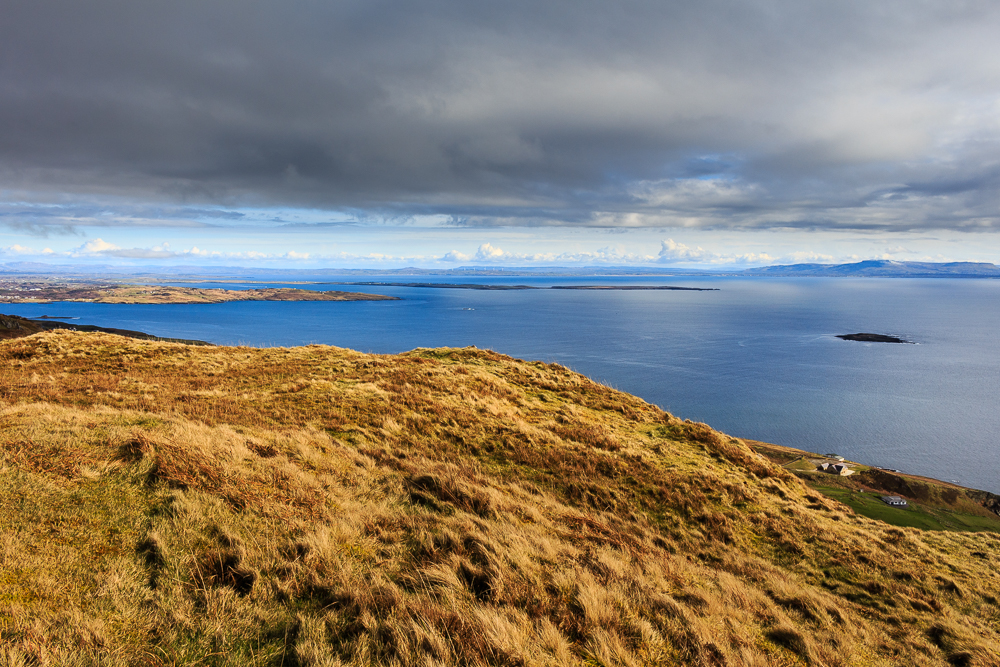 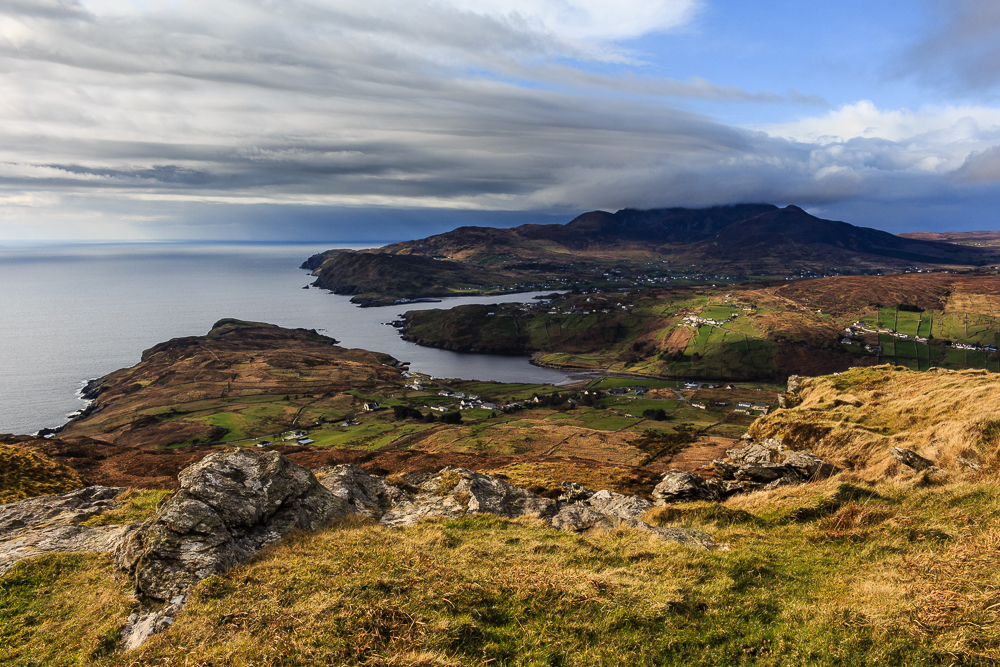 Another look towards Slieve League. 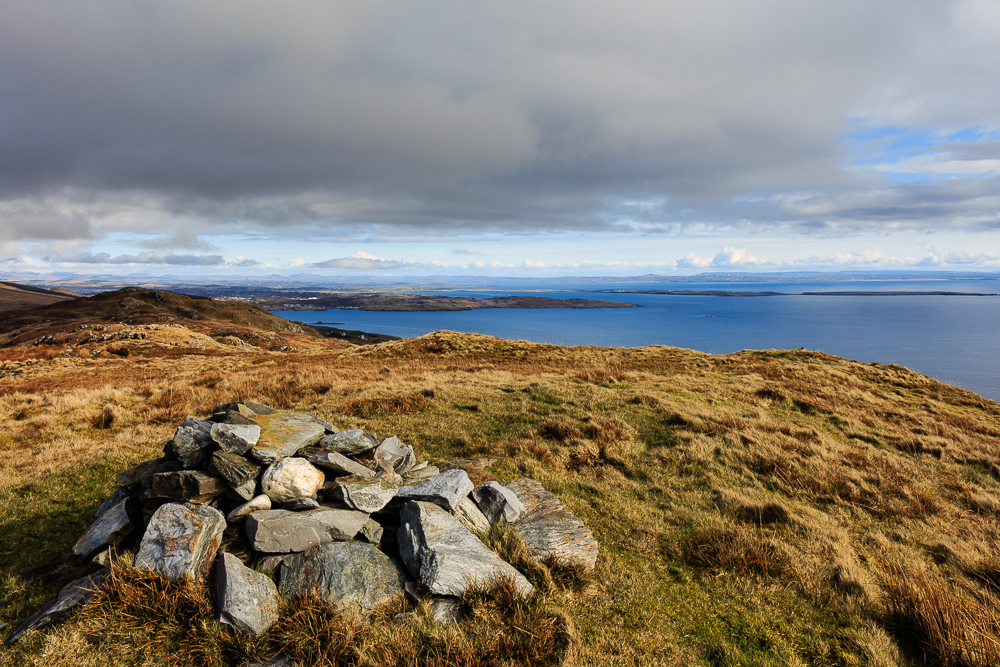 Not having planned to be doing any hill walking, my family were expecting me back fairly early, so it was time for me to start making my way back down.  I also had to part company with Tom and Eunan as they were continuing their walk along the slopes to the east. 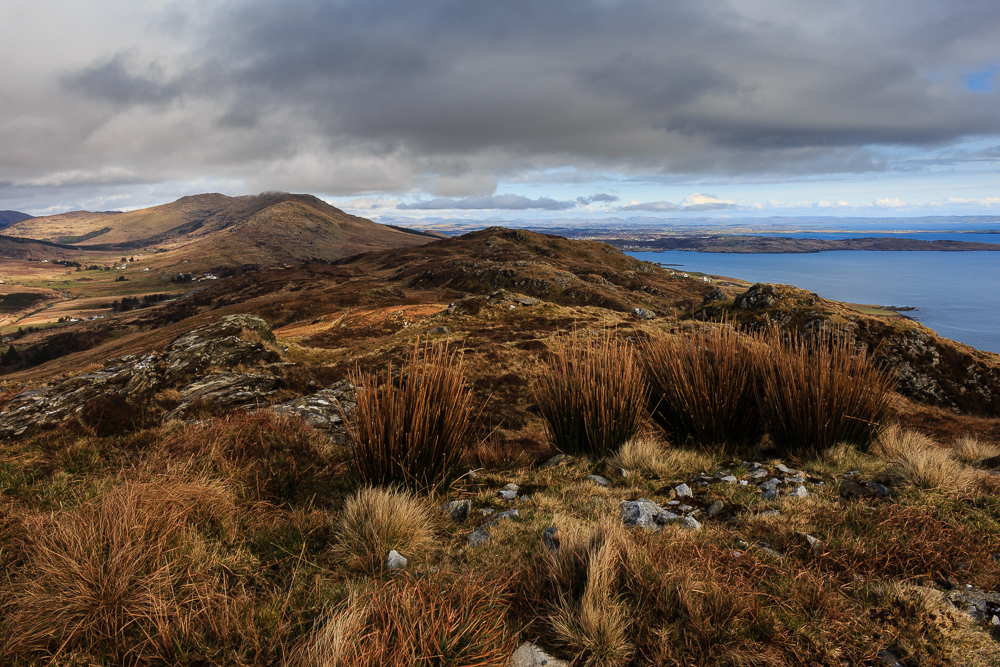 It was good timing to be heading down, as some of those stormy clouds I had seen out at sea, were now beginning to pass overhead, and I felt the first spots of rain.  It got increasingly dark and gloomy as I descended, and I had to pack the camera away a few times during short but heavy showers. 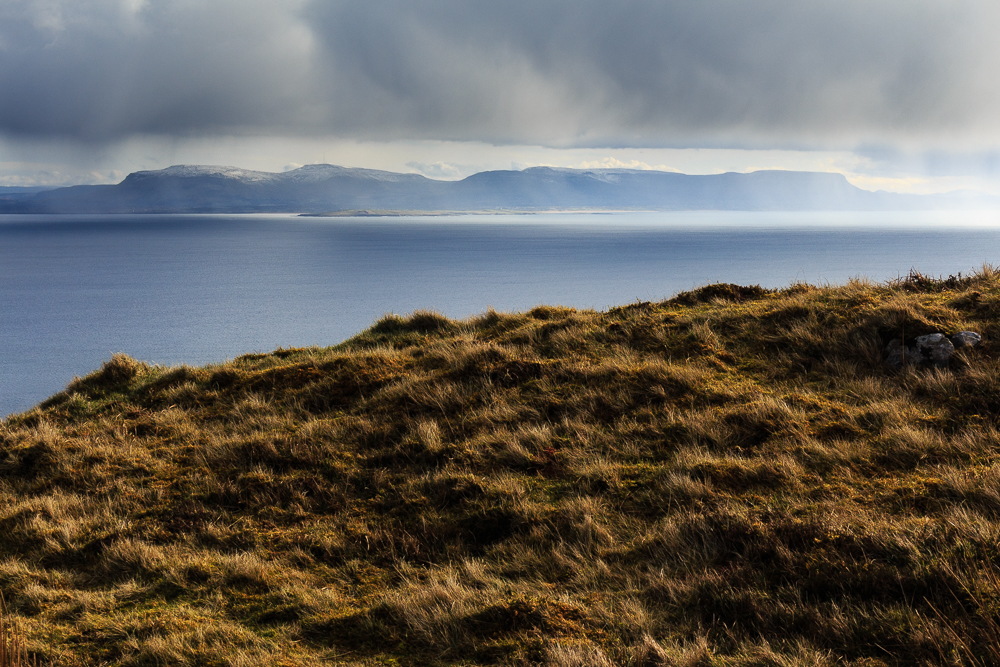 Another view of the Dartry Mountains on the way down between showers.

On the way down I turned my attention from the wider views to the fantastic colours in the rock revealed by the cutting of the track into the hillside. 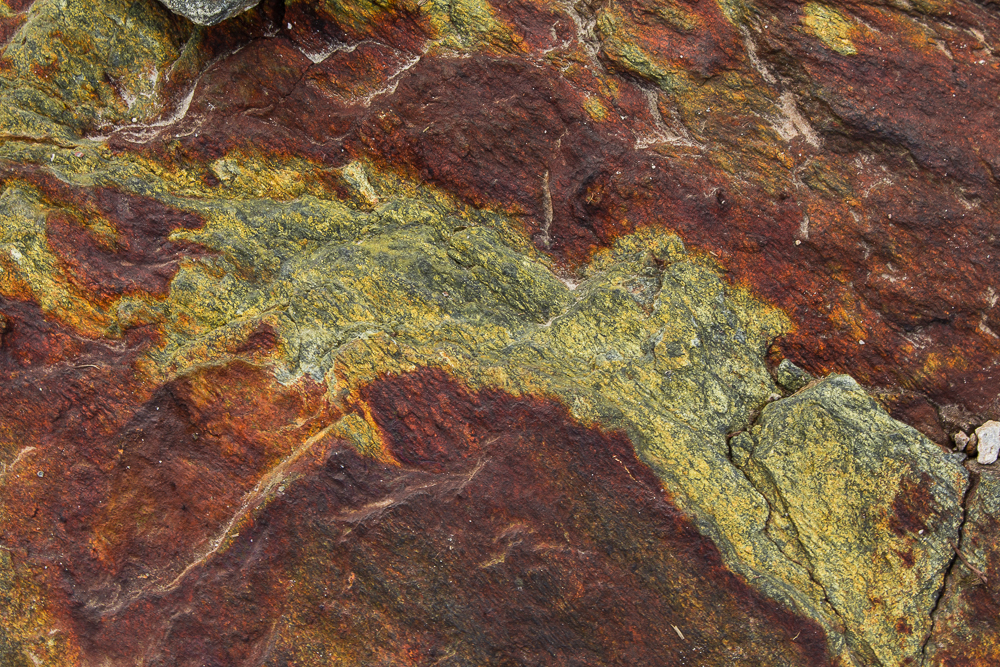 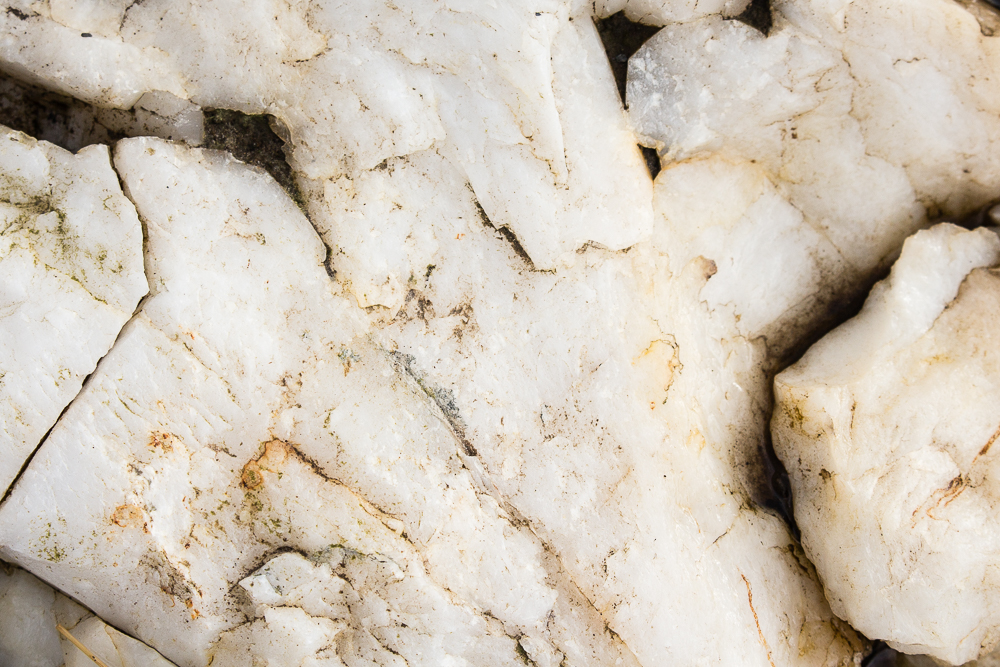 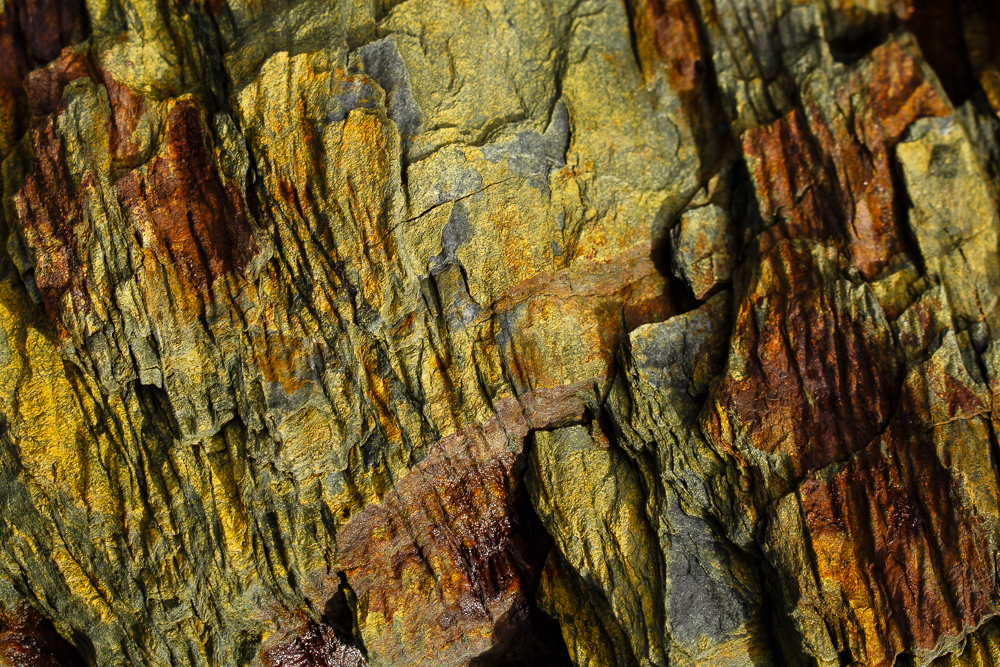 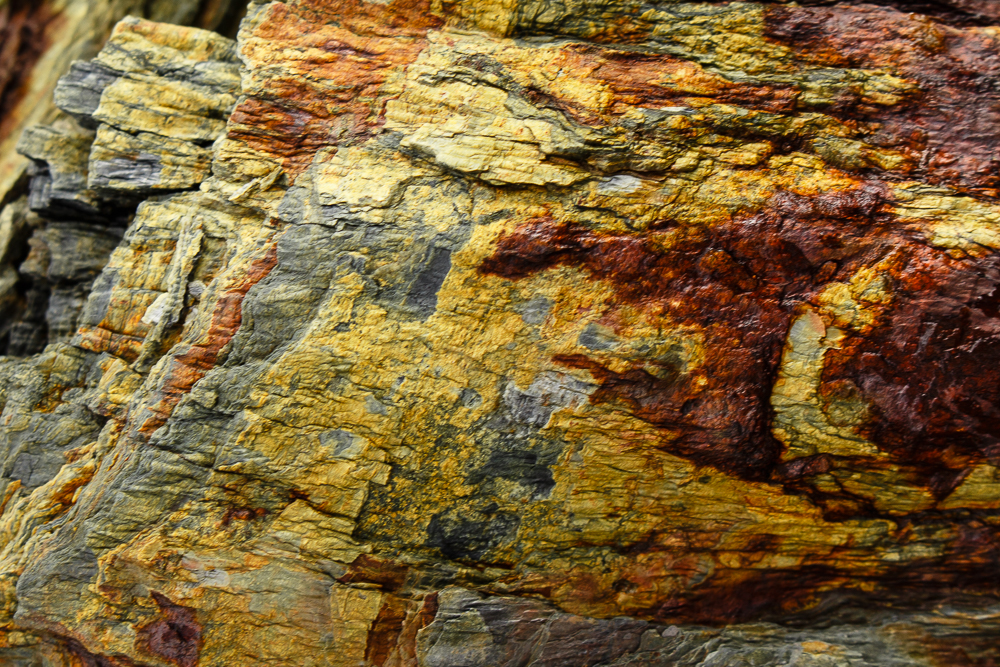 With my attention focused on the ground, I also noticed that the surface of the track for a long stretch was covered in countless fragments of sea shells.  I was intrigued but baffled as to how they got up here! 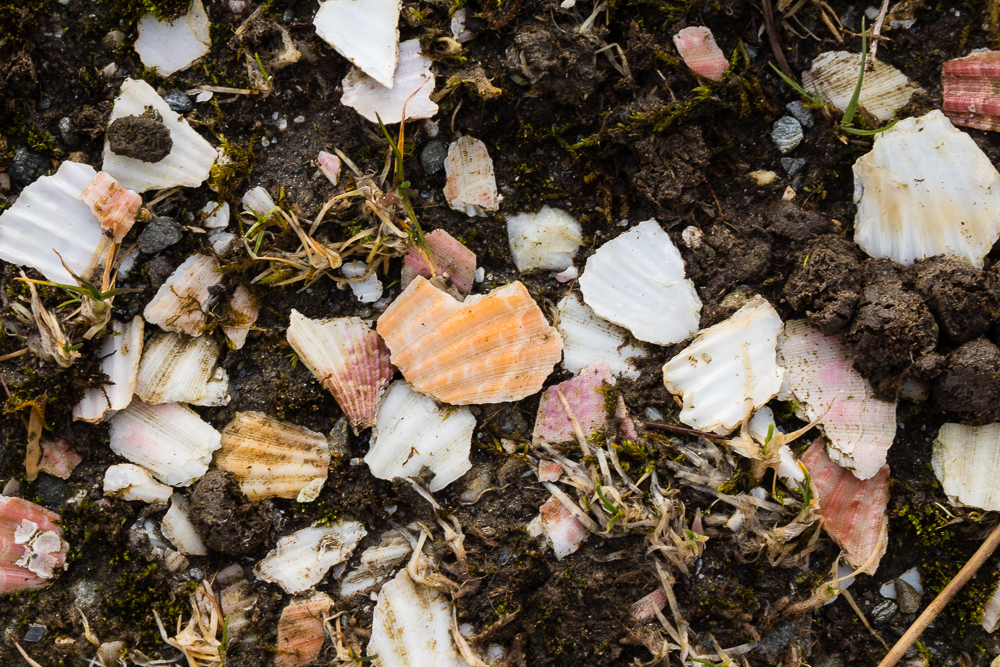 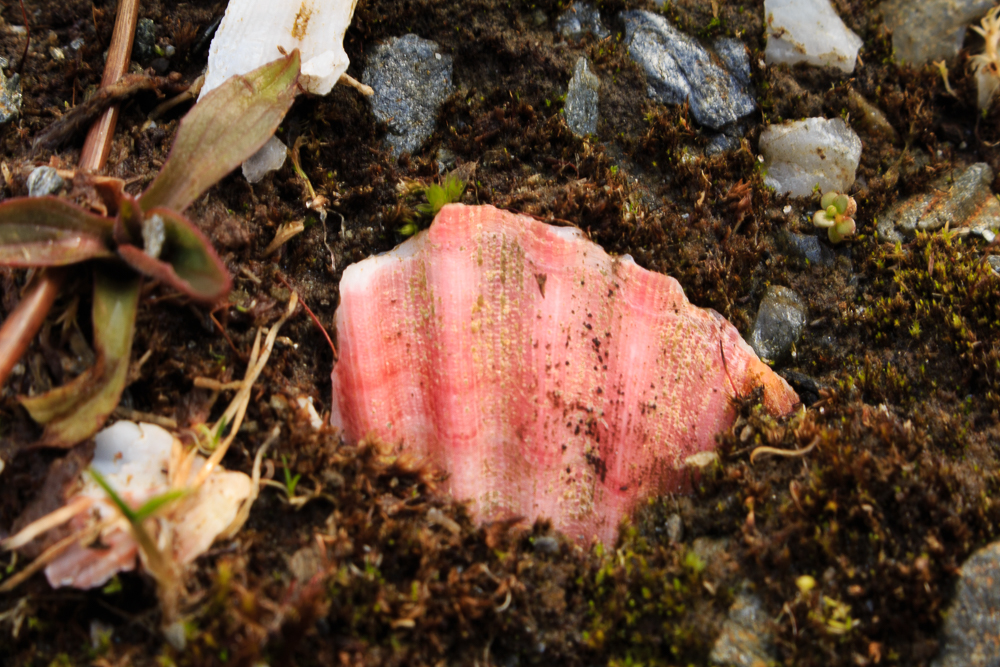 It was getting really black overhead now, and I took one last shot of the view towards Slieve League as I continued down the slopes of Croaghmuckros. 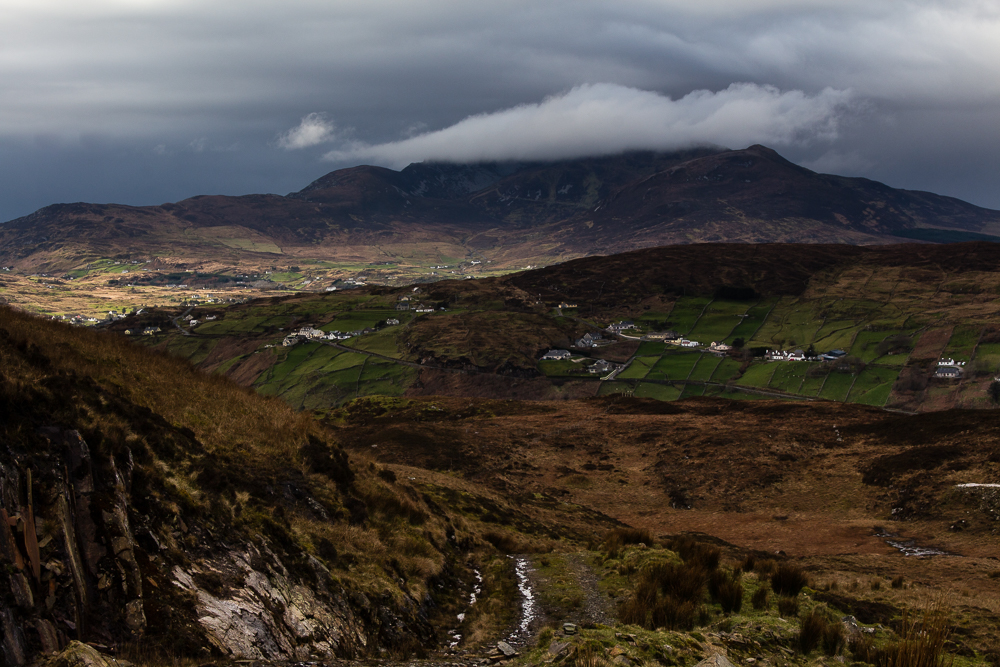 I got hit with some rain on the way down, but it wasn’t until I was almost back at the car that the clouds really opened up.  An extremely heavy downpour started just as I stepped into the car – great timing and it felt like this really had been my lucky day!  And what a great hill Croaghmuckros turned out to be on a day when I hadn’t been expecting any hill walking at all.