I am just back from a great weekend in Dublin with the family, and of course I took a load of photos.  I haven’t had a chance to process many of them yet, but I’ll post a small selection here.  Apart from photography, the main reason for the trip was to attend the mountainviews.ie annual get together.  This year, I was collecting a certificate for having completed my local 100 hills and mountains.  It was a pleasure to meet the mountainviews team again, and some of those attending as well.  In particular, I got a chance to meet in person, Martin McAlinden – a fellow blogger and hill walker who I had previously communicated with via mountainviews and our blogs.  I would strongly recommend checking out Martin’s blog for anyone interested in photography, the outdoors or travel, either in Ireland or elsewhere in the world.  (A fellow Tyrone man too!)

There were two guest speakers at the event, and a highlight of the evening for me, was not only hearing their presentations, but getting a chance to talk with both of them afterwards.  I was a huge fan of both prior to the event, and I took the chance to get some of their books signed – it was great to find them so friendly and approachable.  Gareth McCormack was first up, talking about his landscape photography, particularly in the mountains of Ireland – the subject of his recent book.  You can visit his website for more information, or to buy his stunning book.  Next up was Paul Clements, who wrote The Height Of Nonsense – a fantastic read for anyone interested in hillwalking, or who just enjoys great, humorous travel writing.  His latest book is the brilliant Wandering Ireland’s Wild Atlantic Way – another great read.  You can buy Paul’s books at his publisher’s site among other places.  Both authors were extremely gracious in taking the time to talk to me and I couldn’t recommend their books highly enough.  Amazingly, both Gareth and Paul are originally from Co Tyrone as well!

Duly inspired, I took many photos walking around Dublin, and these are the first few that I’ve worked on.

We were staying close to the Sandymount/Lansdowne/Ballsbridge areas of Dublin, and spent a bit of time wandering round the Sandymount streets.

At the strand at Sandymount with views over to Poolbeg Power Station.

The Aviva Stadium, rising above a picturesque part of the Dublin suburbs.  The stadium is home to both the Irish soccer and rugby international teams, and is a great photographic subject.  This shot is a stitched panorama as I couldn’t fit the whole thing into one photo.

A quick visit to Dun Laoghaire, a little further south along the coast. 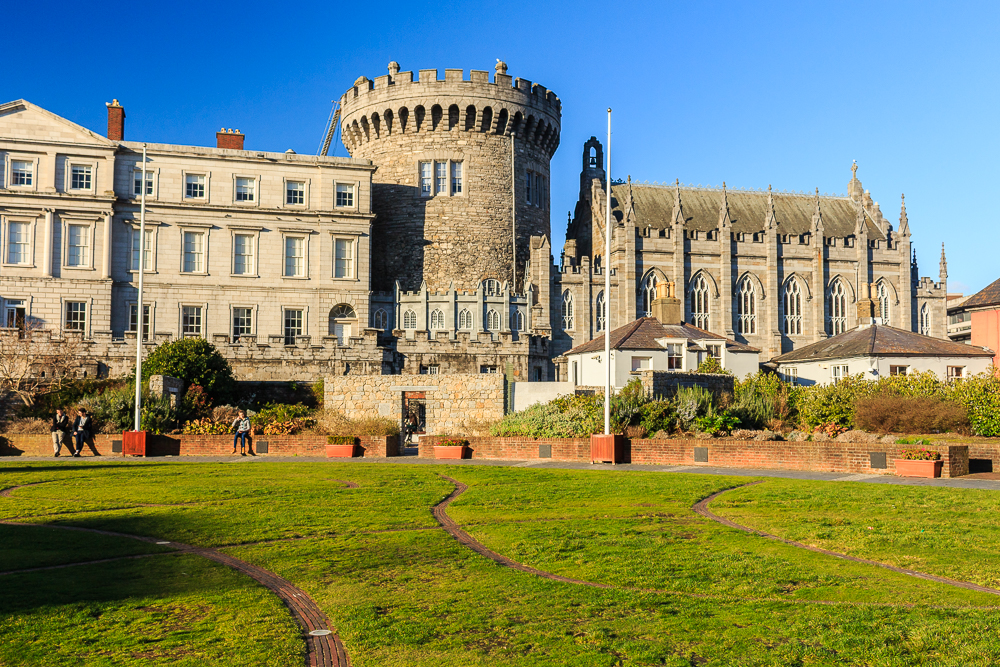 Dublin Castle in amazingly mild weather for February!  It was warm enough to sit outside cafes sipping coffee, watching the world go by.  Even at seven or eight in evening, we were able to sit outside a pub, me in a short-sleeved shirt, drinking guinness, and be quite comfortable.  Not bad for an Irish winter’s day!

The Ha’penny Bridge across the River Liffey.

Croke Park, the home of the GAA, where big games including the All Ireland finals in Gaelic Football and Hurling are played.  It is one of the largest stadiums in Europe with a capacity of over 82 000.  Hugely impressive for an amateur sporting organisation.  Having photographed the Aviva, I couldn’t leave Dublin without photographing Croke Park which would be even closer to my heart!

I have a big backlog of photos from this and previous trips to Dublin to post here now as its such a rich source of photographic opportunities, but I hope to get some them up here soon.

11 thoughts on “A Few Days In Dublin”