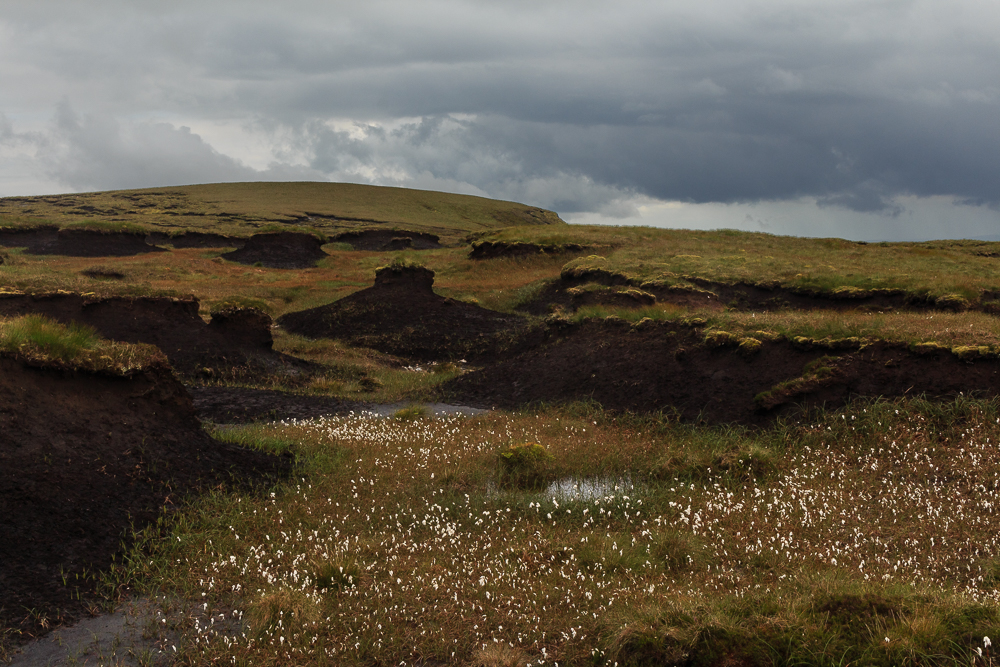 Amidst the bog cotton up on the plateau.

The skies were gloomy as I made my way around the many sink holes, formed where the limestone rock had been dissolved.  From up on top, I could see however, that there were glimpes of blue sky in some directions, stormy black clouds in others, and it was likely that I would be in for changeable weather. 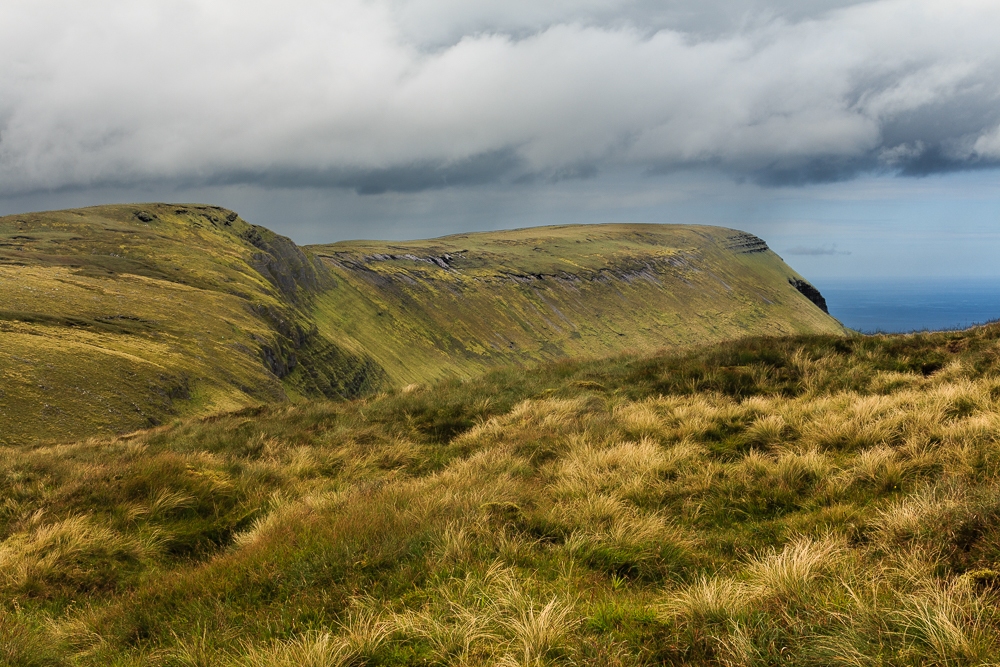 Benbulben stretching out ahead, with the summit near the end on the right, and Benbulbin South East Top being the high point on the left. 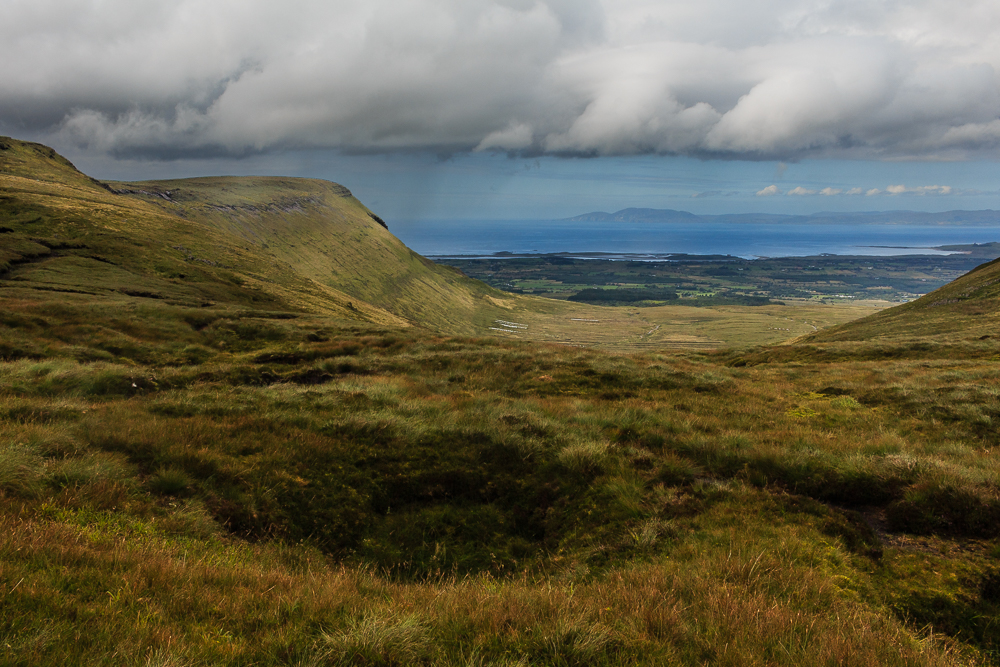 Passing through the sinkholes. 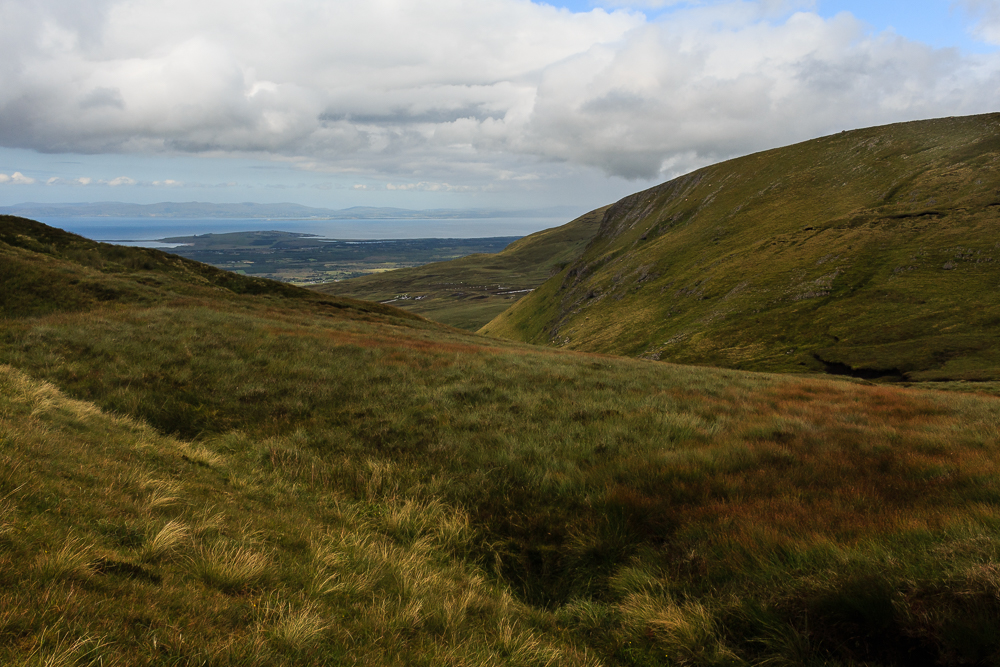 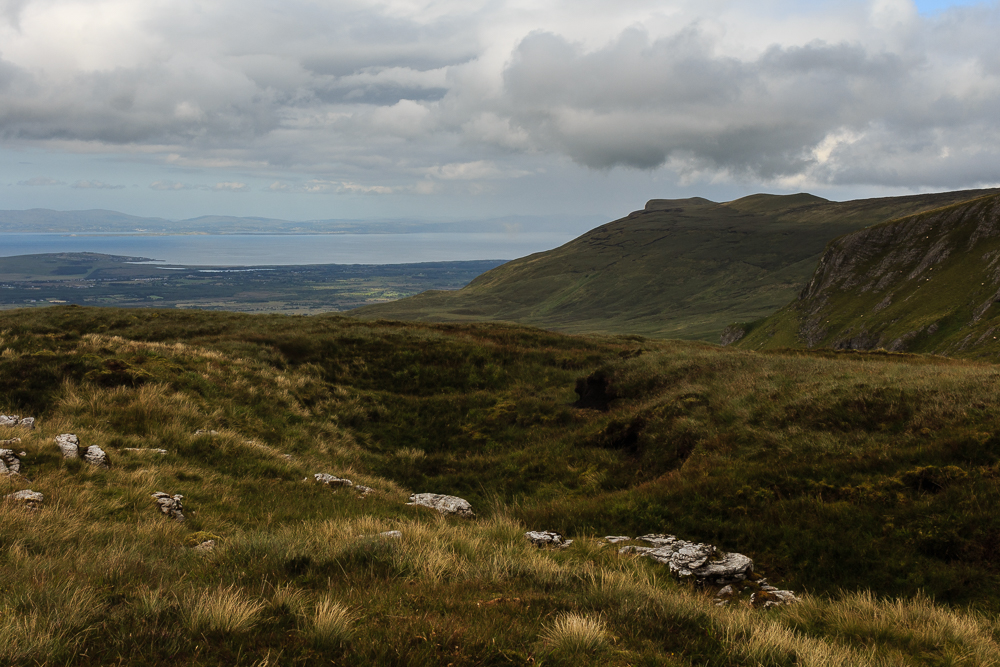 One of the larger sunken areas. 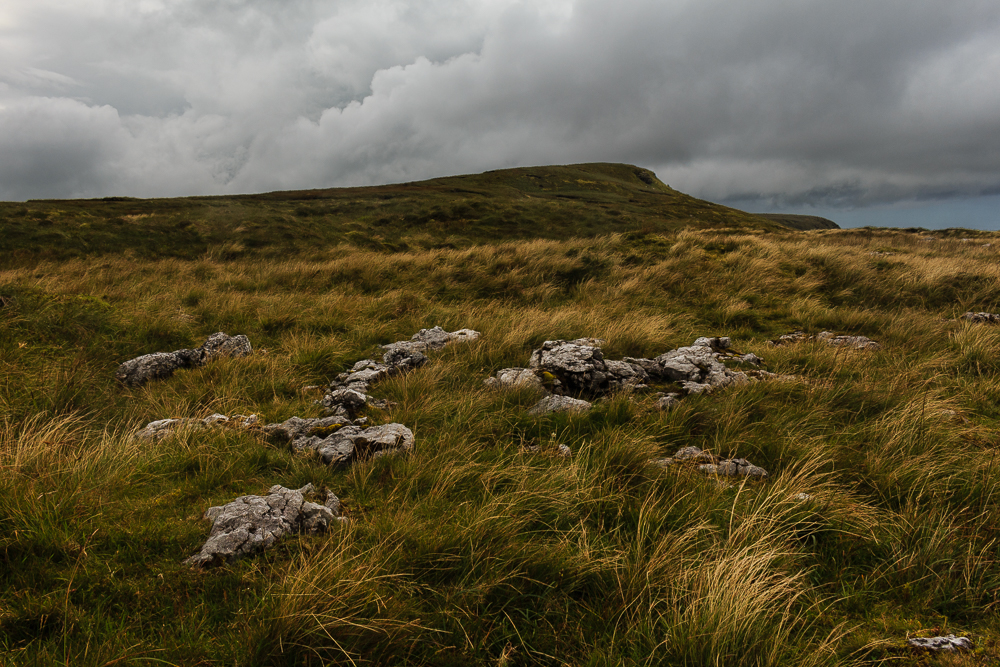 Limestone on the surface. 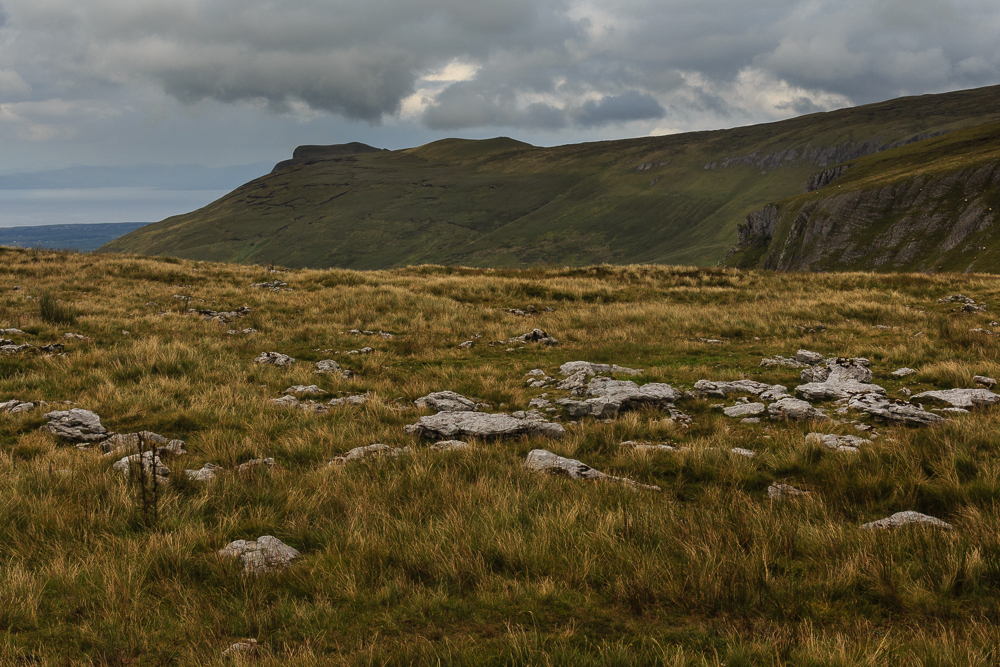 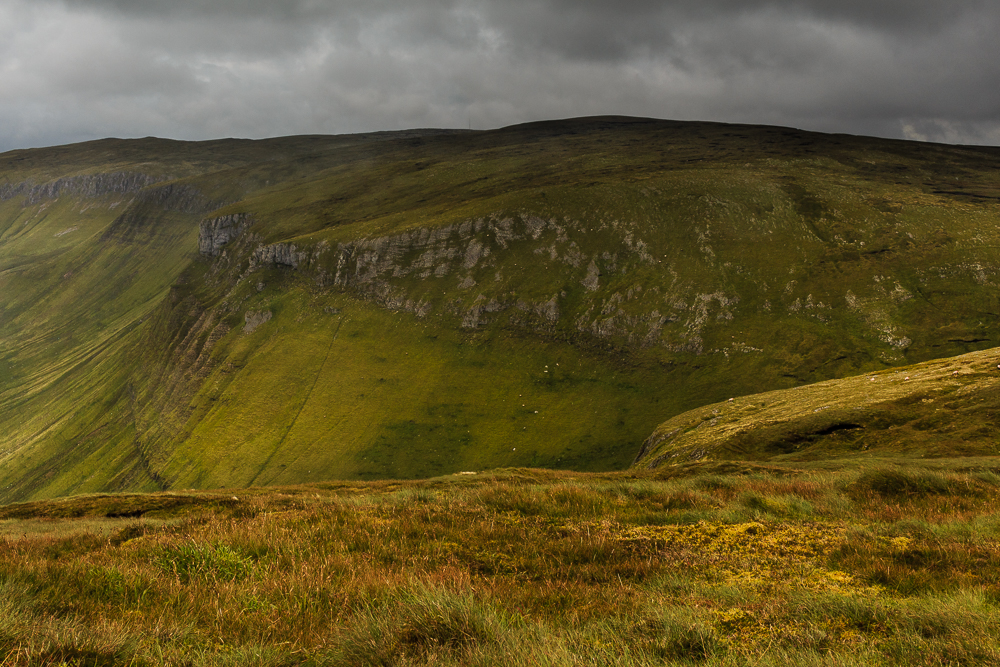 Near the top of Benbulbin South East Top, and looking backwards. 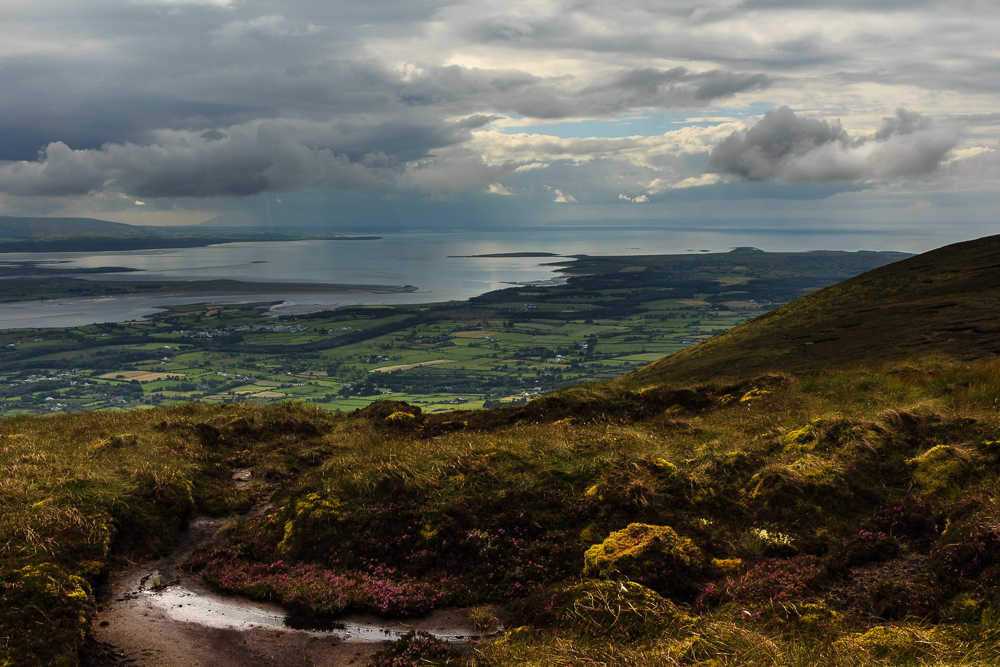 I loved the views over the Sligo coastline in the changing light. 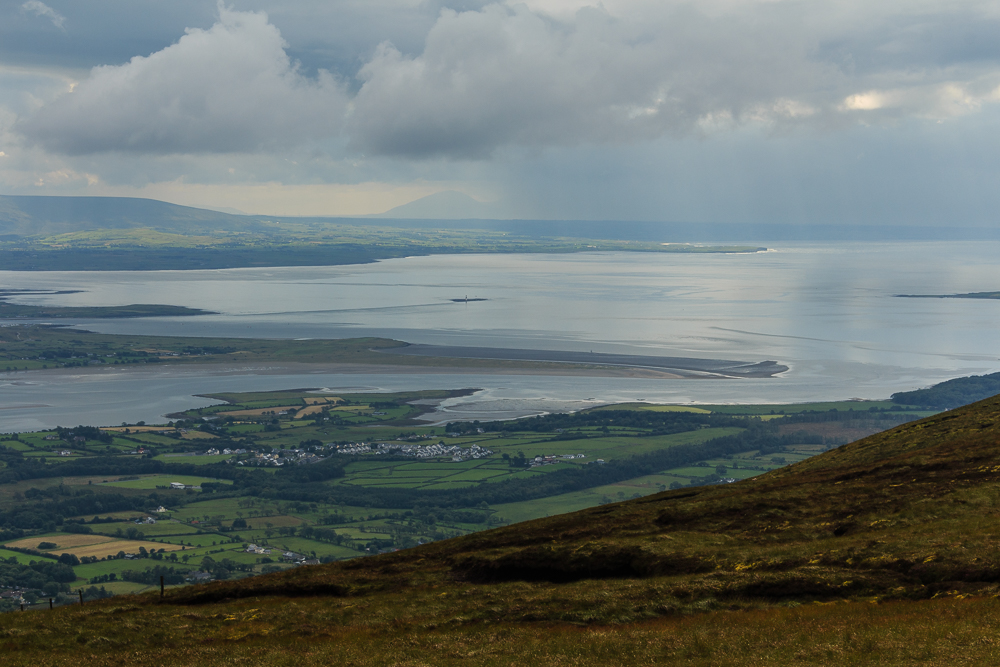 As I moved off Benbulbin South East Top and continued towards the main summit, the clouds were thickening overhead, and the few shots I took were ruined by rain spots on the lens, but as I reached the trig pillar on Benbulben, it dried up again. 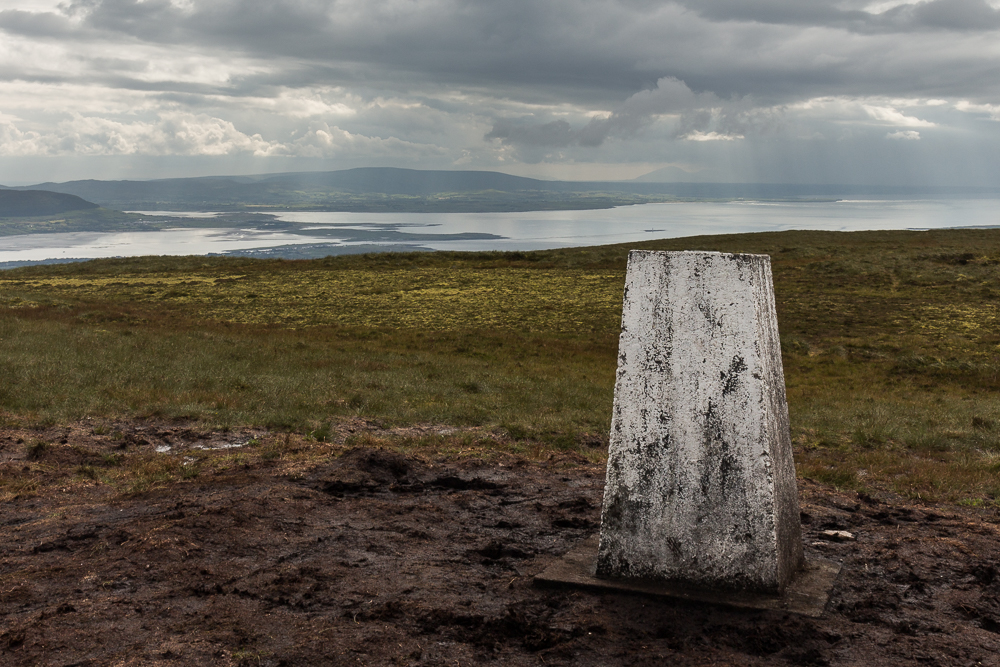 The trig pillar in the middle of a very muddy patch at the summit.

Although I was at the summit, it was in the middle of the broad top, so the views were less dramatic than many other parts of the mountain.  I didn’t linger, but continued north west past the trig pillar to get the views from the northern cliffs.

Sheep on the summit.  Although it had stopped raining on me, there were very dark clouds to be seen in the surrounding skies. 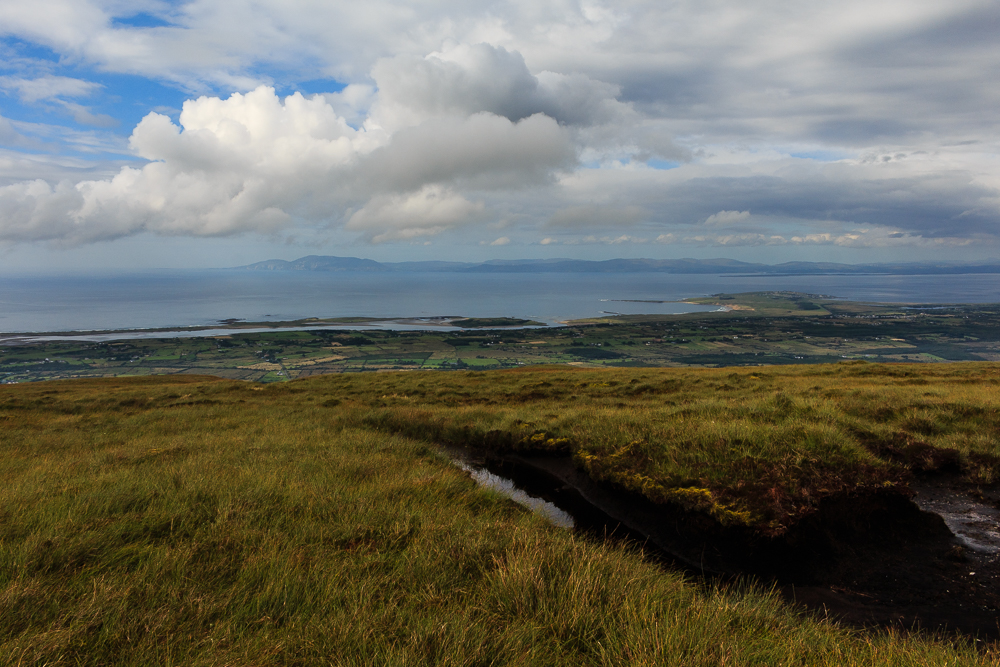 Fantastic clouds over Donegal Bay.  I was standing on one of Ireland’s most iconic mountains, and across the bay, under that cloud, was another – Slieve League.

From the the trig pillar and summit, it was a short walk to the northern cliffs, and they were probably the highlight of the walk.  They offered great views as they dropped vertically to the countryside far below. 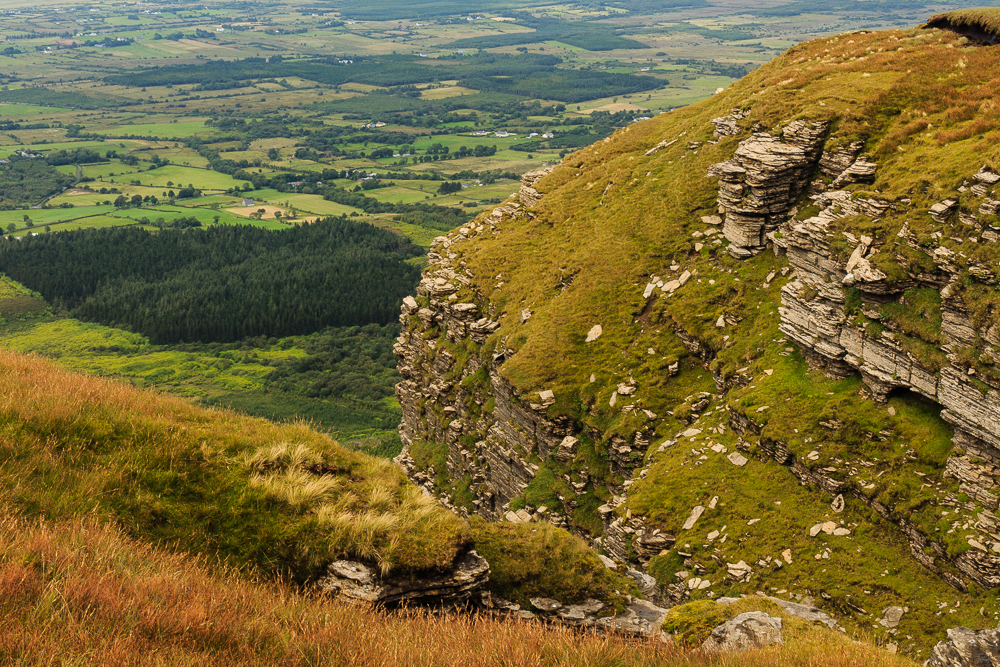 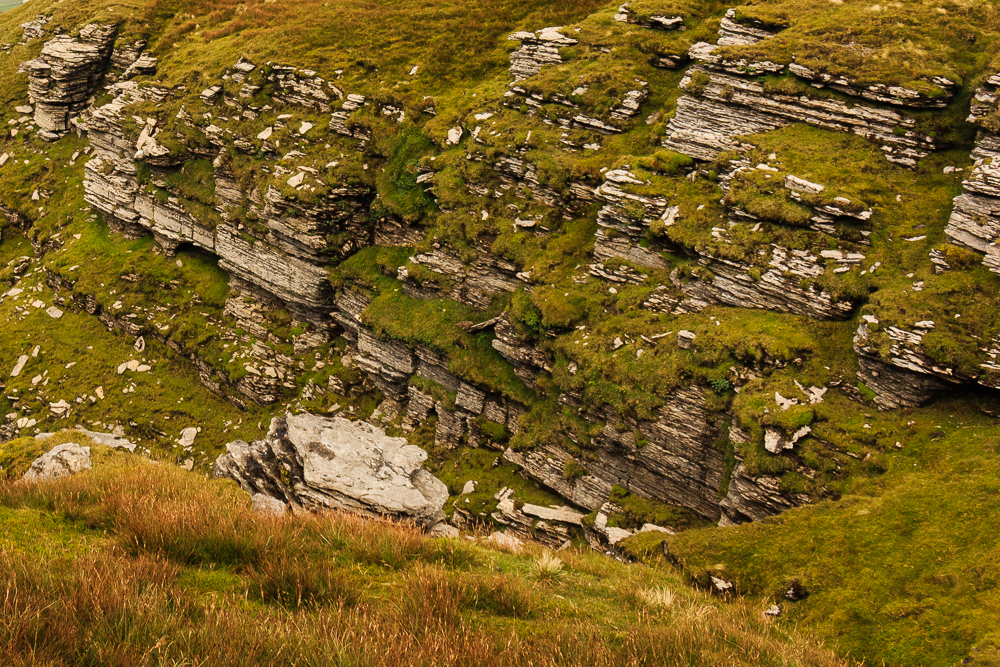 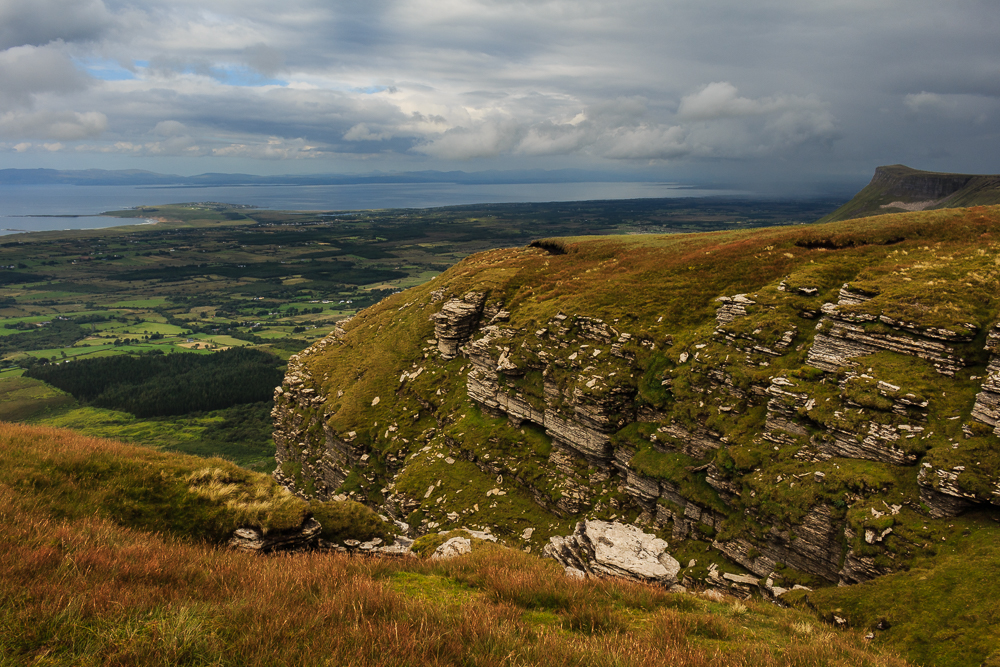 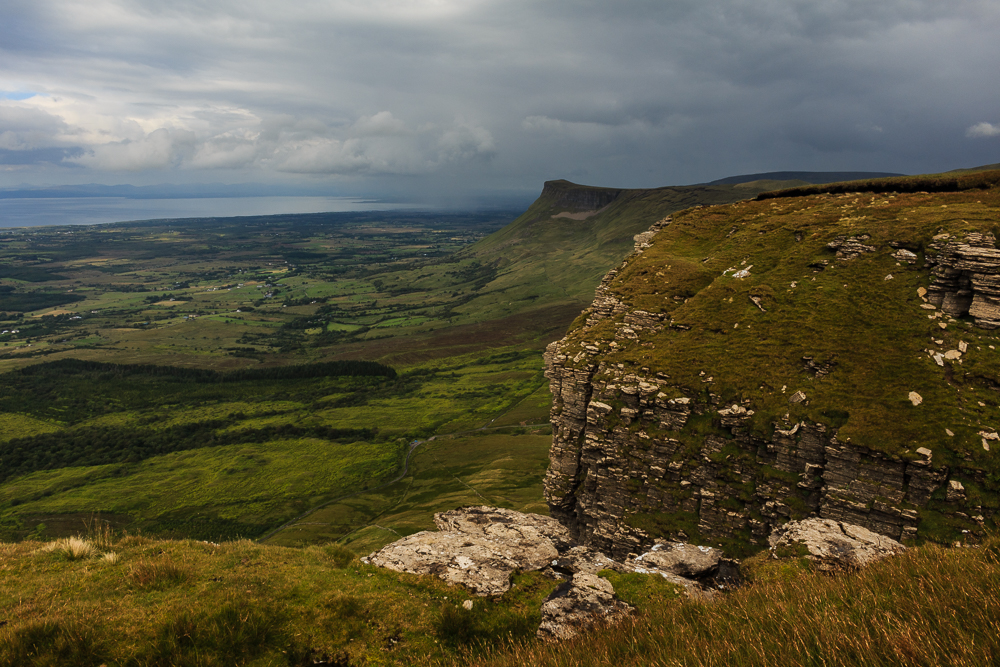 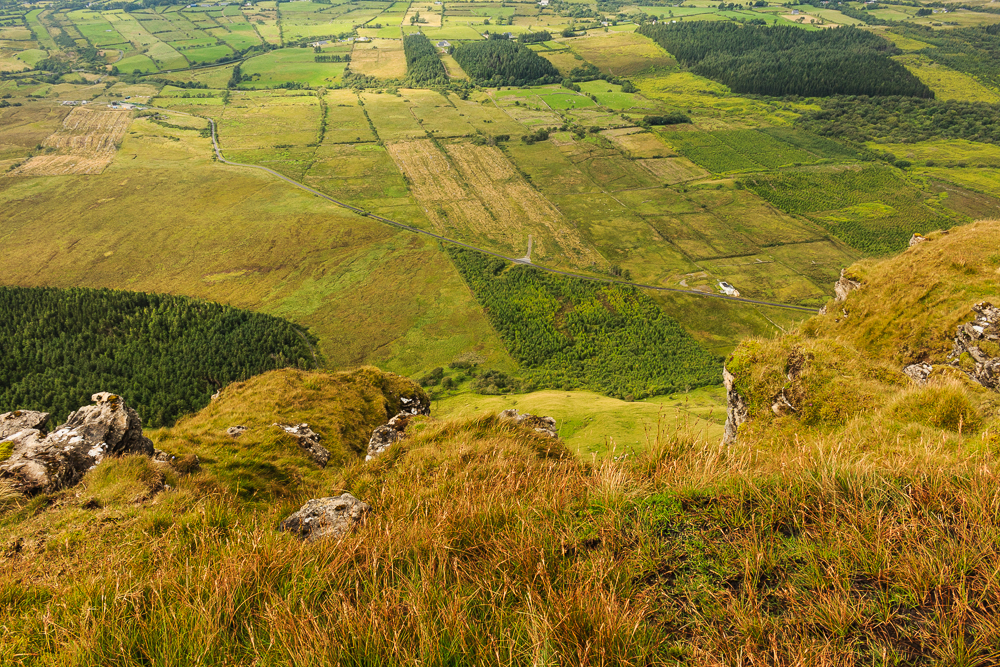 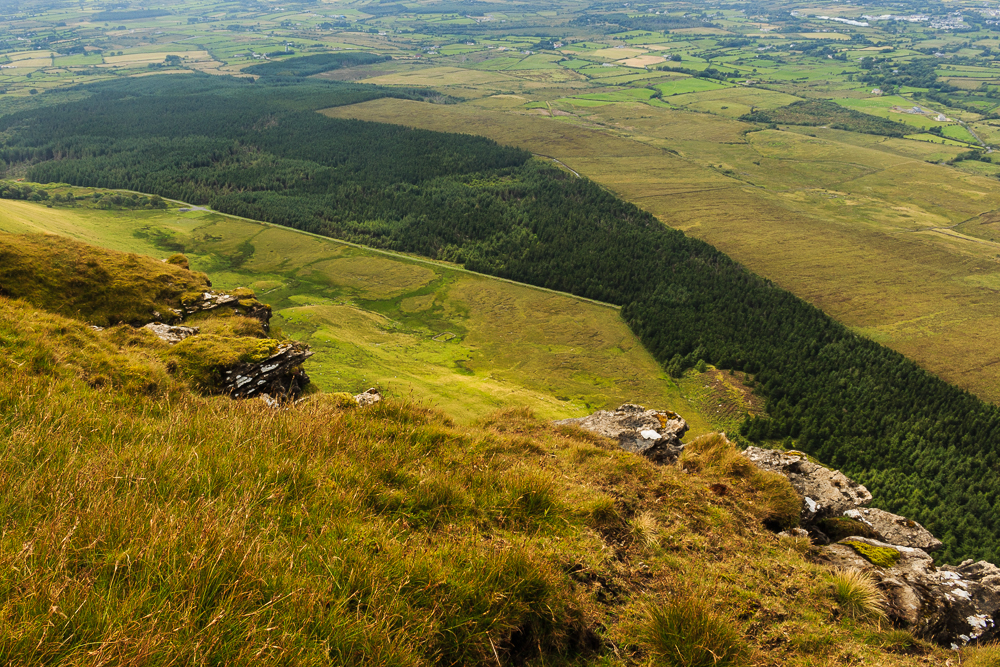 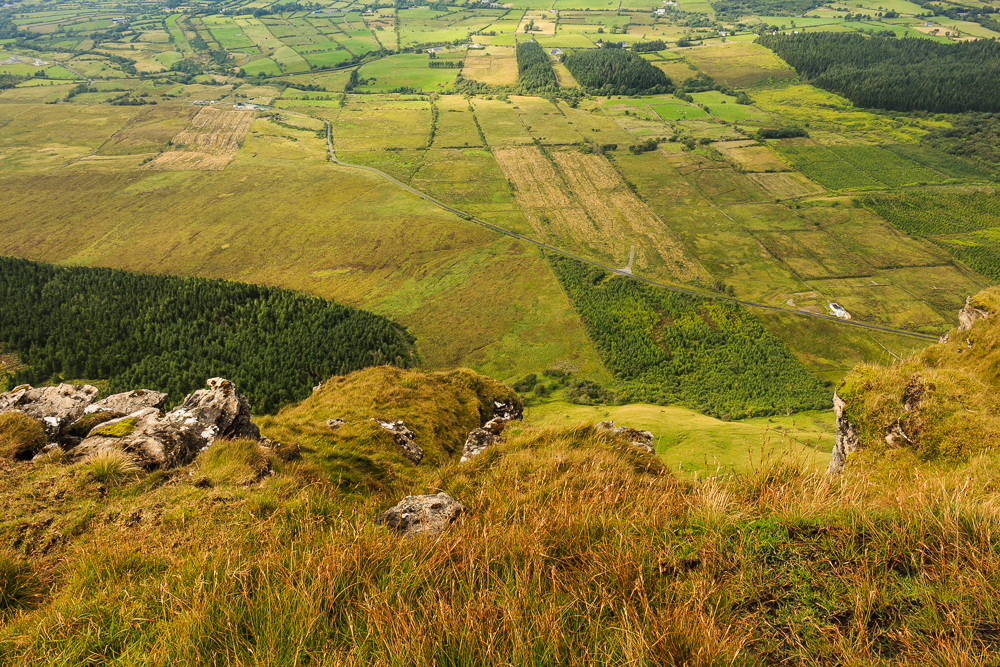 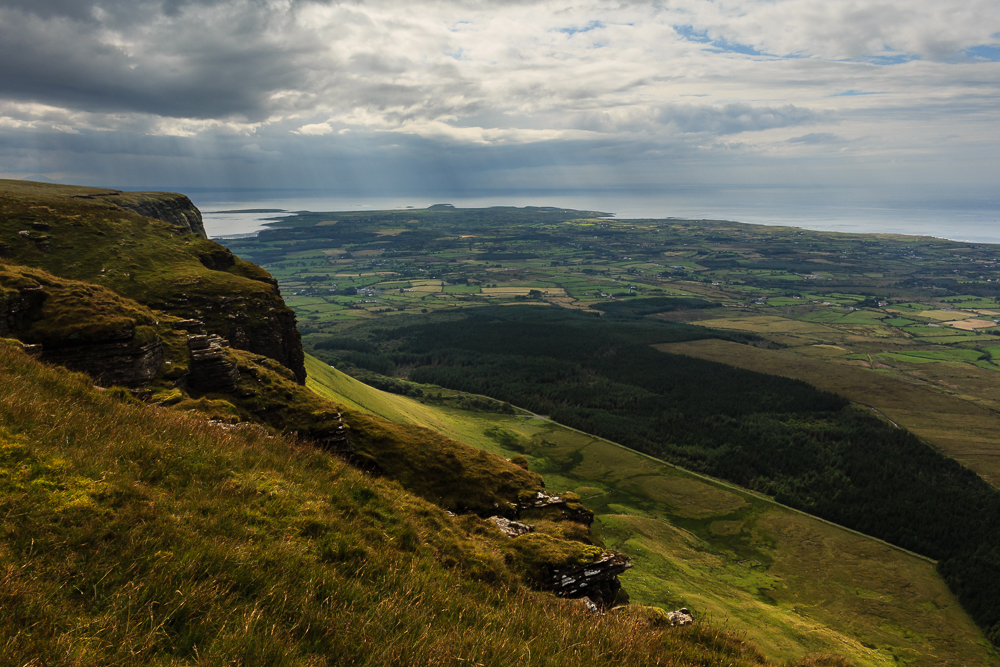 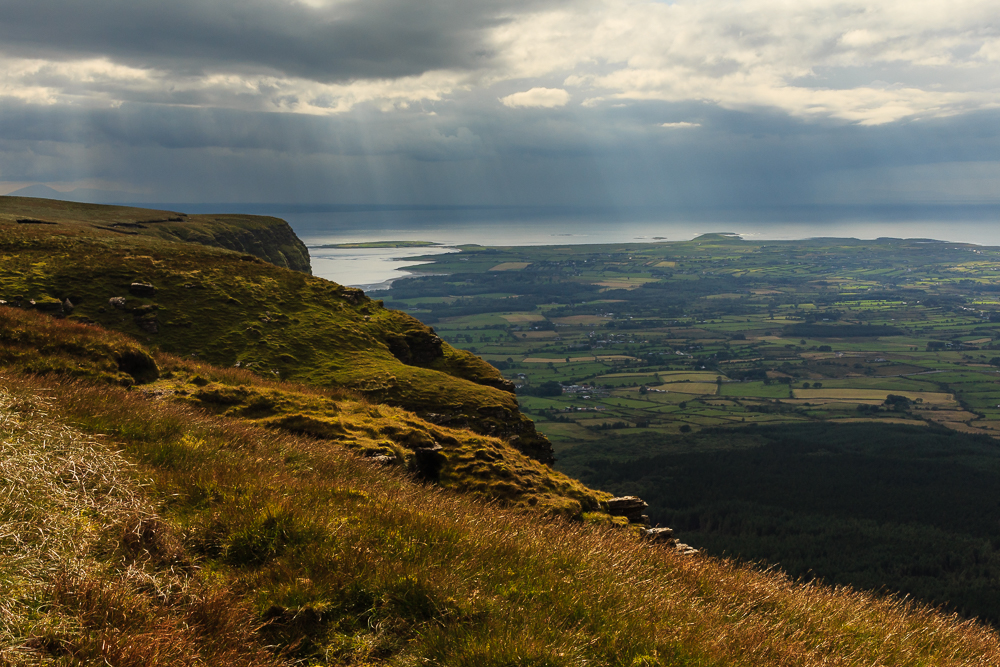 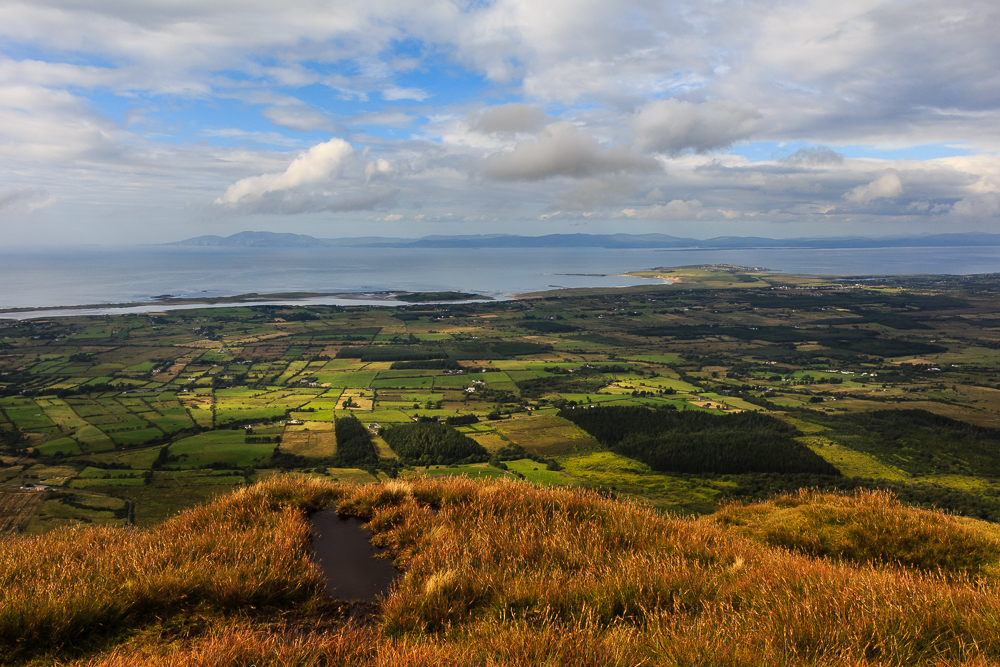 Sunlight beginning to light up the countryside below.

As I stood peering over the cliffs, the sun broke through and illuminated the face of the cliffs to my side.  With Benwiskin and the rest of the landscape behind still in shade under threatening clouds, it gave me my favourite photos of the day. 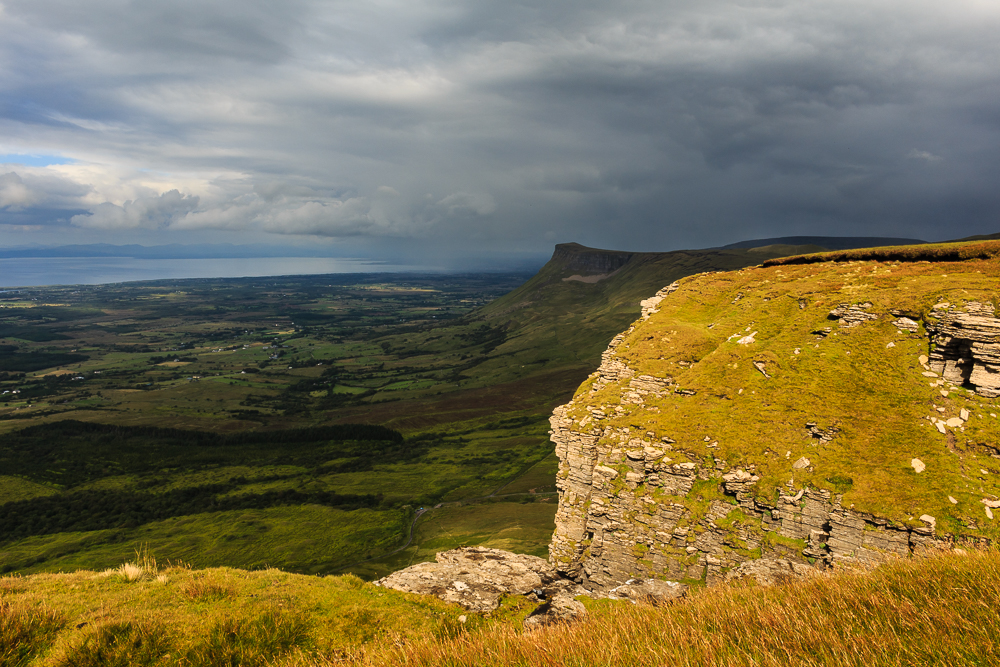 Benbulben’s cliffs lit up by a break in the clouds, with Benwiskin behind, and dark skies above. 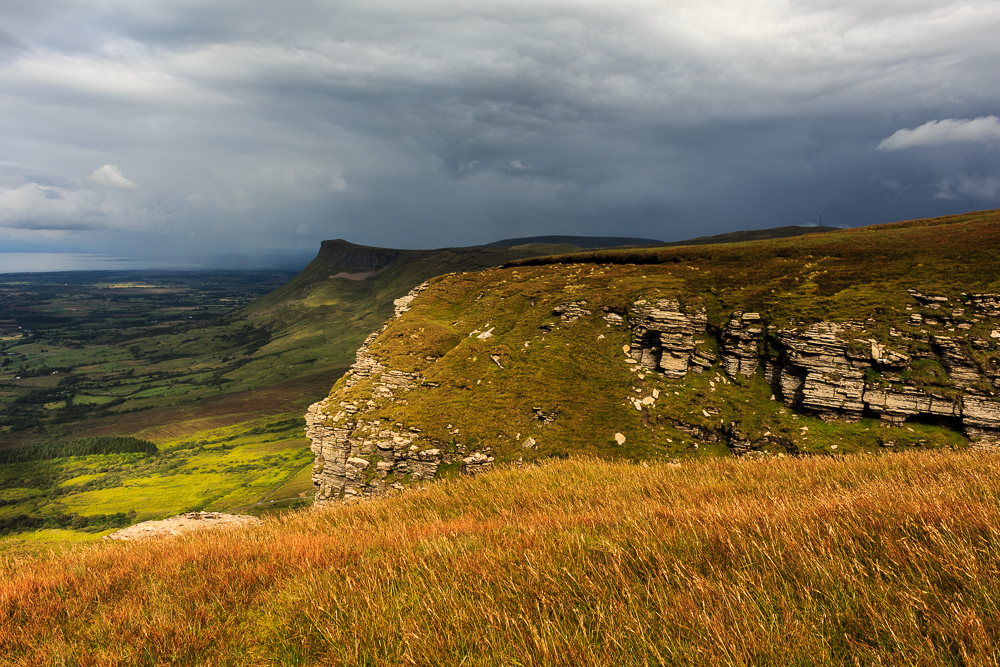 Eventually, I had to leave the drama of the cliff tops and start making my way back.  The changeable weather continued to throw up photo opportunities and I’ll continue in Part 3.

9 thoughts on “Benbulben Part 2: Along The Top”