Its the time of year to indulge myself again, and to look back and pick my best photos from the past year.  Its hard to be objective, and separate the emotion and enjoyment of the experience on the trip when a photo was taken, from its quality.  Some probably make it in because of the memories attached rather than being a good photo.  If nothing else, its great craic for me at least, looking back over the year and remembering the places I’ve been!

First up is this photo from back in January, taken on the way up Mackoght in the Derryveagh Mountains, Co. Donegal.  Straight off, this is one where my memories and the experience of the walk may have coloured my view on the photograph.  The end of 2015 and start of  2016 seemed to have seen relentless rain, and it was almost impossible to get any photographs from hill walking.  Even reaching the hills was often impossible as many roads and bridges were often closed due to severe flooding in our part of the world.  This was the first good walk I’d had in a while, and even though conditions were still pretty bad,  I was glad just to be out.  I liked the mood of the shot, with the brooding skies and the cloud hanging over nearby Errigal. 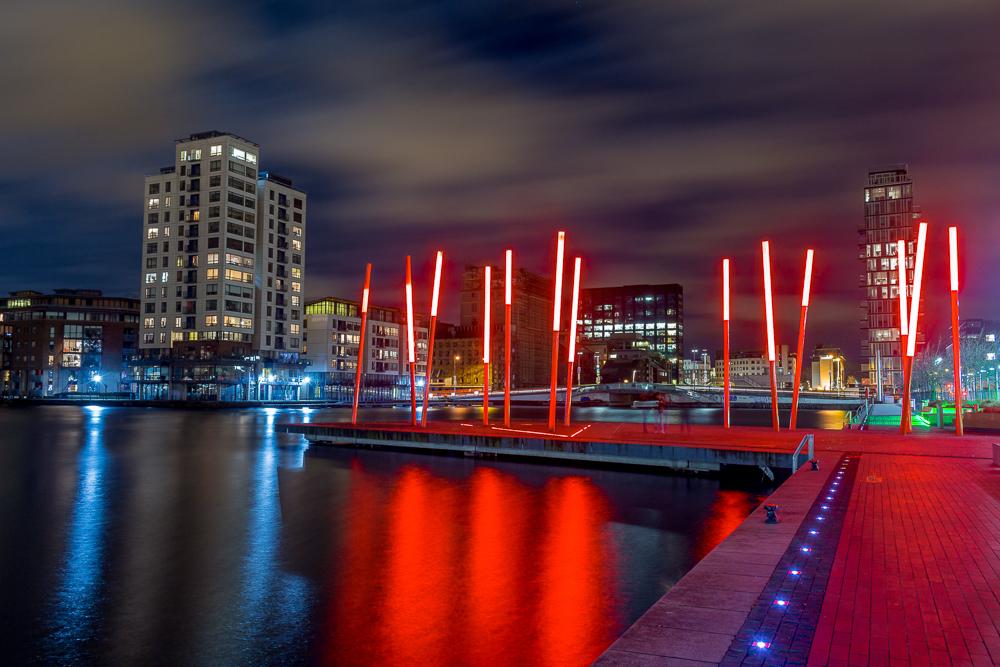 A very different view for my second choice.  This is Grand Canal Dock in Dublin from when I was down in February for the annual Mountainviews.ie get together.  Its a perfect location for night shots with the light installations reflected in the water. 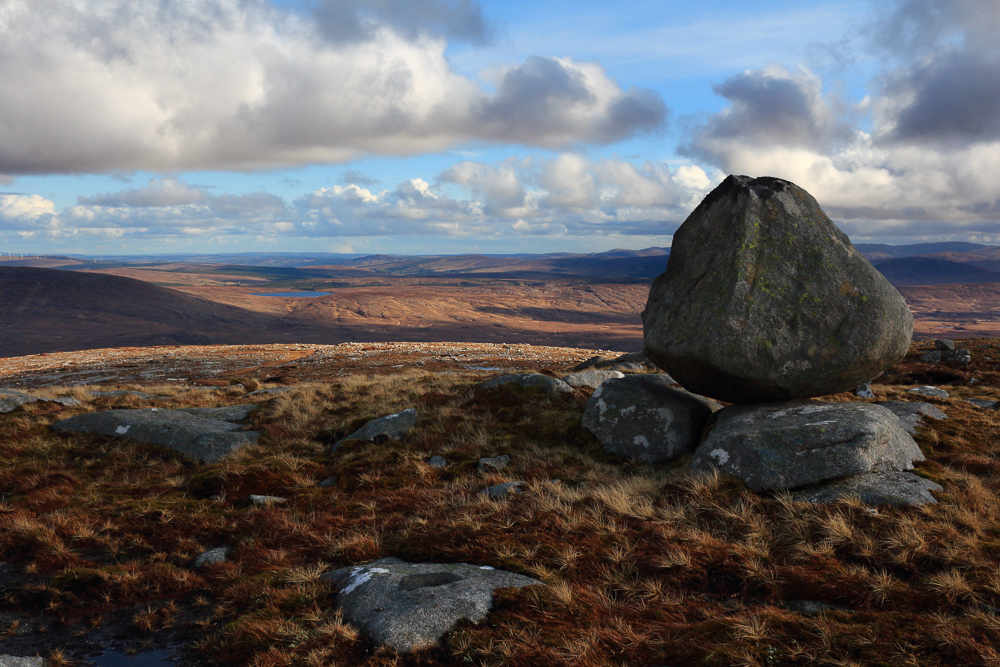 This was taken not far from the first photo, also in the Derryveagh Mountains, this time in better weather in March, on Crockfadda.  This was the last summit on a fantastic day which had included four other peaks – a hard walk over some difficult terrain and steep slopes, which for me, added value to a hard-earned photo.  At this location, I loved the feeling of remoteness in the bleak but beautiful landscape stretching out into the distance, and the large, erratic boulder which must have remained balanced in this precarious position for thousands of years since the ice-age, seemed perfect for foreground interest.

On the same walk as the last photo, it was late as I made my way down from Crockfadda, and the dying light created nice colour in the sky, and over Lough Barra below.  It seemed like I could be the only person for miles, and having such a view was a great reward for heading up into the mountains.

Bias may play a part here, but I must include a photo from my native Co. Tyrone!  This was taken while walking the line of hills on the south side of the stunning Glenelly Valley, in the Sperrin Mountains.  It was one of those Spring days in March that put a spring in your step too. 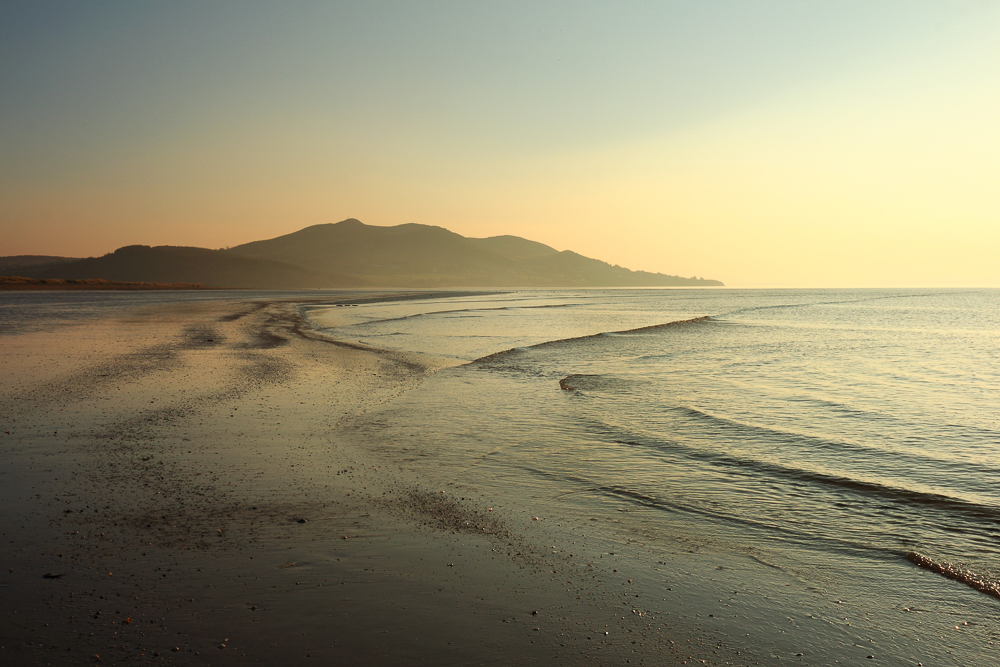 Also taken in March, back in Donegal again for this photo.  I was out with the family and we’d had a brilliant day at Dunree Fort and the surrounding area in Inishowen.  On the way home, the sunset was starting to look magnificent, and luckily, we happened to be passing Lisfannon Beach at the time.  I couldn’t resist stopping to try to capture the golden light.  In contrast to some of the other shots which involved miles of hiking, this couldn’t have been easier – only a couple of hundred metres from the the car!

One of my favourite places where I spent many happy childhood summer holidays, is the Rosbeg area in Co. Donegal.  I was touring the area on nice May day, when the wind really picked up as I was passing Rosbeg Harbour.  A real storm was developing as I climbed up on to the rocky headland, and I tried to stay steady in the wind to try to capture the threatening sky, green/grey sea and waves crashing into the shore.

Later that same day, I was searching further north for the sea arch at Crohy Head, Maghery, Co. Donegal, and found it in the same stormy conditions.  i could hardly hold the camera steady in the wind to get a sharp shot, but its often the most difficult conditions and extremes of weather that make interesting photos.

One of my favourite walks this year was around Horn Head (Donegal again!).  I had headed out with the main intention of photographing the impressive Marble Arch sea arch, and I did get some photos I was really happy with of it.  There were amazing views all the way round that part of the coast however, and one of my favourite views was this scene, looking across Tramore Strand, with Muckish and its neighbours in the Derryveagh Mountains providing a magnificent backdrop.

In June I spent several happy hours walking in the Mournes in Co. Down, taking in several summits.  Here, I was following the famous Mourne Wall down from Slieve Meelbeg, and I thought my next target, Slieve Meelmore looked impressive with patches of light and shadow playing across its slopes. 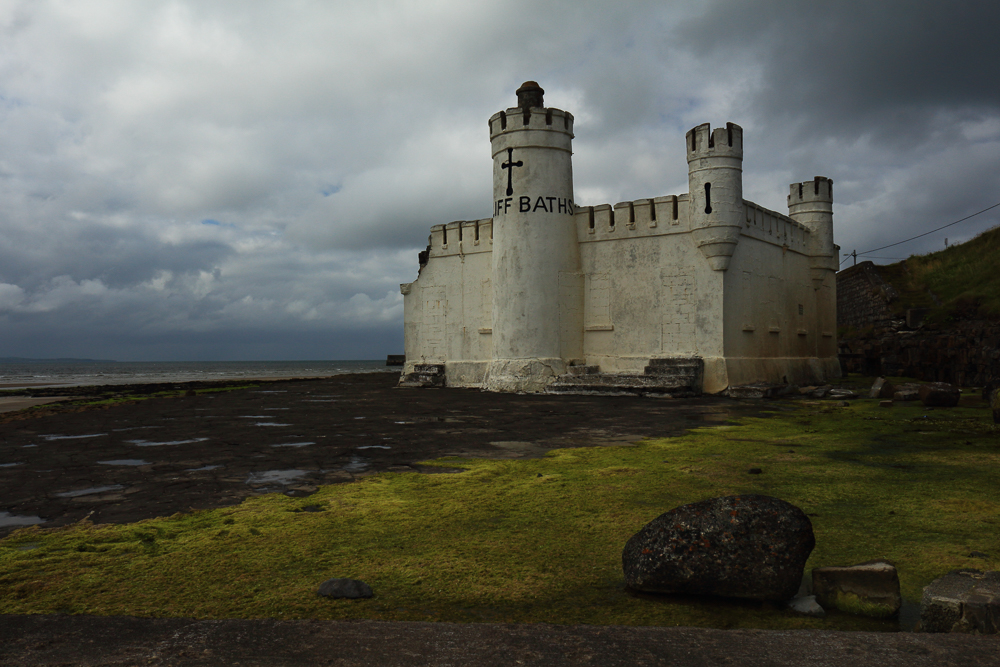 Co. Sligo for my next choice, taken in July in very un-summery weather on Enniscrone beach.  The unusual, and sadly dilapidated Cliff Baths seemed a subject that fitted the mood of the weather. 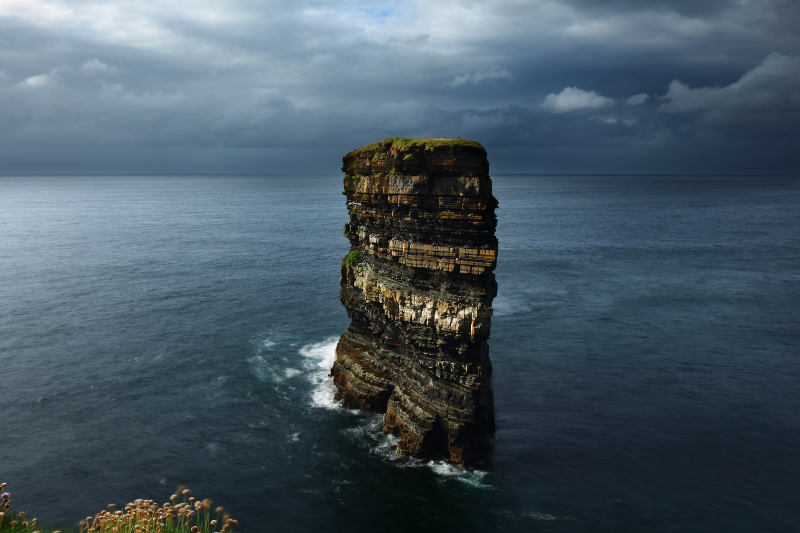 On the same short break, I was really looking forward to visiting one of Ireland’s most iconic locations for photographers, the spectacular Dun Briste sea stack at Downpatrick Head in Co. Mayo.  It looked like the grey, rainy weather and flat light might ruin any chance of a decent photograph, but just as I was about to give up hope, a small break appeared in the clouds, and a shaft of sunlight began to move across the surface of the sea like a spotlight.  I was incredibly lucky that it happened to pass right across the stack, briefly lighting it up and picking out the details in its vertical walls, and I was able to get a photo I was happy with.

Our summer holidays this year were spent in amazing West Cork, and I took a lot of photos, most of which I haven’t even processed yet.  Landscape photographers usually hate blue sky days, and the middle of the day, but I thought it suited the scene perfectly here.  I loved the rugged coastal scenery and the fifty feet high Baltimore Beacon, and the cows were an added bonus in the shot.

I could probably have happily filled the post with images from our West Cork trip, but I’ll restrict myself to one more – this one from the Healy Pass looking across Glanmore Lake to Tooreenbaha and Lackabane mountains.  The Healy Pass crosses the Caha Mountains on the border between Cork and Kerry, and this image would be on the Kerry side of the pass.  There had been a blanket of cloud for several hours, and heavy rain, but this glimpse of light on the lough and mountain couldn’t have had better timing as we made our way up towards the top of the pass.

Back to Donegal for this photo, taken in October on Croaghgorm in the Bluestack Mountains, looking towards Lavagh More.  This was one my favourite walks of the year, starting in the Reelan Valley, crossing the flanks of Lavagh More and taking in Croaghgorm, the highest peak in the Bluestacks, and one of its subsidiary summits – Croaghgorm East Top.  I was just starting the route back out again here, after finding and exploring the wreckage of a World War II plane crash.  The days were getting shorter and the sun was low in the sky as I took this shot looking over the ground I would now cross to get back to the car.

One from Co. Kerry, in the MacGillycuddy’s Reeks mountains.  Here I was standing on Ireland’s second highest mountain Beenkeragh, with the highest, Carrauntoohil shrouded in cloud on the left.  I was about to start across the notorious Beenkeragh Ridge which links these two summits, with the ridge itself looking even more intimidating as it was partially hidden by the clouds.  Another brilliant day’s walking.

This year, I visited Tollymore Forest Park in Co. Down for the first time, and I was sorry I hadn’t gone there a lot sooner.  Its a stunning place and its easy to see why it was chosen as one of the filming locations for Game Of Thrones.  I was particularly glad I visited when the Autumn colour was at its peak, and this photo of Foleys Bridge across the Shimna River was probably my favourite of the day.

October again, and the early sunsets make it convenient to head out in the evening for capturing colourful skies.  This was taken at Rossigh Jetty on Lower Lough Erne in Co. Fermanagh.  The sun had gone down but was still making its presence felt with some colour in the clouds, with the low light leading to a long exposure that smoothed out the surface of the lough.  A great spot to  experience the sunset.

Its nice this year to have photos from Inishowen at the northern tip of Ireland, to Baltimore in West Cork at the very bottom, and from Dublin on the east coast, to Mayo on the west coast.  Our neighbouring county Donegal is a definite contender for the most beautiful county in my eyes however, and was the location for one the last photos to make the list.  This was taken in December when I had an errand in Donegal Town.  It was a dull day, but as usual, I took the camera just in case, and I was glad I did, as the skies began to clear a little as darkness approached.  I put off my errand until later, and continued past Donegal Town to Mountcharles, and the little beach beside the pier.  I got half an hour or so of light, and some great colour before continuing for the original purpose of the trip! 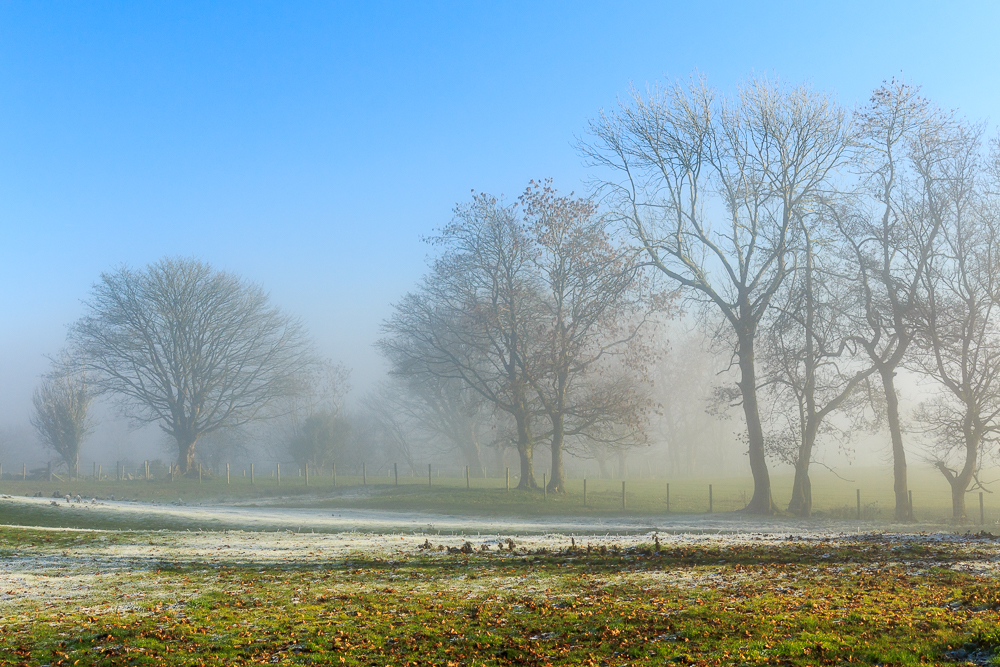 Last one, and bias play its part again, as we’re not only in Tyrone, but in my home town of Castlederg.  This was at the end of November when we got our first taste of Winter in what had been an unusually mild end to the year.  I’ve posted some images recently from this day, when the fog stayed thick all day lower in the valley.  This is on slightly higher ground outside the town, starting to emerge from the fog.  I could see the blue sky above, and the skeletal trees were revealed, with a dusting of frost on the fields.  A few metres higher and the frost was burned off, and I was in bright sunshine, a few lower and it was back in dense fog.  It made for a great variety in photographic conditions!

And that’s it for 2016.  Its been great to go through the year’s photos and bring back memories of all the places I’ve been, whether on family trips or long solo hikes.  Inevitably, as I mentioned, the memories invested in the photos will have influenced my choices, and I think I’ve included more photos each year!  Looking forward to hopefully getting out and about in 2017 and I hope everyone has a happy new year.