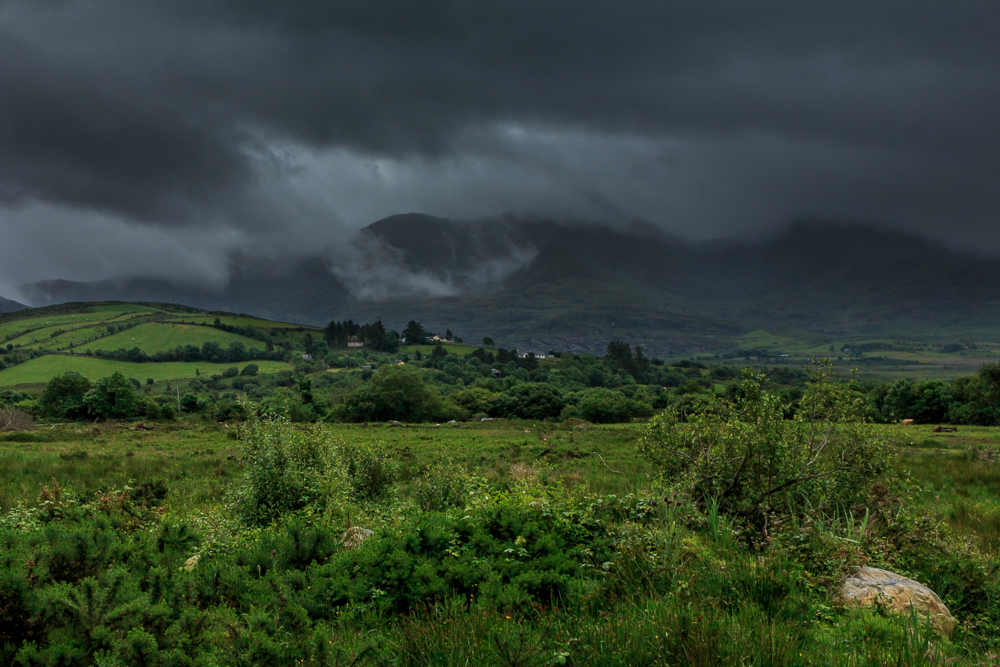 Gloomy weather in the Bridia Valley.

One of the most well known walks in Ireland is the Coomloughra Horseshoe in the MacGillycuddy’s Reeks mountain range in Co. Kerry.  The walk takes in 5 of only 14 peaks in Ireland over 900 meters – Caher West Top, Caher, Carrauntoohil, The Bones Peak and Beenkeragh, along with three other summits.  I’ve already been to the top of Carrauntoohil, Ireland’s highest summit, but its worth another visit, and I want to visit all the 900 plus summits, so I set off in June to tackle the horseshoe.  Part of the walk involves traversing the notorious Beenkeragh Ridge.  This high ridge stretches between Carrauntoohil and Ireland’s second highest mountain, Beenkeragh, taking in The Bones Peak on the way.  There are places with a lot of exposure and long drops on both sides, although there are ways to drop just below the ridge in places to avoid some of the more difficult parts.  Even so, other parts can’t be avoided, and I wanted to wait for good weather, with both good visibility and no high winds, to attempt it.  The difficulty is that weather forecasts are not always accurate, and even when they are, the weather in high places like this can be very different from that closer to sea level.  I live 6 to 7 hours drive away from these mountains so this inevitably means taking a bit of a gamble on the weather and hoping for the best.

With that in mind, I set off in June, with a reasonably good forecast, to take the long drive to Kerry.  The plan was to drive down, sleep in the car that night, and get an early start the next morning on a walk that would take in 8 summits in all.  It would be a long day as I would then have to make the return journey back to Co. Tyrone.  I got an early start for the drive down, and took a leisurely pace in the ominously bad weather, arriving at the car park near the base of the mountains in the late afternoon.  This was my planned sleeping spot, and I had hoped to have an easy stroll to pass the time in the long summer evening, but the weather was by now atrocious, with heavy rain and low black clouds.  It didn’t bode well for the next day’s walking, but trying to remain optimistic, I told myself that things can change in the blink of an eye, and went out for a drive, hoping to get some moody shots of the Kerry scenery.  First I set off through Glencar and along the Bridia Valley, a remote area with a narrow track which eventually comes to a dead end. 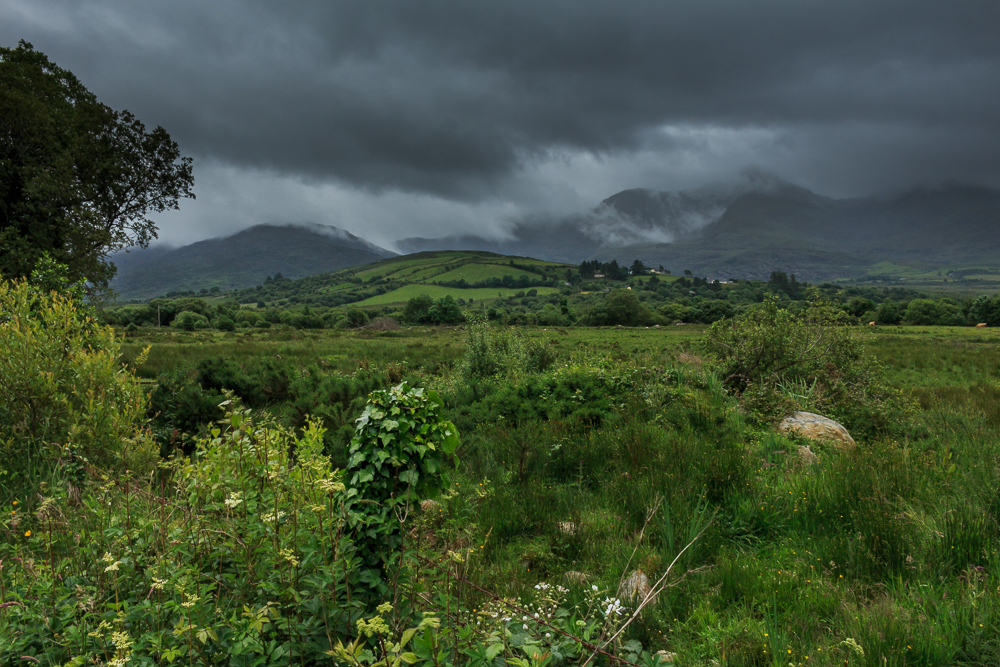 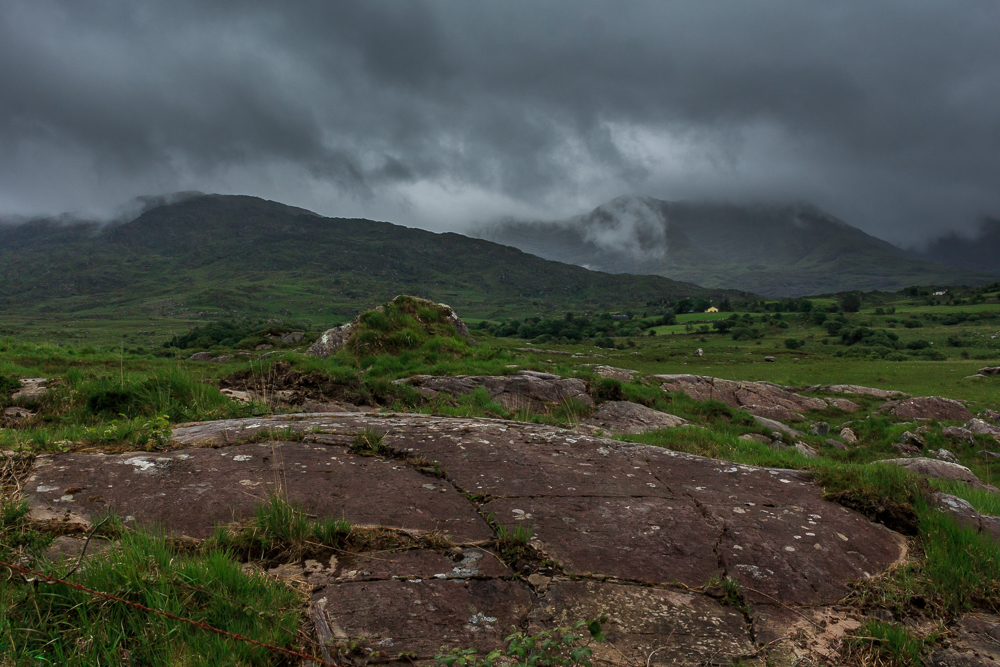 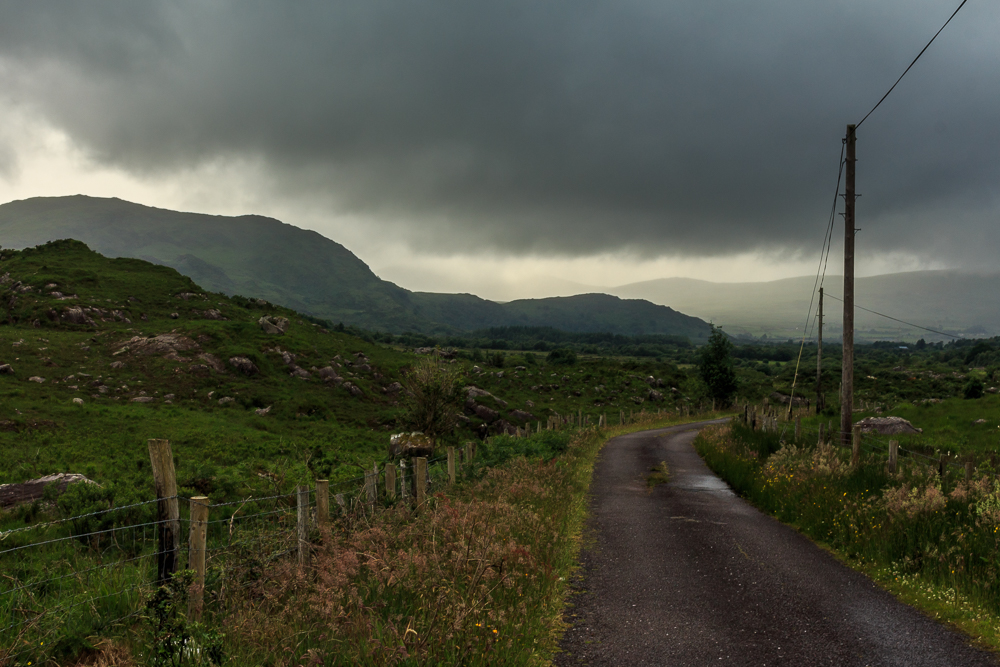 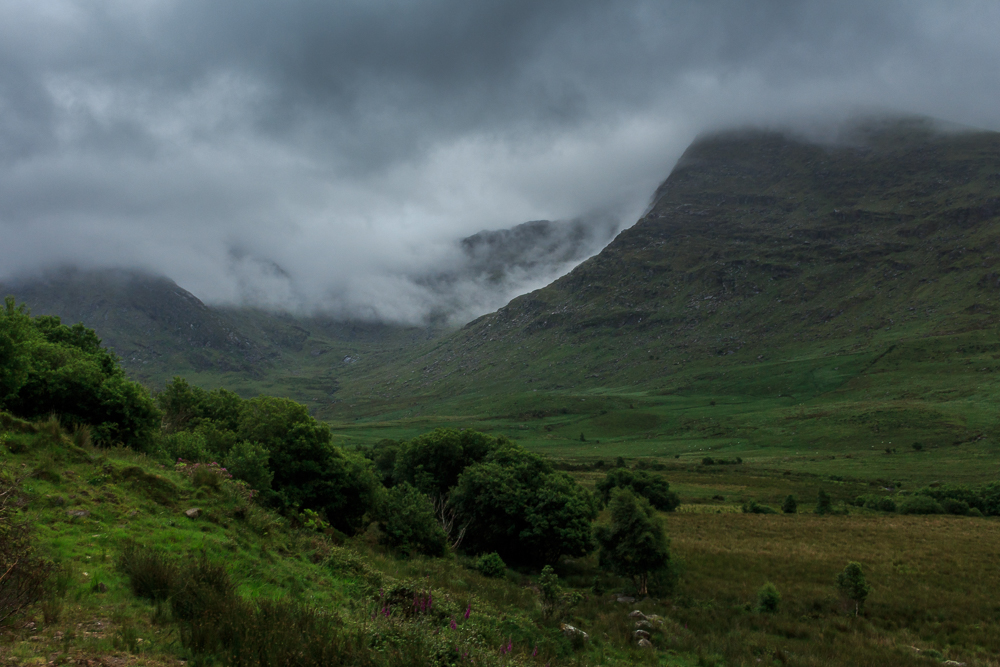 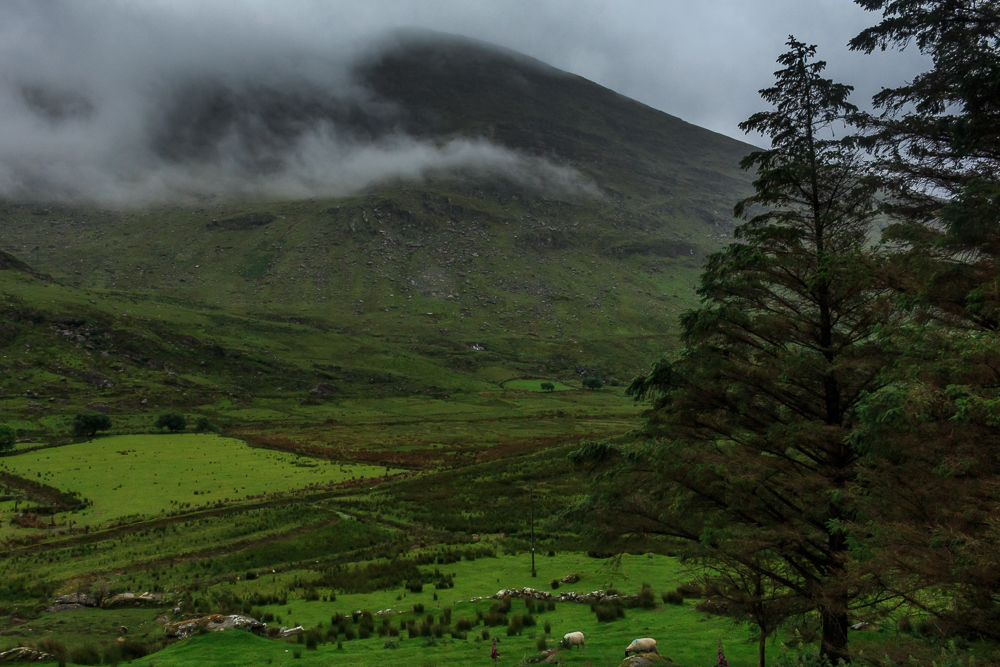 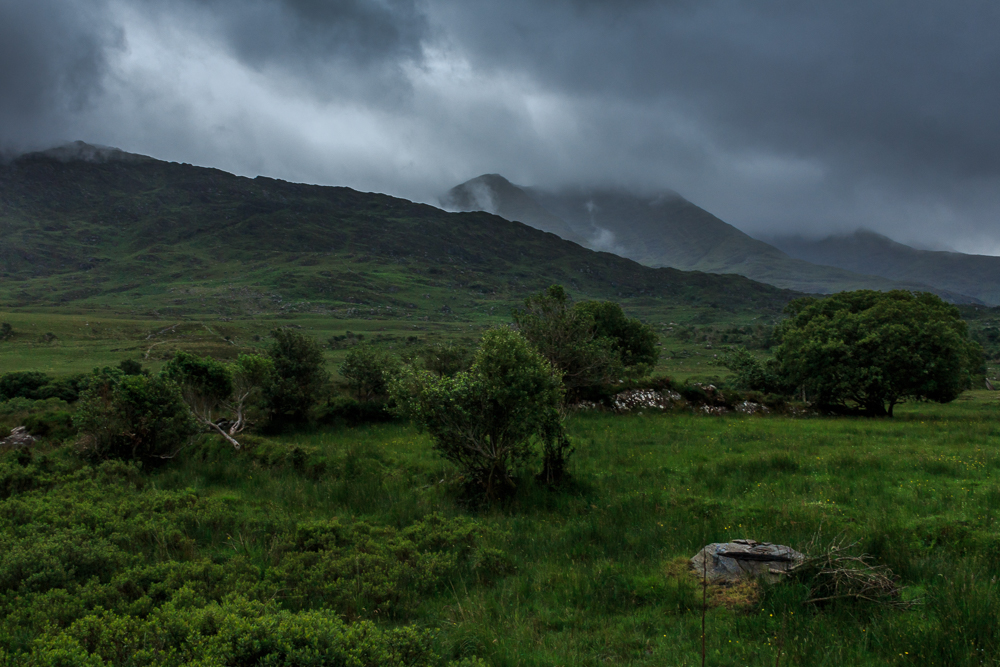 After retracing my route back along the Bridia Valley, I took a drive over the Ballagh Beama Gap.  Even with very low visibility, it was an impressive place, with towering walls on either side of the road.  It will be worth a visit again some day in better weather. 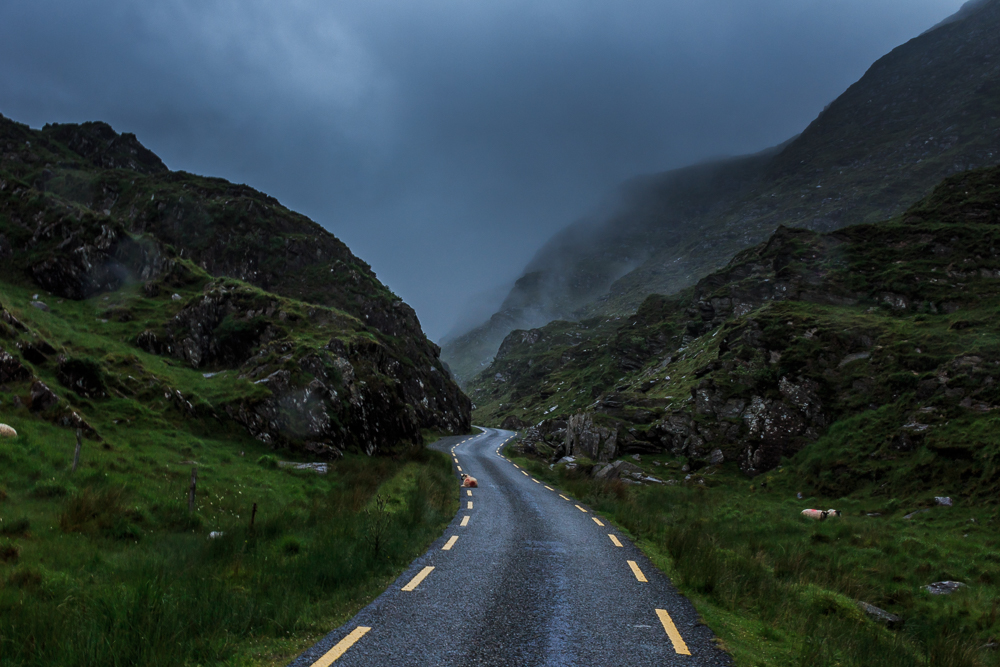 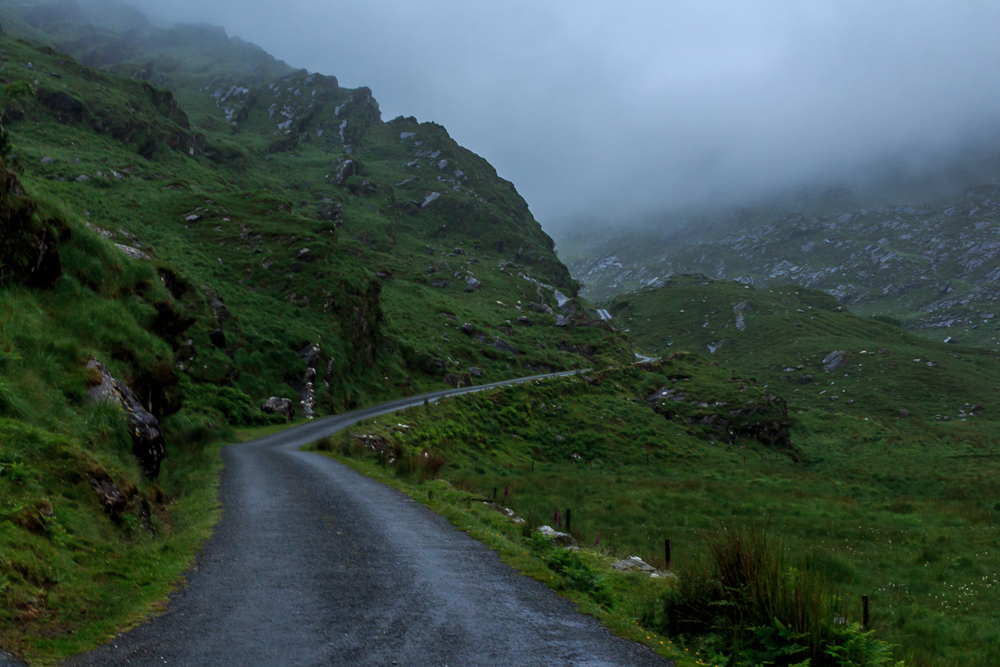 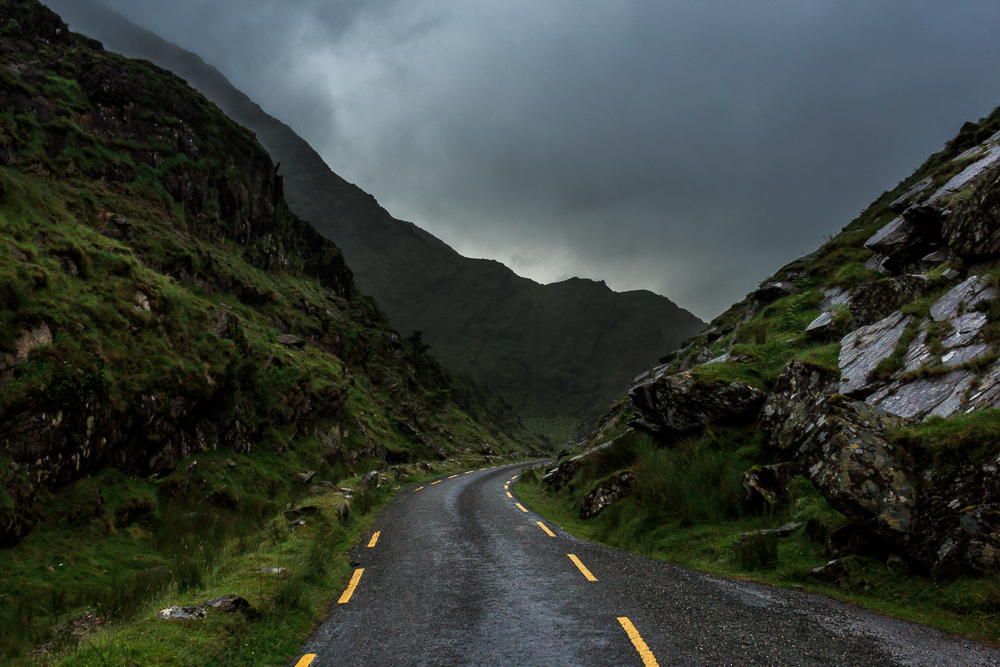 I headed back towards my sleeping spot for the night, and I as drove through Glencar, it almost appeared that the clouds might part. 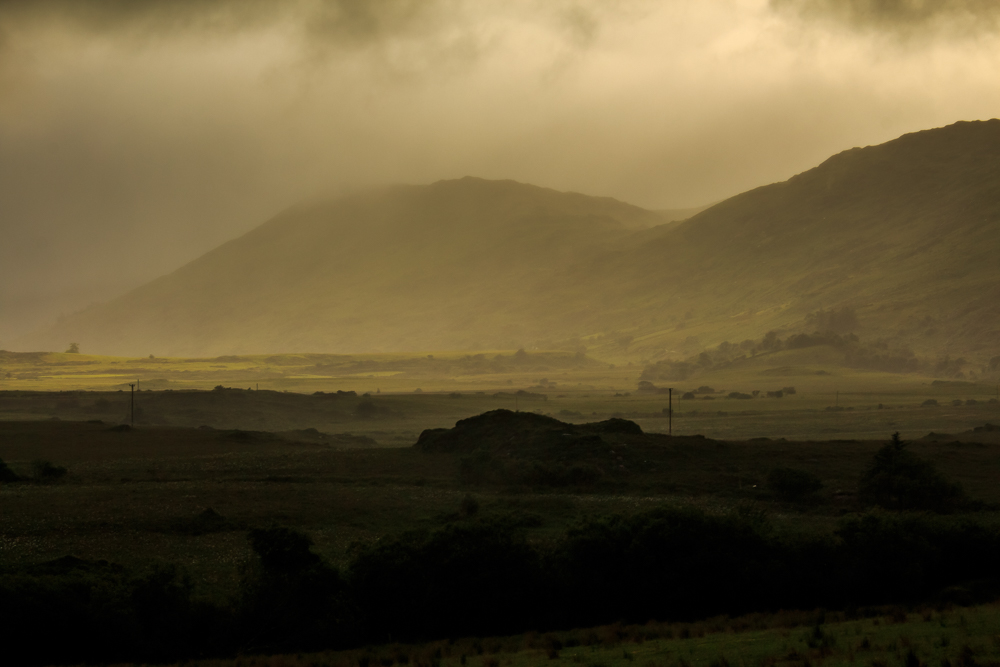 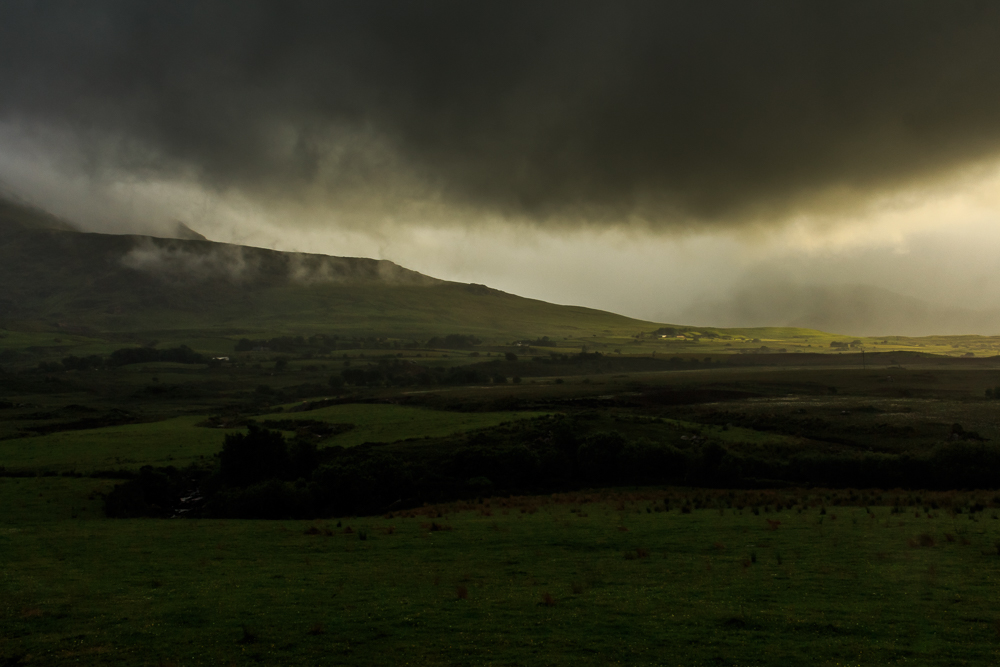 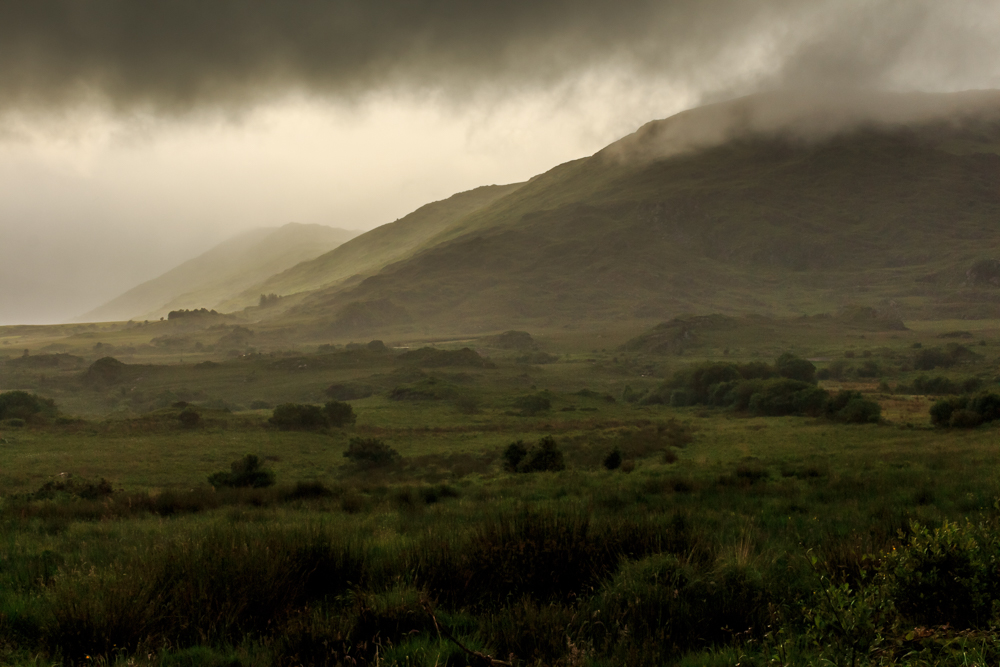 The promise didn’t materialise, but I continued a little further anyway, making a quick stop at Blackstones Bridge on the River Caragh. 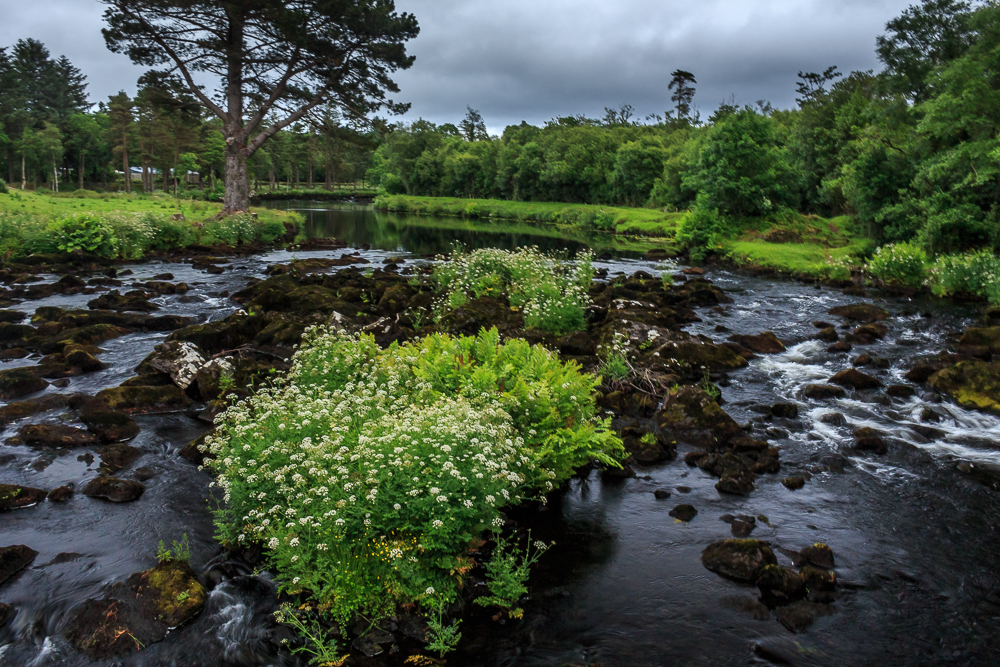 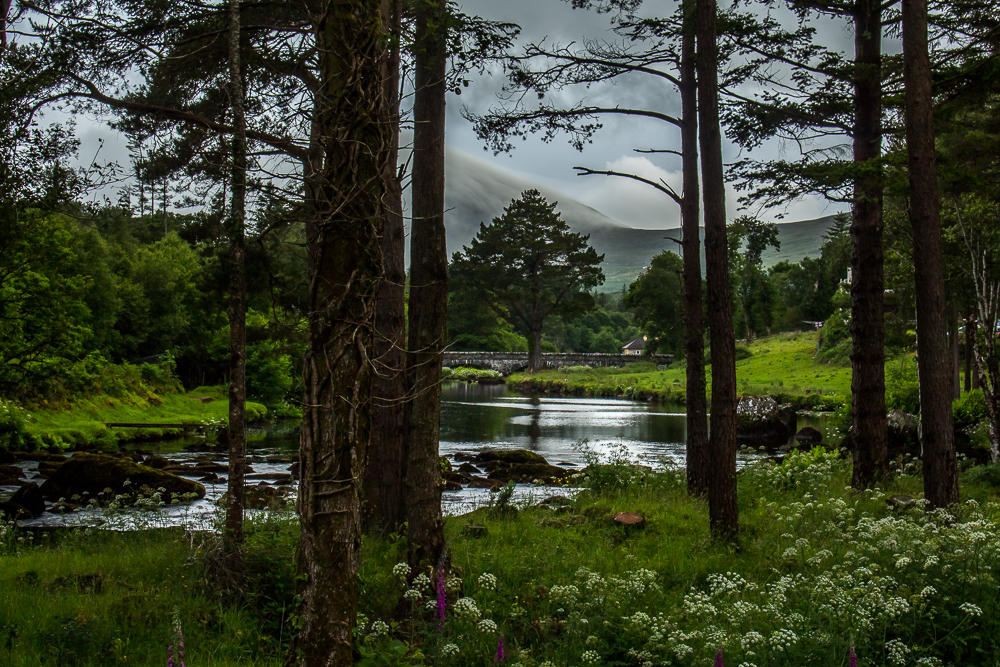 It wasn’t the easiest light for photos, and it was difficult to keep the lens clear of raindrops long enough for a shot, but I continued another little bit until I reached the shores of Lough Caragh where I took a final couple of images. 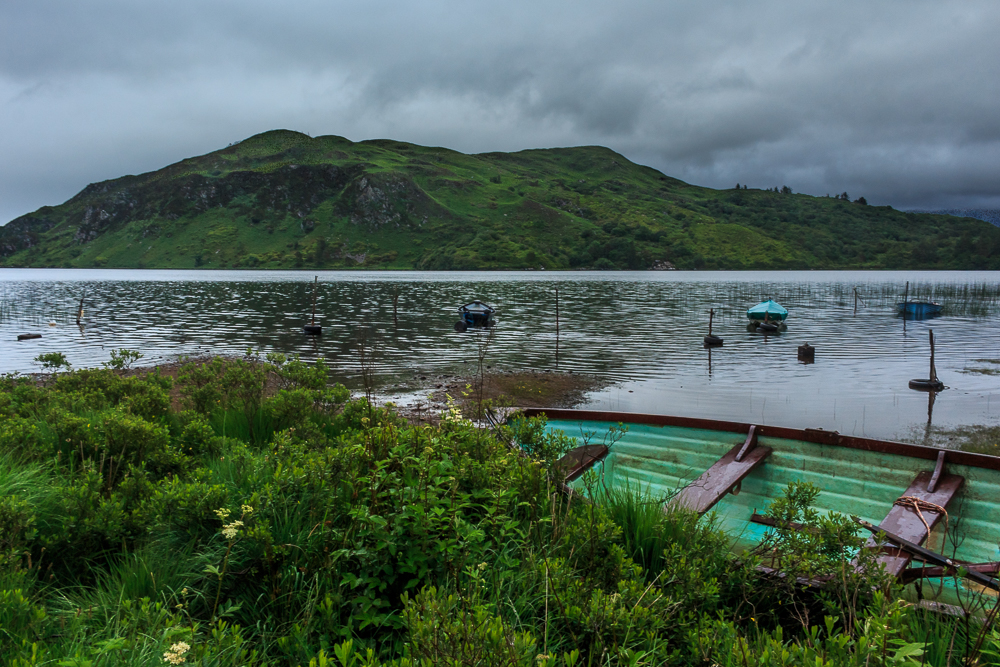 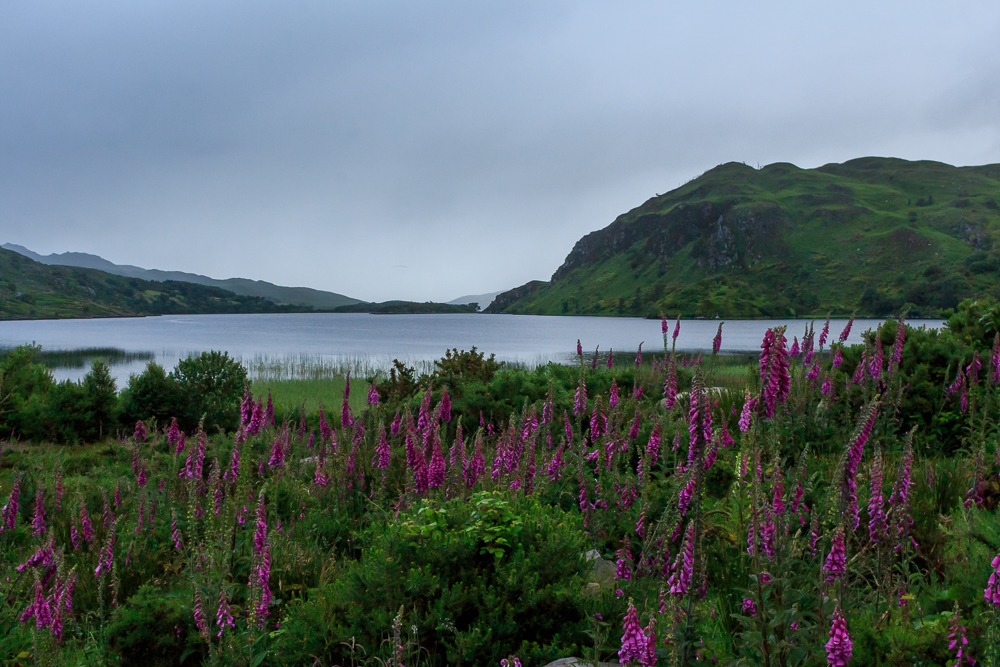 I returned to the remote car park where I would be spending the night, at the start of a track known as the Hydro Road, which can be used to access the Coomloughra Horseshoe.  I spent an uncomfortable night in the car, and woke early hoping for better weather.  Unfortunately, it was even worse, with relentless rain.  After such a long drive down, I decided not to give up yet, and headed off up the Hydro Road, reaching the point where I needed to decide to make for Caher West Top and go round the horseshoe counter clockwise, or ascend Cnoc Iochtair and go clockwise.  I opted for Caher West Top, as although I couldn’t see any of the summits in the low cloud, it looked less steep – I was by now seriously doubting if I would complete the walk, and the easier slope seemed the better option.  As I gained height, the rain got even heavier, and despite my waterproofs, I was soon absolutely soaked through.  Even worse, the wind was gettting stronger and stronger with altitude, to the point where it became difficult to walk.  I was almost blown over several times, and although I was still on safe ground, I realised there was no way I was going to cross the notorious Beenkeragh Ridge in this kind of wind.

As soon as I realised that completing the walk would be impossible, even continuing to bag the summits of Caher and Caher West Top began to seem pointless.  It was miserable walking in the torrential rain, which never let up for even a second, and there would definitely be no views as I was now walking in thick cloud.  I was wet through to my skin, and the sodden ground had penetrated my boots too – I squelched with every step and my feet couldn’t get any wetter.  I would estimate that I was only about 100 meters below the summit of Caher West Top when the wind got to the point where walking became impossible, and I decided enough was enough.  I would have to return to complete the Beenkeragh Ridge, so I might as well leave Caher for another visit too.  I trudged back down to the car park, bitterly disappointed at having come so far for nothing.  The rain was so heavy that it was the only walk I can remember where I couldn’t take the camera out even once!  The photos I had taken the night before were the only ones I would get.

Luckily, I had a towel and spare, dry clothes in the car, so I was at least comfortable as I made the journey home.  Despite the misery and disappointment, I was also determined to come back and have another go at the Coomloughra Horseshoe before the summer ended.

6 thoughts on “Defeated By The Weather In Kerry”