Leaving the summit of Croaghaun SW Top and getting a brief glimpse through the clouds down the cliffs to the sea far below.

I was walking Croaghaun mountain, taking in Croaghaun SW Top on the way, after having already summited Slievemore earlier in the day.  So far, the weather I’d had, had been spectacular.  Not exactly summer sunshine, but the mixture of sun with stormy clouds had made for great views.  However, just below the summit of Croaghaun SW Top, it appeared that luck had deserted me, and thick cloud closed in around me, restricting the views to a few meters in each direction.  I tried to wait it out, hoping for a change, but in the end, I left the SW Top with the expected views, particularly down on to Achill Head, being denied.

As I made my way up to Croaghaun itself, I could just hear the sea far below over the sound of the now howling wind.  Occasionally, the clouds would part enough to give me a glimpse part of the way down the cliffs, dropping away into grey nothingness on my left side.  It was a strange experience to be walking beside huge drops that I knew to be there, but seeing nothing.  I cautiously favoured the more gentle slope on my right hand side.  As I arrived at the cairn on top of Croaghaun, I resigned myself to having no views there either, and consoled myself that I couldn’t complain, having had a fantastic day of walking.

Still, the Irish weather is notoriously unpredictable, particularly here on the western edge, jutting out into the Atlantic on a mountaintop, and maybe I was wrong to give up hope!

Croaghaun SW Top as I left. 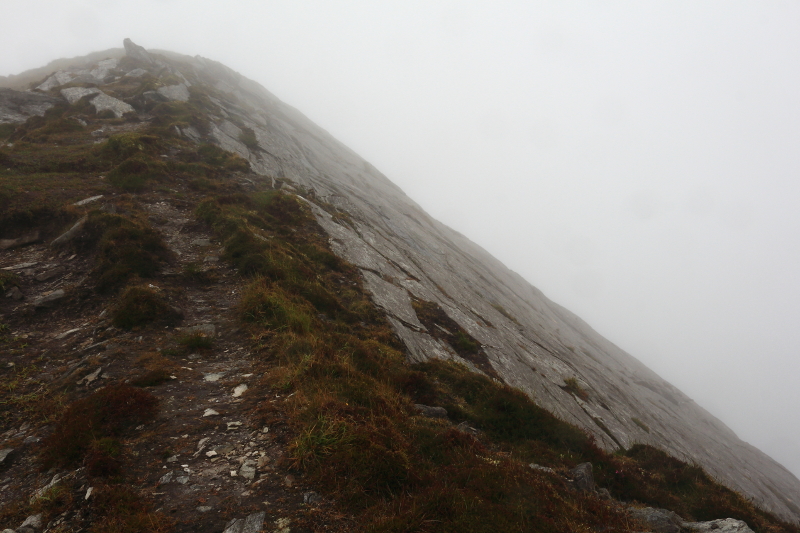 Slabs of rock falling away into the grey void below the SW Top. 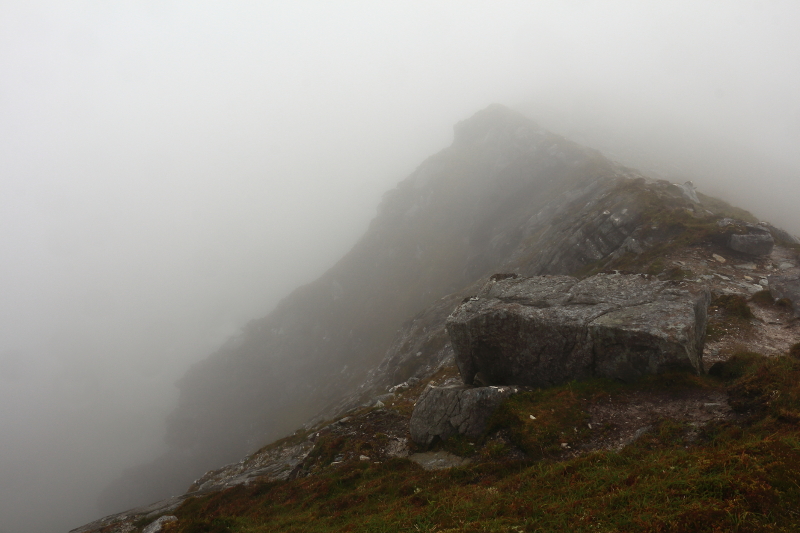 A little glimpse of the drops to my right, with the sea being still hidden.

A look back at the SW Top – stepping on to that sloping rock would be a bad mistake! 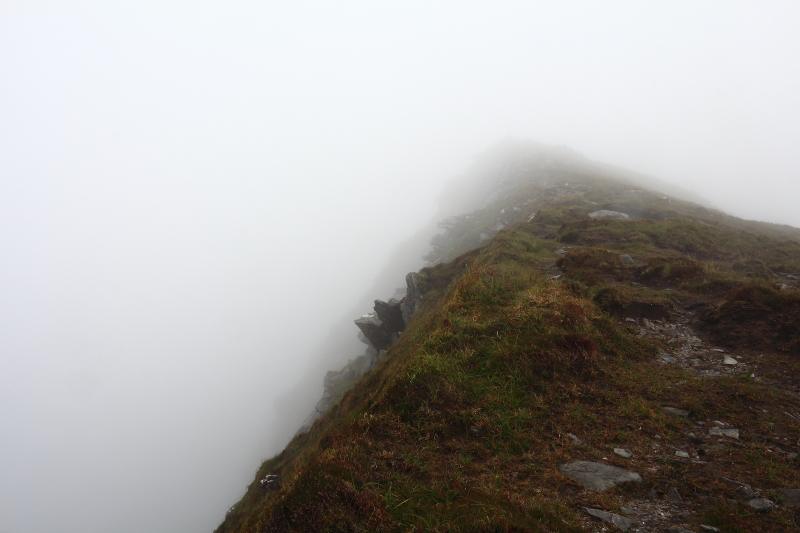 A teasing glimpse of blue as the sea briefly appeared, but seconds later, the clouds closed in again.

Croaghaun’s main top ahead, seeming to loom large in the cloud, but in reality, it was a short climb.

I was dropping down here to the lowest point between the two peaks, and the gap was acting as a funnel, with extremely strong winds.

Looking up to the summit. 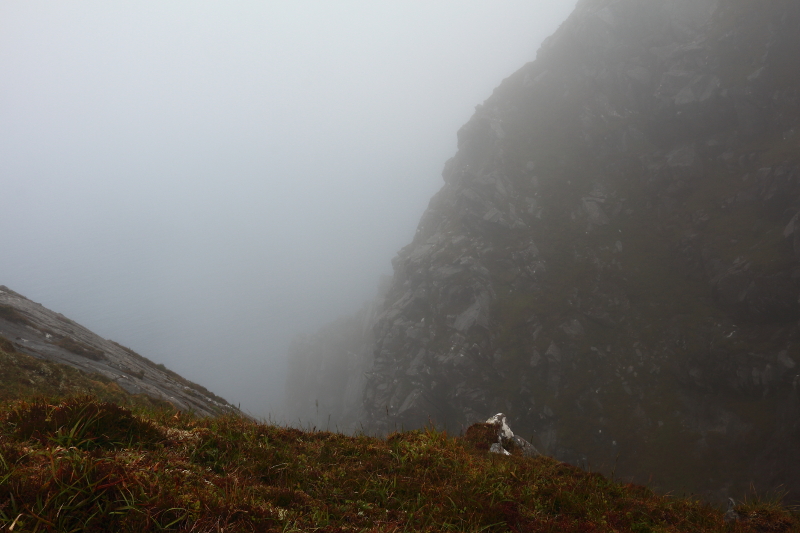 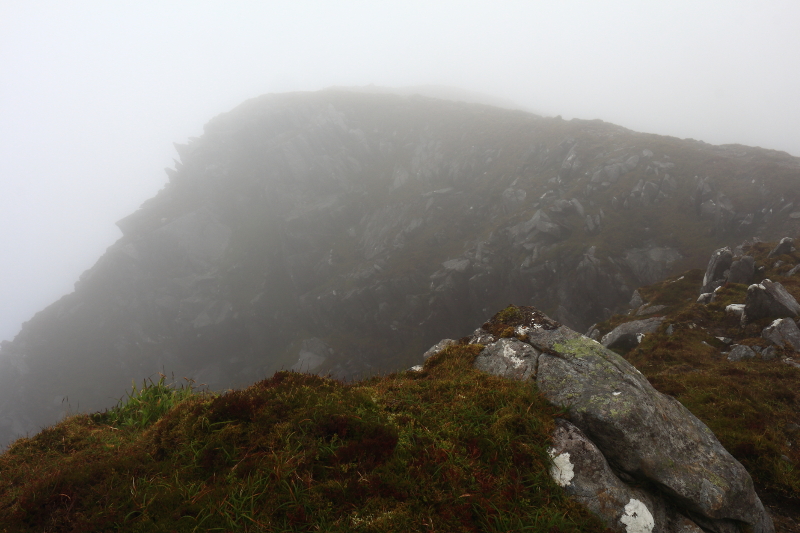 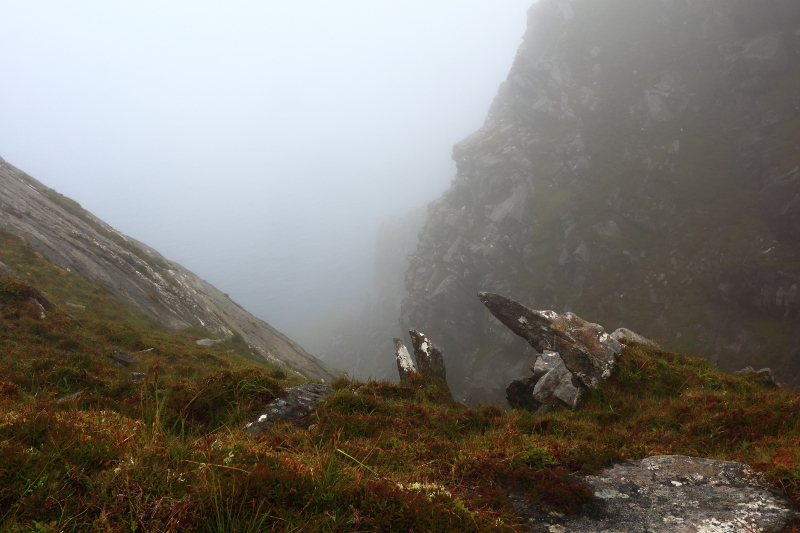 Another, tiny hint of the sea below.

The low point in the gap allowed some views of the cliffs dropping from the SW Top here, and Croaghaun proper ahead.

Cliffs rising to Croaghuan on the right, and SW Top on the left.

The veil parting again for another brief look at the sea.

The summit cairn ahead.

At the summit, alas with no views. 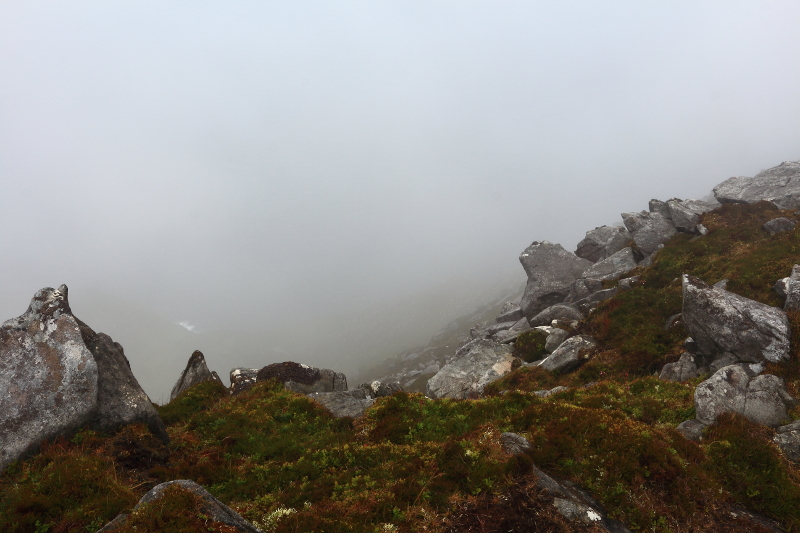 Surf hitting the base of the cliffs far below shines through the cloud.

I wandered past the summit, further east a little, delaying my departure and regretting the lack of views.  Eventually, just as I was giving up hope, and preparing to start back down again, the mountain gods smiled on me, and the world below began to appear, details and colour emerging like a developing photograph.

Achill Head appearing through the mist, from behind Croaghaun SW Top.

In the next post, I try to take advantage of the views while they last, fearing they will disappear as quickly as they appeared.

2 thoughts on “Croaghaun: In The Clouds”