Setting off from above Keem Beach.

I’d had a fantastic morning hill walking on Slievemore on Achill Island, with some of the best views in Ireland, and great weather to show them off.  I was now setting off on my second climb of the day, on Achill’s other mountain, Croaghaun.  This walk would in fact take in two summits as Croaghaun has a subsidiary summit, Croaghaun SW Top.  This second summit would be easily included as the two tops are very close together and have little ascent and descent between them.  I parked at the beach car park at Keem, and headed northwest up the southern face of the mountain, making for the SW Top first.

Initially, the walk took me a short distance over boggy, gently rising ground, but soon, the slope got steeper and the climb began in earnest.  The bulk of the mountain hid the views to the north completely, and also most of those to the west and east.  The views I did have were breathtaking though, and as on Slievemore, the stormy skies, dark scattered clouds and patchy sunlight, showed them in their best light.  The beautiful Keem beach was below me, with Moyteoge Head on its western edge.  Moyteoge Head continued west, leading to a steep ridge, grassy slopes on the landward side and cliffs on the seaward side, rising up to Benmore Hill and on to Achill Head.  The ridge could be included in this walk, but having done Slievemore in the morning, I wasn’t sure I had the energy for it today.  I decided to leave it for another time, and concentrate on Croaghaun for now.  Looking beyond Keem, the vista included Minaun with its spectacular sea cliffs, Clare Island, Croagh Patrick in the distance, and even further, an array of mountains and islands along the west coast of Mayo and Galway.

View towards Minaun and its cliffs with Croagh Patrick in the distance on the right. 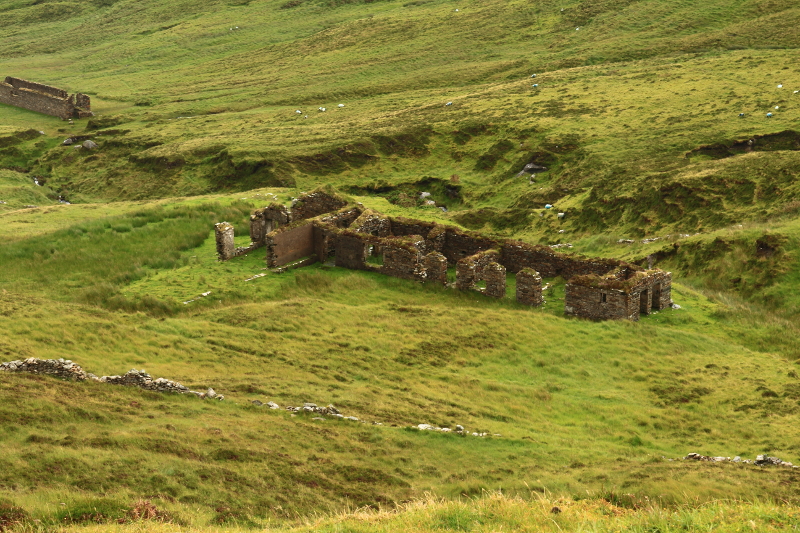 Looking over to the Benmore/Achill Head ridge. 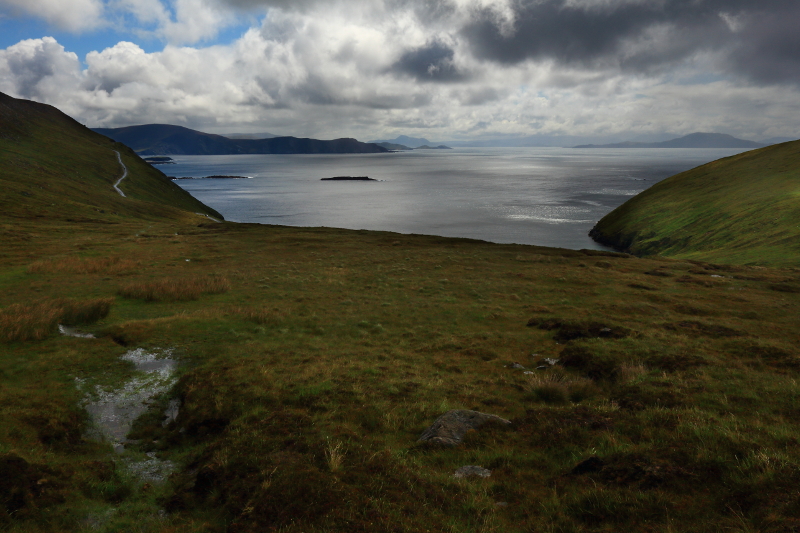 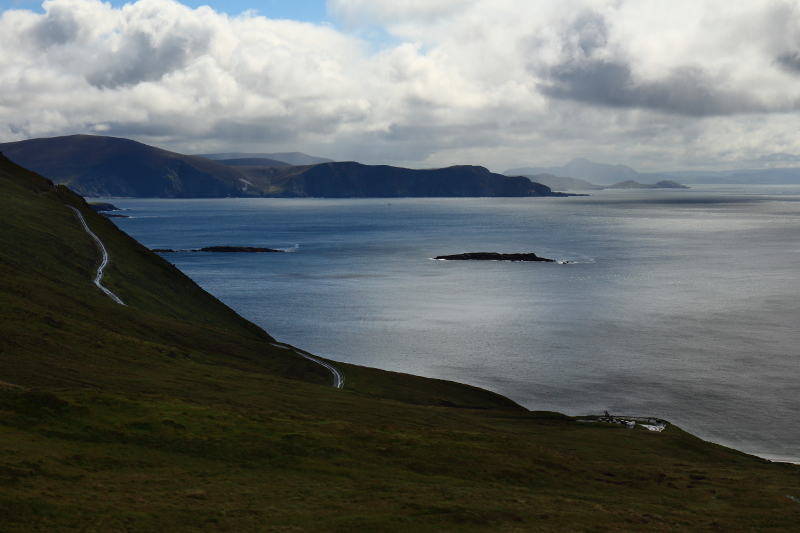 The coast road where it starts to drop down to Keem, with Minaun behind.

Clare Island on the horizon. 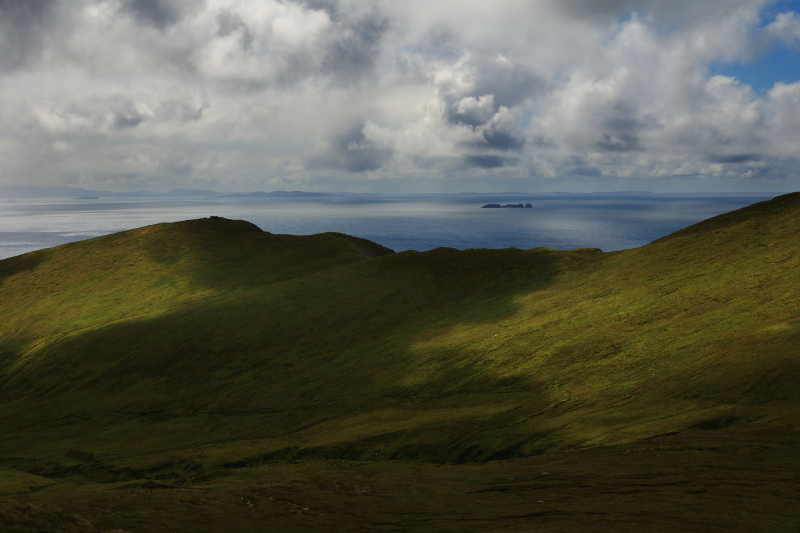 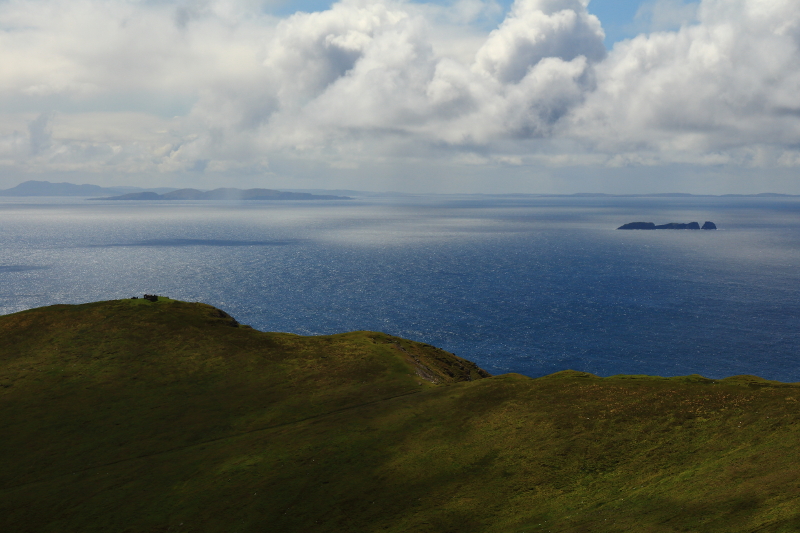 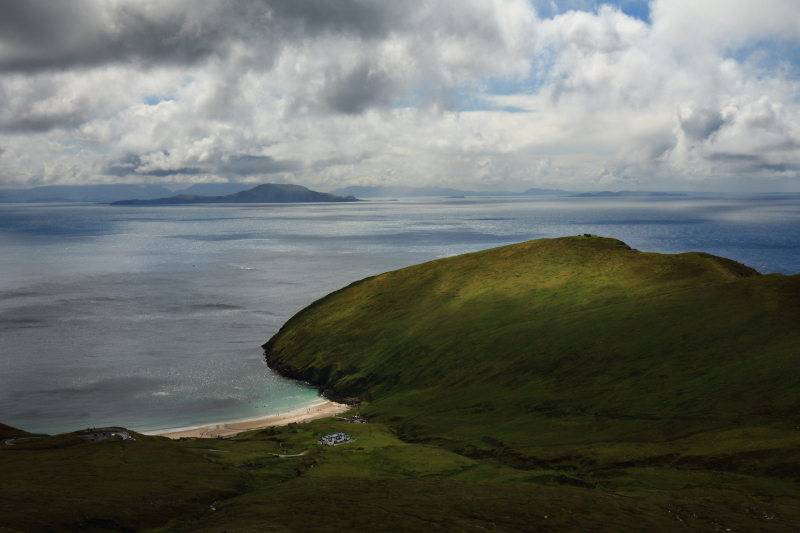 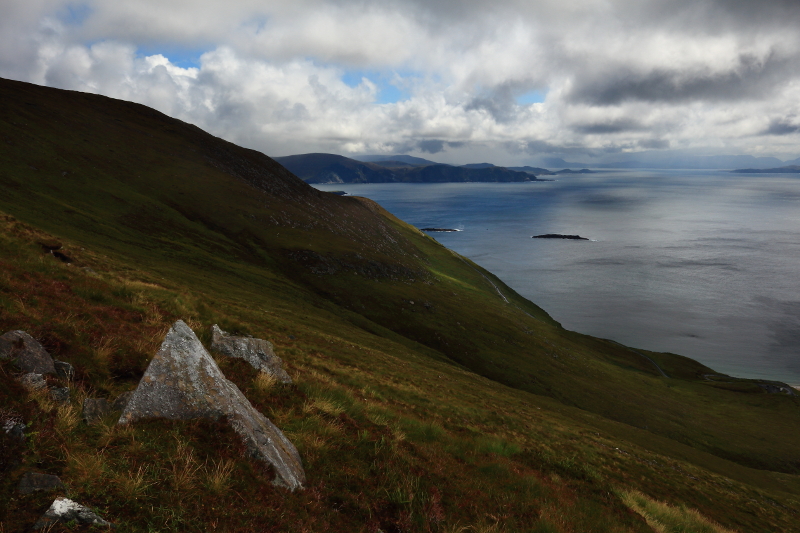 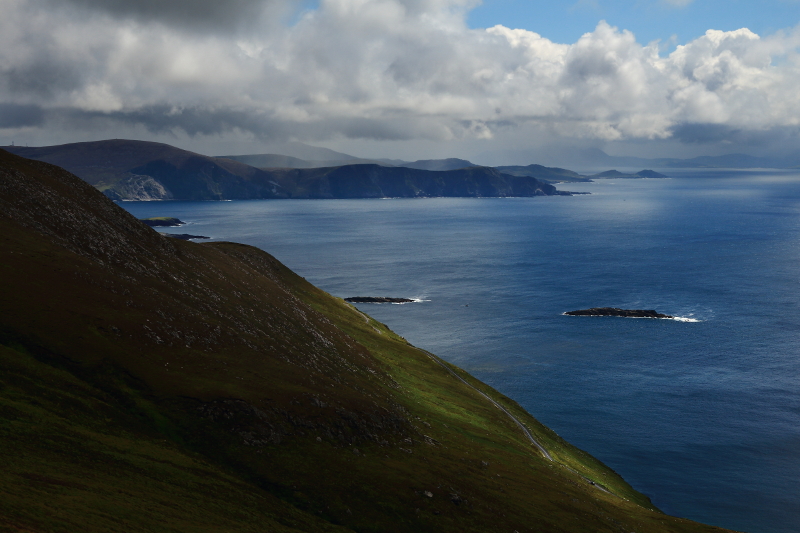 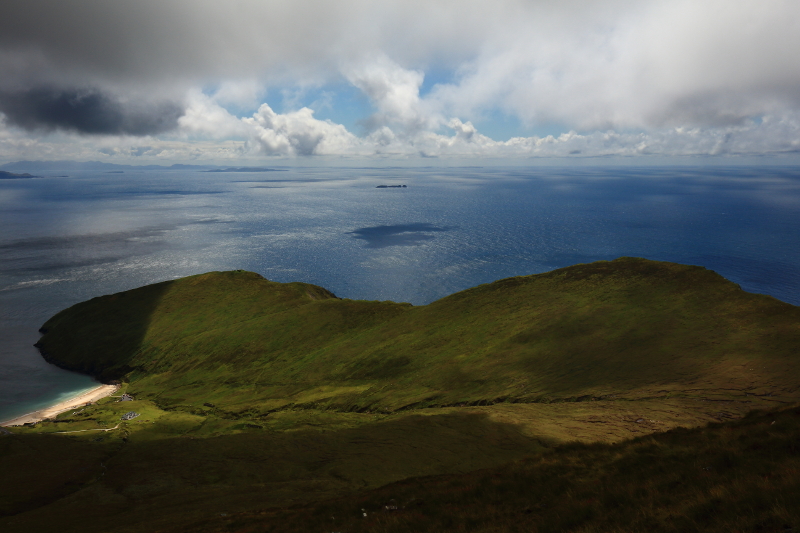 Views to the east opening up with increased height.

I wasn’t far from the summit of Croaghaun SW Top now, and sat for a rest before the final push up on the ridge between it and Croaghaun.  As I sat, the clouds suddenly raced in, around and over the mountain at my back.  It created an amazing view as they quickly swept past, rolling down the mountain face, and coming round the western edge, the lower edge well below me and beginning to obscure first the Benmore ridge, then Moyteoge Head beside Keem beach.  The weather to the north had been hidden to me by the mountain so the cloud seemed to come suddenly from nowhere, and it was an unusal and exhilarating spectacle.  Within seconds, I was completely enveloped with all views gone. 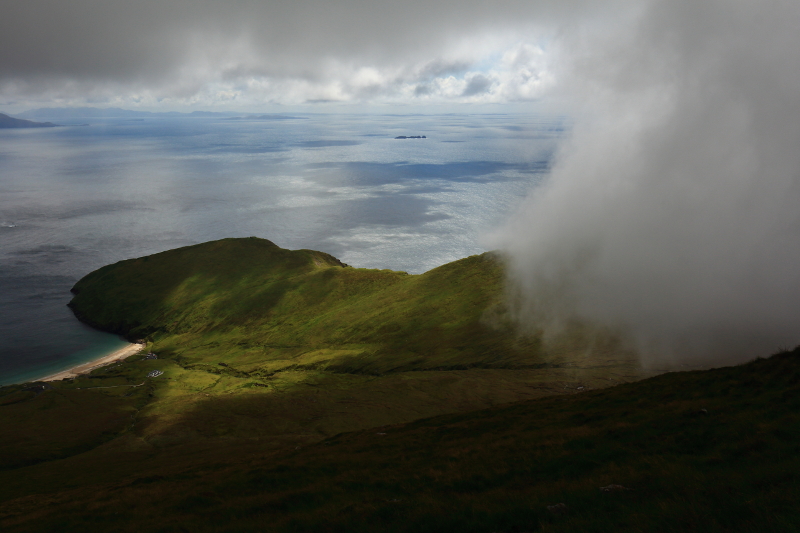 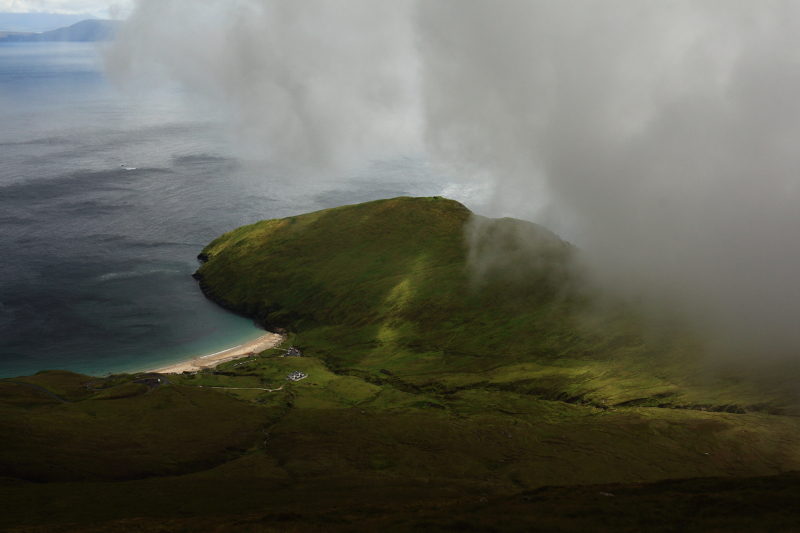 I pushed up through the clouds, with visibility being only a matter of meters in all directions, and arrived on the ridge between Croaghaun and its subsidiary SW Top.  To the south was the slope I had come up, and to the north, were steep cliffs dropping to the Atlantic far below.  It was a strange experience to be standing there in the clouds, knowing there were huge drops below me, but being unable to see more than a few meters down.  The wind was very strong up here, thankfully pushing me away from the cliffs, but the clouds were so thick and featureless, they didn’t seem to be moving.  On the plus side, this was a rare, almost eerie, experience, but the drawback was that I could not see any of the new views west, north or east.  I was on the western side of the ridge, only a few meters from Croaghaun SW Top, and before making for the highest point, I hesitated, peering into the gloom below and around me, hoping it would clear again. 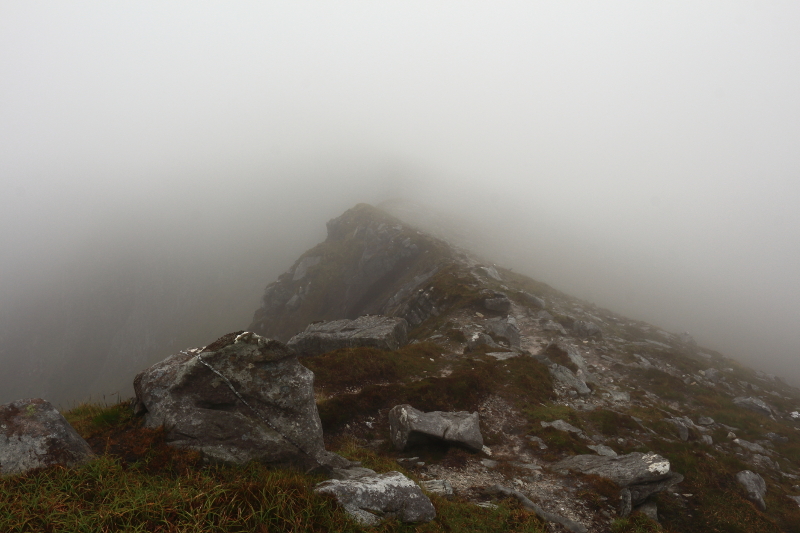 Looking east along the ridge top.  Croaghaun is hidden, and you can only get a sense of the cliffs dropping to the left. 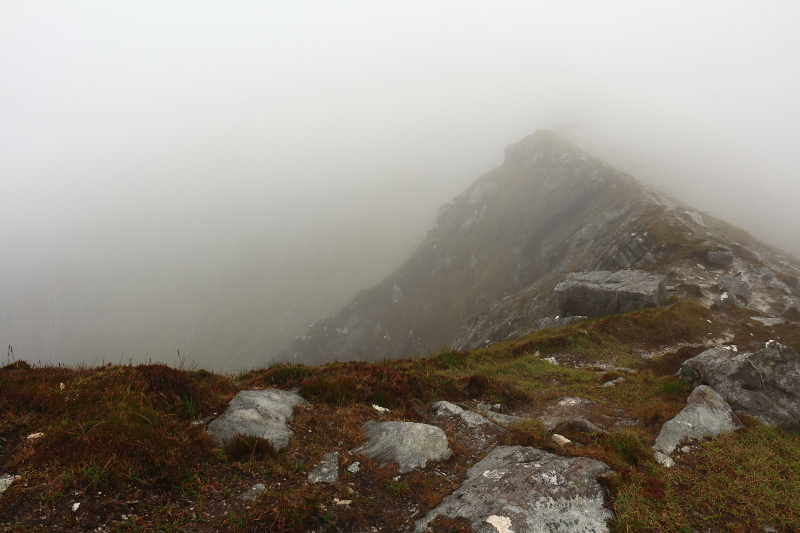 The summit of the SW Top just above me.

A momentary partial clearance, letting me see a little way along the north face of the SW Top.

Trying to peer over the edge of the cliff.  I could hear the sea crashing into the base of the mountain far below, but nothing was visible.

It looked like the views were gone for the day, so I swallowed my disappointment and stepped up to the summit.  The wind was howling, and I could hear the sea far beneath, but there was nothing to see.  It was oddly enjoyable and dramatic, but I would have loved those views.  Instead, I stood briefly on the top, before heading east along the cliff top for Croaghaun itself.

Another partial glimpse of the jagged western slope dropping away to the sea from the summit, but the clouds soon closed in again, obscuring even this short view.

The walk over to Croaghaun continuing in my next post.