On Ben Goram looking back to Croagh Patrick and Clew Bay.

Continued from Part 2.  It had been a tiring climb up the Pilgrim Path to the summit of Croagh Patrick on a hot summer day, but after a good rest and snacks, we were reinvigorated enough to chose a long route down over neighbouring Ben Goram.  There would be a steep climb down the scree covered western slope of Croagh Patrick on to a grassier looking bulge lower down, then another shorter drop on to the col between Croagh Patrick and the 559 metre high Ben Goram.

The beginning of the scree covered drop down Croagh Patrick’s western side. 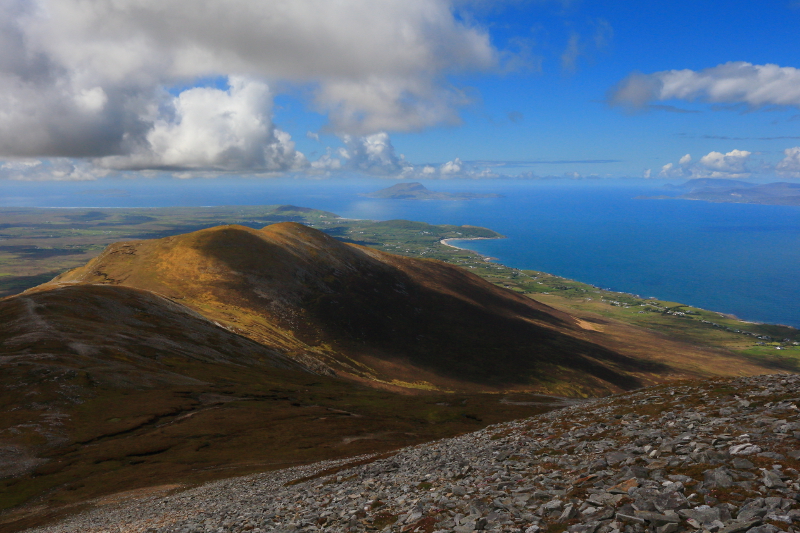 There was a lot of slipping and sliding as the scree shifted under our feet on this steep slope.  The twin summits of Ben Goram ahead are catching the sun. 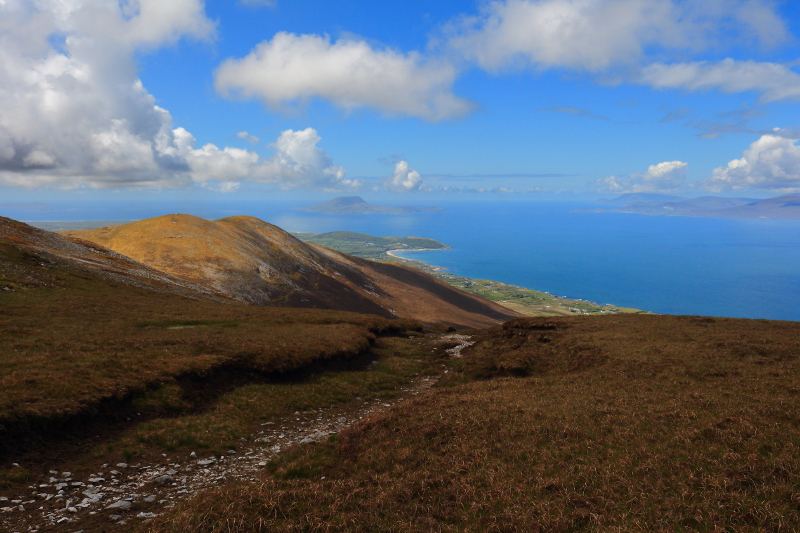 Dropping down below the scree. 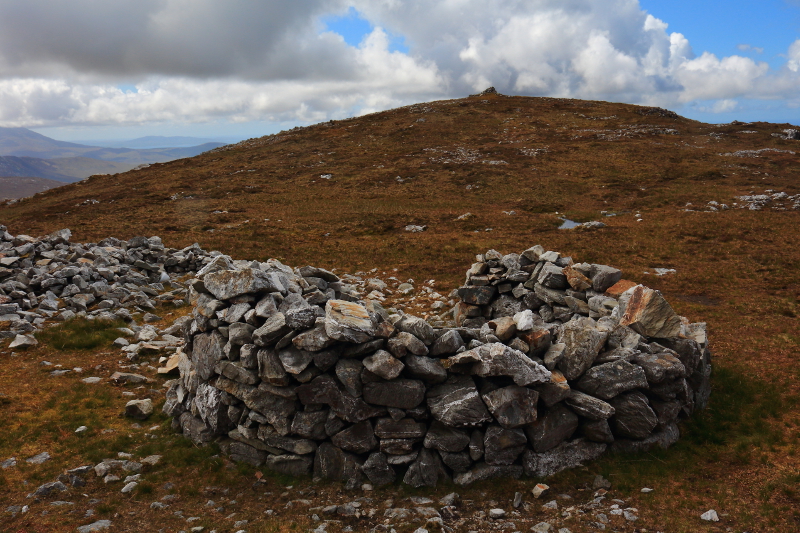 A stone shelter on the way down from Croagh Patrick.

A cairn marking the route.  Mweelrea in the distance, capped by cloud.

The first “bump” ahead is still part of Croagh Patrick.  Beyond that, the further two rises are the twin summits of Ben Goram. 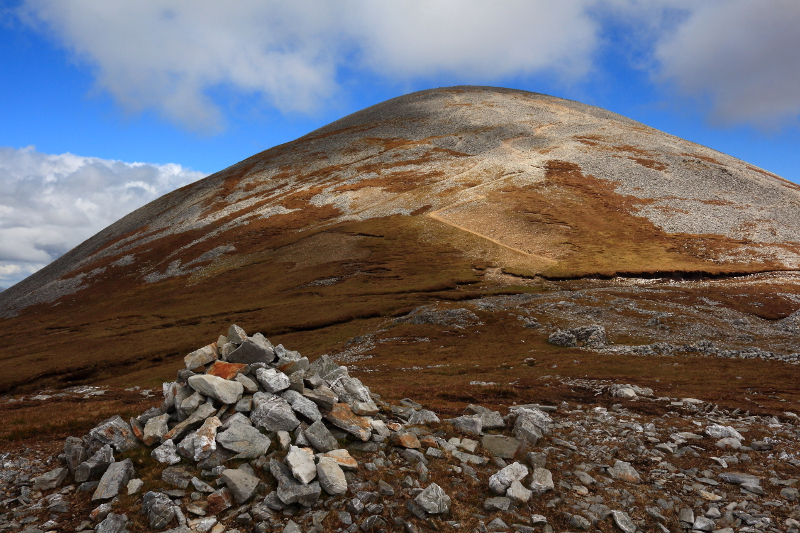 Looking back to Croagh Patrick and the scree covered slope we had just descended.  We had this side of the mountain completely to ourselves in contrast to the heavily travelled eastern side. 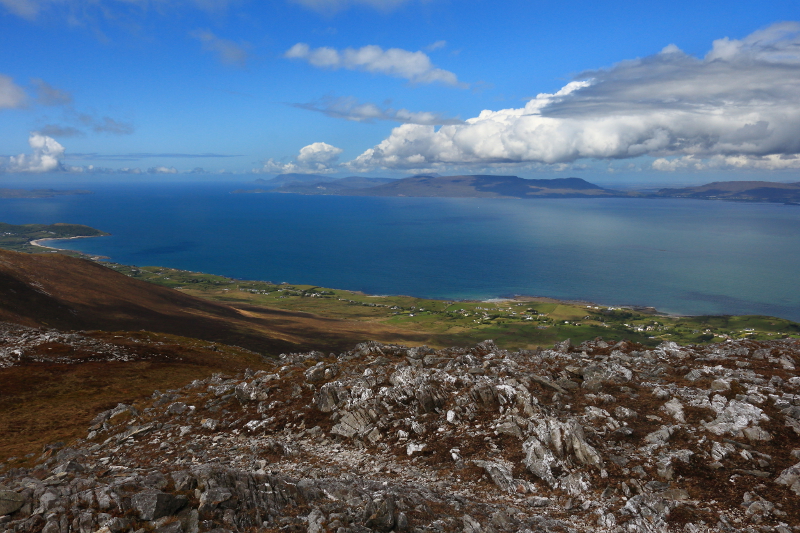 Clare Island still drawing the eye on our way across to Ben Goram. 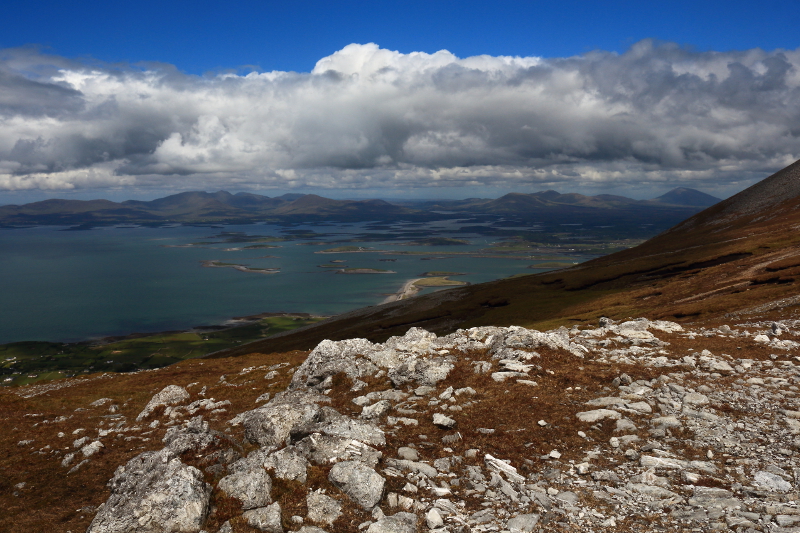 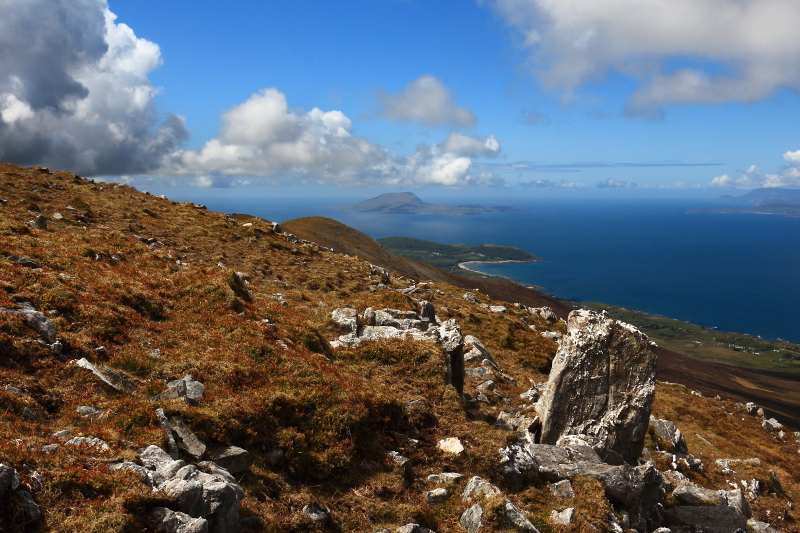 Ben Goram, getting closer, but still looking a bit fair off for our liking at this stage.

The renewed energy we had gained during the rest on Croagh Patrick was now beginning to wear off a little.  My legs at least, were beginning to feel it, particularly the knees on the downward parts, and it still looked like a fair walk down to the col and then up again to the first and highest of Ben Goram’s peaks.  And we had a lot to do even after that.

It is always a little surprising to look back and see how much ground you have actually covered.

An excuse to stop for a breather and watch the bands of light sweeping over Croagh Patrick behind us.

On the slope up to Ben Goram now.

The light catching the summit of Croagh Patrick, making the chapel shine.

Arriving on the summit of Ben Goram.

When we finally reached the point on the col where we started to climb up to Ben Goram, even that short climb felt exhausting to me.  But, at last we reached the top, from the direction we were approaching, on the first of the twin tops of Ben Goram.  I was glad to take the backpack off, sit down and enjoy the views again for a while.

Looking past the cairn on Ben Goram’s summit, back to Croagh Patrick.

The second, lower summit on Ben Goram, a short way ahead on our route. 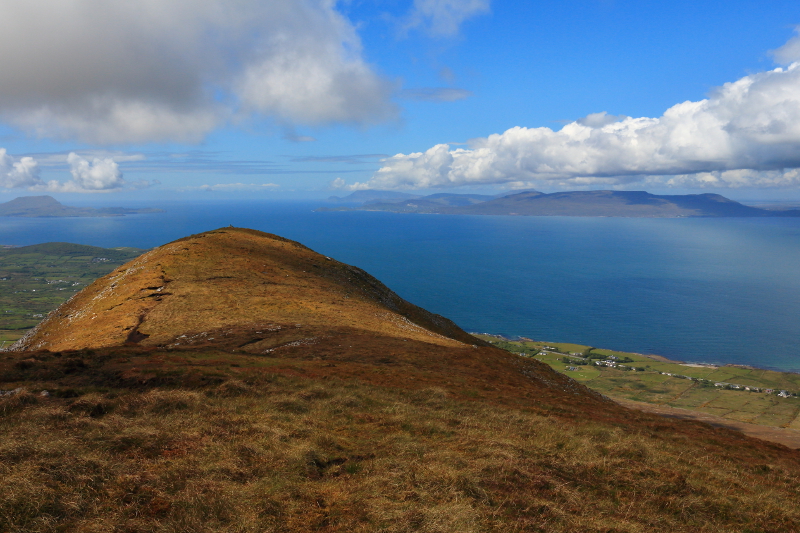 With the batteries recharged again, we started off on the next stage, the short walk over to the second, lower peak on Ben Goram.

Ben Goram’s main summit behind us now, with Croagh Patrick beyond that.

It didn’t take long to reach the second summit, also topped by a cairn.  We all seemed to be able to do less between rests now, and after even the short walk between Ben Goram’s two tops, we were happy to take another break.  Of course, the views all along this walk were staggering, and it was always worth pausing to appreciate them. 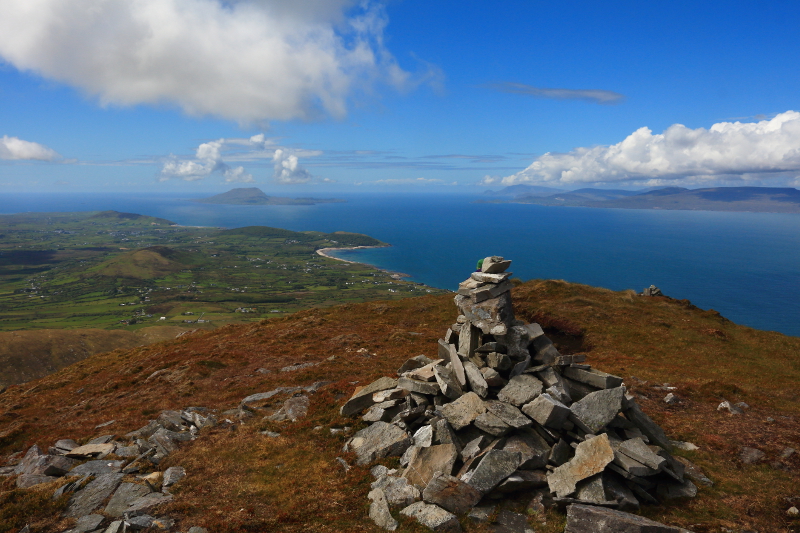 The view from Ben Goram’s lower top.  More of the ground to the west was now revealed, as well as the little beaches, Clare Island, Croaghaun on Achill and all the other sights we had been admiring throughout the walk.

This lower point on Ben Goram was the last target to aim for on the walk, and from now on, we would psychologically be on the return leg.  The problem was, our starting point was in the car park in Murrisk to the east, but we would have to continue west down the slope to a minor road almost at sea level. We would then follow that north to the main road back east along the coast.  In our tired state it seemed hard to be going in the wrong direction, and the descent would be very sore on tired knees.  We could see the coast road below us, and it seemed a long walk – and we had a good way to go to even get to it!  It had been my idea to take this longer route rather than just returning by the same route directly down Croagh Patrick to Murrisk.  My companions had just consented trustingly.  To their credit, they never uttered a word of complaint, although I don’t know what murderous thoughts they were harbouring!  Thankfully, they were probably too tired to follow through on them. 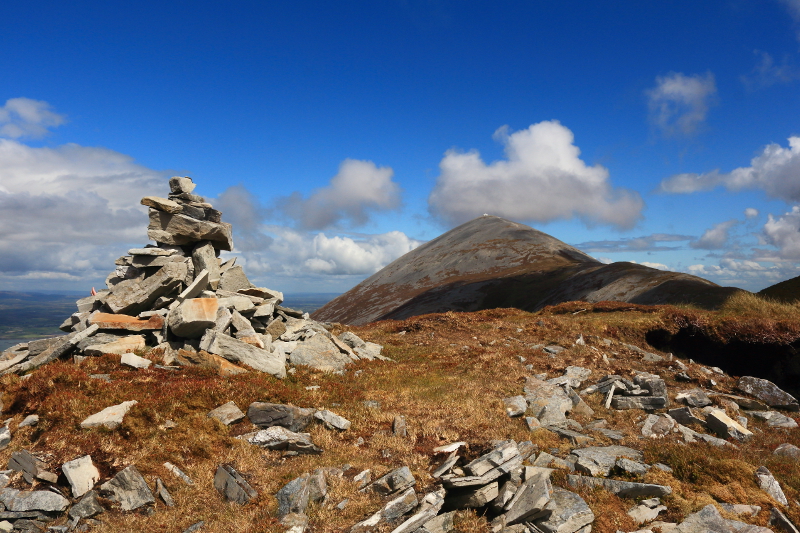 Time to get to our feet again, shoulder the packs, and begin the next leg, dropping down to the west off Ben Goram.