Croagh Patrick from the northeast.

One of Ireland’s most famous mountains is Croagh Patrick, also known as the Reek, which comes from the Irish for stack or mountain.  It is named for St Patrick, who was supposed to have fasted on the summit for forty days, and it was from there that he is said to have banished all the snakes from Ireland (never mind that it seems there never were any snakes in Ireland in the first place).  As a result of this link, Croagh Patrick is also one of the most climbed mountains in the country, being a place of pilgrimage, particularly on Reek Sunday in July, but also throughout the rest of the year.  For some, it will be the only mountain that they ascend.  Many pilgrims making the trek to the chapel at the summit do so barefoot, which must be incredibly painful.  As is often the case, Christianity has hi-jacked an older tradition however, and Croagh Patrick, previously known as Croghan Aigle has always been a sacred place.  It was a place of pilgrimage as far back as 3000 BC for the pre-Christian Irish.  So important was it, that it could not be dismissed by the new religion.  Instead, the Christian Church had to adapt and make the mountain part of its own tradition.  In the same way, St Patrick has been linked with hundreds of other places that were sacred or significant to the ancient Irish, with many wells and springs in particular bearing his name.

Regardless of the religious connections, Croagh Patrick is an impressive mountain, a great conical peak, 764 metres high, rising in near isolation on the southern side of Clew Bay.  It is prominent for miles around, its quartzite top catching the changing light, and has magnificent views from the summit.  It was this, rather than the Christian adoption of the mountain that made me want to climb it.  It was always on my wish list, but I had the perfect excuse in June, when my sister and nephew both expressed a desire to have a go at hill walking, neither having really done it before.  I wanted to make sure they had a good experience for their first top – a good, high, challenging and attractive mountain, with spectacular views, and Croagh Patrick fitted the bill perfectly.  All we would need to guarantee a good impression of hill walking would be decent weather, but that was up to luck.

We set off early in the morning on the long drive down to Mayo in middling weather – dry but overcast.  We could see Croagh Patrick from a fair bit away, looking formidable in the distance.  The two new recruits didn’t know what to expect or how they would cope, and I wasn’t sure what their ability level would be either, and I have to admit, as we looked up at the towering Reek, growing ever larger as we got nearer, I wondered if a smaller, less steep peak would have been more suitable for a first ascent.  As it turned out, I needn’t have worried.  If anything, they were both fitter than me and had no problems.

It was mid morning when we arrived, and we parked in the car park in Murrisk, wasting no time in getting started on the traditional pilgrims’ route up the mountain.  This eroded track initially heads south for the eastern flank of Croagh Patrick, avoiding the steep northern face.  Further up, it turns to the west and goes directly up to the summit.  As we set off, it became apparent, that we were extremely lucky with the weather.  The sun was shining, and the mountain which can often be shrouded in cloud, was fully visible, spurring us on, but also looking worryingly big and steep.

Starting out, with the mountain in the background, and St Patrick himself seeing us off.

The going was fairly steep, but that had the advantage of giving us views almost immediately over Clew Bay, just below to the north.  The bay is studded with islands – half submerged drumlins from the ice age, and it is a stunning sight.  We were gaining altitude quickly, and it was impossible not to stop regularly to look behind and appreciate what each few metres of height was revealing.  For me at least, it also gave a welcome chance to catch my breath and rest the legs.  My (younger) sister was storming ahead, and it was clear that any thoughts I’d had about having to slow my pace to go easy on her, were badly misplaced!  My nephew as lagging with me, but that was only because he was new to this and hence didn’t have any hiking boots.  He was walking over the difficult, rocky ground in light, thin-soled trainers, so I was just about able to keep up with him! 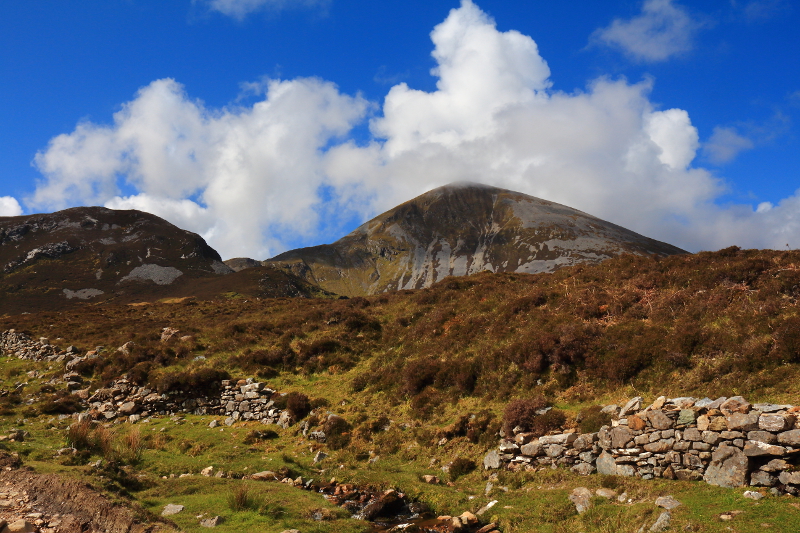 The summit, looking a long way away at this stage.

Clare Island emerging from behind Croagh Patrick’s flank, looking very enticing surrounded by the blue of the sea and sky.

Early views over Clew Bay, with the Nephin Beg range of mountains on the northern shore. 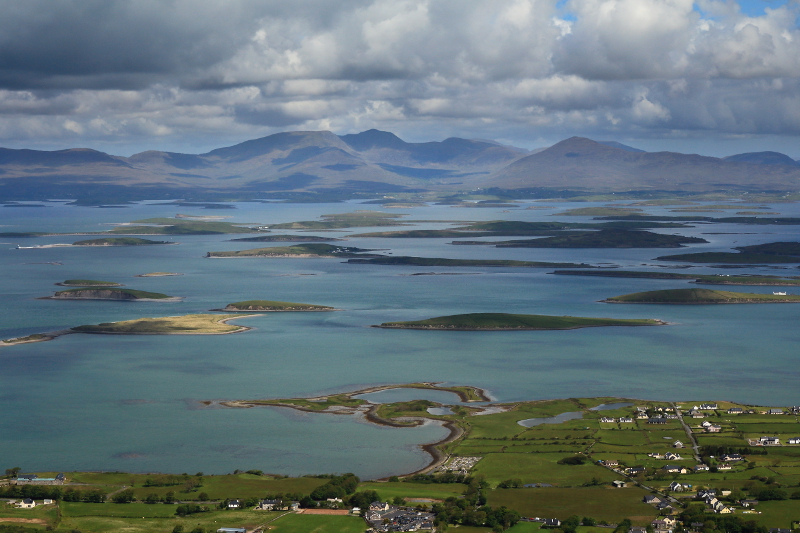 As you can see, I was very taken with this view!  (And, I needed the breaks).

With height, we also began to get increasingly extensive views to the west, with Achill Island and Croaghaun mountain appearing on the western extremity of Clew Bay’s northern side.

Croaghaun mountain on Achill Island to the northwest.

The track was initially heading south for a sort of col between Croagh Patrick and a line of lesser summits on its eastern side.  As we reached the top of the col we got new views to the south, initially to the Sheeffry Hills with the mountains of Connemara and Joyce Country in Co Galway beyond that.  As the track swung west towards the summit, we could also see Mweelrea, the highest mountain in Mayo and Connacht. 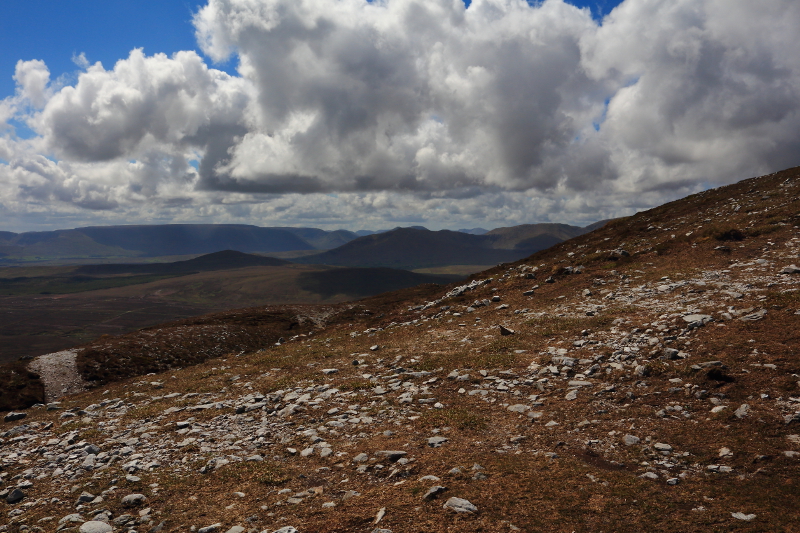 New views to the south.

A cairn where track turns west.  Another conical moutain, Nephin, is prominent on the horizon on the right of the frame. 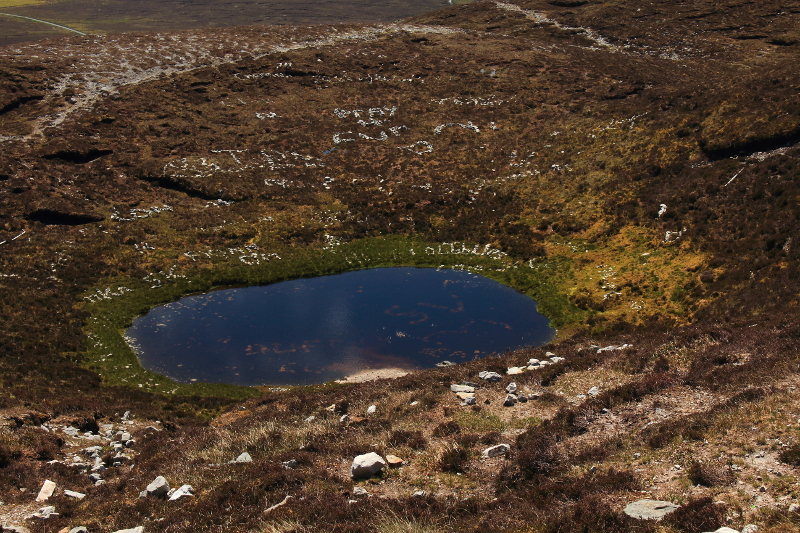 A small lough below us to the southeast, where people have used the quartzite rock to write their names, some even in the water.

All the visitors mean the rare luxury of a toilet block. 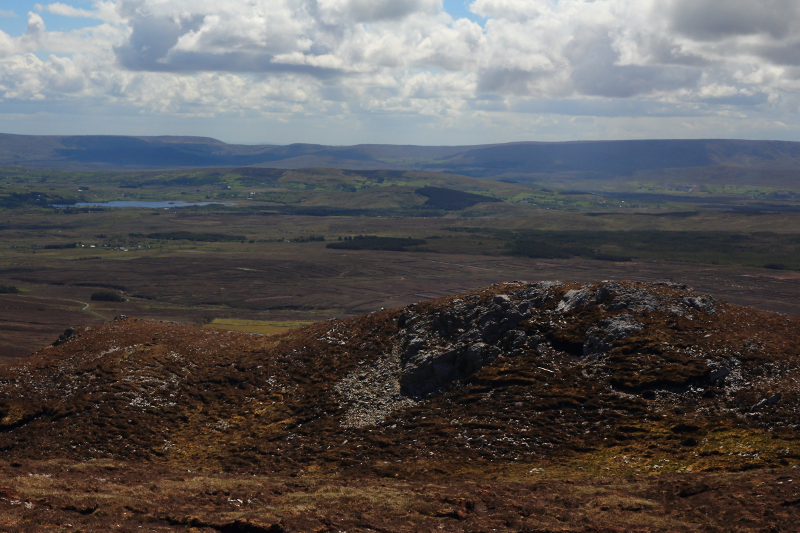 Coming up onto the eastern flank, we could now see Lough na Corra, named for the mythical Irish monster, Caorthannach, said to be the mother of the Devil himself.  Of course, there has to be a connection to St Patrick.  He battled Caorthannach on top of Croagh Patrick for two full days before casting her into Lough na Corra.  Caorthannach escaped and fled to a portal to the underworld in Lough Derg in Co. Donegal.

St Patrick pursued her and finally killed her there, although some say she survives still at the bottom of Lough Derg, waiting for her chance to return. 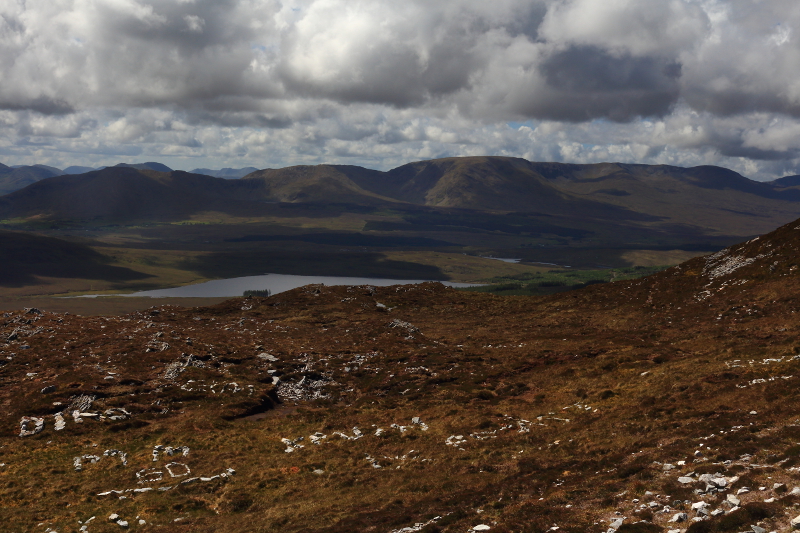 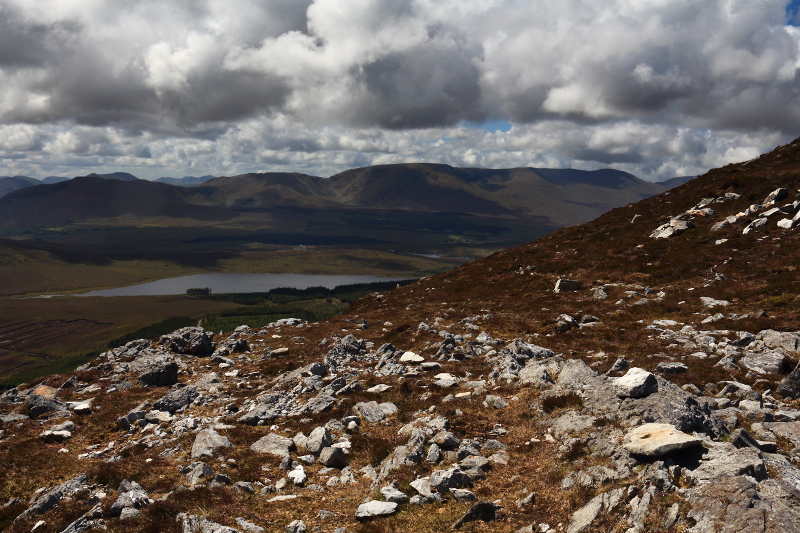 The track ahead with the eroded ground clearly marking the way to the top. 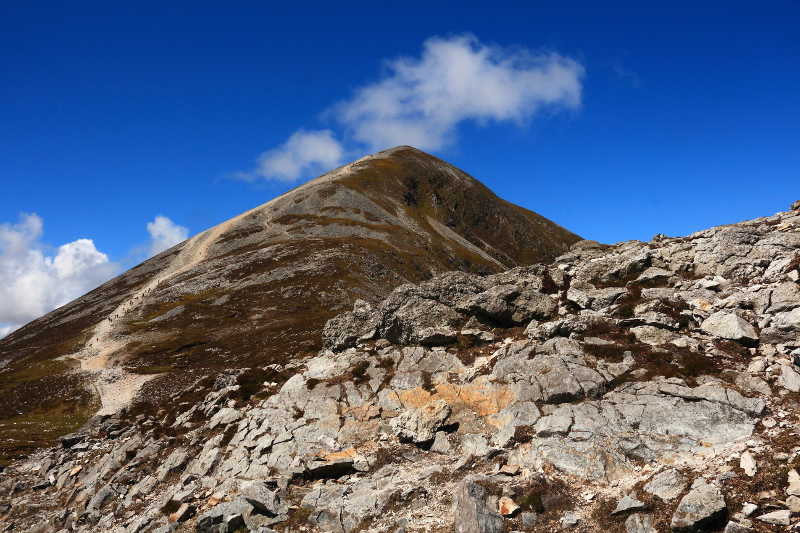 Our luck with the weather still holding up.  I felt obliged at this stage to emphasise to my companions that it wasn’t always like this!  I felt that some horror stories about wind, rain, hail and snow while slogging through bog and swamp would be good for them, and give them an appreciation of some of the suffering I’d gone through, while they enjoyed the sunshine.

Mweelrea on the right end of the mountains in the distance. 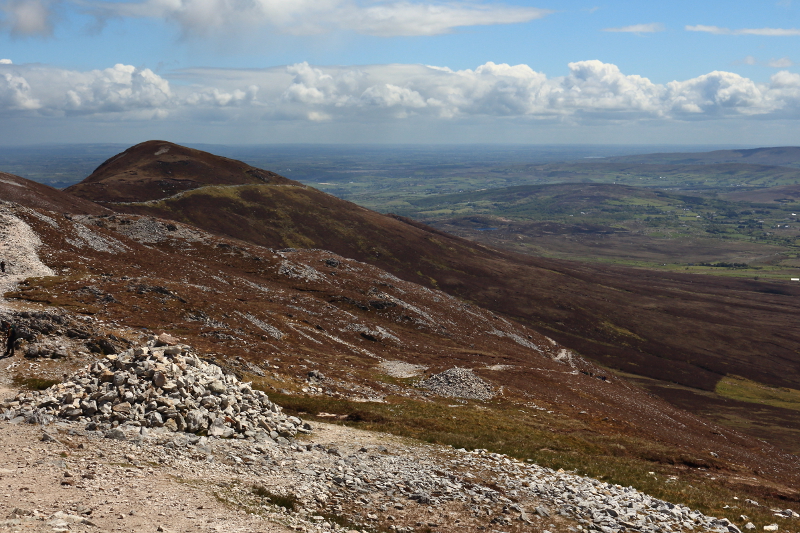 One of the lower summits on Croagh Patrick’s eastern flank.

This second stage of the ascent was on a badly eroded path through quartzite scree.  We were constantly slipping and sliding as the sandy surface on the steep path shifted under our feet.  We would think that it would surely be easier to walk on the scree beside the path instead, but that also shifted and slipped down the slope as we stood on it, and we would lose our footing, with the potential for broken or twisted ankles.  We switched between the grainy sand and the larger scree the whole way up, neither offering easy going.  I don’t know how my nephew managed it with the thin, flexible soled trainers on the  hard, rocks and gradient.

Behind Mweelrea, you can see the sea where Killary Fjord meets the Atlantic, with Co Galway on the far shore.

This was the hardest part of the ascent, and as the summit was hidden by the slope above, we were never sure how close to it we were.  There was now a steady stream of people going up and down, and several also sitting resting along the way.  Those on the descent would assure those on the ascent that they were nearly there, but they’d been saying that for a quite a while, and no-one believed them fully.  But, they had to be telling the truth at some point, and eventually, we caught sight of the chapel sitting incongruously on the summit.

The chapel on the summit.

It is amazing that this is probably Ireland’s most climbed mountain, and done by people of all ages and fitness levels.  We met a woman with her nine year old son on the summit, and the whole way up we had seen both children and some very elderly people.  This is not an easy mountain, but it shows what can be done if you go at your own pace, and take a break when you need it.

We were briefly energised by having made it, and took a quick walk around the summit area drinking in the views.  Then we sat for a much needed rest and refreshments, with our backs against the chapel wall, and what seemed like most of Connacht laid out below us.

11 thoughts on “Croagh Patrick Part 1: To The Summit”