Near the summit of Benbradagh, looking over the Roe Valley.

Overlooking the Roe Valley and the town of Dungiven is a long line of summits formed by Benbradagh at one end with Carn Hill at the other and Boviel Top in the middle.  The group is a northern outlier of the Sperrin Mountains, with Benbradagh being the highest of the three at 465 metres, with Boviel Top coming in at 454 metres and Carn Hill at 448 metres.  Not the biggest peaks, but their relative isolation, rising out of the Roe Valley, and the distinctive shape of Benbradagh in particular, gives them a certain prominence as they are passed by many people every day travelling on the main Belfast/Derry road via the Glenshane Pass.  I set out to walk all three in early May, but as it turned out, only getting Benbradagh and Boviel Top done on this visit.

Benbradagh’s distinctive profile from the lower ground near Dungiven.

From Dungiven I took the minor road that wound its way high up on to the saddle between Benbradagh and Boviel Top, giving me an easy start from an already high position. 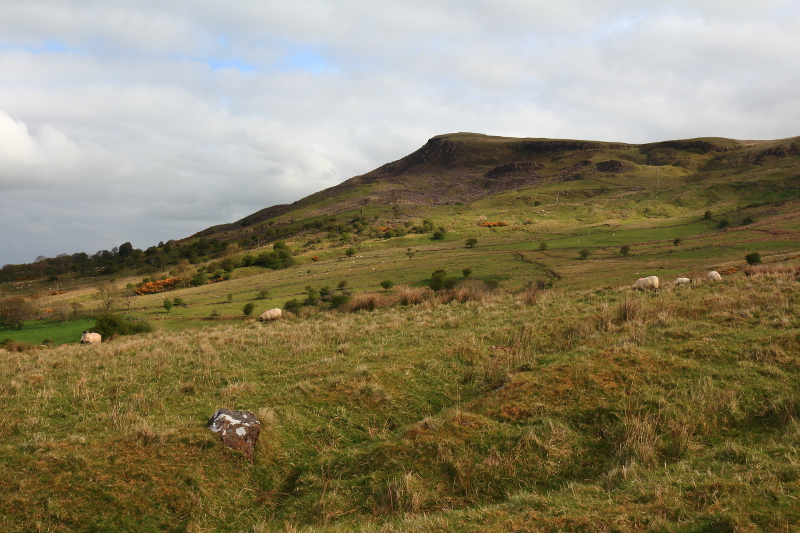 From the road up on to the saddle.

The road comes to a dead end at a car park, with a gravel track leading part of the way, west up towards Benbradagh’s summit.  Already, there were great views down over the rolling countryside around Dungiven, backed by the rest of the Sperrin Mountains.  Looking east, I could see the broad, flattish summit of Boviel Top.

The boggy ground on the broad Boviel Top to the east.

The view over Dungiven to the southwest. 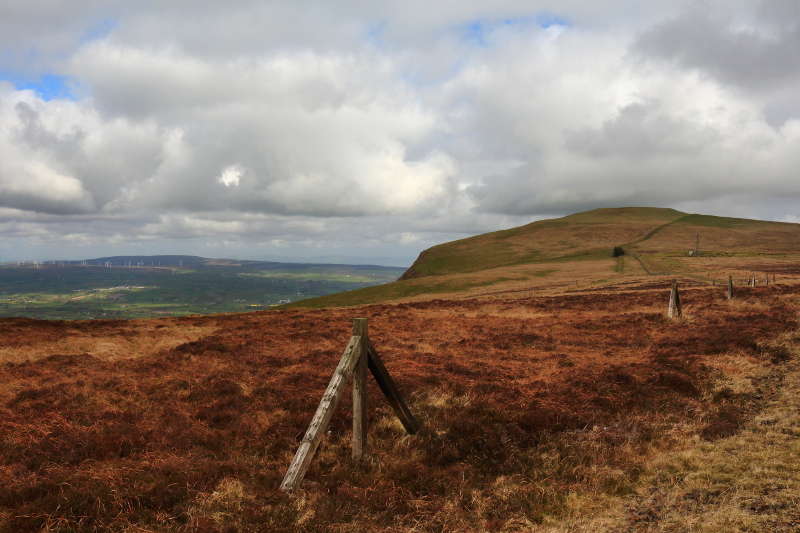 The view up to the grassy summit of Benbradagh.

It was proving to be an easy and enjoyable stroll along the track towards the top, looking down towards Dungiven.  Ahead I could see the end of the track, a little stand of pine trees, and the grassy summit area which would also provide easy conditions underfoot even when the track ran out. 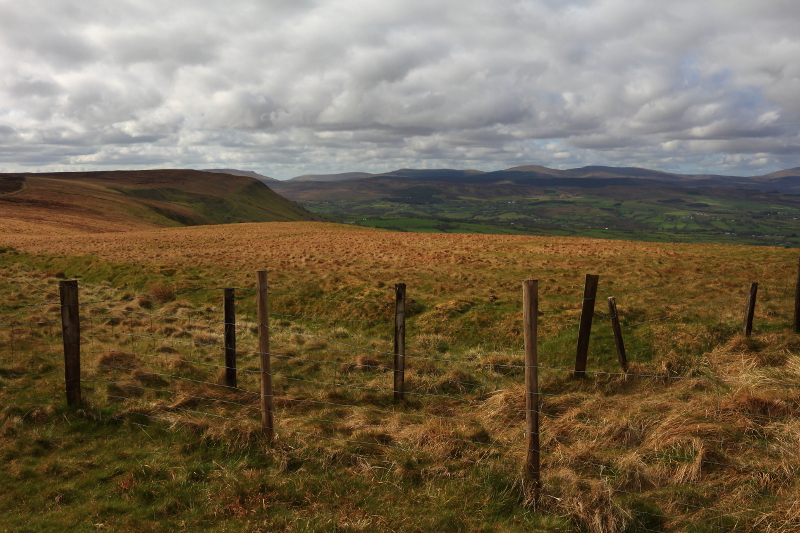 A look towards Boviel Top. 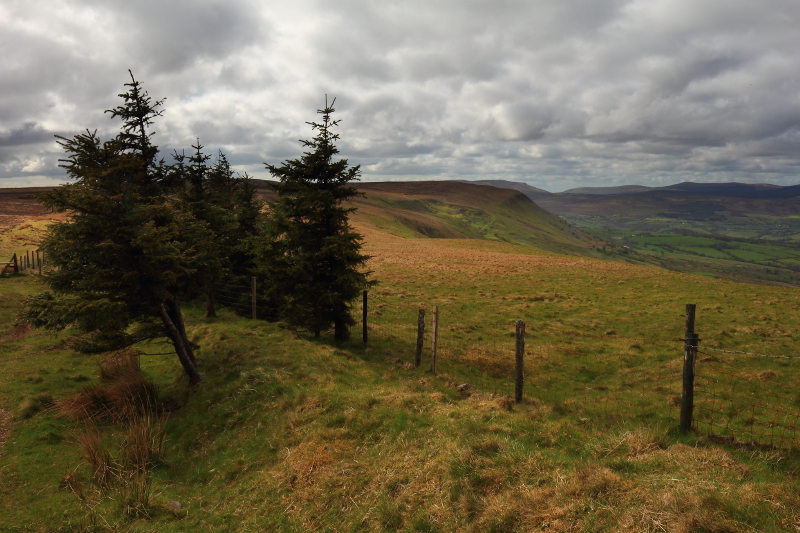 Passing the isolated stand of trees. 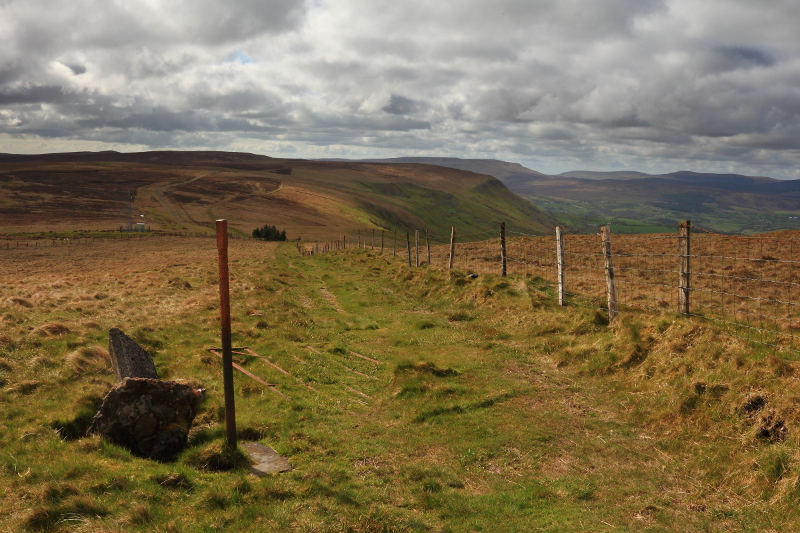 A little futher on, and the walking was still easy.

Near the top, and I was amazed to be walking on short grass and dry ground, rather than battling across bog and peat hags, heather and tussocky grass – most un-Sperrinlike!

At the top, I was able to look down over the steep northern and western sides of the summit over the Roe Valley, the sweeping view taking in the Sperrins, Lough Foyle, Inishowen and Binevenagh.  It was hazy in the east, but I thought I could make out a glimpse of Lough Neagh.

Towards Lough Foyle and Binevenagh in the north. 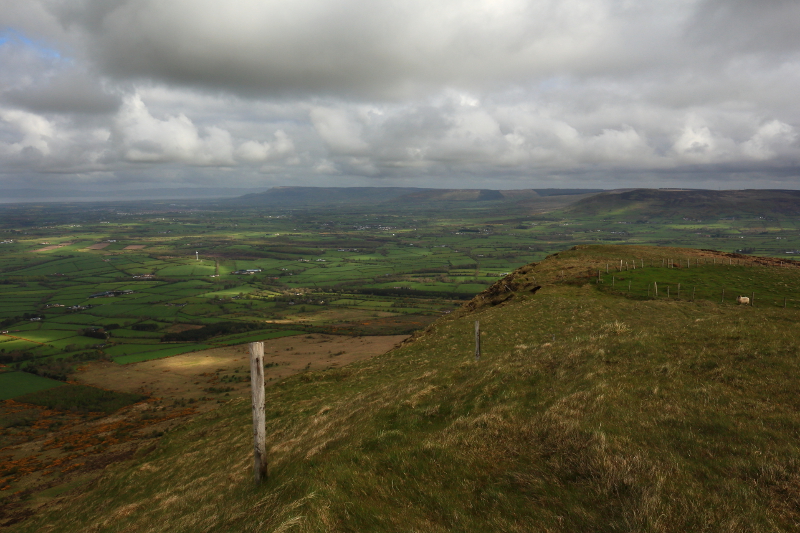 Across the countryside to Limavady, with Binevenagh beyond.

A rapeseed field far below catching the sunlight.

The summit sloped gently to a lower point a little way to the north, and I wandered down enjoying the views.  I disturbed a peregrine falcon on the way, and it circled high overhead, too far for my wide lens, scolding me for the intrusion.

Looking back up at the summit from the lower slope to the north.

Lough Foyle, with Inishowen on the far shore.

Evidence of slow landslides and slippage on the steep slopes. 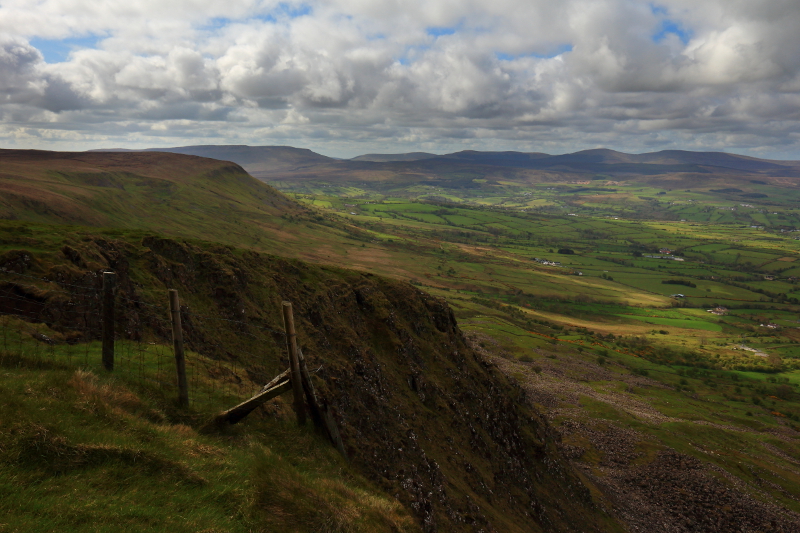 Its hard to beat the challenge and satisfaction of getting to the top of a tough mountain, but I have to admit, I enjoyed the easy walk from my high start on Benbradagh, and loved the dry ground and great views from its steep sided summit.  I was in high spirits as I set off back eastwards towards Boviel Top in the other direction from the car park I had started from. 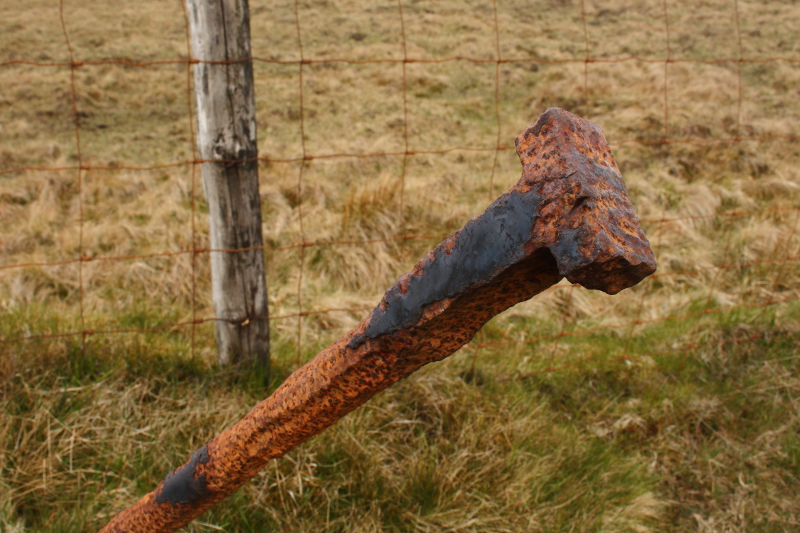 Back at the little group of trees with Boviel Top on the left of the frame.

On the way back I paused at the pine trees for a few close-ups.

Further on, I passed my starting point and continued east to Boviel Top.  There was no track here, and straight away on the open hillside, I was struggling through the more usual deep heather and rough grass.  The ground got progressively boggy, soon becoming one of the wettest hills I’ve ever encountered.  Maybe I’d been spoiled by doing the less wild Benbradagh first, but as I struggled across Boviel Top, I couldn’t help finding it a bit of a chore.  The broad flat summit also dominated the fore and middle ground, making the views less expansive, and to mirror my mood, the sky clouded over, darkening the now gloomy landscape.

Heading up Boviel Top, starting to look featureless and gloomy.

As I squelched my way upwards on hard terrain I was having to take long detours to avoid large bog pools and deep water filled ditches, and even the summit was hard to identify, with several bumps vying for the honour.  I felt duty bound to visit each of the contenders to be content that I had “bagged” the summit, each one involving a torturous detour.

Looking over at Carn Hill.

My plan had been to continue on to Carn Hill, but from Bovial Top, it looked like more of the same terrain, and I decided that it could wait for another time.  The return trip would be about 4km and I didn’t fancy it now.  Instead, I started what felt like a slog, back to the road. 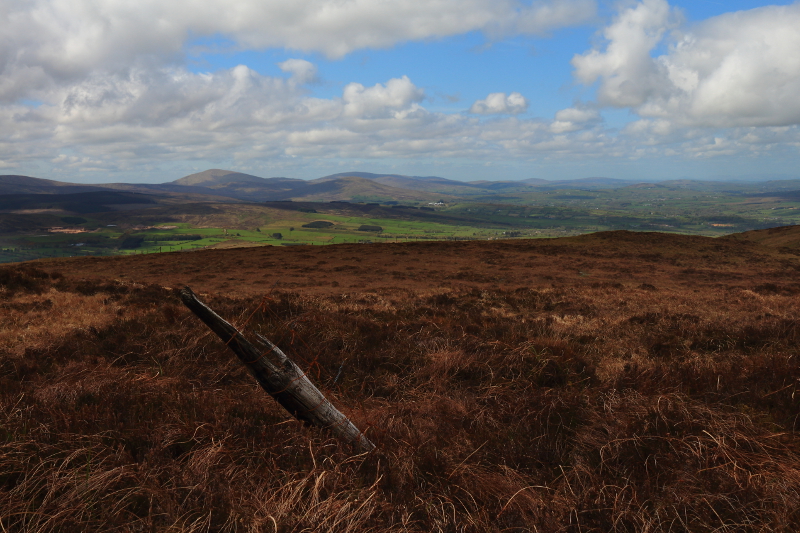 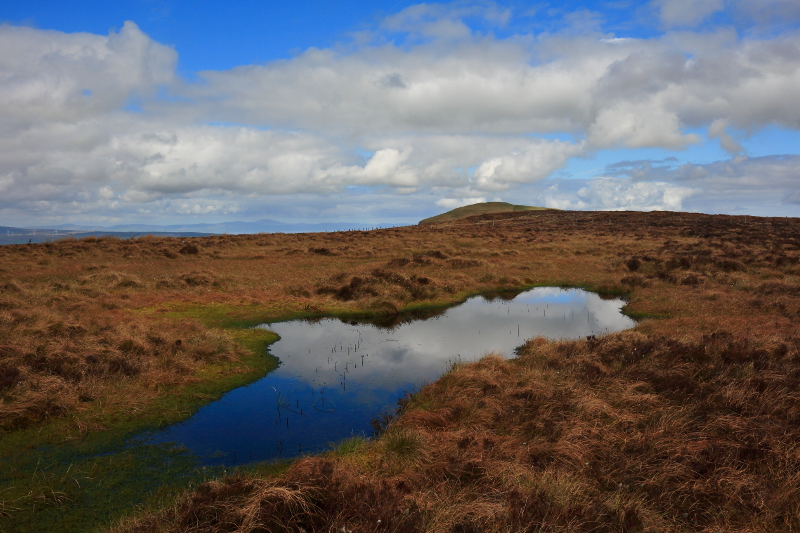 One of several bog pools requiring a diversion.

Boviel seemed malevolent at this stage, trying to discourage visitors, and now that I had been to the top and started to retreat, it was happy to allow the day to brighten up again, and the sun came out.

My car, beckoning where Benbradagh begins to rise from the saddle. 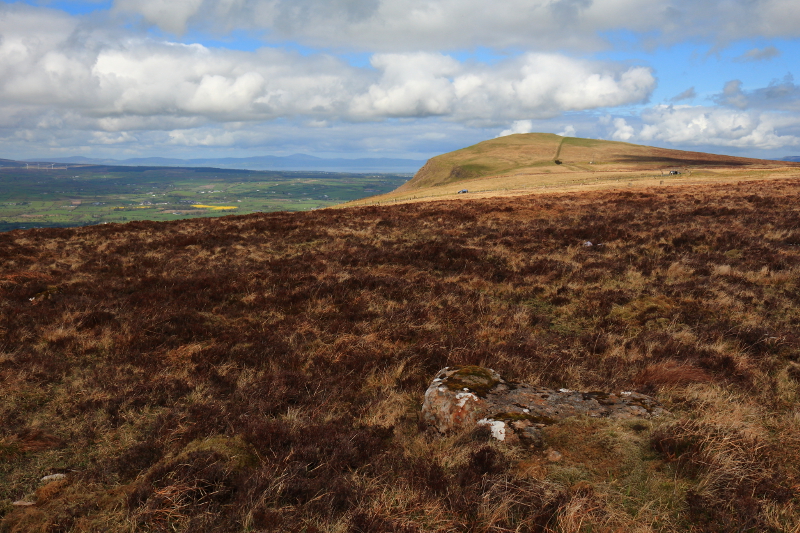 Just before I reached the road and car, Boviel threw up one interesting, if gruesome find – the skull of an unkown carnivore, although probably just a dog. 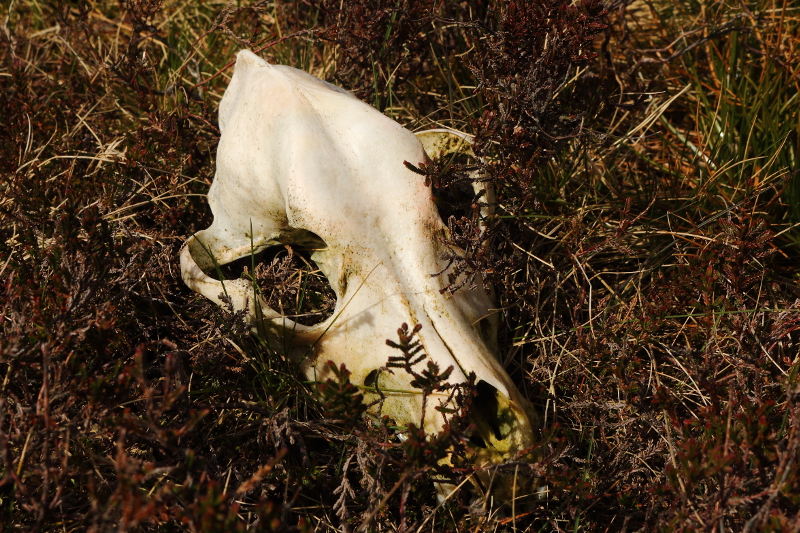 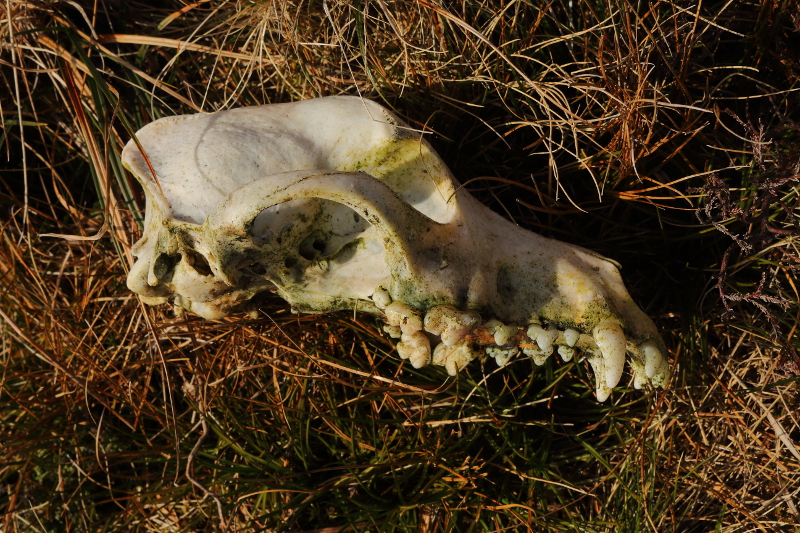 I’m sure if I hadn’t went up Benbradaghs dry, grassy summit first, I wouldn’t have been so ill-disposed to boggy Boviel.  I’ve been on similarly difficult ground before and enjoyed the challenge, but I’d been pampered by Benbradagh today.  As I left towards Dungiven, it was Benbradagh that I looked back fondly on.

The abandonment of Carn Hill meant that I would have time to get a look round the castle and priory in Dungiven too in the next post.