The Mourne Wall at the Hare’s Gap.

I’d been in the Mournes a few times, and whatever mountain I stood on, my eyes were always drawn to Slieve Bearnagh and its sister summit, Slieve Bearnagh North Tor.  Both mountains are crowned by impressive tors – huge masses of bare granite which are stunning to behold.  Both tops were high on my list to walk, and I got my chance in late April.  I started out at Meelmore Lodge north of the peaks, where there is secure parking for a small fee.  From there, I took the farm track heading south to reach the open ground at the foot of Slieve Meelmore.  I skirted this mountain, moving east to join the Trassey Track, a path up to Hare’s Gap pass between Slieve Bearnagh North Tor and Slievenaglogh.

The farm track from Meelmore Lodge, with Slieve Meelmore beyond. 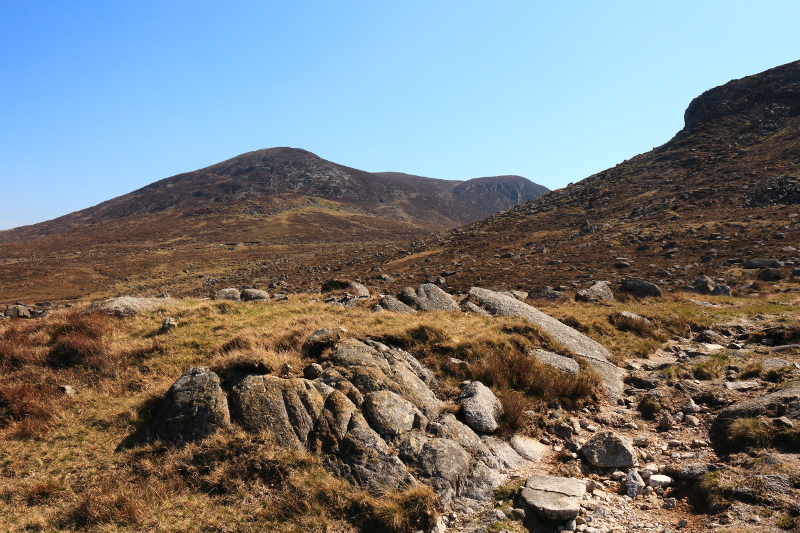 Out on the open hillside, beginning to skirt around Slieve Meelmore.

An old stone shelter in what seemed like an area of abandoned quarrying.

Looking across the lower ground to the north. 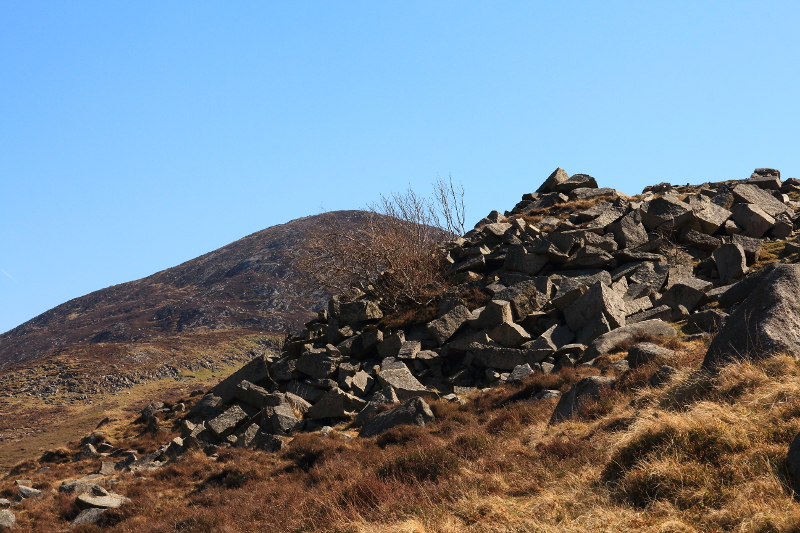 Evidence of an old quarry? 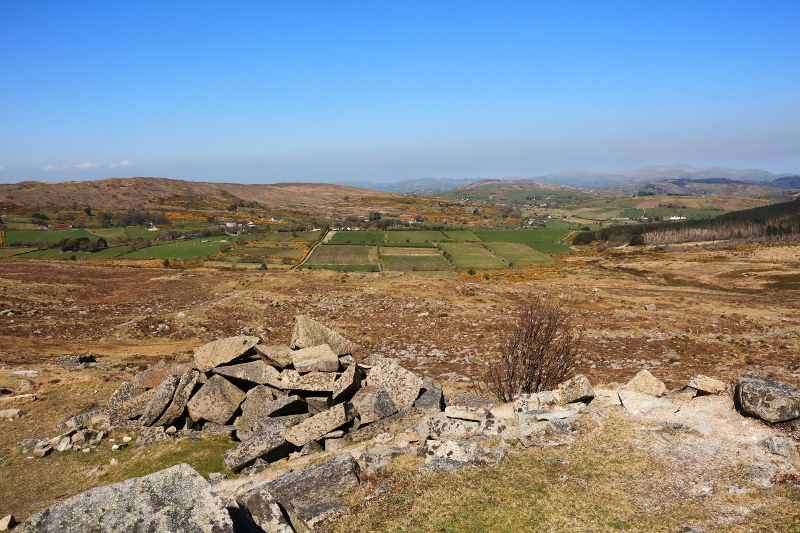 The Hare’s Gap in the centre, with Slieve Bearnagh North Tor rising to the right, and Slievenaglogh on the left.

Slieve Meelmore presented ever changing faces as I moved around it. 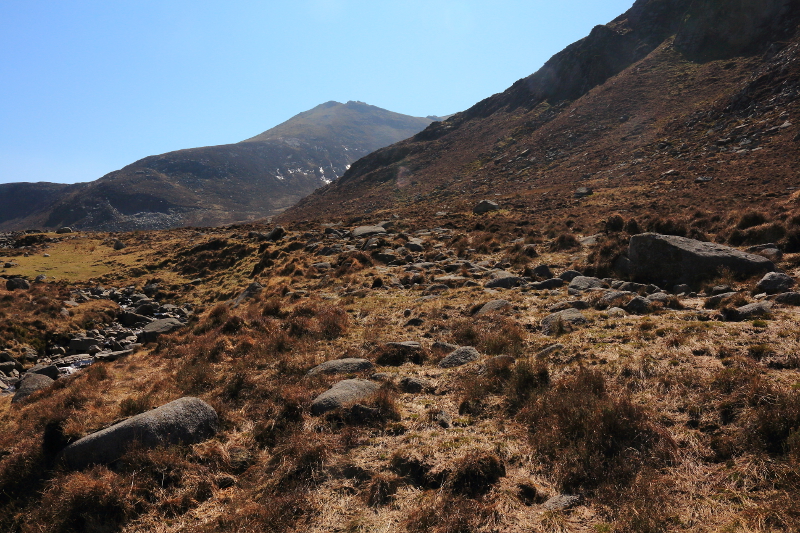 On the Trassey Path now, to the Hare’s Gap. 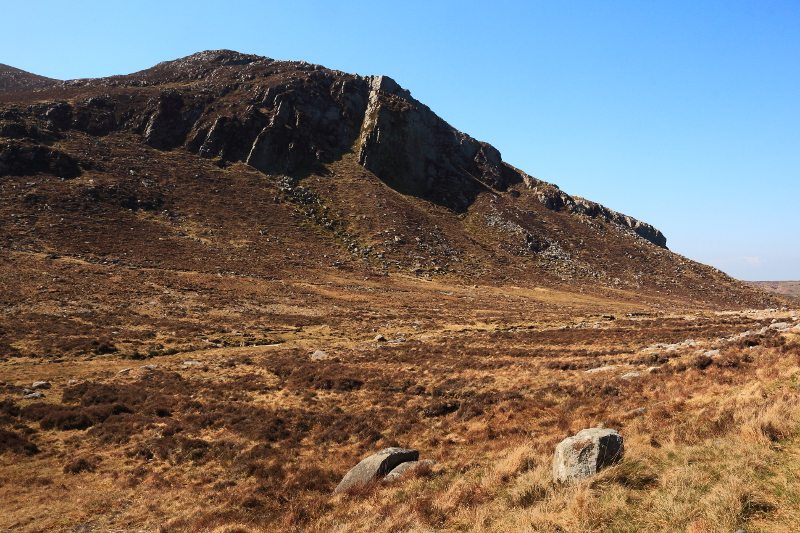 The lower slopes of Slieve Meelmore behind me.

Getting closer to Hare’s Gap.

Looking across to Pollaphuca, the coll between Bearnagh and Slieve Meelmore, similar to Hare’s Gap on the other side.  More about Pollaphuca later. 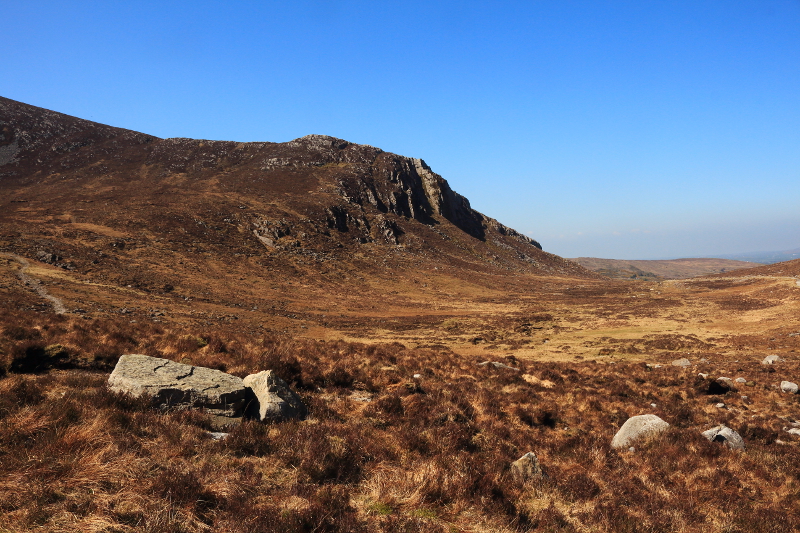 A look backwards along the way I’d walked.  It’s always a bit surprising how much ground has been covered when I look back.

Slievenaglogh on the eastern side of Hare’s Gap.

The Trassey Track which I’d come along.

The Mourne Wall running across the Hare’s Gap.  The wall is 22m/35km long, crossing 15 summits, and in places makes it way up seemingly impossibly steep slopes.  Here, even it was forced to take a brief pause at either side of Hare’s Gap, resuming again at the top of the steep rises. 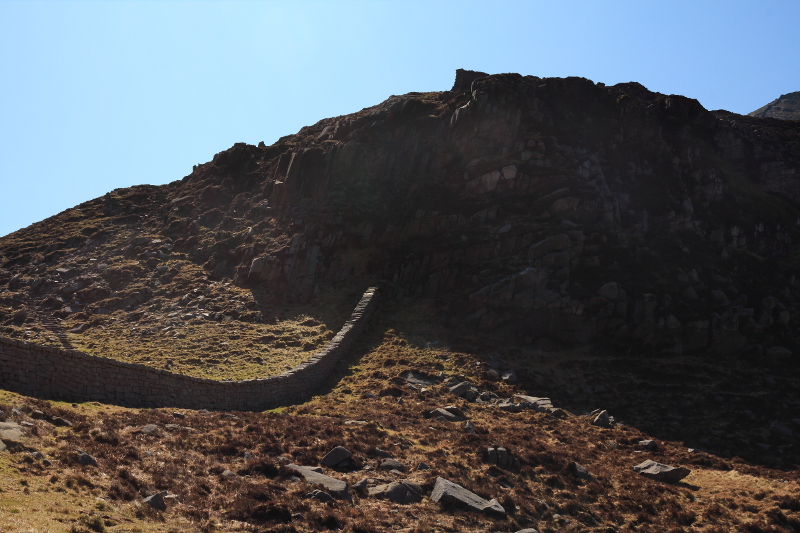 The wall taking another brief break on the Bearnagh side of the gap.

Reaching the Hare’s Gap seemed like a significant point on the walk, and crossing the Mourne Wall, I paused for a rest here, looking up at the steep rise on the western side of the Gap where I would be ascending Slieve Bearnagh North Tor.  There were fine views in all directions, including new views into the heart of the Mournes. 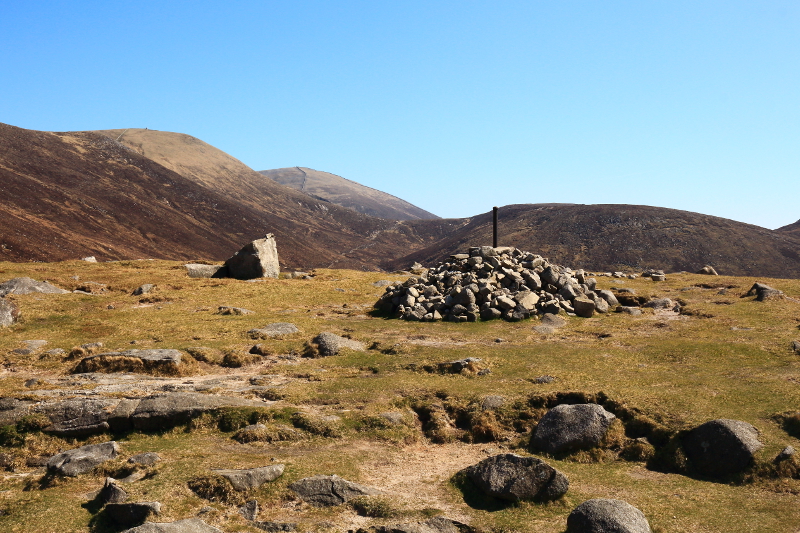 A cairn at the top of the gap, with Slieve Commedagh and Slieve Donard in the background. 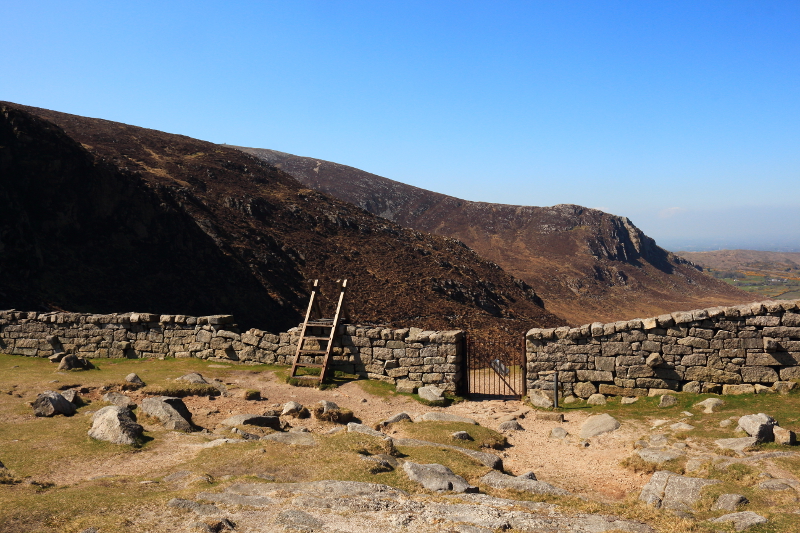 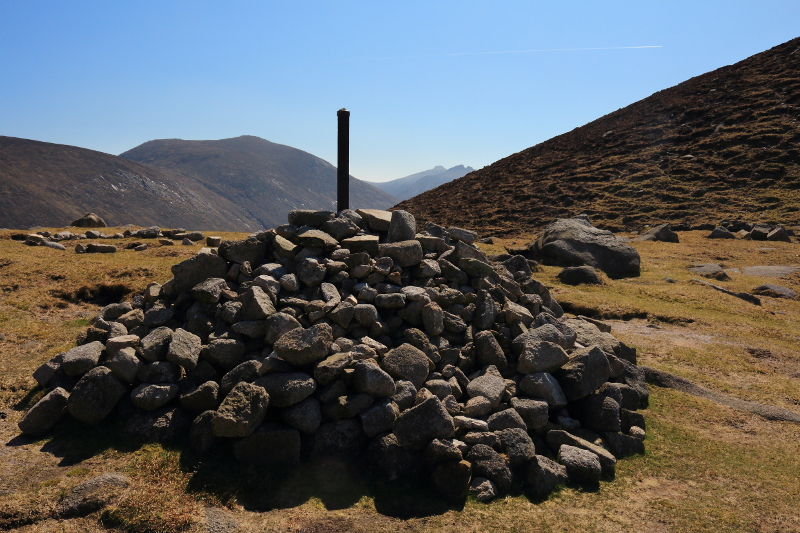 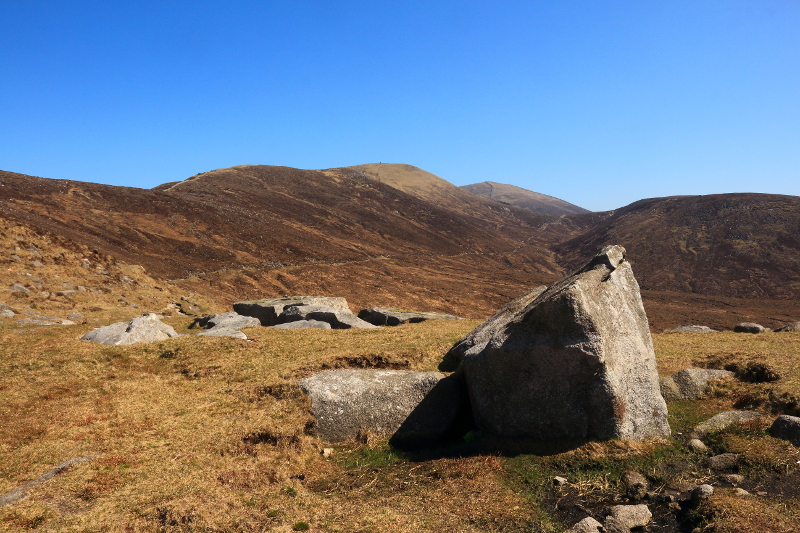 The ground rose steeply to my right now on the way up Slieve Bearnagh North Tor, even the Mourne Wall stopping briefly at a small cliff before resuming at the top.  The summit itself was hidden now behind the steep section and there was a set of stone steps on this part of the ascent, which I began to climb.  It was very steep, and I was very conscious of my backpack, being careful that it didn’t cause me to lose balance and topple backwards!

The wall stopping at the cliff face and resuming at the top.

The resumption of the wall at the top of the cliff. 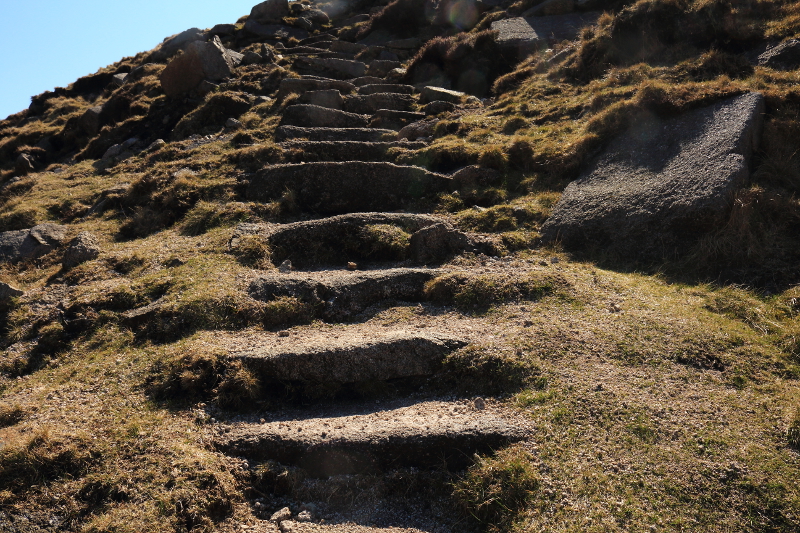 The stone steps on the initial steep climb from Hare’s Gap. 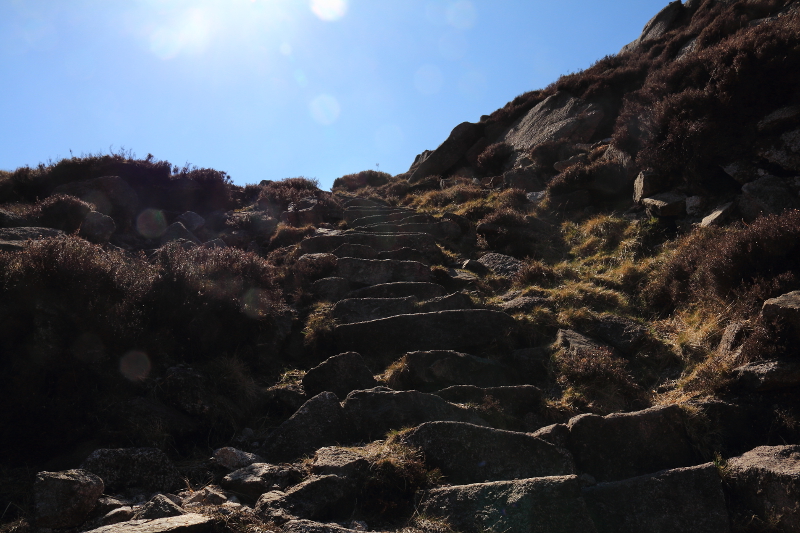 Almost at the top of the steps. 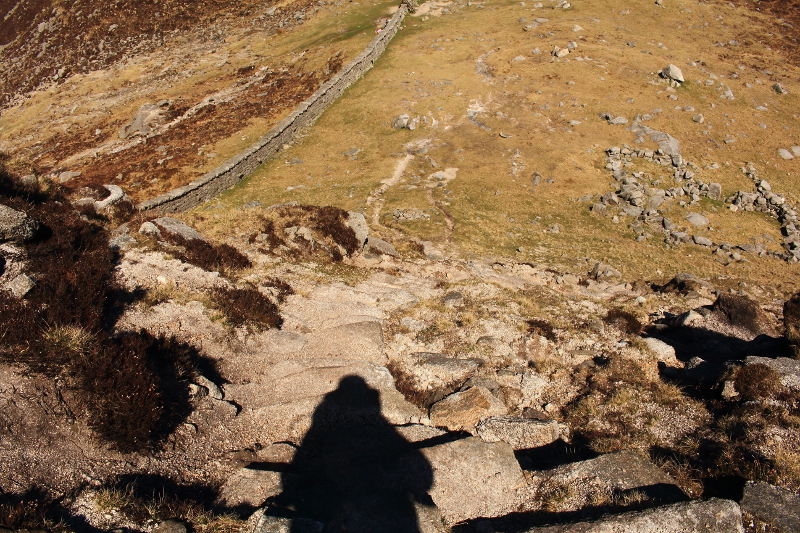 Looking back down the steep steps.

Looking north on the ascent of the steps.  The less rugged farmland where I had started seemed a long way back now.

A more gentle slope having reached the top of the steps. 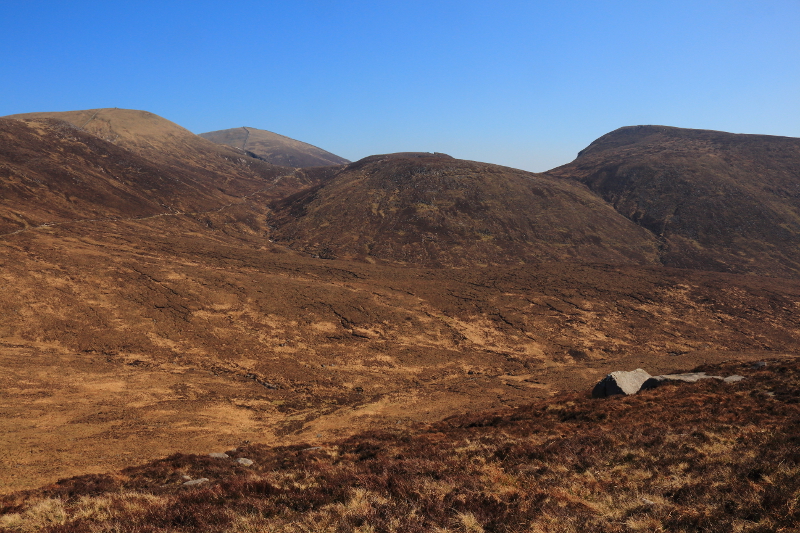 Having climbed the steps, I could now see Slieve Bearnagh North Tor ahead of me, the Mourne Wall leading all the way to the top.  Initially this crossed some ground which was level in parts, and at worst, up some gentle slopes.  I could see however, that it then took a sharp turn upwards to the top, and it would clearly be hard going. 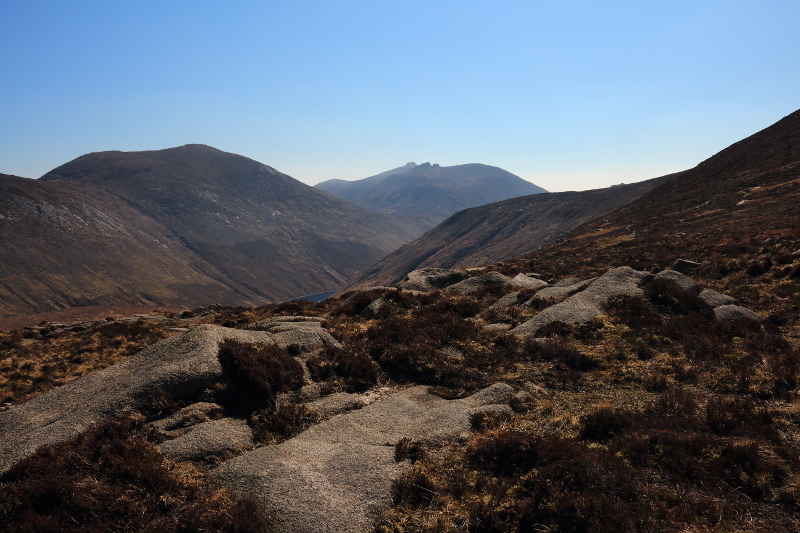 The route taking a sudden steep turn up to the top of Slieve Bearnagh North Tor.

I was grateful for the level section before the steep climb ahead.

Increasingly good views into the middle of the Mournes as I gained height. 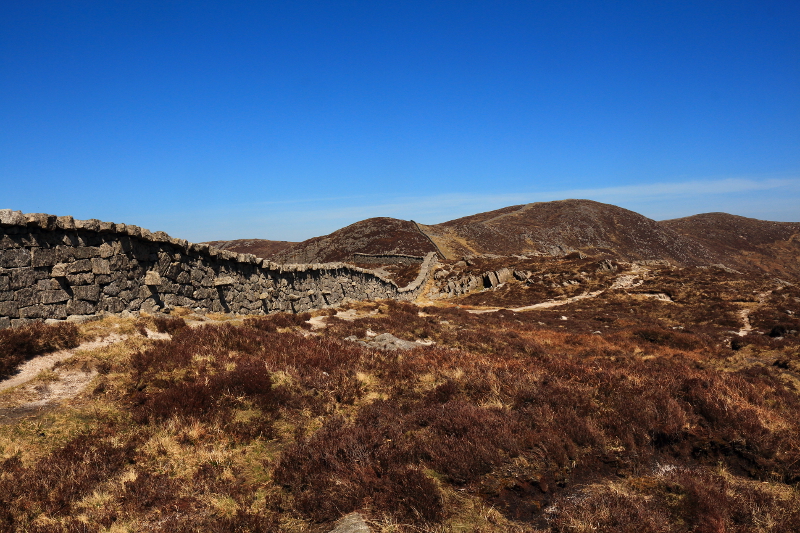 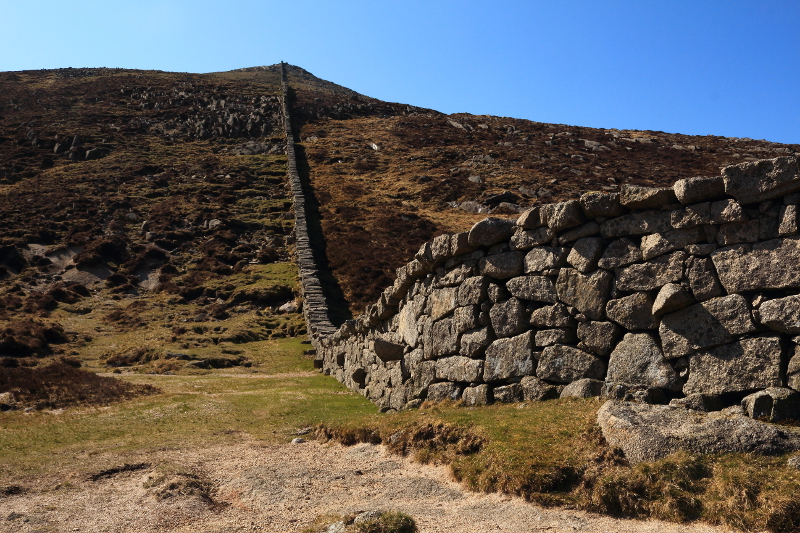 Reaching the end of the level area, there was now one last steep push up to the North Tor.  I found it really hard going, with many pauses to rest, as every 10 metres or so of ascent caused my legs to ache with lactic acid, and my lungs to gasp for air.  At least on the breaks I had some breathtaking scenery to take in.  Looking back down the slope I was climbing, my eye could follow the wall down to Hare’s Gap, up to Slievenaglogh, and along the line of mountains over Slieve Corragh, Slieve Commedagh and Slieve Donard.  I also began to get glimpses of the Ben Crom Reservoir nestled between Slievelamagan and Ben Crom. 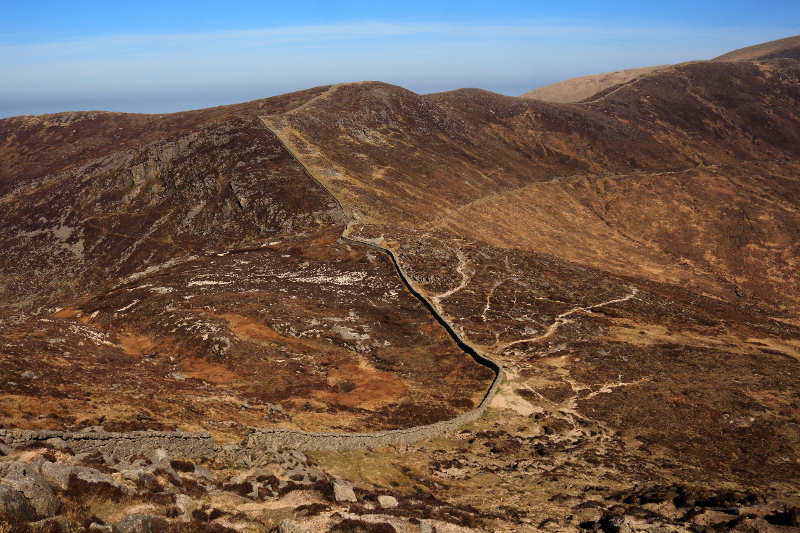 Looking down the slope to Hare’s Gap with Slievenaglogh on the other side.

Looking over the wall in the direction of my starting point. 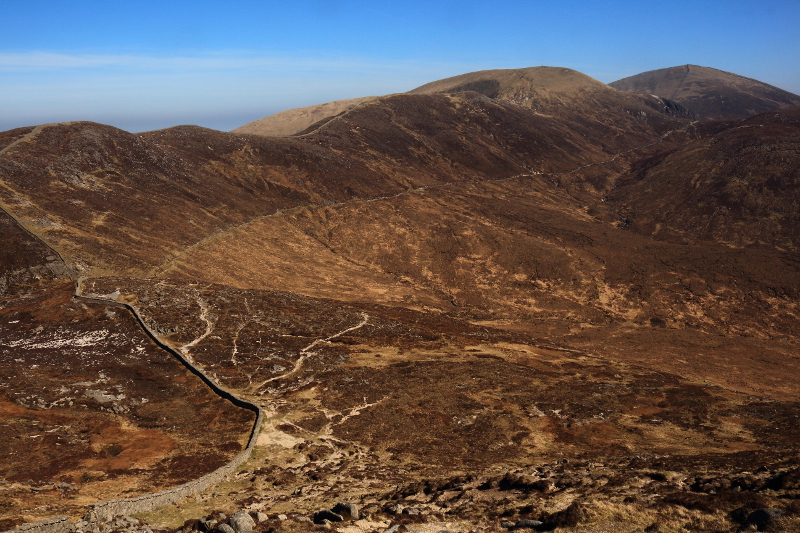 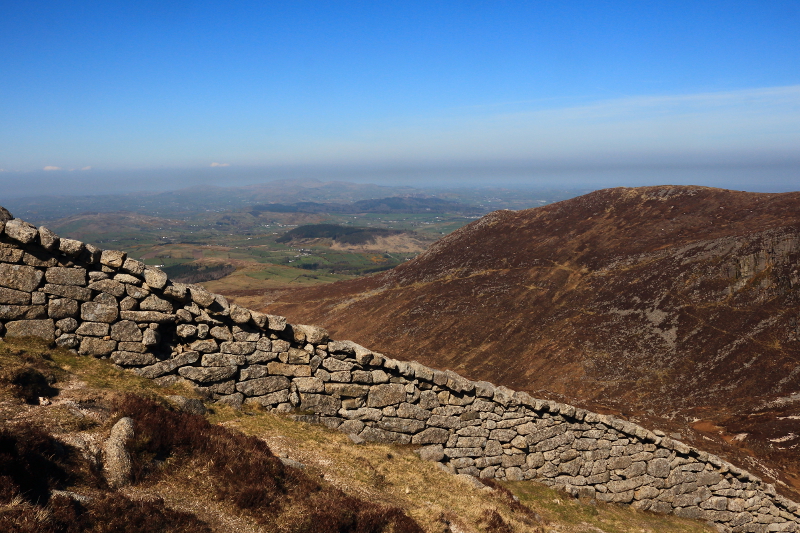 Also getting expansive views to the north now, with the Trassey Track which I had followed, in the lower part of the frame.

On the right, the tor on Slieve Bearnagh appearing over the slope of the North Tor which I was ascending.

Dundrum Bay peeping above the mountains through the haze in the north.

Almost at the summit of the North Tor, with the Tor itself at the top. 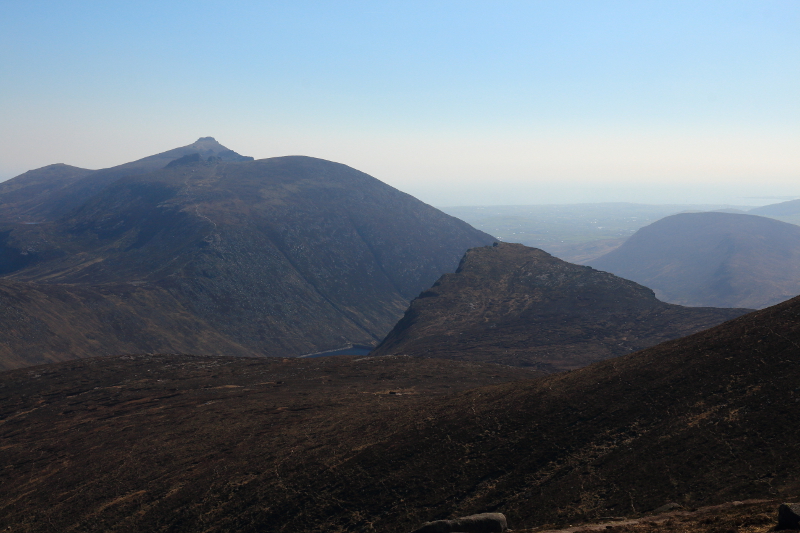 The magnificently shaped Ben Crom on the lower right.

Ben Crom in the centre; not the highest peak in the Mournes, but a fantastic profile.  Carlingford Lough is on the top right of the frame. 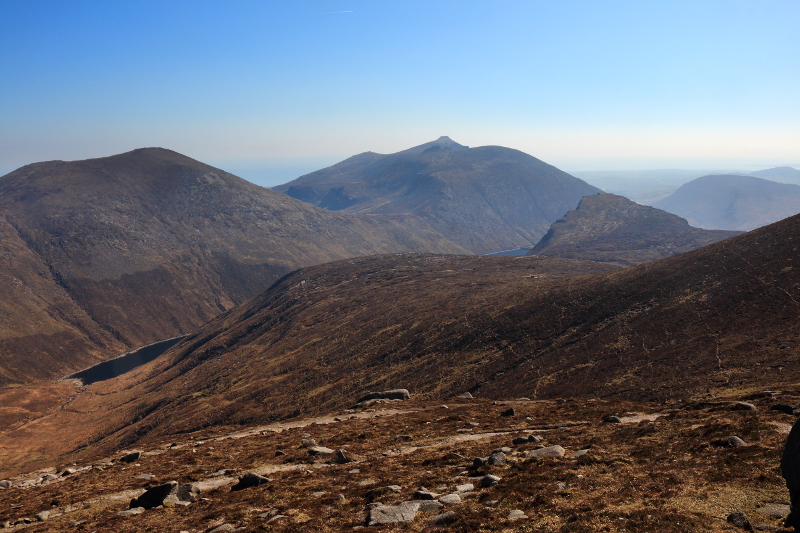 Arriving at the top.

It had been a hard walk up from Hare’s Gap to the top of the North Tor, but arriving at the magnificent tor, it was well worth it.  I would spend a bit of time here catching my breath and appreciating both the tor itself and the wider views, which I’ll show in Part 2.  I will also continue the walk on the short stretch over to Slieve Bearnagh itself.