A rain shower passing over the Owendoo valley, creating a rainbow.

In Part 2 of my walk through the centre of the Bluestacks, I had reached the top of Croaghbarnes, and the next stage would be the summit of Meenanea.  It wasn’t very far, and although there was a bit of descent and ascent, I wouldn’t be losing all the height I’d gained.  There were stormy looking clouds gathering in several directions, lending drama to the surrounding peaks as I dropped down eastwards to the saddle between Croaghbarnes and Meenanea.

Croaghbane I thought, looked particularly dramatic in the changing light. 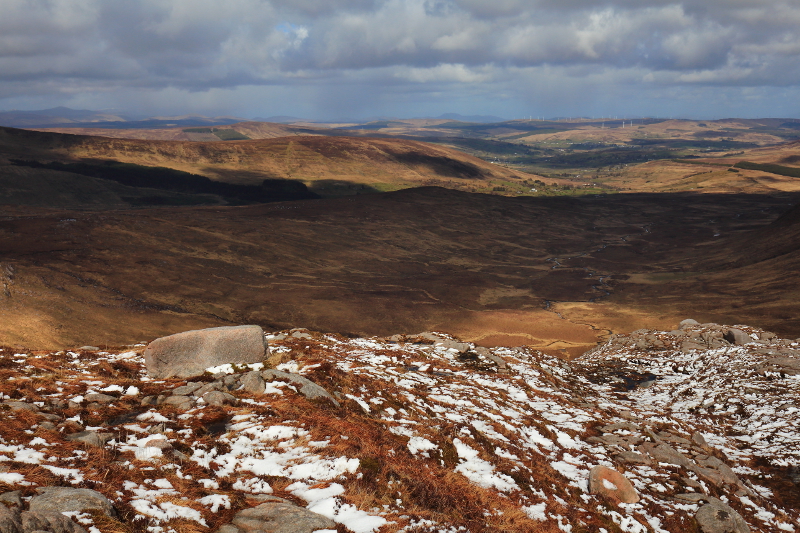 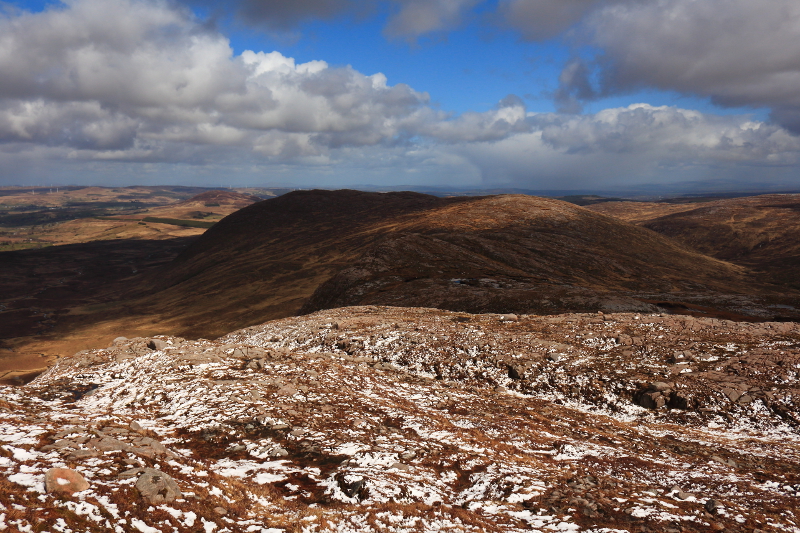 The long raised area I was heading for, with Meenanea forming a high point on the near side, and Cronamuck (in shadow) on the far side. 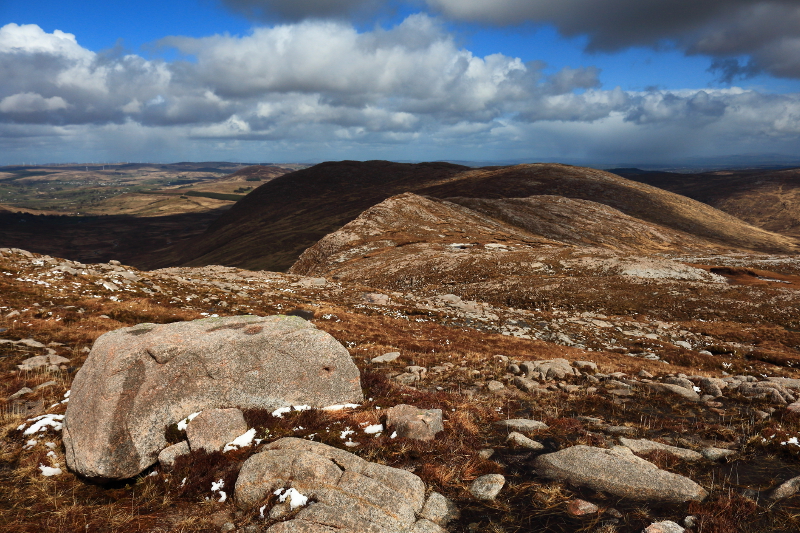 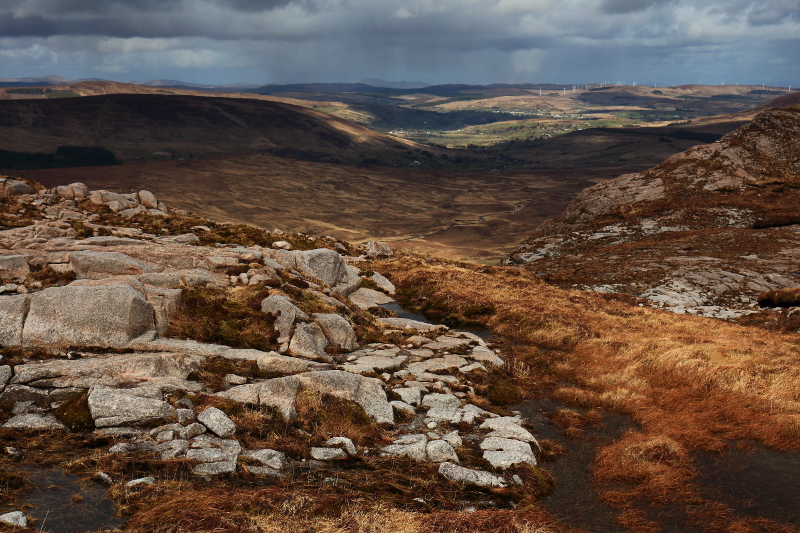 Dropping down this slope, I encountered newts for the second time on the walk, but they were always too quick to disappear into the undergrowth for me to get a photograph.

A buttress coming off Croaghbane/Glascarns Hill catching the sun, with Gaugin Mountain behind. 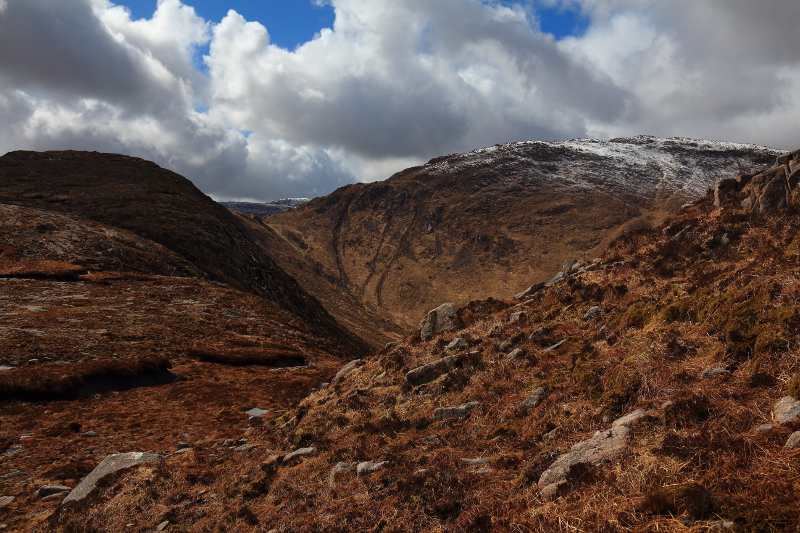 At this point, heavy rain showers began to sweep past, particularly to the north along the Owendoo valley.  It was a beautiful spectacle, watching the veils of rain moving along the valley, forming rainbows as they passed.

The Owendoo River and its little tributaries also made for an eyecatching sight as the channels wound their way through the surrounding bog. 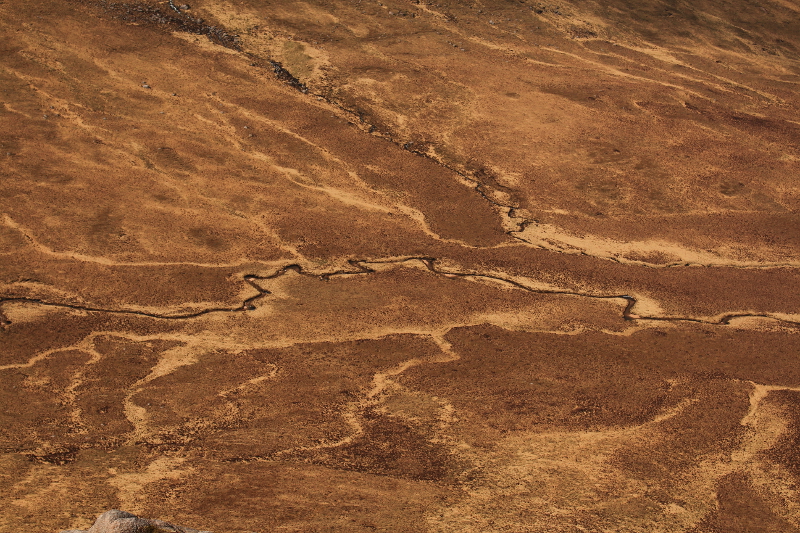 Stormy clouds in the north and west. 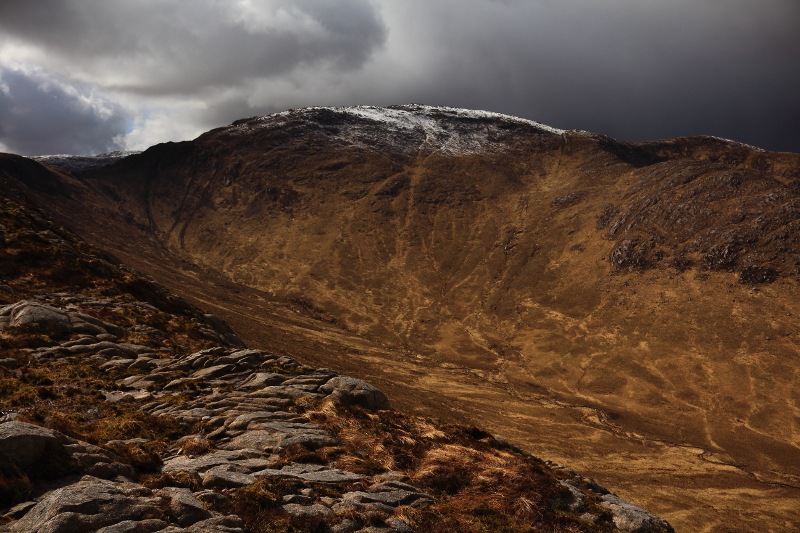 Despite the stormy weather all around, it had somehow stayed dry and sunny where I was, until now, when a heavy hail shower passed overhead.  I hunkered down in the shelter of a peat bank for a few minutes until it passed, and in no time, I was back in sunshine again as rain by-passed me on all sides.

Looking up towards the top of Meenanea. 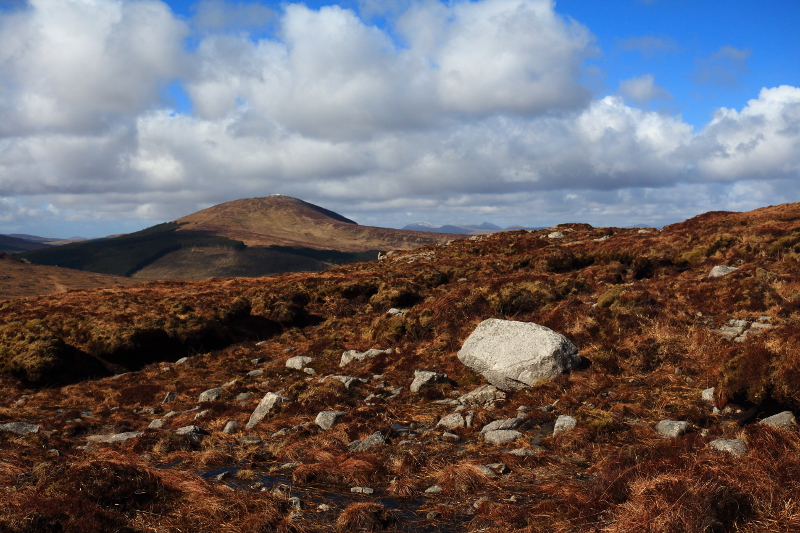 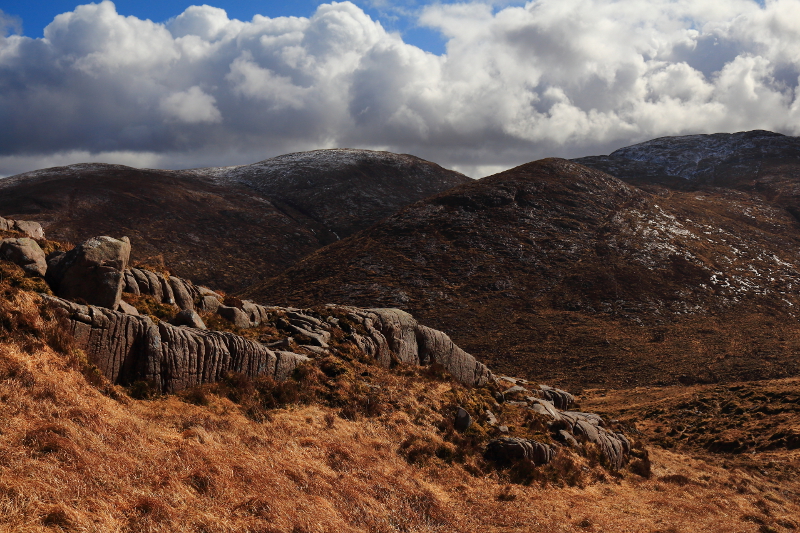 One of the many things I love about the Bluestacks, is the abundance of foreground interest for photography, provided by the fascinating rock shape, texture and colour.

Soon I was on the broad summit area, which was strangely indistinct when actually on it, but a very recognisable, distinctive mountain when seen from below and afar.  I took a good wander around likely looking spots to be sure I had stood on the summit. 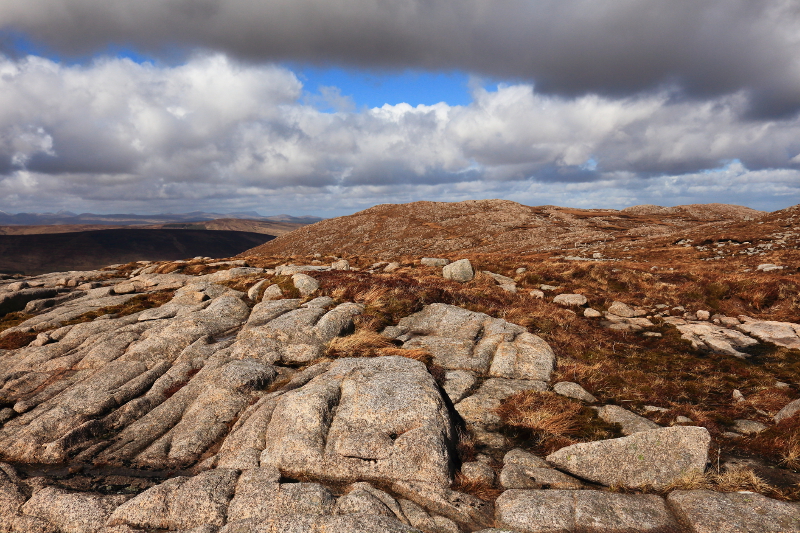 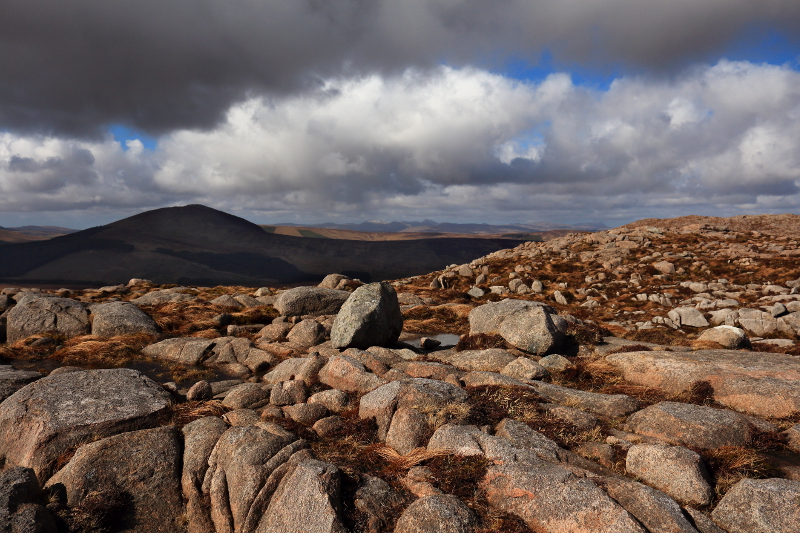 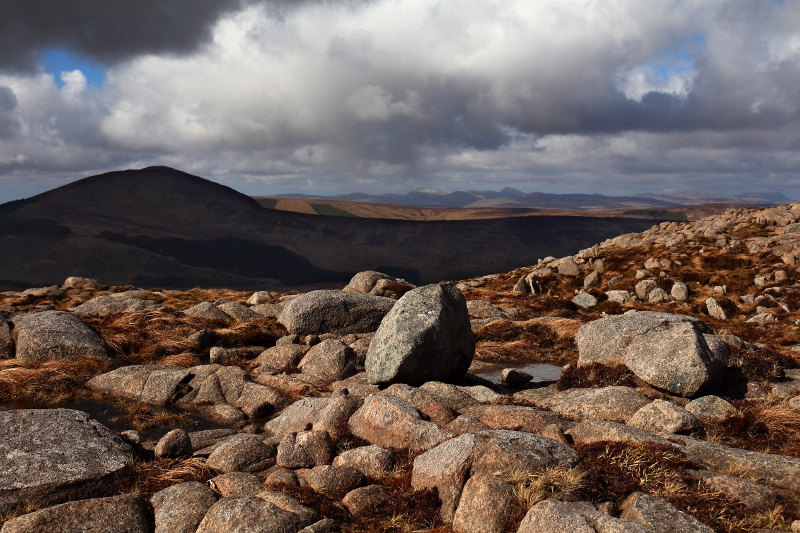 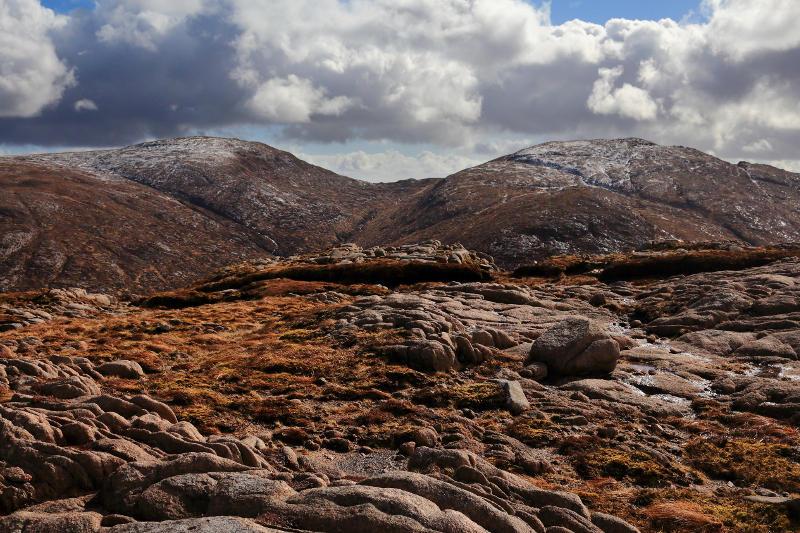 Looking over at my next, and last stop, Cronamuck.

Another mountain bagged, the second of the day, and only one more to go.  Cronamuck was my last stop, and it was a short walk away, with little height loss or gain on the way.  That part of the walk, and return route, in Part 4.

2 thoughts on “3 Peaks In The Bluestacks Part 3: Meenanea”