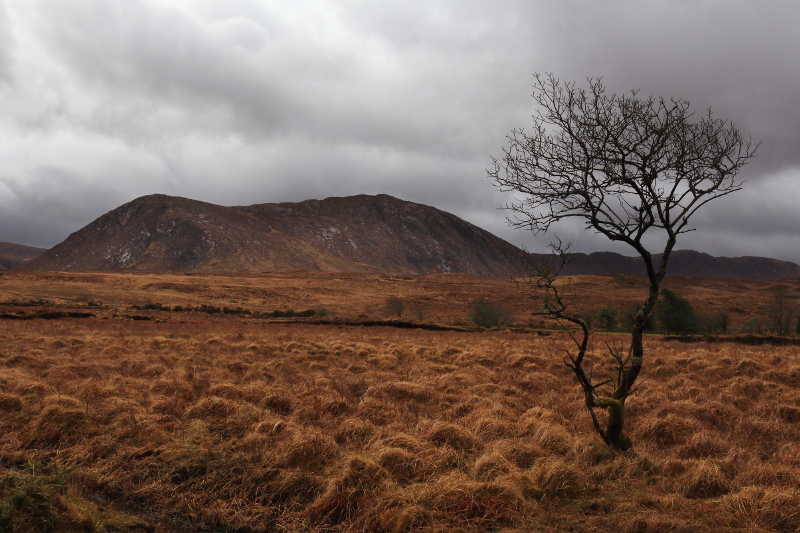 The expanse of bog which would have to be crossed to reach Cronamuck from the north.

In my last series of posts, I was discussing my efforts to bag all the summits in the Bluestacks Mountains, in that particular case, by getting to Croaghanirwore.  It was one of the more problematic summits, being in the centre of the range with no roads nearby.  Getting to it would almost inevitably mean climbing a couple of other mountains first, the route I took going over Browns Hill and Croaghnageer.  Another series of mountains presenting the same issue is Croanamuck, Meenanea and Croaghbarnes, and I was considering the best route to take.  I had considered taking the same route as the walk mentioned above, continuing on from Croaghanirwore, but having actually been on Croaghanirwore, this looked too long for me.  It would probably be possible if I could get picked up north of Cronamuck, but if I had to return over all these mountains to a starting point in Barnes Gap, it looked impossilbe, for me at any rate.  Looking at the map, it looked like it might be possible to reach Cronamuck from the north instead.  With that in mind, I took the car down a narrow minor road branching off the R253, through the gap between Gaugin Mountain and Altnapaste.  I parked on the grass verge and continued on foot along what was now little more than a lane, until reaching the end, I set off across the bog.

We had been having a long period of wet weather, with that day being no exception, and the bog was a complete quagmire.  If this route was possible, I immediately began to have second thoughts on whether it would be possible in conditions like these.  Maybe at the height of summer.  As I became increasingly wet and muck-covered, things got worse as I noticed what looked like a solid wall of hail advancing over the mountains towards me.  The mountains completely disappeared, as did everything more than a few metres away, and it became incredibly dark as the hail enveloped me.  It was impossible to walk in – all I could do was hunker down and hope it passed.  I was also very conscious that this type of weather was very likely to be accompanied by lightning, and the open bog was the last place you wanted to be!  Eventually, it eased off and I pressed on.

The gods were definitely against me, as now I encountered a little river, swollen by all the recent bad weather into bit of a raging torrent.

The river which stopped me in my tracks.

I walked along it for a few hundred metres in both directions but could find no way across.  I knew when I was beaten and decided to give up, at least for today.  As I returned to the car, the hail started in earnest again, as if to kick me on the arse as I left and warn me not to consider changing my mind!  Back at the car, I decided to have a drive round some of the minor roads in the area, on a sort of scouting mission to see if there were any obvious routes across the bog to Cronamuck from this direction, just to salvage something from the day. 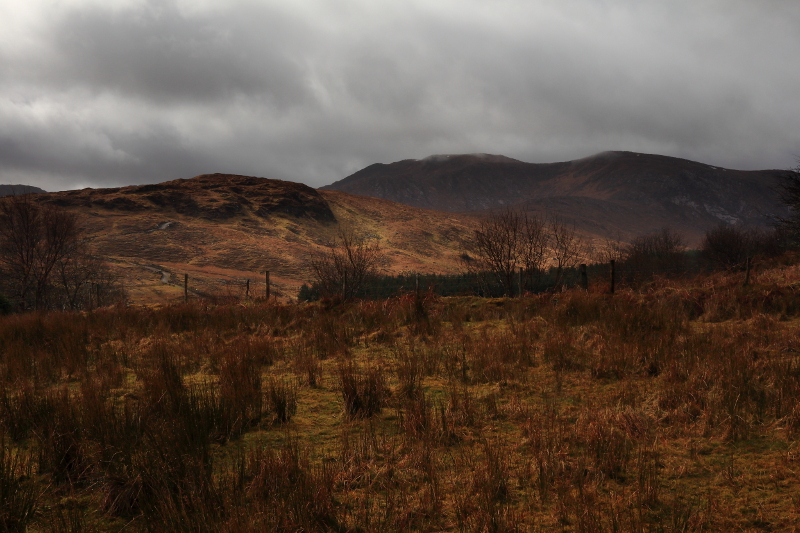 Cronamuck and Meenanea looking moody in the gloom, with a particularly magnificent tree in the foreground.

Now that I had given up for the day, the weather did begin to clear a little, with at least occasional sunshine between heavy showers.

I was also able to see an easy route up Altnapaste, another Bluestack on my list.

The Bluestacks had beaten me on this occasion, not for the first time.

2 thoughts on “Foiled By The Weather Again”