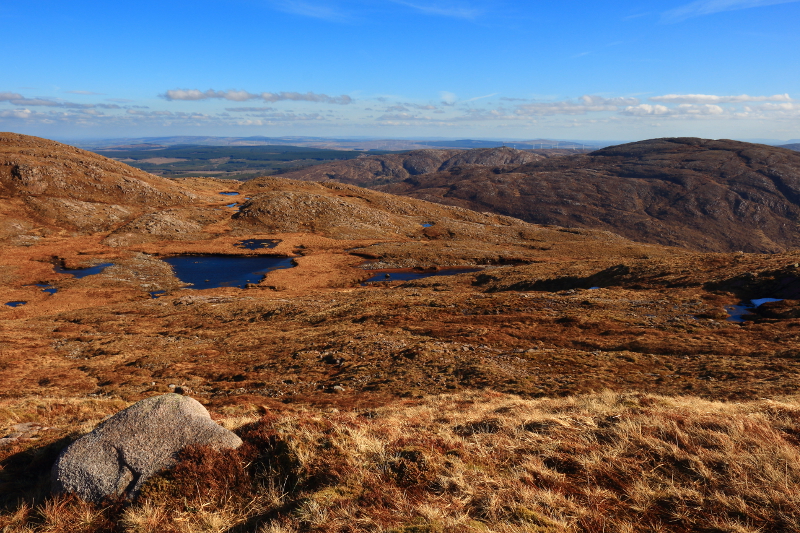 Small loughs in a hollow, flat area of Croaghnageer’s broad summit, with Croaghconnellagh in the background, and a little glimpse of Croaghonagh behind that.

Part 3 of my walk from Barnes Gap, deep into the Bluestacks, over Browns Hill and Croaghnageer to Croaghanirwore, and back out over a similar route.  At the end of Part 2, I was on the return leg, back on Croaghnageer, and in contrast to the grey, overcast conditions on the way in, I now had blue skies and bright sunshine, although it was still bitterly cold.  I had several layers on, with hat and gloves, and a buff over my mouth and nose, to protect me from the cold wind.  On the walk in, I had visited the summit of Croaghnageer, but this spread-out mountain has two prominent subsidiary tops, and on the way out, despite being very close to the summit proper, I skirted round it, instead deciding to take in these two lesser tops.

Near the top of Croaghnageer, giving  a good view back over Croaghanirwore. 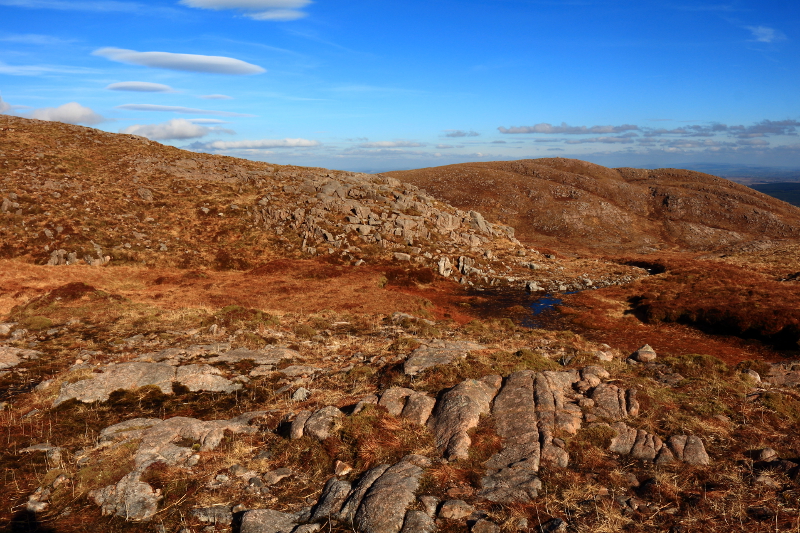 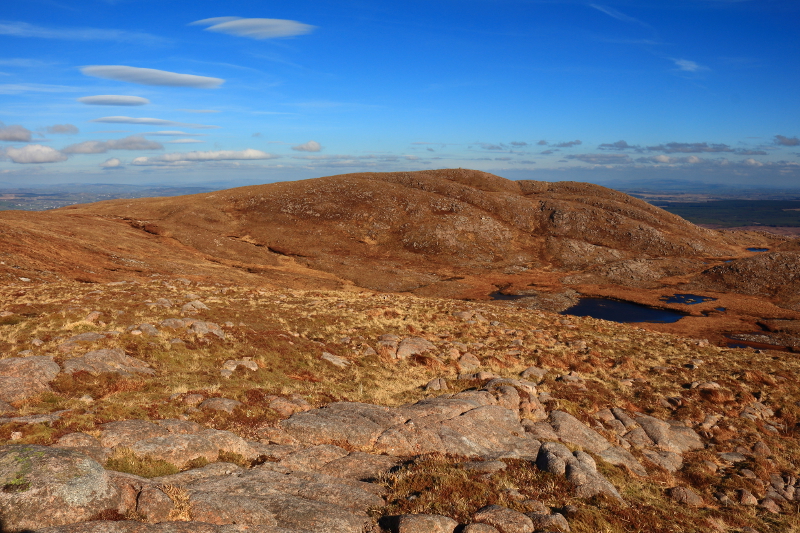 On the slopes of Croaghnageer’s true summit, with one of the minor tops in the background on the far side of the loughs, giving an idea of how extensive the summit area is. 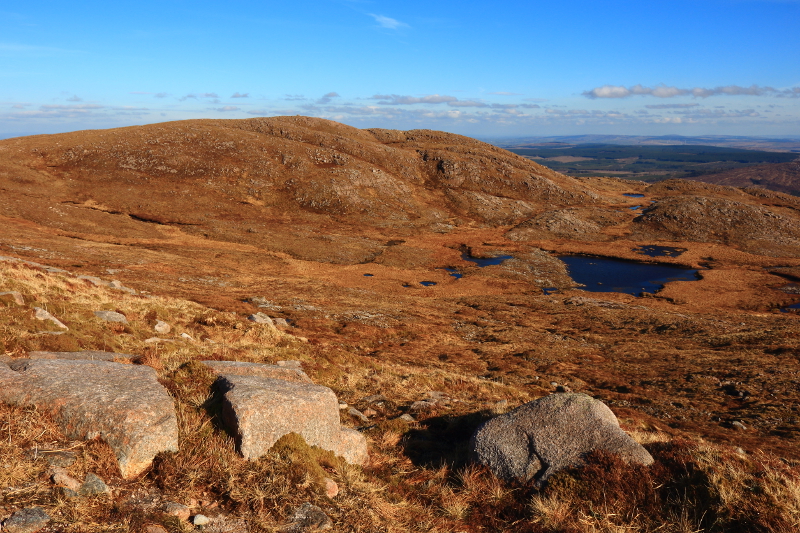 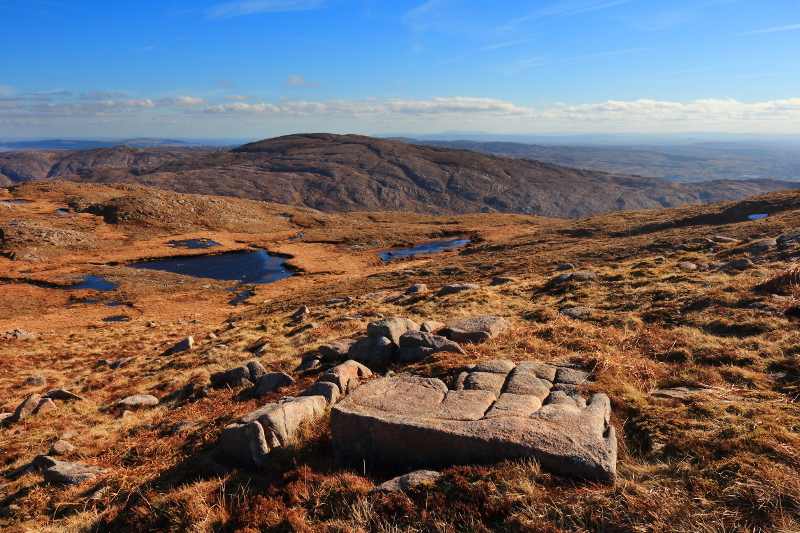 The loughs had a beautiful deep blue colour in the low evening light.

The Derryveagh Mountains on the horizon, including Muckish and Errigal. 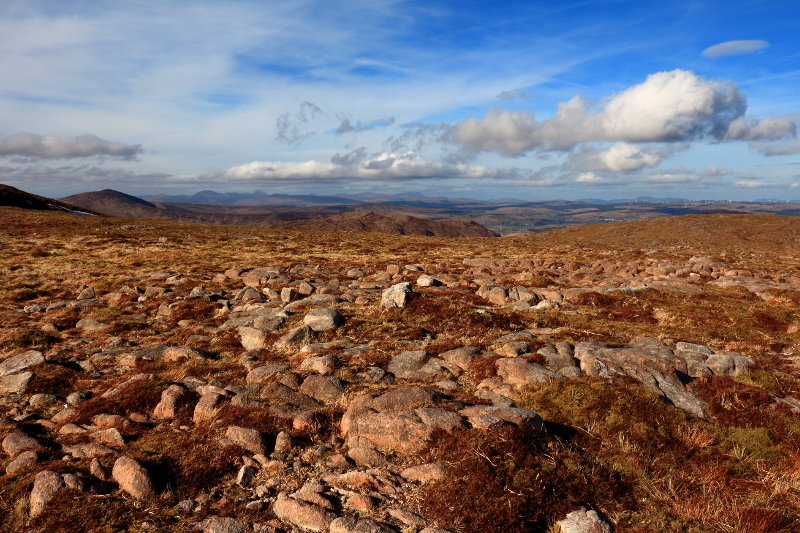 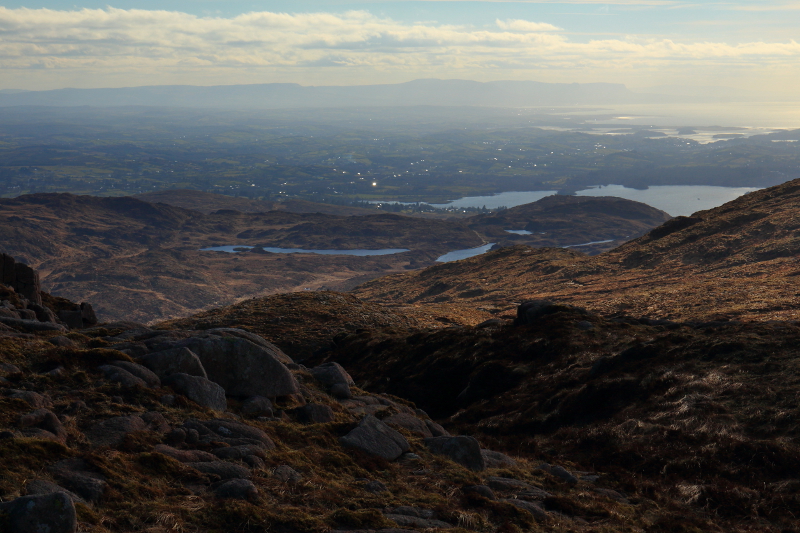 More little loughs on the higher ground, then Lough Eske, then Donegal Bay, backed by the distinctive Benbulbin mountain in Co. Sligo.

A cairn on the southernmost minor summit on Croaghnageer. 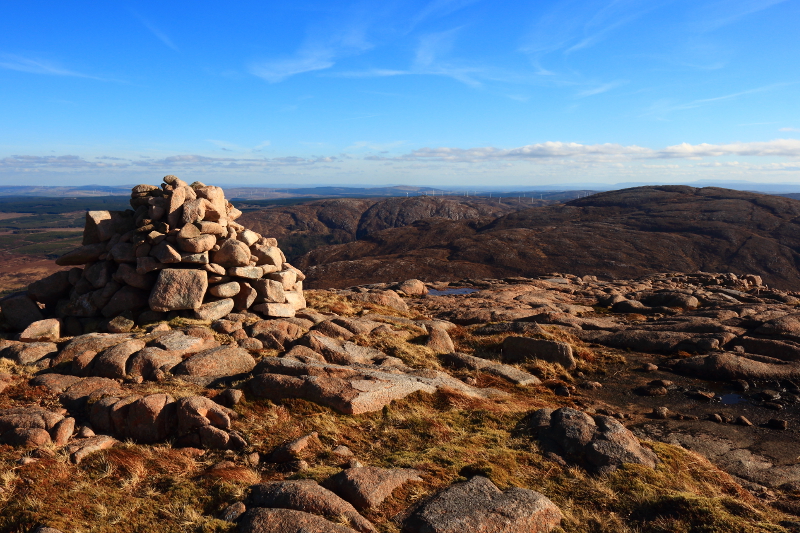 Looking over Barnes Lough and Croaghconnellagh.

Barnes Lough at the foot of Croaghconnellagh.

Having visited the southernmost of Croaghnageer’s minor summits, east of the summit proper, I then made my way to another of the mountain’s minor tops, to the north.  It was only a slight diversion from my route back to my starting point, as I was going in this direction initially anyway on my way to Browns Hill.

The first of the minor tops, which I had just left.

Later, I would be crossing this low lying ground after coming down off Browns Hill, to make my way back to the road in Barnes Gap.

Lough Mourne, with the town of Ballybofey beyond, and a hint of the Sperrin Mountains in the distance.  Amazingly, on this walk, I been able to see parts of Donegal ranging from Ballybofey in the Southeast, to Donegal Town in the Southwest, to the Derryveagh Mountains and Inishowen mountains in the north of the county.  Mountains in Tyrone/Derry, Leitrim/Sligo, Fermanagh/Cavan and even north Mayo had also been visible. 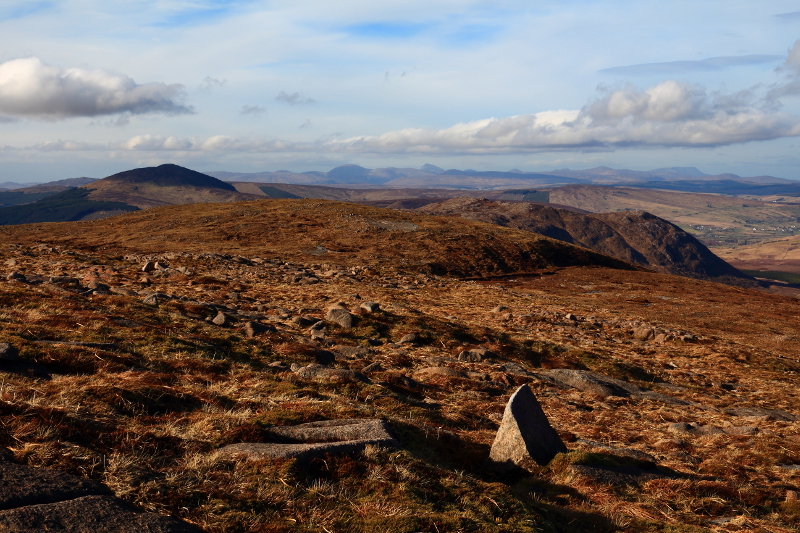 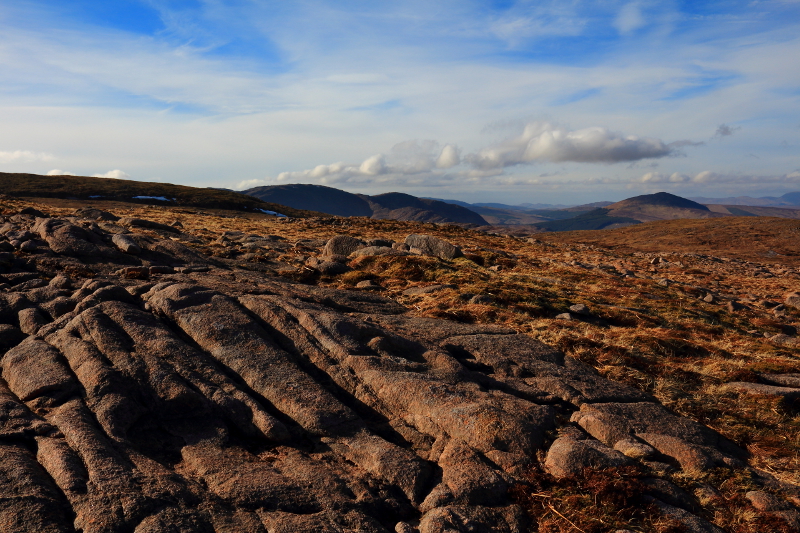 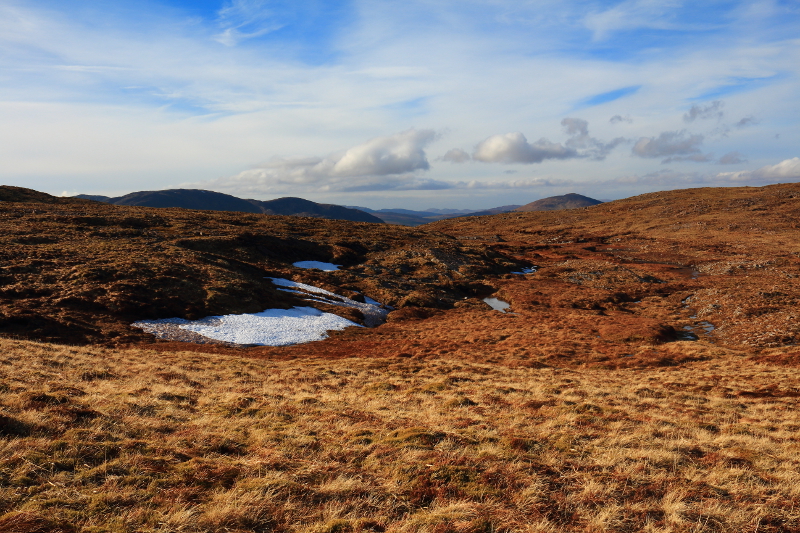 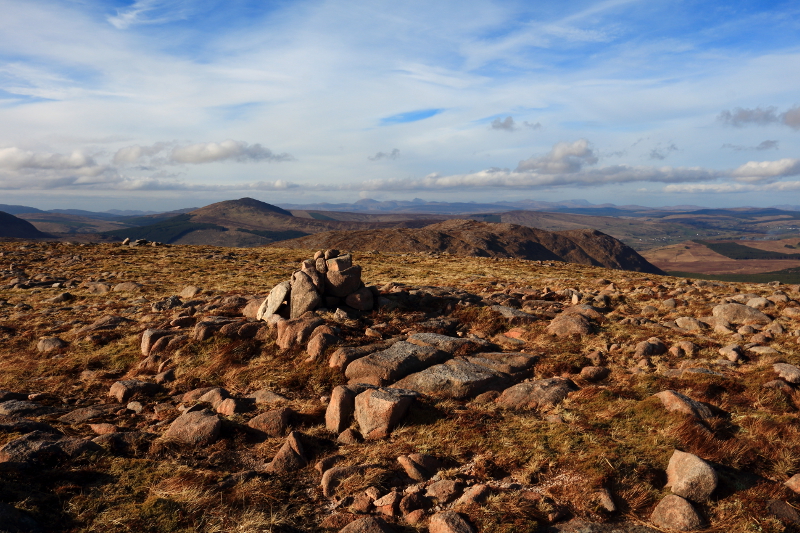 A little cairn marking the northern minor top on Croaghnageer, with Meenanea and Cronamuck just peering up behind, Gaugin Mountain with forested lower slopes behind that, and the Derryveagh Mountains in the distance. 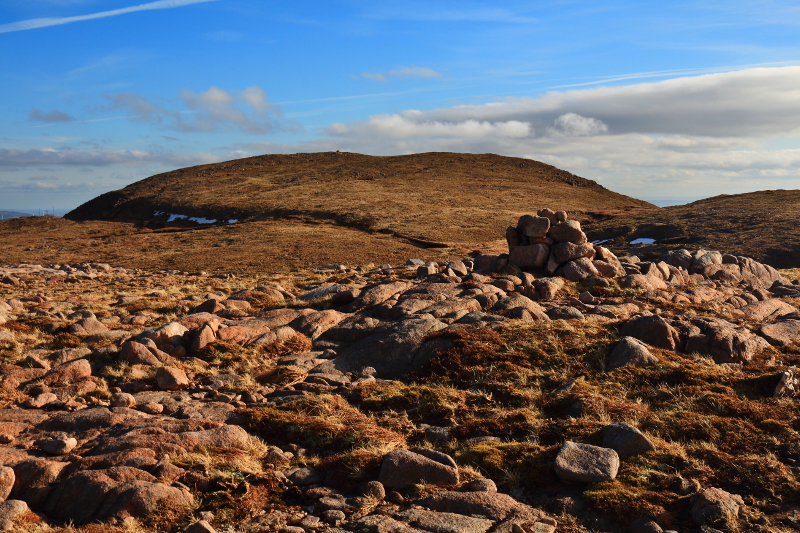 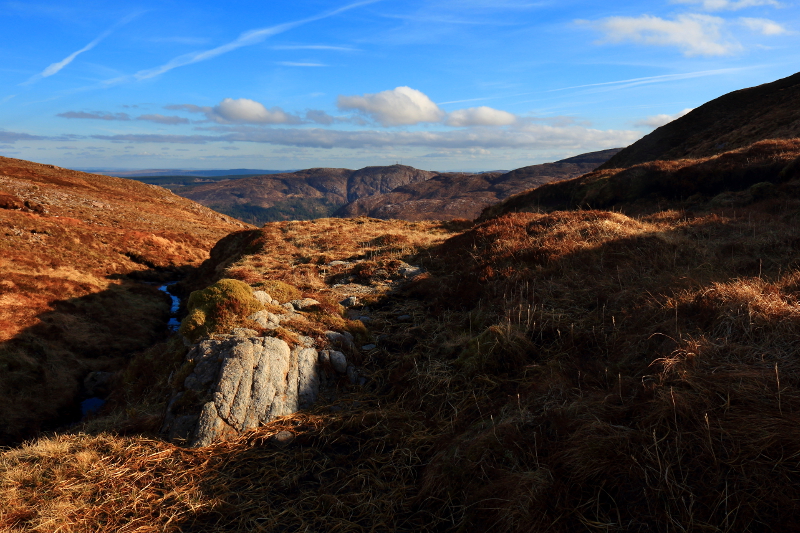 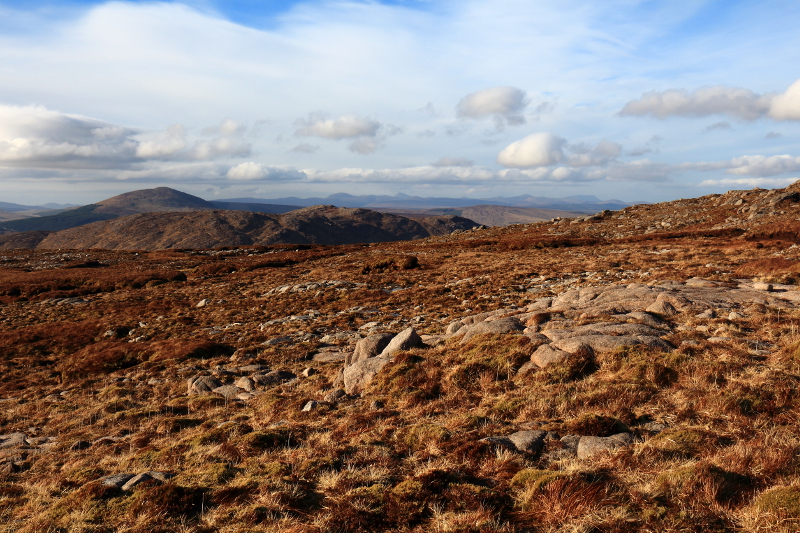 A final view from Browns Hill on the way back down to lower ground, looking over Lough Mourne.

This was a hugely enjoyable walk, with a feeling of real remoteness and wildnerness, and magnificent views over Donegal.  It was very satisfying to reach my longstanding target of Croaghanirwore, and I’d been well rewarded for persevering despite initially poor weather, by a beautiful evening.  As usual after these longer walks, I arrived back at the car weary but deeply content.

4 thoughts on “Deep In The Bluestacks Part 3”