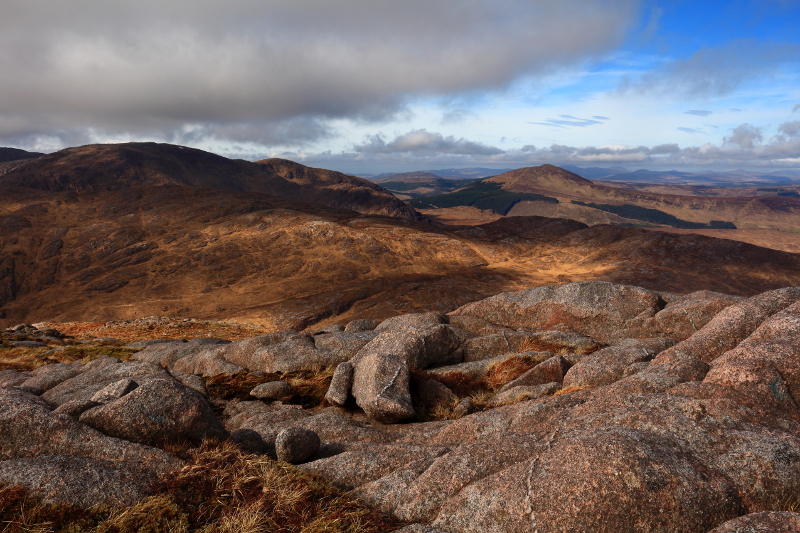 At the summit cairn on Croaghanirwore, looking over to Lough Belshade.

I put the above 2 photos at the start of the post to show that I eventually did get some decent light on this walk deep into the Bluestack Mountains.  I started off in gloomy, overcast conditions, with regular outbreaks of rain, but I wasn’t going to let the weather put me off.  My goal was Croaghanirwore, and I’d tried to reach it a few times before but had been beaten back by snow and hail storms, and deep snow that was exhausting to wade through.  I was determined that a bit of rain wouldn’t put me off.  Croaghanirwore is in the central part of the Bluestacks, in a remote area with no roads, making it difficult to reach without crossing other peaks first.  It would require a fairly long, difficult hike over Browns Hill and Croaghnageer, over rough, boggy terrain, and back out over the same ground.  But, I’ve done so many of the Bluestacks now, that I’d ultimately like to walk them all, so Croaghanirwore would have to be done!  I parked the car in Barnes Gap, and set off along the track to Browns Hill, before striking off across the bog to its base.

On the way up Browns HIll, looking through the gloom to Croaghconnellagh.

The Bluestacks are bleakly beautiful in this kind of weather.

As I reached the top of Browns Hill there were reasons to be optimistic about the weather as some breaks began to emerge in the clouds, and parts of the mountains would be picked out by shafts of sunlight.  It was possible the predicted improvement wouldn’t materialise however, as it is difficult to forecast in mountainous areas like this, and at this stage, the breaks were still short-lived,  with the clouds always closing back over. 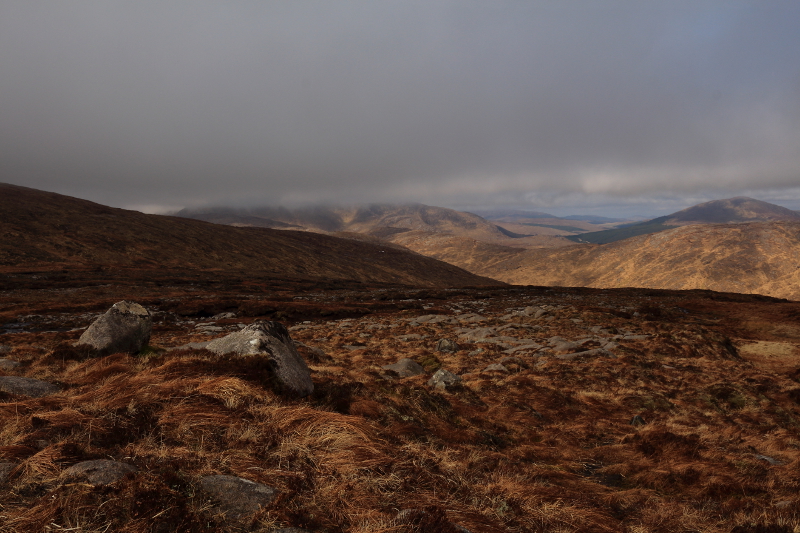 A short break in the clouds lets a little light on to the landscape.

I didn’t tarry on Browns Hill, having been on it many times by now, instead hurrying on across the flat raised valley, dotted with little peat hags, between it and a subisidiary eastern summit of Croaghnageer.

Croaghnageer is broad, spread out mountain with two prominent subsidiary summits in addition to the main summit.  I’ve visited them all in the past, so I skirted round the lesser summit southwest of Browns Hill’s top, making for Croaghnageer’s main top. 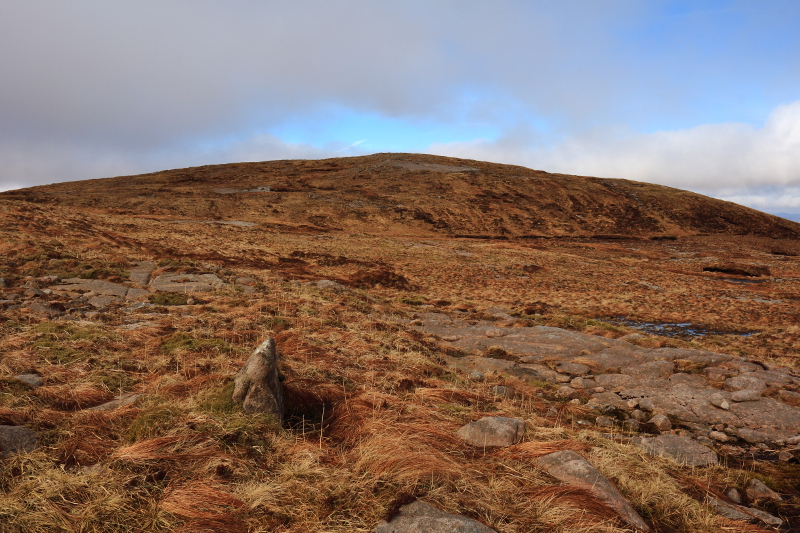 Crossing between one of Croaghnageer’s minor tops to the main summit on the right, with views down to Lough Eske, and Donegal Bay in the hazy distance.

The Bluestacks have quite a complicated, confusing topography, and when I started walking them, I had been fooled by the minor top east of Croaghnageer’s main top, into thinking that I was at the top, and that the actual summit to the west was Croaghanirwore!  It was only when I continued over to this summit that I realised Croaghanirwore was futher on, and would have to wait for another day, and only now had I reached the top of Croaghnageer.  Croaghanirwore really has been very elusive for me!  Hence my determination to reach it this time.

A little valley between a minor and main summit of Croaghnageer. 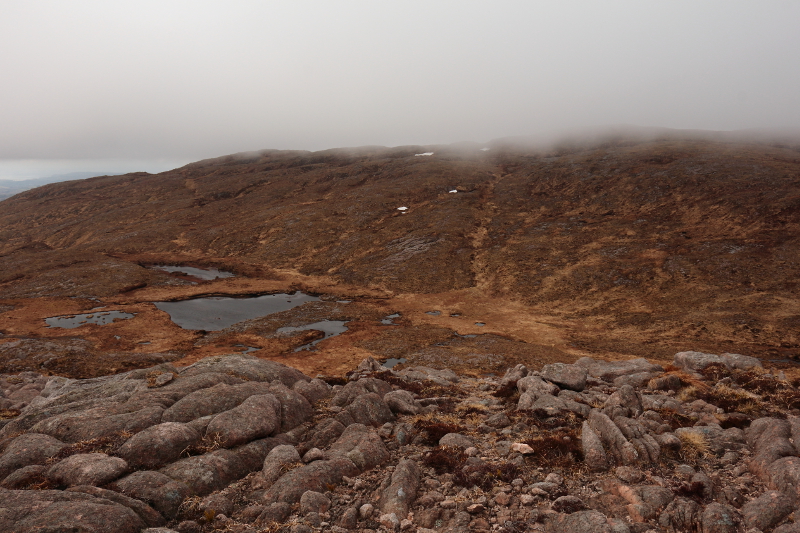 The main summit of Croaghnageer, topped by clouds.

I was struck by the red colour of this rock in the foreground.

Starting to ascend the summit proper of Croaghnageer.

By now, I’ve had a bit of experience navigating in mountains, and know the Bluestacks fairly well too, so there was no confusion, and soon I was at the summit of Croaghnageer – my second peak after Browns Hill. 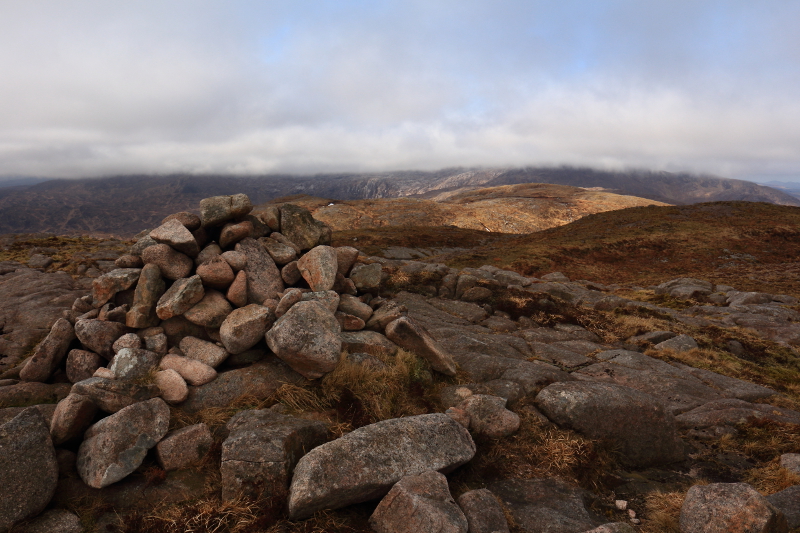 The cairn on top of Croaghnageer.

A little lough near the summit, with Gaugin Mountain in the background. 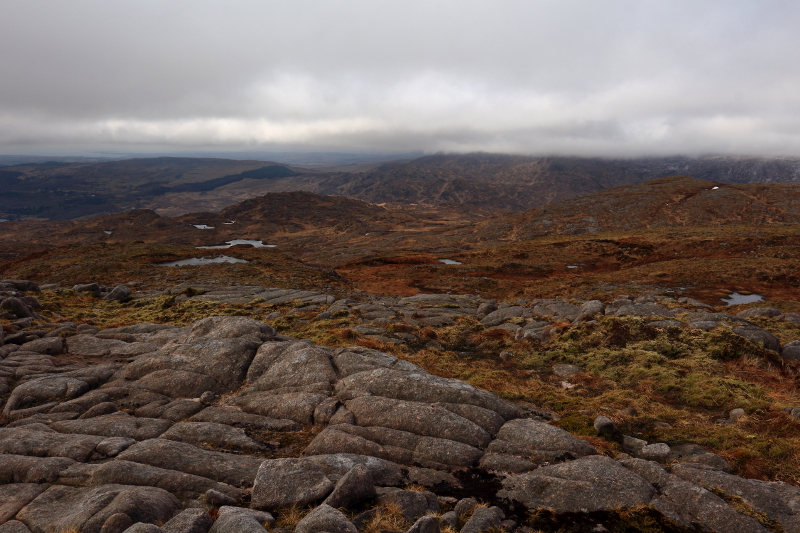 Croaghanirwore, momentarily out of the cloud and lit by sunshine, with the higher Bluestacks ridge behind, still covered in cloud. 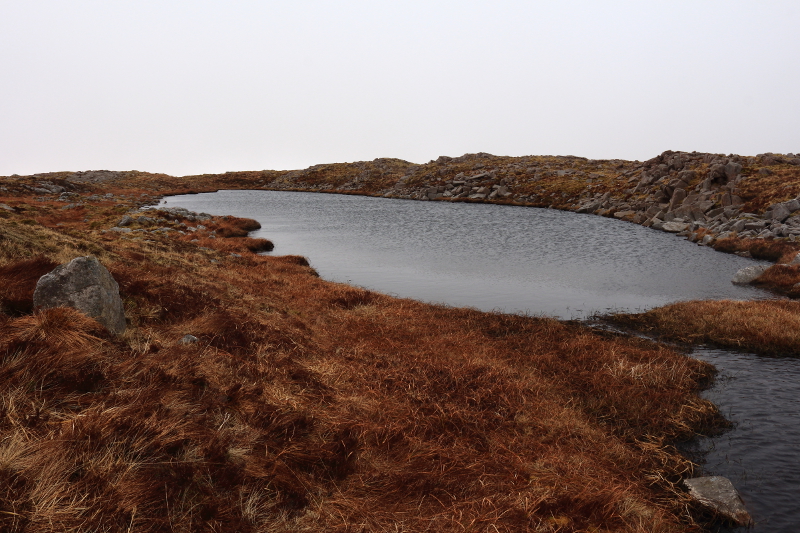 The lough north of the summit which I took a minor diversion to.

At the top of Croaghnageer, there were increasing breaks in the cloud cover, with a bit of sunshine in the east and south, although it was still grey over the coast in the west, and over my next goal, Croaghanirwore to the northwest.  I could now see most of its bulk however, across another raised valley, its top still shrouded in cloud.  It was a short but steep drop down from Croaghnageer into this valley, followed by a walk around another little lough to the long rising slope up to the top of Croaghanirwore. 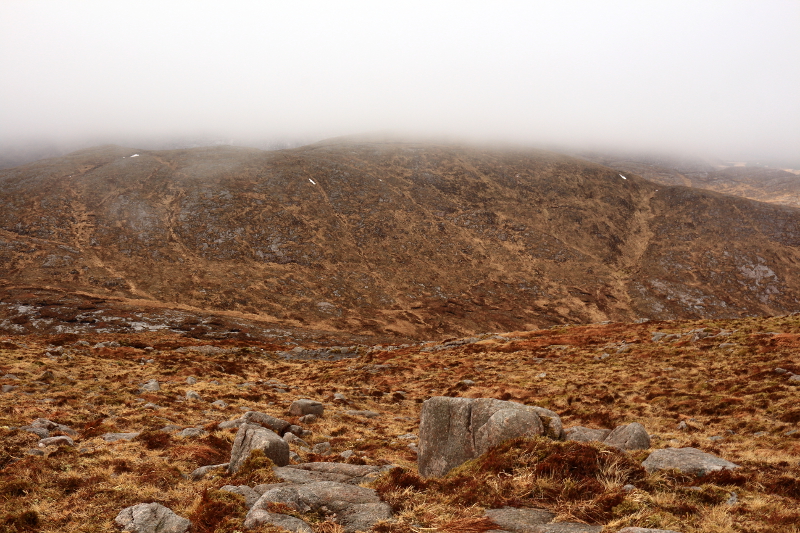 Another little lough in the high valley between Croaghnageer and Croaghanirwore.

Looking up the slopes of Croaghanirwore. 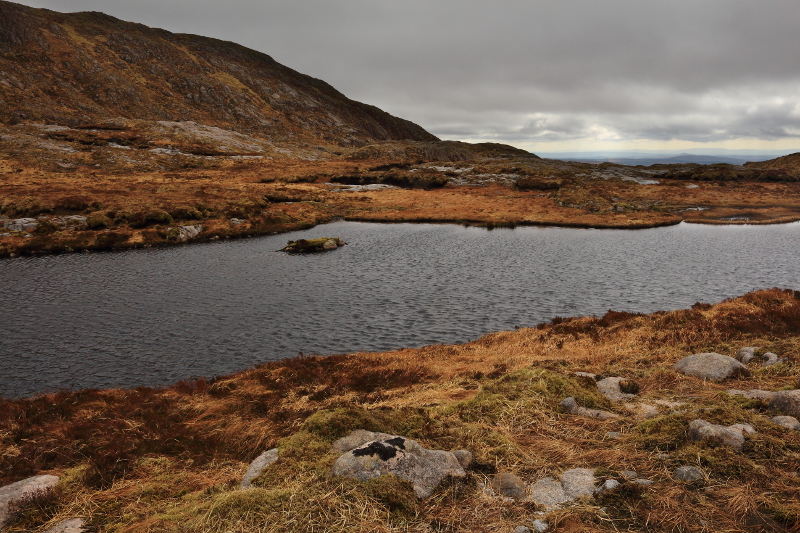 A look across the lough and valley back to the steep western side of Croaghnageer which I had just come down. 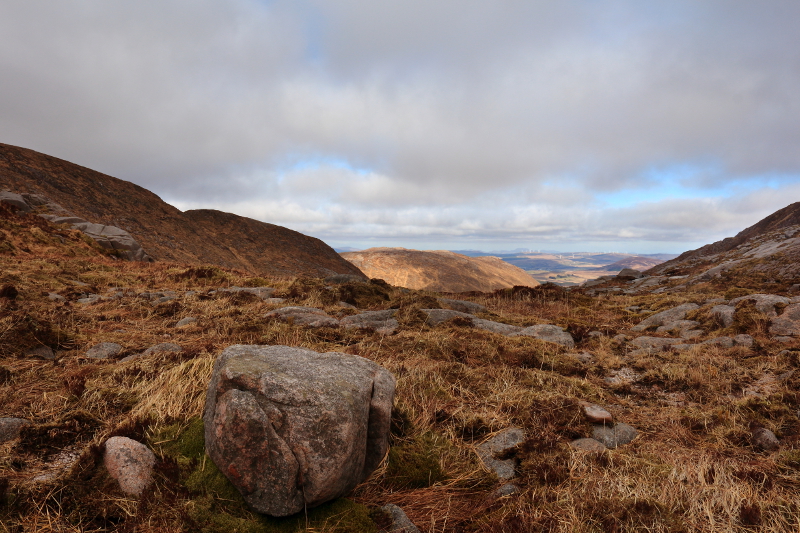 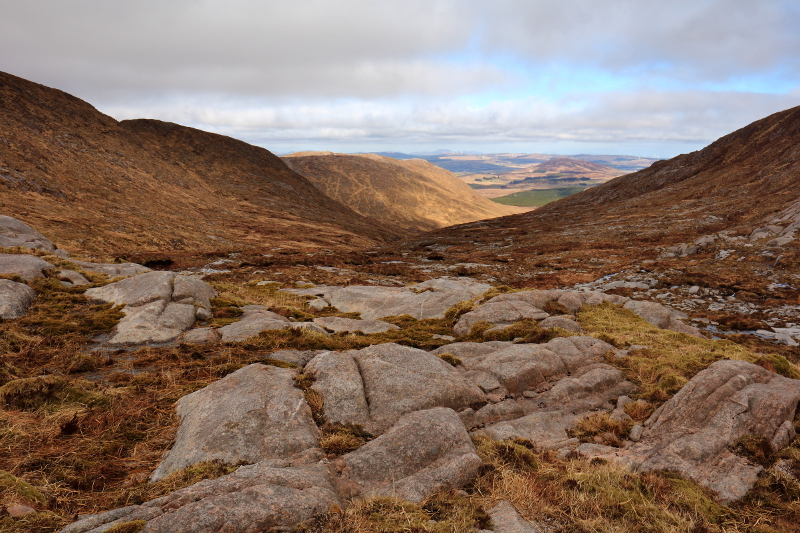 Soon I was ascending the southern side of Croaghanirwore.

On the way up Croaghanirwore, looking back to Croaghnageer.  I knew it would be sore on tired legs having to climb to steep slopes on the way back. 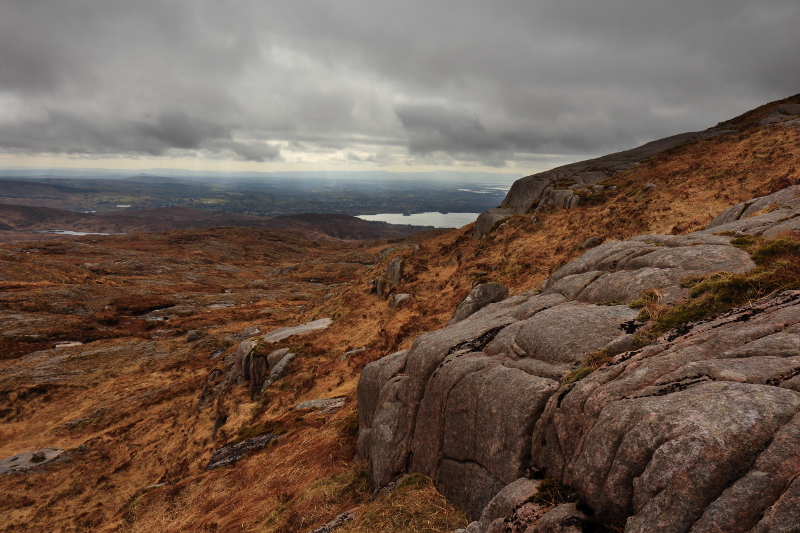 Lough Eske, and Donegal Bay with Benbulbin in Co. Sligo in the distance. 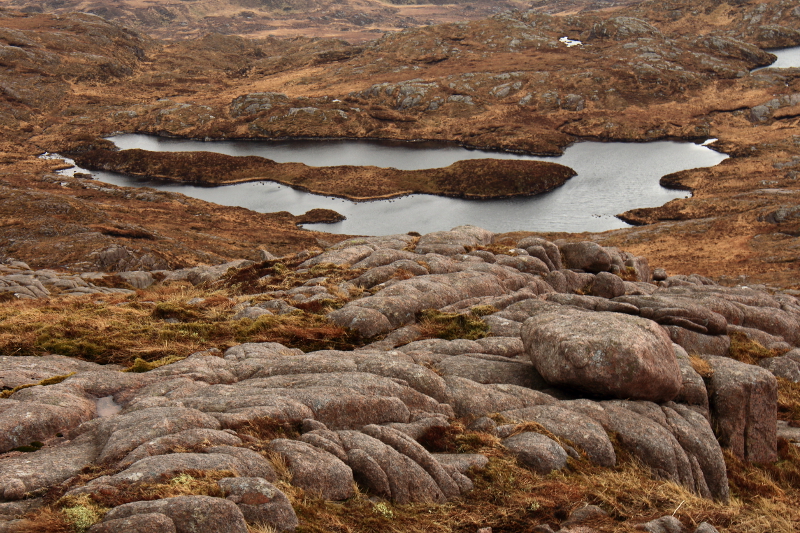 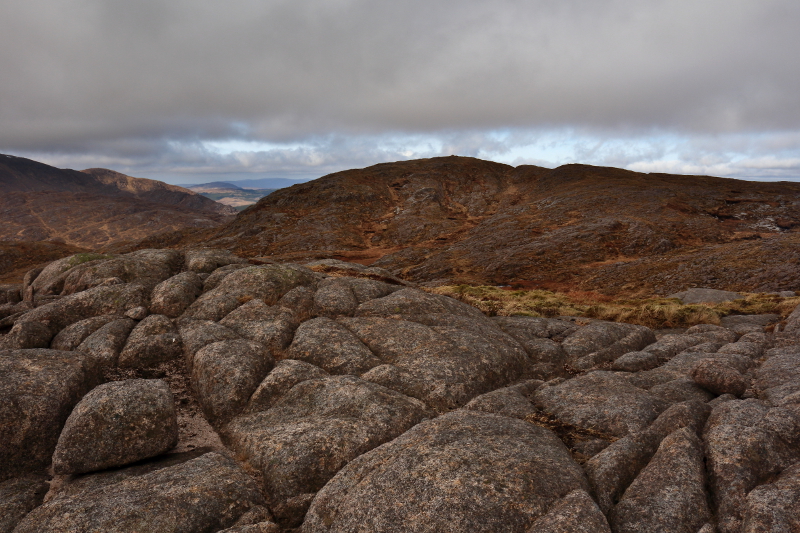 By now, the weather had really started to improve.  I was well on the way up to the top of Croaghanirwore, which was now cloud free, and I could also see the tops of nearly all the surrounding mountains.  I was enjoying the rocky terrain up here which had been sculpted into some amazing rounded forms with deep furrows in between.  The wider views were great too – numerous little loughs all around, mountains in all directions, the Atlantic to the west with views as far as Sligo, and previously hidden views over Lough Belshade and the main Bluestack ridge to the west and northwest. 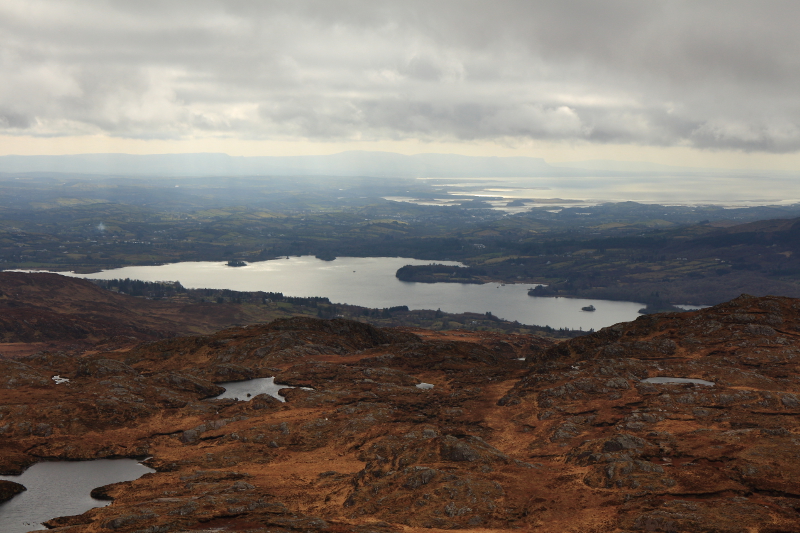 The summit of Croaghanirwore, not far ahead now, the cairn just visible at the top.

Despite the name of the range, there was a lot of this pink-hued rock in this part of the Bluestacks. 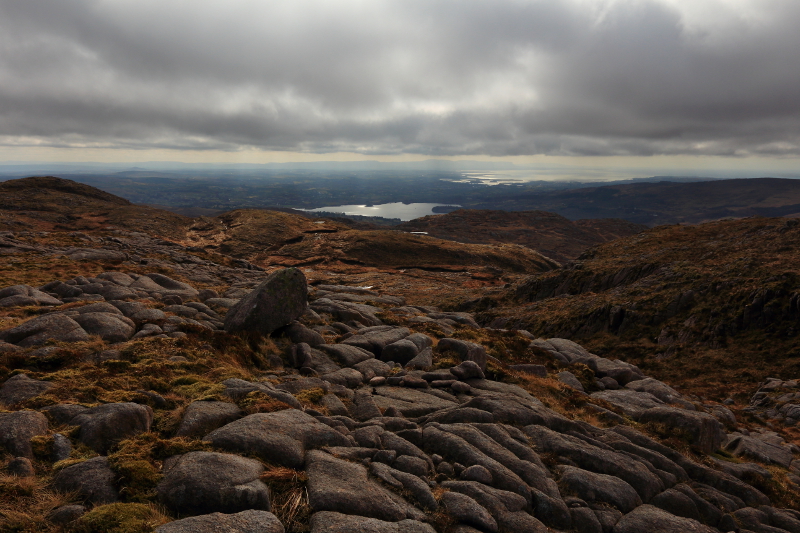 Really clear views to the north now over Meenanea and Cronamuck, to the far Inishowen and Derryveagh Mountains on the horizon.

At last, I was on top of Croaghanirwore, right in the heart of the Bluestacks, and as if to reward me for my efforts, the day was turning out beautifully, with increasingly blue skies and magnificent views of this remote part of the country.  Not an easy walk, and it had taken me about three attempts to get here, but well worth it.  I took quite a while to savour the summit and views now that I had reached it.

The cairn on top of Croaghanirwore. 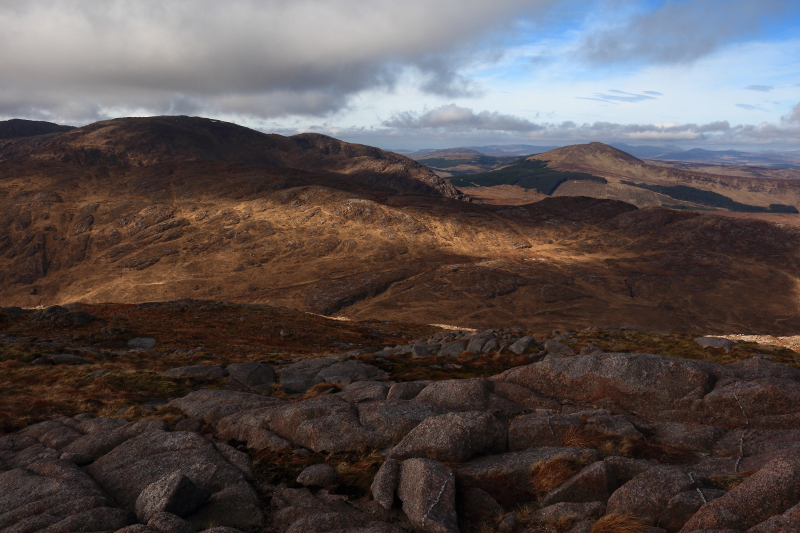 A look towards Croaghnageer and the way back.

A long post, but it had been a long walk, and now I had it all to do again on the way back.  But this time it would be in beautiful weather – still cool at this height, in March, but sunny and dry.  There had been some great views on the way in, and I was looking forward to seeing them without the grey skies.

2 thoughts on “Deep In The Bluestacks Part 1”