Making my way along the cliffs above Glencar Lough.

In Part 1 I’d gotten about half way on my walk from Glencar Lough, up to the cliff tops and along towards Kings Mountain.  I was making slower progress than I’d expected for several reasons.  I’d had to take a meandering route due to the deep fissures extending back in to the plateau from the cliff edge, and I had lost a lot of any fitness I had due a few months of inactivity caused by a bad back.  I was beginning to doubt that I would make it to the summit of Kings Mountain as darkness would soon be falling, and judging by my rate of progress, I would soon need to turn back.  The closer I got to Kings Mountain, the deeper and further back the gullies seemed to go, slowing me more, and taking their toll on tired legs.  On the plus side, the gullies themselves were interesting to walk through and around, and they forced me further into the plateau in some places, meaning I got to explore its varied terrain.

Looking across the plateau which forms a large part of the Dartry Mountains range.

The plateau was a mixture of bog, rock, little hills, cliffs and valleys, and the base from which peaks such as Kings Mountain, Benbulbin, Annacoona, Benwiskin, Tievebaun, Truskmore and Gortnagarn all arose.

Truskmore on the horizon, with a light dusting of snow.

Emerging out of yet another steep sided gully. 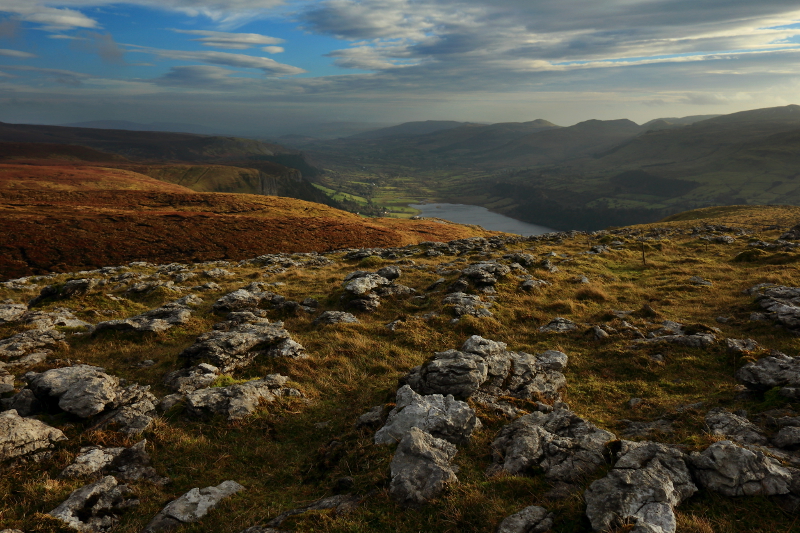 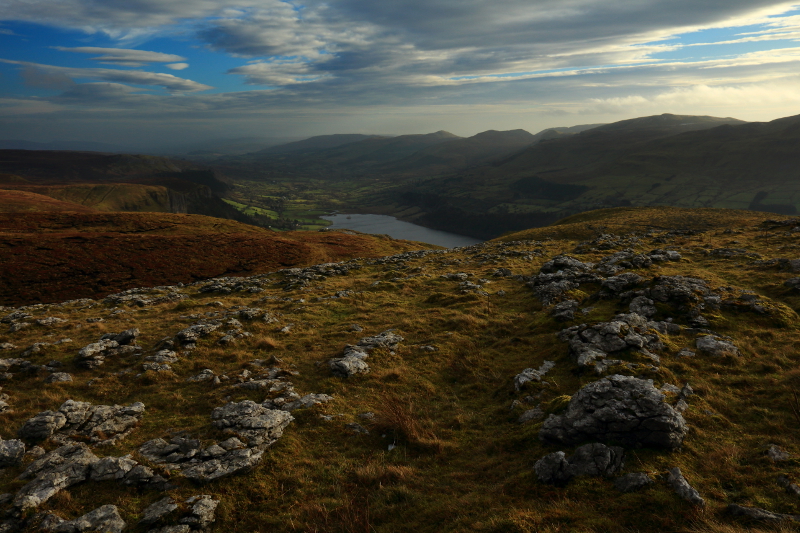 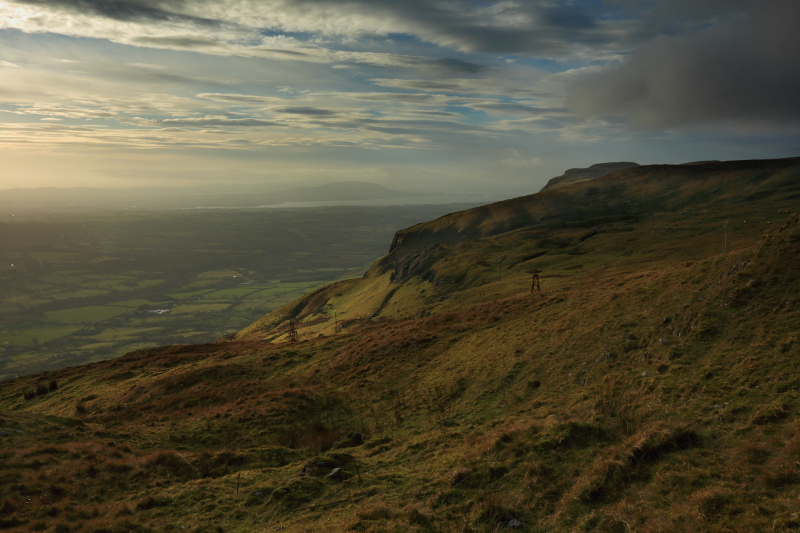 Cresting another rise, I came upon abandoned equipment from old mining operations which I hadn’t been expecting. 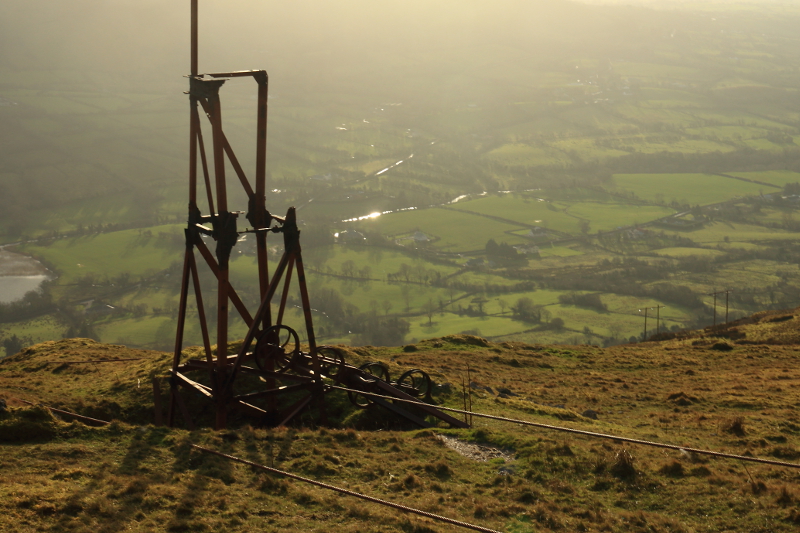 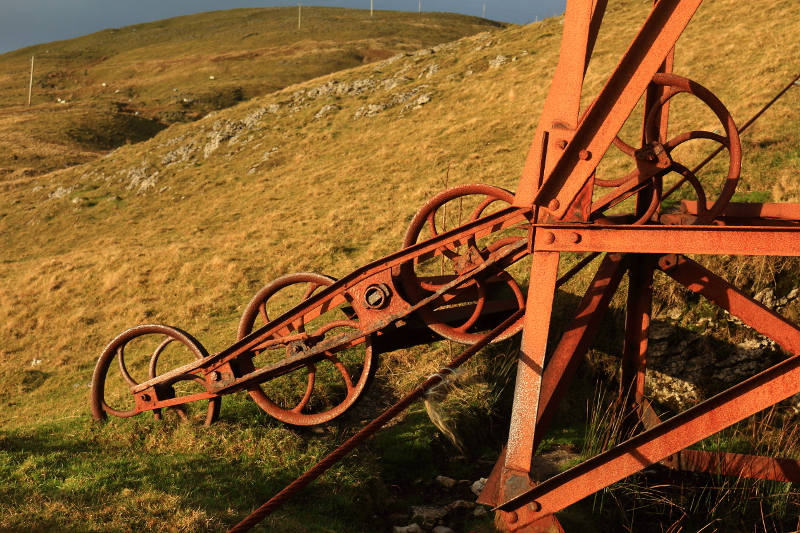 These stretched back into the plateau, where I could see the ruins of a building probably connected to the mining.  I could just about see more rusting equipment nearby, and would have loved to investigate further.  But, I still harboured ambitions to reach the top of Kings Mountain, if not Benbulbin, and couldn’t afford the time or energy for even this short diversion.  Ah well, an excuse to come back here again another day.

A last look at the abandoned building and equipment, and I pushed on again.

There were some sizable hills up here. 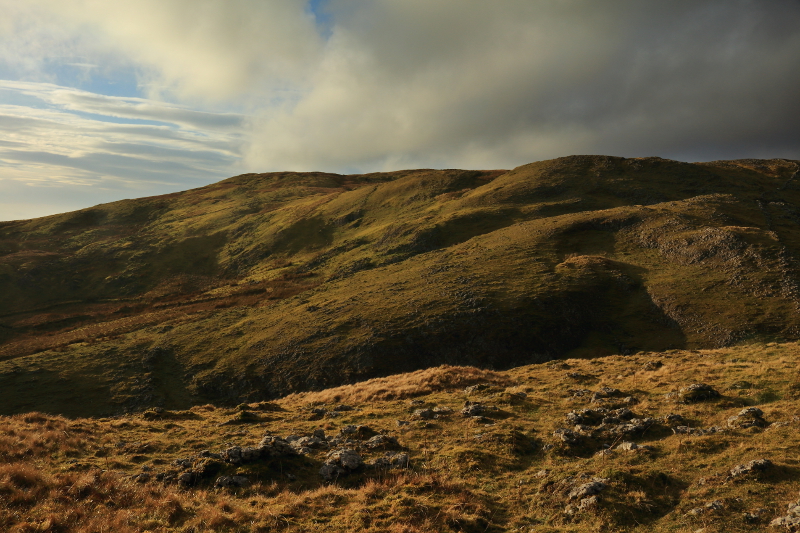 Another deep gully to descend into, with a fairly big climb on the other side, especially now that my legs were feeling it.

A choice of taking the direct route with steep descent and ascent, or walking further back where there would be less height lost.  I tended to compromise somewhere in the middle.

Looking along a gully towards the cliff edge.

And, emerging up the other side.

The high points were getting higher as I went west along the cliffs, offering great views in the evening light.

I eventually found myself standing on a high point between two of the gullies, and realised there was only one more to traverse before Kings Mountain.  Unfortunately, looking at the distance involved, and the greater descent and ascent than any of the others so far, I knew I wouldn’t be able to do it, and get back before dark.  I was not familiar enough with this area to get back down in the dark, and there were plently of dangerous drops and confusing terrain.  I was also getting very tired.

The last gully to cross, with Kings Mountain on the far side.

I estimated it would take me about 45 minutes to get to Kings Mountain, but the same to get back to where I now stood, leaving inadequate time to get back.  It was a wrench, but after a lingering look taking in the views, I turned to go back in the failing light. 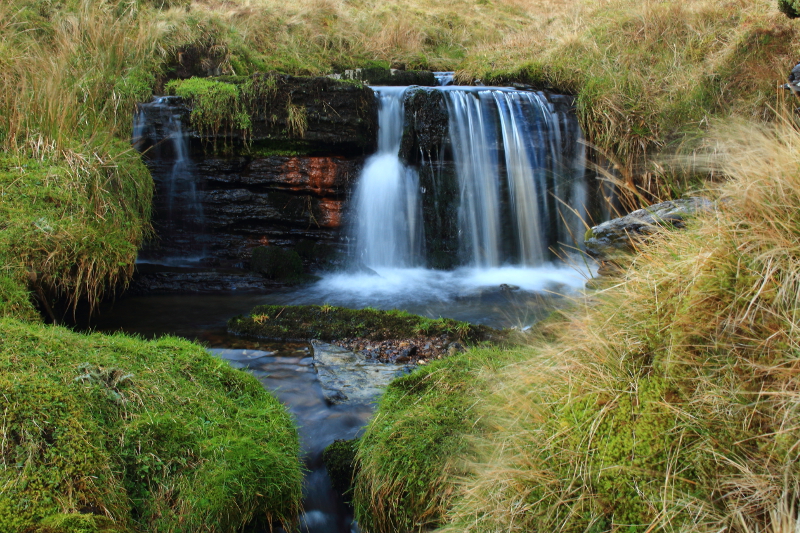 Crossing a burn on the way back, one of those which had created the huge gorges which had made the walk longer and more difficult, but had also been a huge part of its interest.

I would have liked to have gotten to the top of my target mountains, and no new tops had been “bagged”.  Even so, I was not really too disappointed.  It had been a magnificent walk, with beautiful scenery, and I could come back another day – perhaps when my fitness has recovered a bit!  And I could still enjoy the walk back out, despite my weariness, as the sun went down.

On the way back.

Almost back down in the valley and the shores of Glencar Lough where the car was parked.

I was shattered by the time I got back to the car, and it was heaven to sit beside the lough, enjoying the views in the last light, before starting the long drive home.  It is hard to describe the feeling of contentment you get after a day walking in the mountains, but it makes all the weariness worth it – aches, pains, hunger, cold or wet seem trivial, even satisfying in a way, and you are always glad you ventured out. 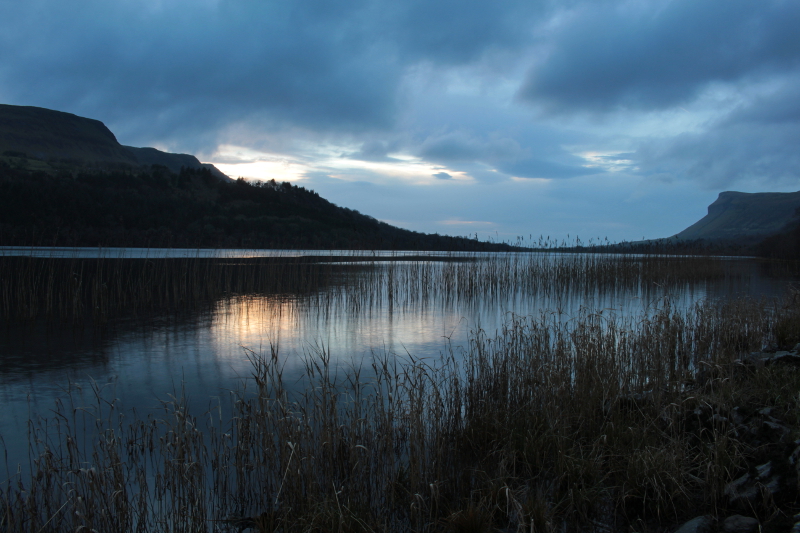