Looking along the line of cliffs leading to Kings Mountain.     This walk, which I undertook at the end of December 2014, has to be one the best days I’ve spent in the hills, even though i actually failed to reach my two main objectives for the day.  I had planned to take in Kings Mountain and Benbulbin, both in the Dartry Mountains, leaving home early for the fairly long drive to the border between counties Sligo and Leitrim.  I had a choice of ascending on to the ridge linking the mountains, midway between them, or continuing on to the east of Kings Mountain and approaching them from Glencar Lough.  I had magnificent views of both mountains on the drive down, but I was finding it difficult to find a convenient spot to park, and get on to the ridge without walking very close to houses and farms.  There are notorious access problems to these mountains, with some local farmers being vehemently opposed to walkers on their land.

Great views of the mountains on the way.

Instead of ascending the ridge, I decided to push on to Glencar Lough, where there was plenty of parking and paths with no access issues.  Despite the long drive to get here, I would still be able to make an early start, which I knew I would need, as the walk was long, and the daylight brief this close to the shortest day of the year.  Despite being conscious of time, I couldn’t help lingering on the shore of the lough, just over the county border on the Leitrim side.  It is a stunning location. 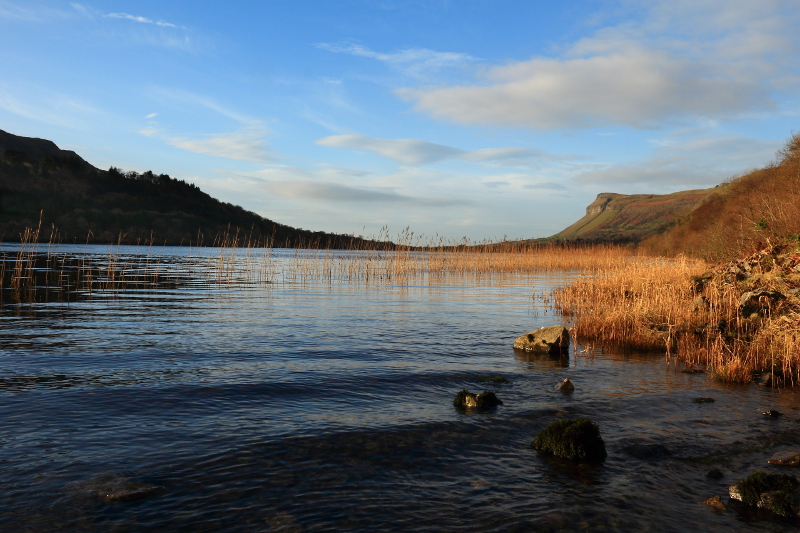 Parked near the eastern end of the lough, a short walk along the road led to a track climbing steeply up the cliff face, winding back and forth through coniferous forest.  This was a pleasant hike with the scent of pine and resin in my nostrils, and birdsong in my ears.  It was a steep path up the cliffs, and the only blot on this otherwise enjoyable stage, was a bit of a dent to my pride.  This was my first long walk since a bad back had put me out of action for a few months, and my stamina had definitely suffered.  On the way up I passed a group of what looked like octogenerian ladies, who had paused to take off their outer, waterproof layers.  They resumed their walk soon after I passed, and I was disconcerted to find that they were matching me step for step.  I was determined not to be overtaken by such an elderly group, and although I had smiled benevolently when passing them, I soon began to regard them with darker feelings.  As I gasped for breath with aching legs, they pursued me relentlessly.  I felt like Butch Cassidy or the Sundance Kid being hounded by trackers across a rocky South American wilderness!  Eventually, I emerged from the forest at the top of the cliffs, giving me an excuse to pause and take in the views.  They were a friendly group, and I couldn’t maintain my ill will, but I was glad to find on talking to them that they were heading in a different direction from me, and I wouldn’t have to compete any more. 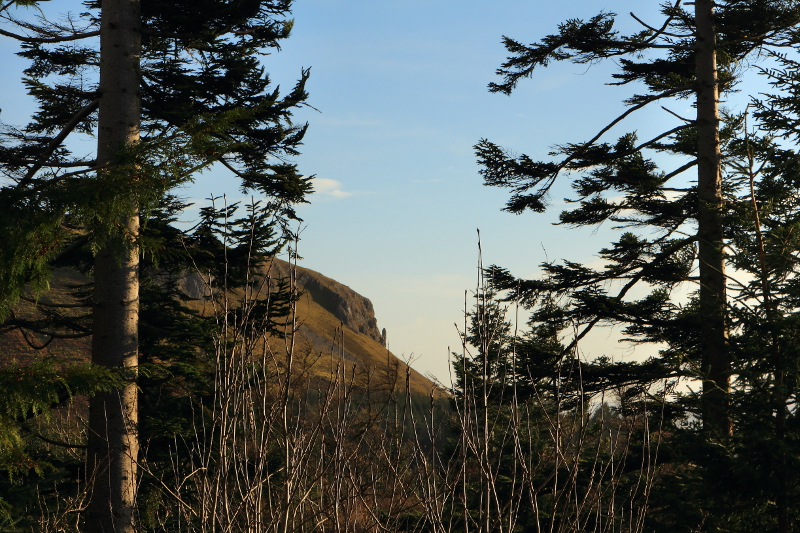 Looking through the trees, near the cliff top, and the spectacular landscape began to reveal itself.     At the top of the cliffs, I was standing on the edge of a huge plateau, which made up the main part of the Darty Mountains.  The nearby peaks all rose up from this plateau, but even the ground between them was far from flat.  It was undulating, with peaks and troughs, hillocks and small cliffs.  I would walk along the edge of the plateau, following the cliffs west towards Kings Mountain.  Initially there was a path, with even the incongruous sight of signposts in an otherwise wild bog. 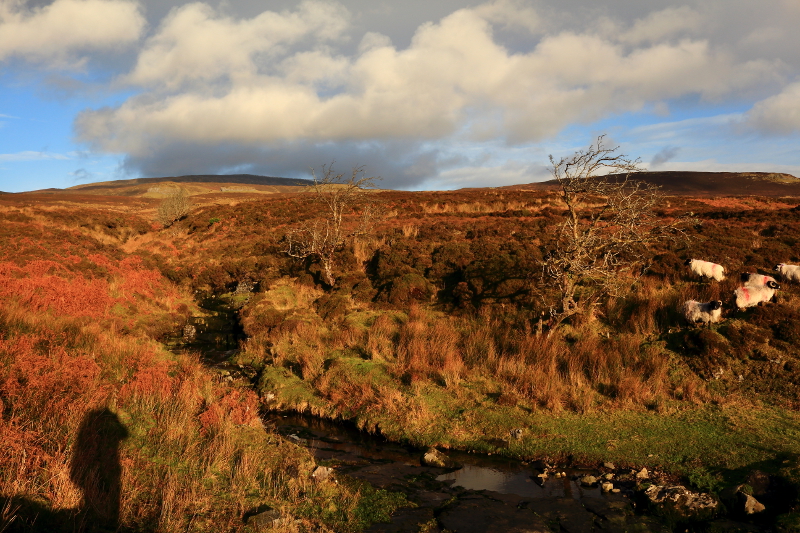 Up on the plateau.

The peaks of the Dartry Mountains rose out of the plateau, along with many other small hills and little cliffs. 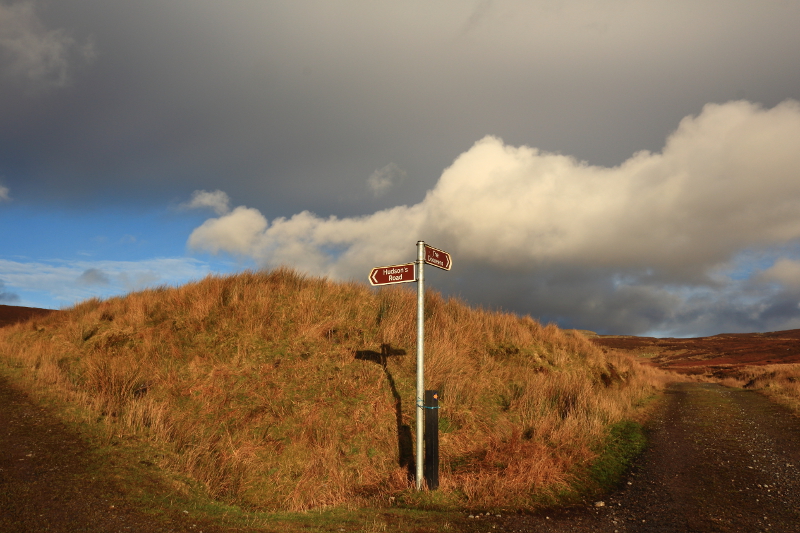 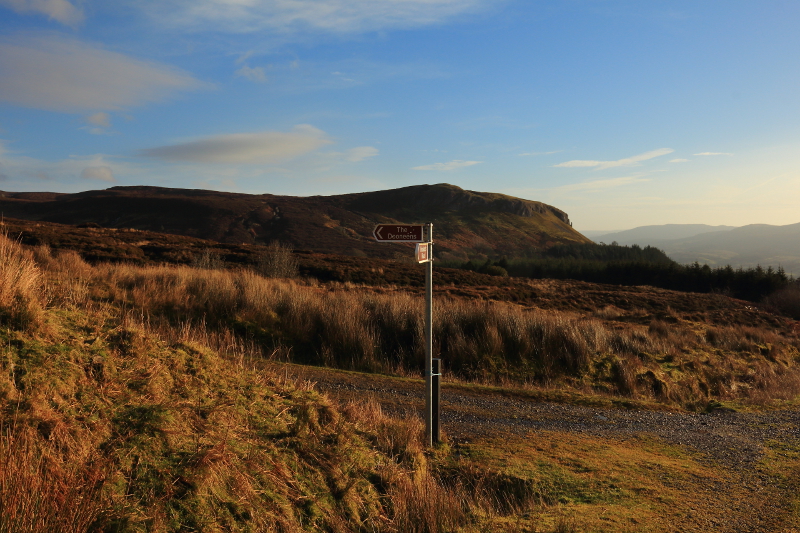 Some of the smaller cliffs in the distance further in on the plateau.     After only a few metres I had to leave the path and strike out across the bog to head west towards Kings Mountain.  As I followed the cliff edge along, it became apparent that travelling in a straight line wouldn’t be possible, as the edge of the plateau was split by deep gorges made by burns as they made their way off the boggy raised area, and over the cliffs to the valley below.  I would constantly have to move more towards the centre to cross the gorges where they became less steep away from the edge.  I found myself thinking of this as moving “inland”, even though it wasn’t the sea at the base of the cliffs, just the Glencar valley.  I could have stayed “inland” and took a straighter route, but I would missed out on the views over Glencar Lough, along the valley, and along the line of the cliffs themselves.  This route, in and out from the cliffs added a lot of distance, and the the terrain was often difficult.  The views along the cliffs were stunning and constantly changing however, and well worth the effort.

Looking down on Glencar Lough and the forest I had come through on the way up.

Looking west along the Lough.  You can see Knocknarea overlooking the sea in the distance. 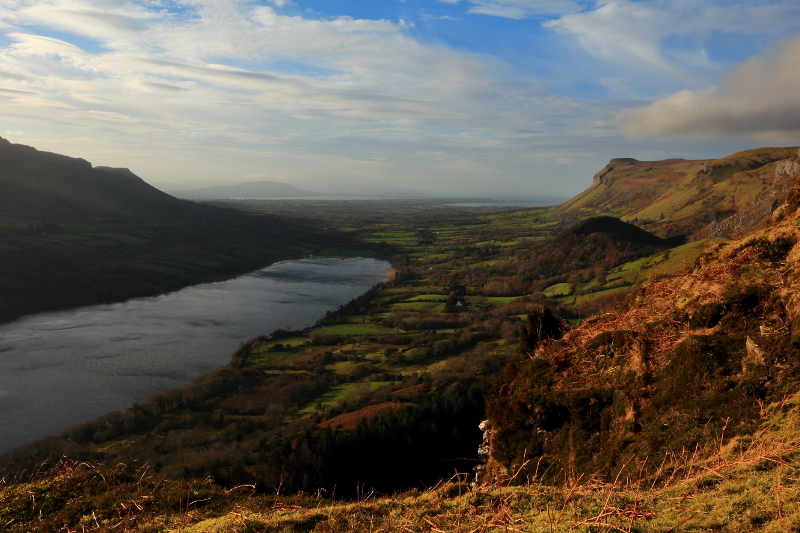 There were great views along the cliffs westwards to Kings Mountain.

Cloud obscuring the sun and giving a different feel to the landscape.

Moving “inland” to get round one the gullys that cut deeply in the cliff edge.  These got deeper the closer to King’s Mountain that I got, and even after walking further into the interior of the plateau, involved quite a bit of descent and ascent. 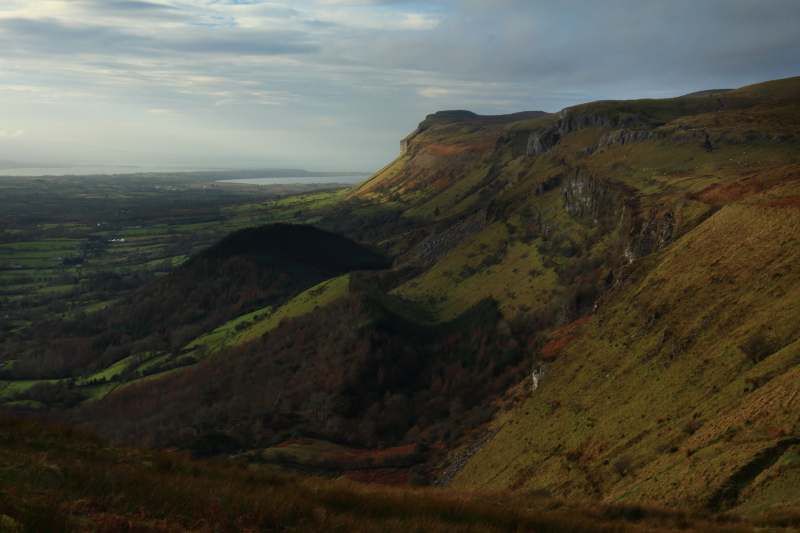 The furthermost prominence isn’t actually King’s Mountain, as there is another deep gully behind it, with the summit hidden on the other side.     As I moved around the first gully, I was surprised to see the ruins of what looked like an old stone cottage.  I went down to investigate, not expecting to find any houses up here, even abandoned ones, but seeing its location beside a burn, with wonderful views to the east, I thought “why not”?  It would be a beautiful spot to live. 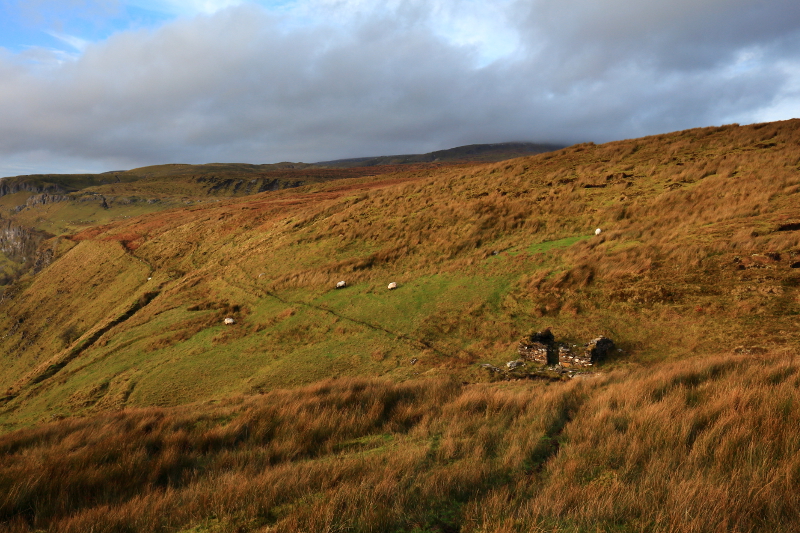 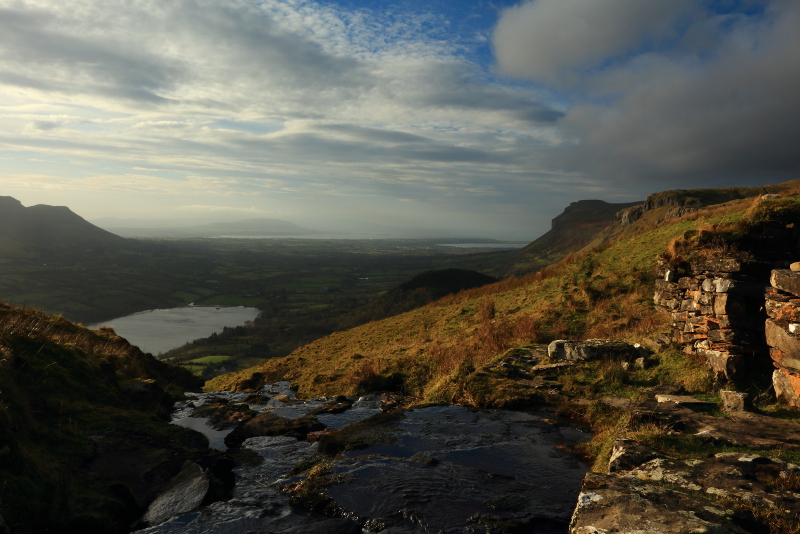 After that, I continued, walking in and out from the edge, up and down the increasingly large gullies, alternatively getting views along the valley below, or into the interior of the plateau. 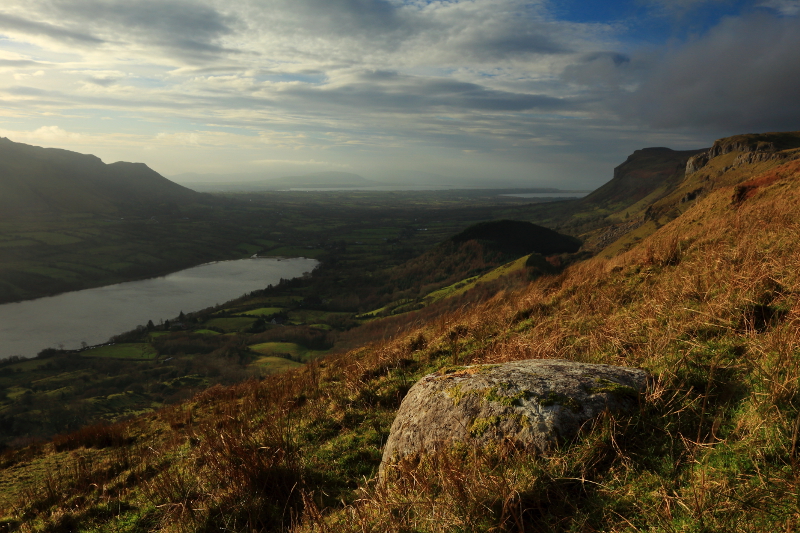 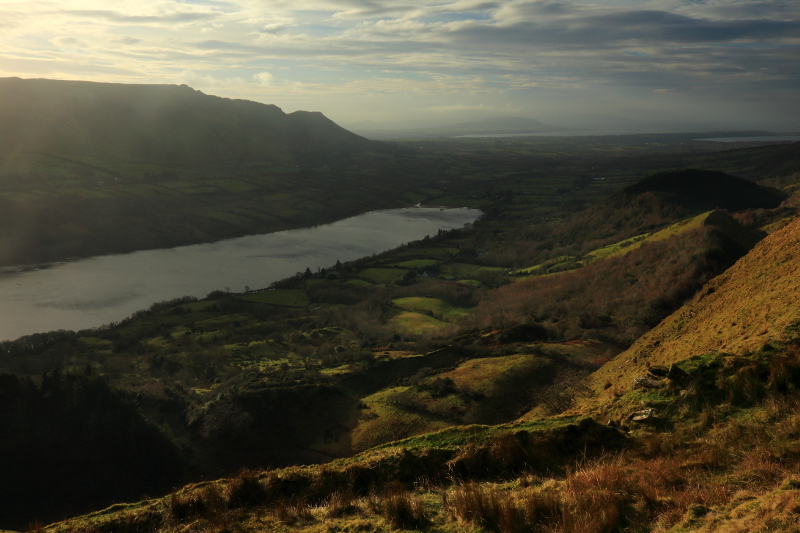 The short winter days have both advantages and disadvantages for the hill walker/photographer.  On the plus side, the sun remains low for most of the day, providing nice light and raking shadows across the landscape.  On the other hand, there is less time to complete a walk, and all the detours on my zig-zagging route, meant that I now began to have doubts about reaching the summit of Kings Mountain.  The long drive to Glencar, with all the distracting scenery on the way, meant that I didn’t get started until almost noon, with darkness due about 5pm.  As this was unfamiliar territory for me, with complex terrain, and big drops, even far in from the edge of the plateau, I didn’t want to be walking back in the dark.  I decided I would walk until about 3pm, which would mean I had done 3 hours, leaving 2 hours to get back before dark, thinking I would be a bit quicker on the return leg having a little more familiarity with the terrain.   At times now, it got quite gloomy when the sun was obscured, and the wind picked up until it was very strong.  Even when the sun re-appeared, the wind chill meant it was very cold. 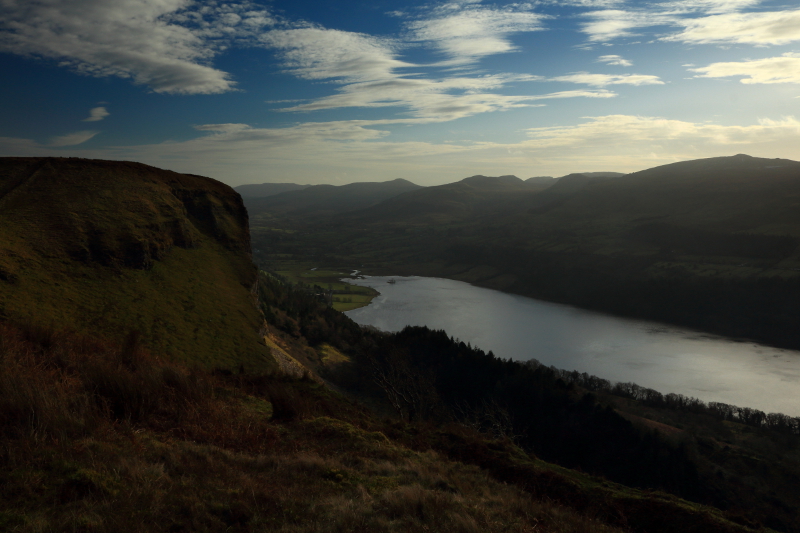 In one of the gullies, the burn that was tumbling over the edge to create a waterfall into the valley below, was now caught by high winds and most of it was being blown back up on to the plateau as a fine spray.  I believe this is often referred to as a mare’s tail.

A waterfall forced to reverse by the wind.

One of the small burns that created the huge gullies – given gime anything is possible.   By now I was getting even more doubtful about reaching Kings Mountain, nevermind Benbulbin.  The walk was taking longer than I expected due to the difficult terrain in places, the many diversions, and the views which I was constantly stopping to admire.  There was also my slow progress due to loss of fitness from all my recent enforced inactivity.  There was still a long way to go, and plenty to see, and I’ll finish in Part 2.