Looking north as I made my way up Croaghgorm.

The next stage in my walk along the central ridge of the Bluestacks was Croaghgorm, having already walked from the Reelan Valley over Ardnageer and Ardnageer SW Top.  I was still feeling good as I dropped down from Ardnageer SW Top on to the col between it and Croaghgorm, and the rise ahead didn’t look too daunting.  The weather was still holding up too, although the skies were maybe becoming a bit more “dramatic” in some directions.  The ascent was a little higher than in moving from Ardnageer to Ardnageer SW Top, so I took plenty of stops to both catch my breath and take in the views.  To the north was Croaghanard Lough, east more of the Bluestacks, south and southwest was Lough Eske with Donegal Bay beyond.  The views to the west were still blocked by the massive bulk of Croaghgorm itself.

Croaghgorm is 674m high, the highest peak in the Bluestacks.  Its name in Irish is An Chruach Ghorm, which means The Blue Stack, and gives the range its name.  It is a big broad mountain with a large summit area, with many little gullies and minor summits on its mass.

The white quartz mound on Ardnageer SW Top’s slopes in the background.

Lavagh More sweeping down, with the Reelan Valley hidden behind.  I would have a fairly long walk along that valley to do after Lavagh More to get back to the starting/finishing point. 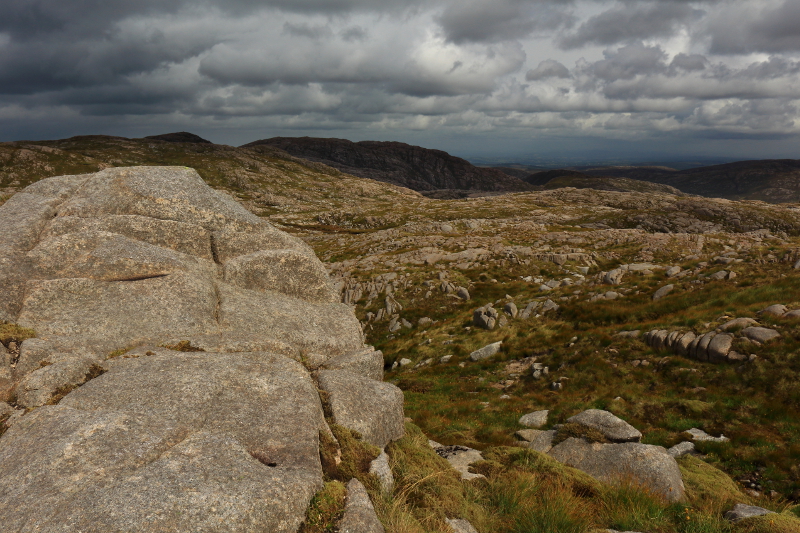 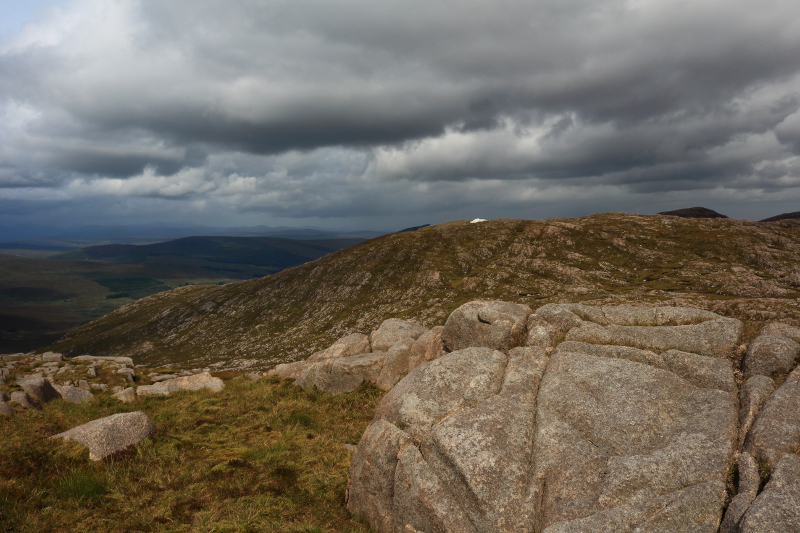 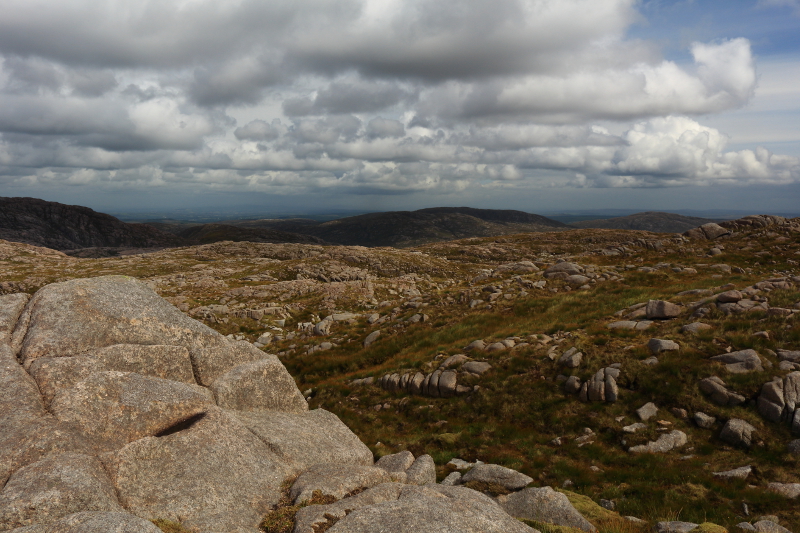 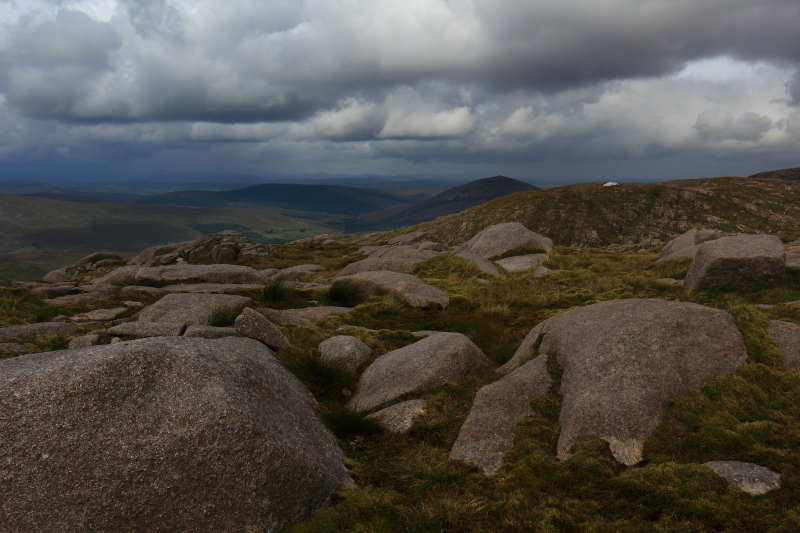 As I was still making my way up Croaghgorm’s slopes, the sky in some parts was becoming very dark and threatening, and it looked like the good weather I had enjoyed so far could come to an end. 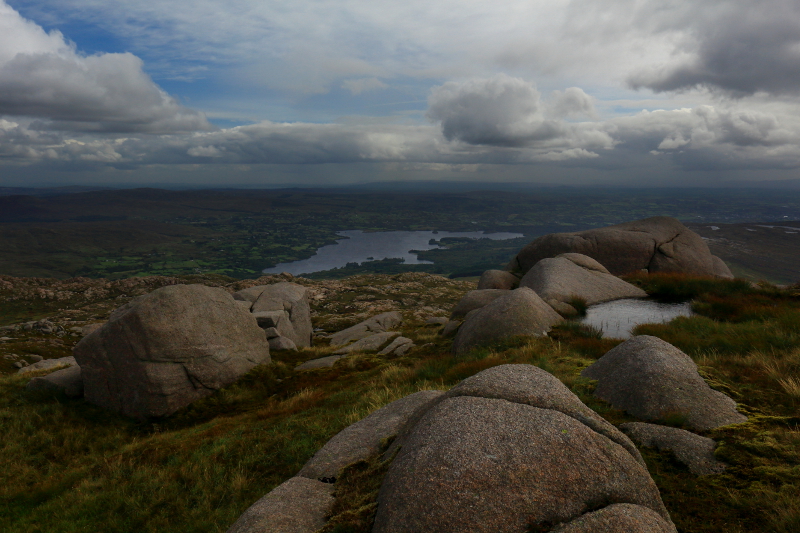 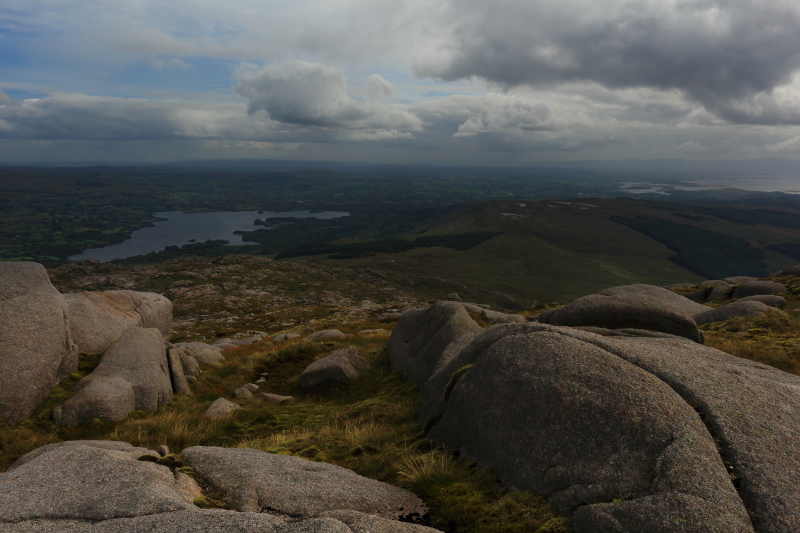 As I stepped up on to the broad summit area, all the patches of blue sky now seemed to be distant and shrinking.  For the first time too, after this most recent ascent, my legs began to feel the strain, particularly my knees – always the most treacherous part.  It was getting late in the day too, and I wondered if I would end up making my way across the bog to the road the car was parked on, in darkness.  That part of the walk would be a bit of a slog at the best of times, as I would certainly be tired with aching knees, and darkness would make the difficult terrain harder.  it had been my intention, after Croaghgorm to continue to Lavagh More and Lavagh Beg.  Now, with what looked like bad weather and darkness closing in, I began to doubt if this would be possible for the first time.  For now however, I was just happy to be reaching the top of Croaghgorm. 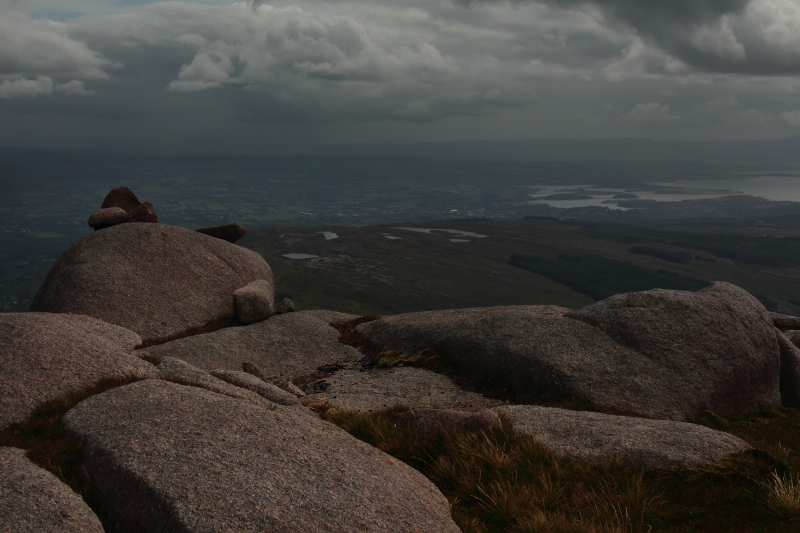 Despite the feeling that time was becoming a bit of an issue, and increasing weariness, Croaghgorm was a big mountain, and I now took a bit of time to wander around the summit, so much so that I’ll continue the walk around the top in my next post – Bluestack Walk: Croaghgorm Part 2.