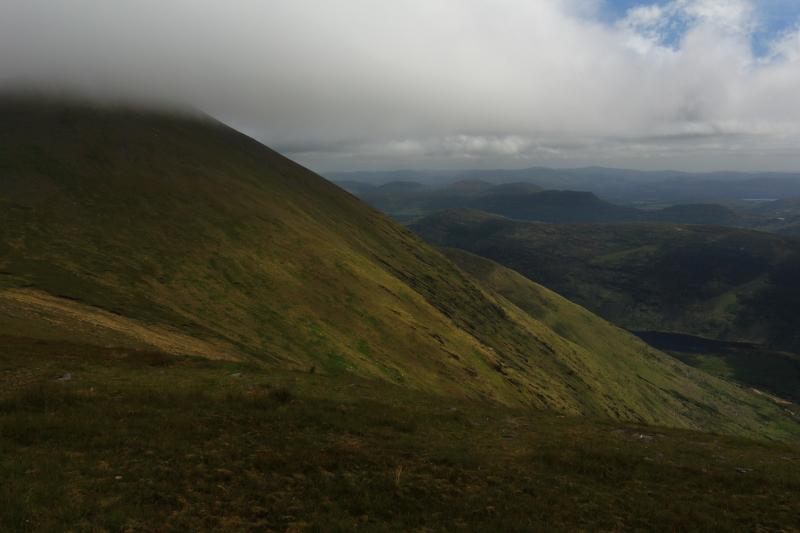 On top of Cnoc na Toinne. 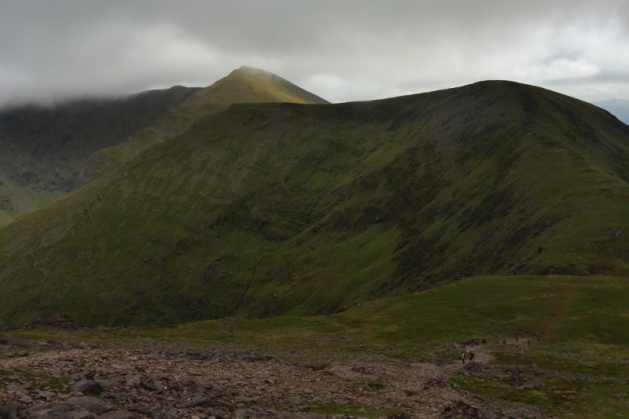 Zoomed in on part of an image taken on the way down from Carrauntoohil.  The nearest mountain is Cnoc na Toinne, and on the far left of the frame, it is just possible to see the “Zig Zag” track leading down from the top.

In my last post, I described the journey down Carrauntoohil, and explained my decision to continue over Cnoc na Toinne.  This was due to improving visibility and light, and my noticing the Zig Zag descent from Cnoc na Toinne, which I could use to get back down to the Hag’s Glen.  Standing on the col between Carrauntoohil and Cnoc na Toinne, most of the height required to reach the summit had already been gained, and it was a relatively short walk to the top. 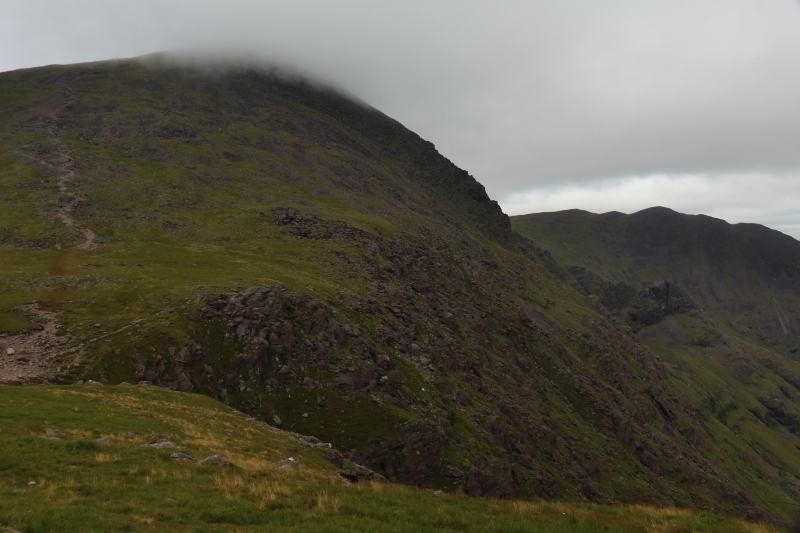 As I started up Cnoc na Toinne, looking back, annoyingly Carrauntoohil was now almost completely free of cloud, in contrast to when I was at the summit.  Unfortunately such is the lot of the Irish hill walker – the weather is never reliable. 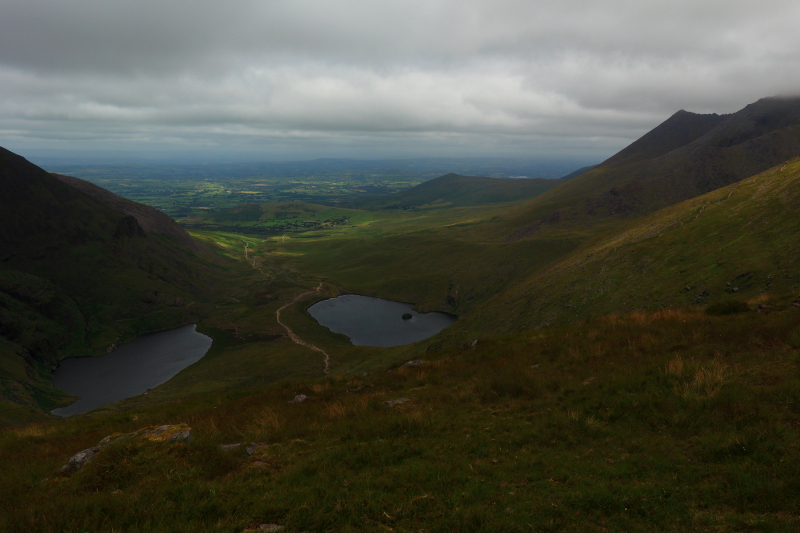 Looking down on Lough Goulagh and Lough Callee. 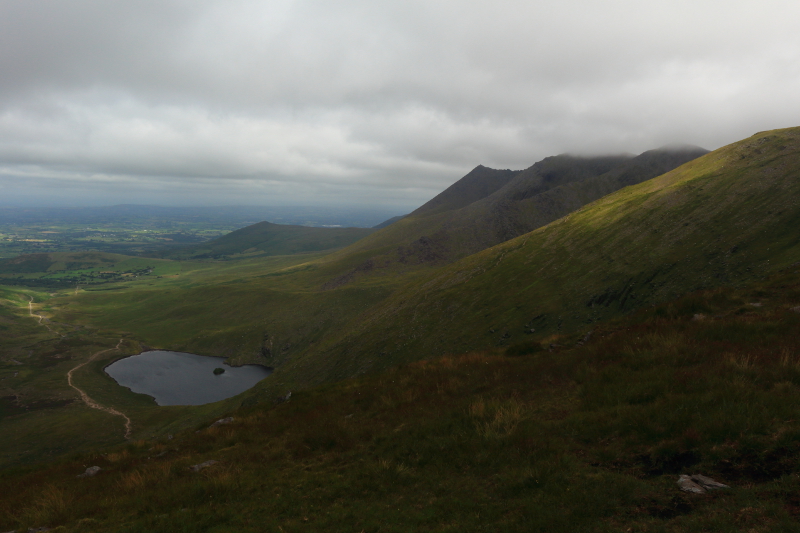 Lough Callee and the northern side of the eastern Reeks. 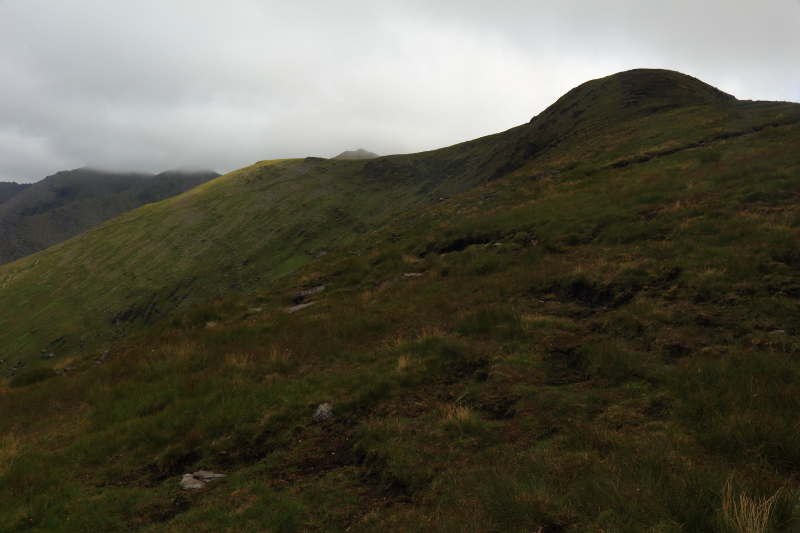 Looking up to Cnoc na Toinne’s long summit area, the highest part being at the nearer western end.

Looking along the Bridia Valley. 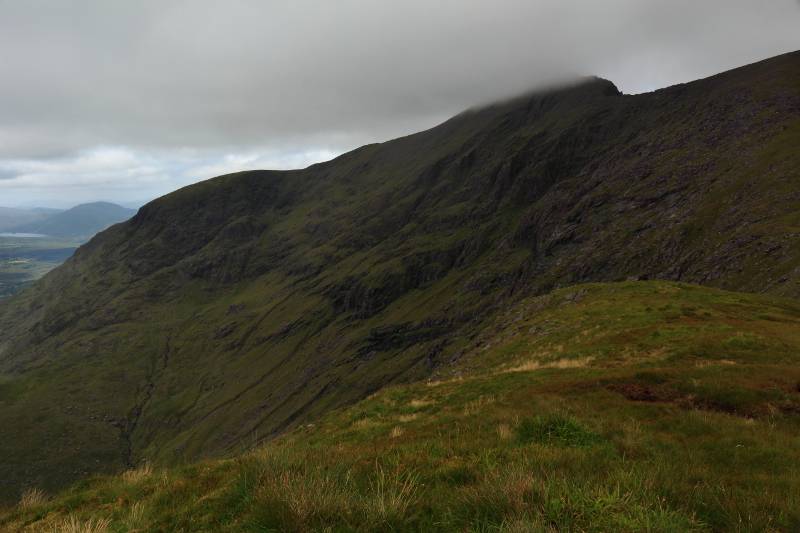 A view back towards Caher. 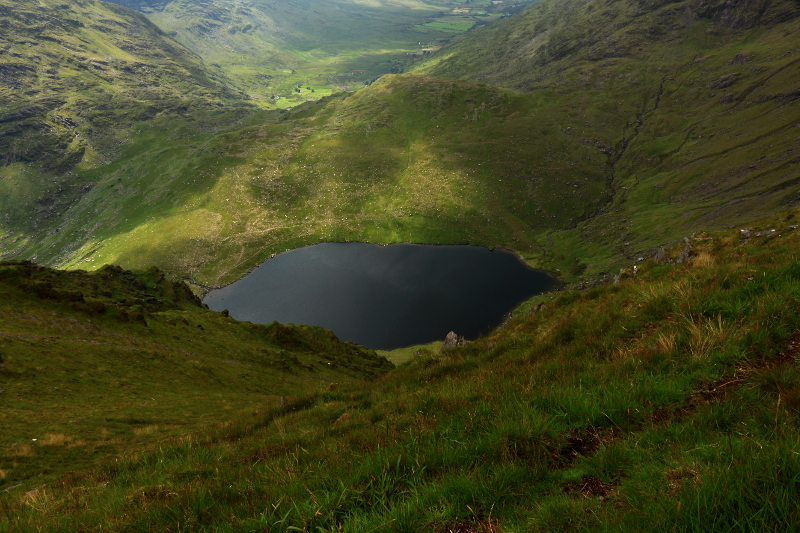 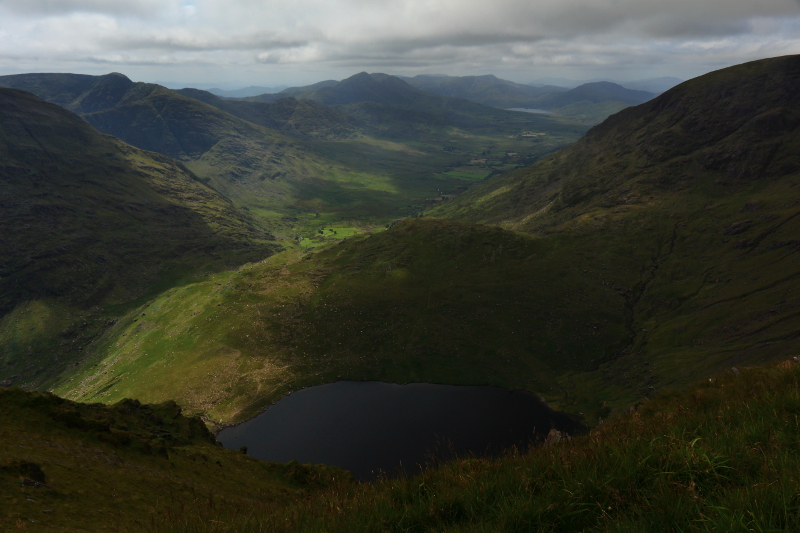 Looking over Curraghmore Lake to the Bridia Valley. 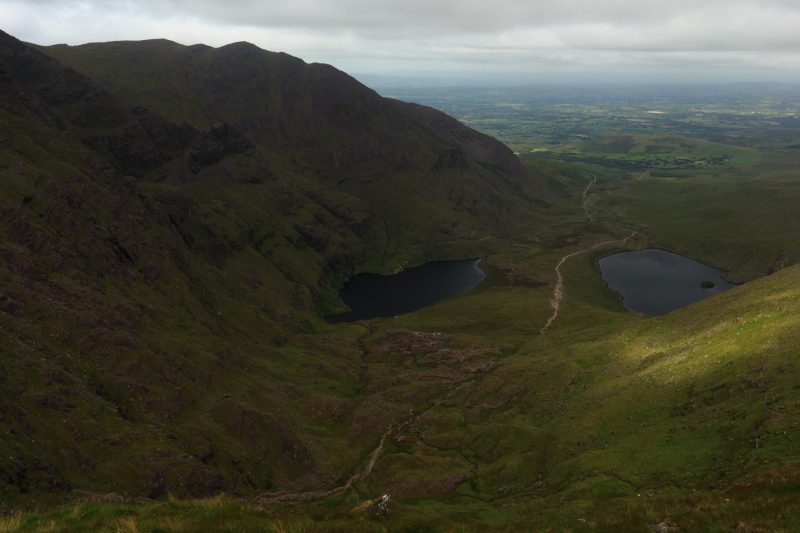 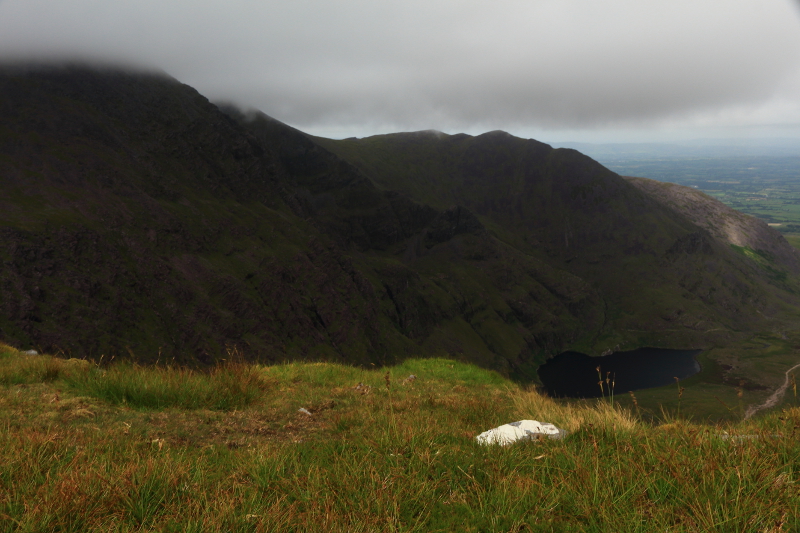 Beenkeeragh, topped by clouds, on the left, with Knockbrinnea behind to its right.

As I approached the summit, visibility was better than it had been on Carrauntoohil, allowing great views over the Dunkerron Mountains to the south. 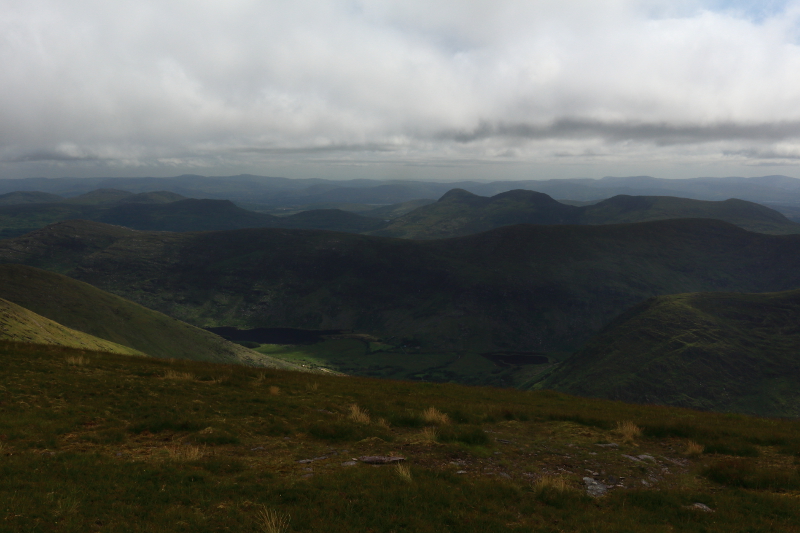 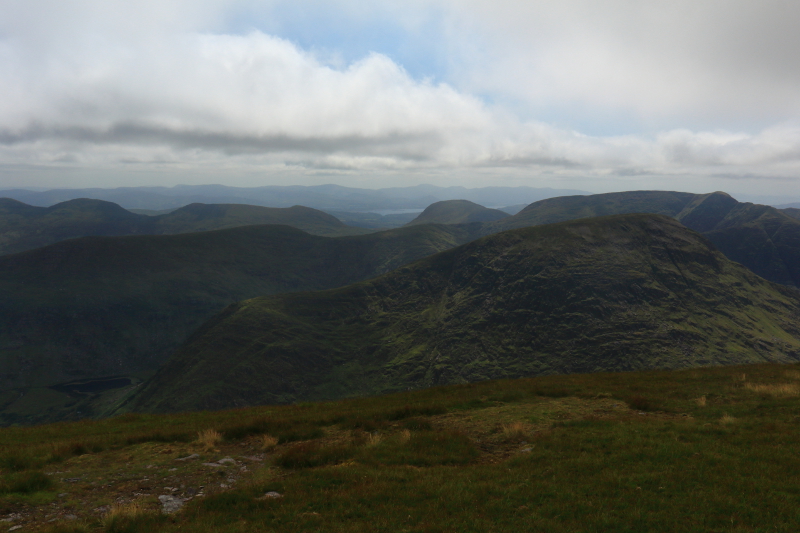 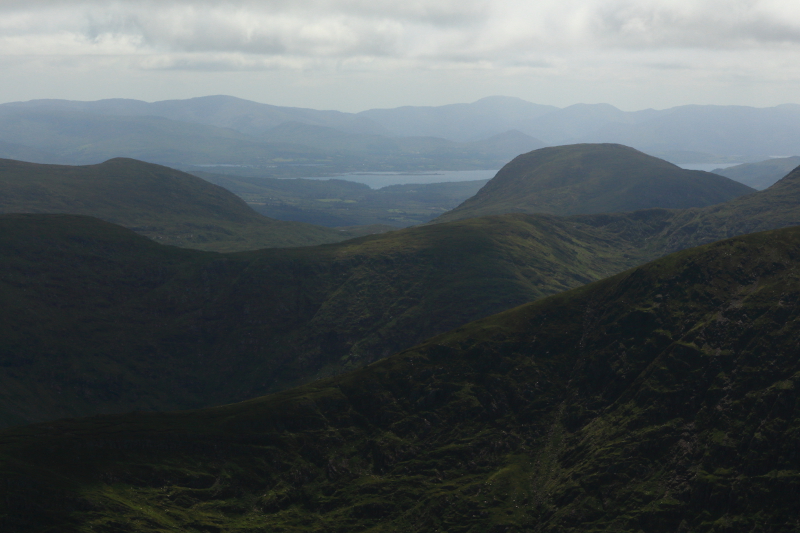 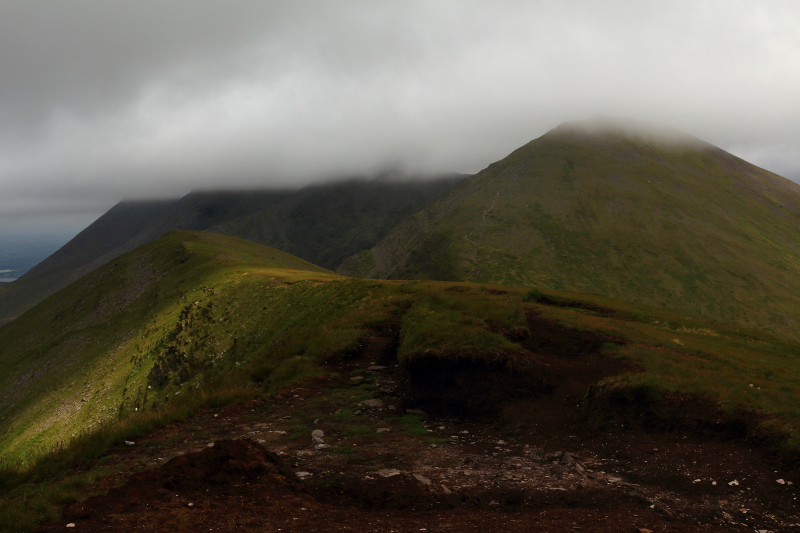 Stepping on to the summit, and better views now too, of the eastern Reeks.  Here, Cnoc an Chuillin can be seen with its top skimmed by clouds. 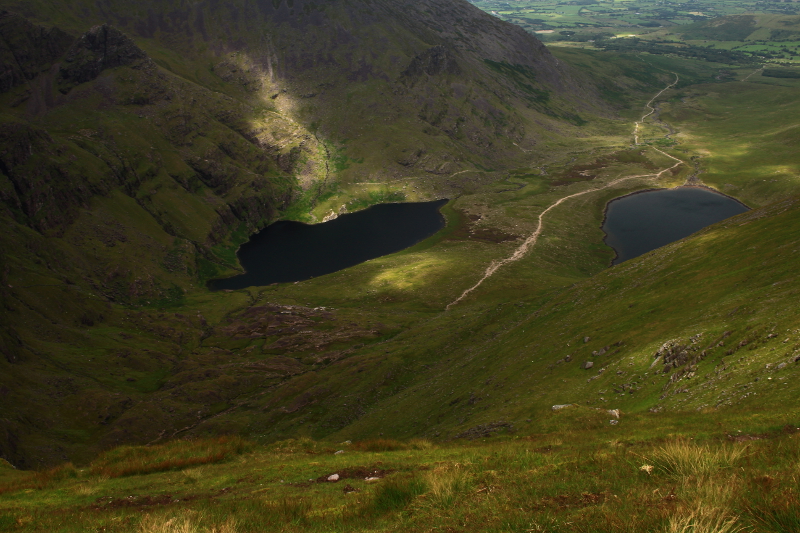 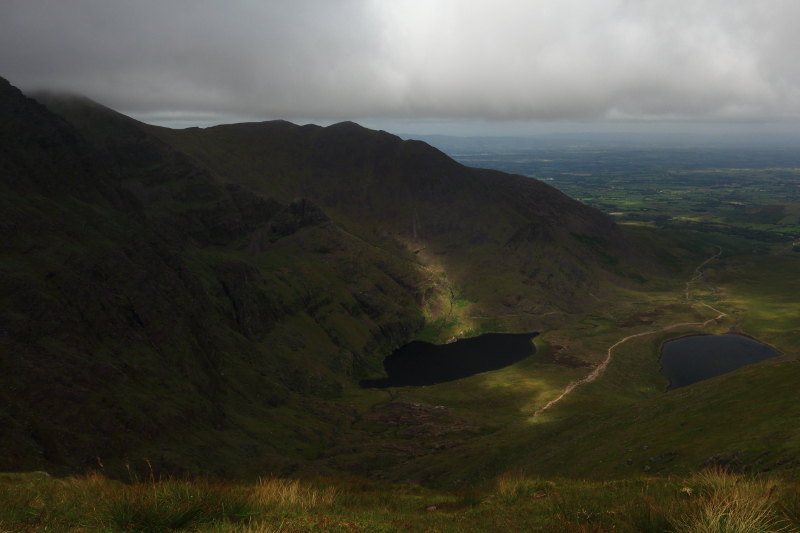 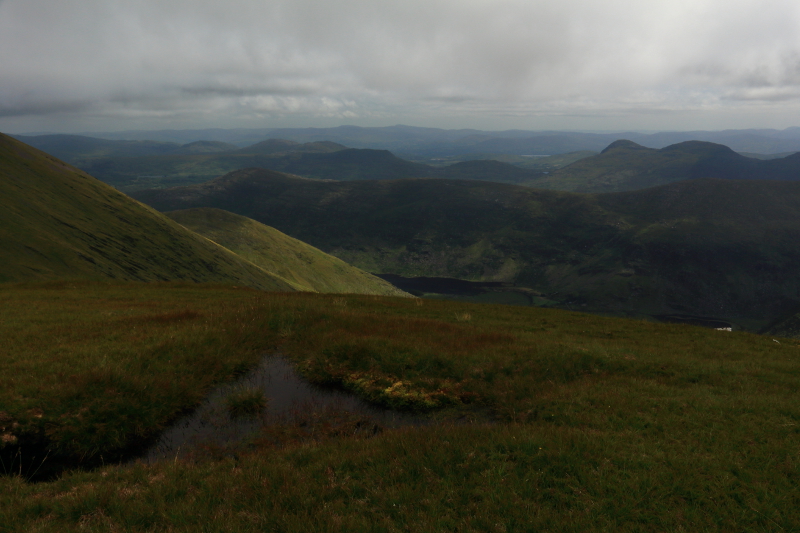 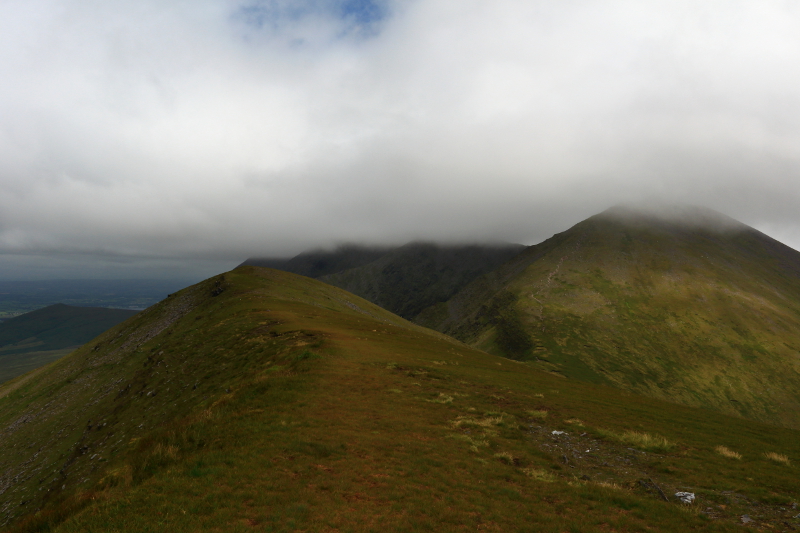 Looking east along Cnoc na Toinne’s long summit area, with Cnoc an Chuillin on the right. 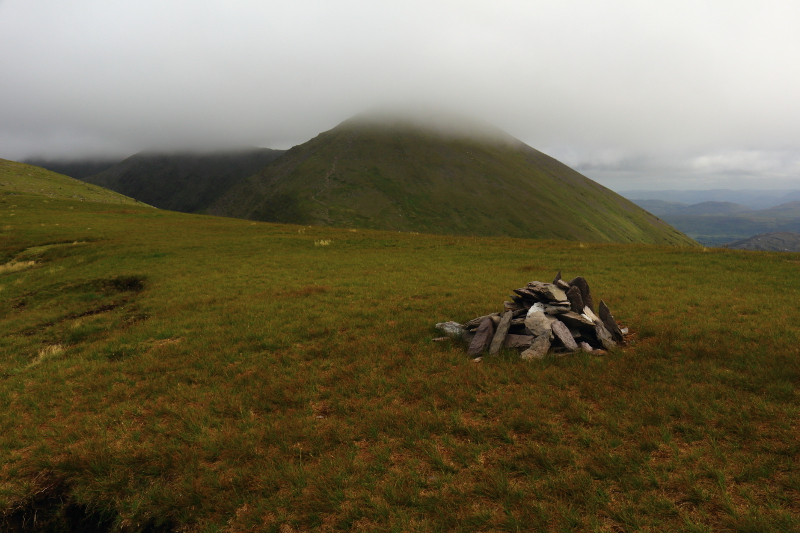 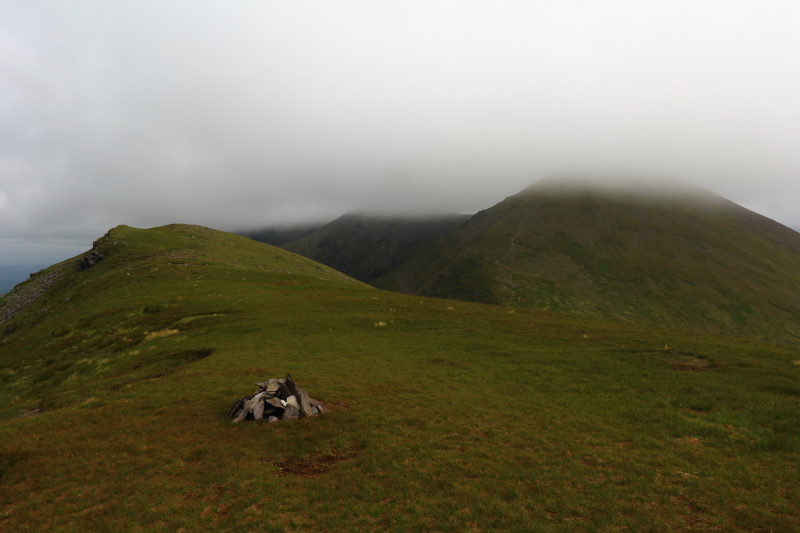 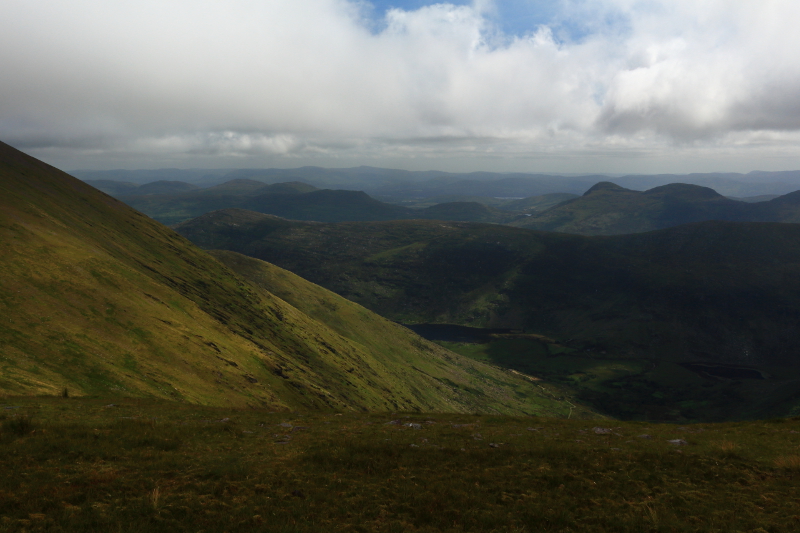 Cummeenduff Lough, in the Black Valley, peeping out from behind Brassel Mountain. 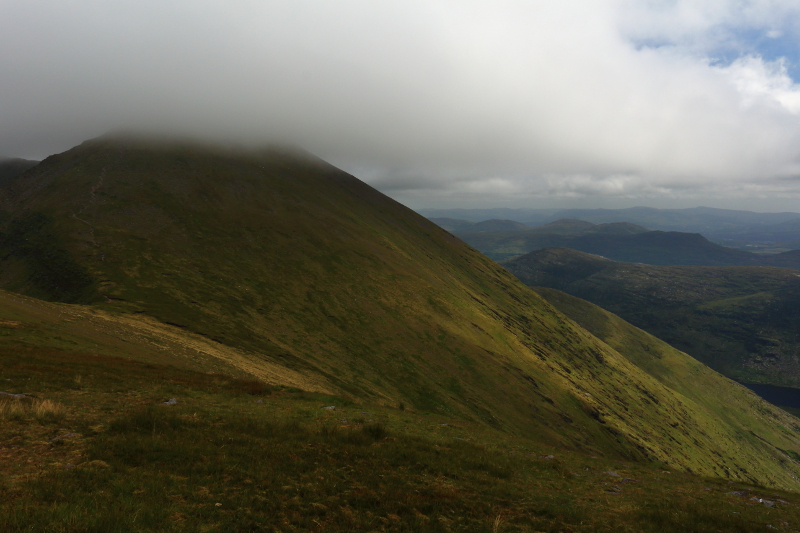 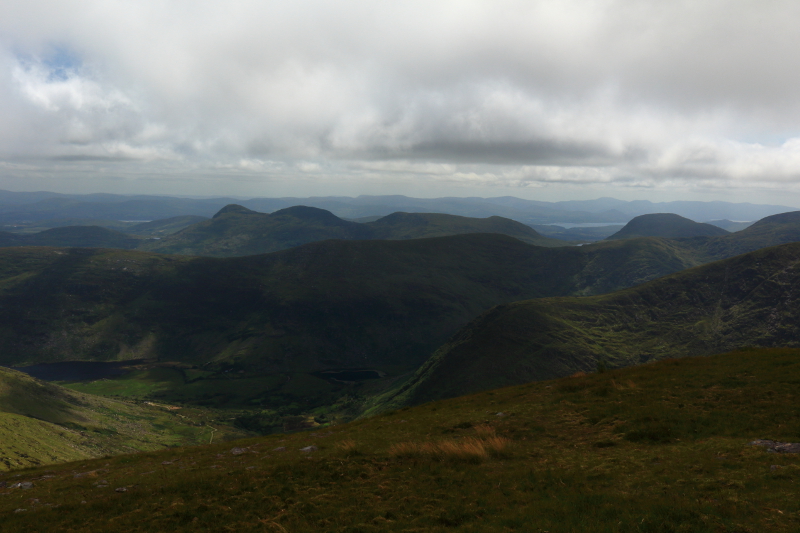 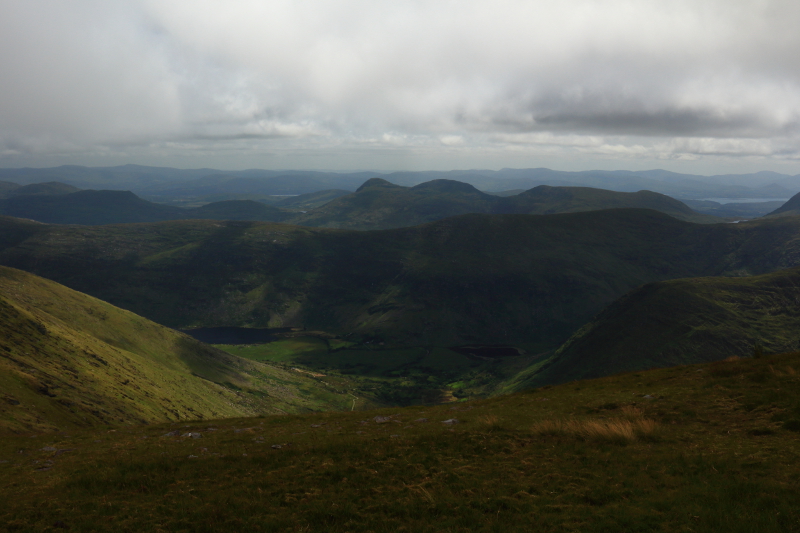 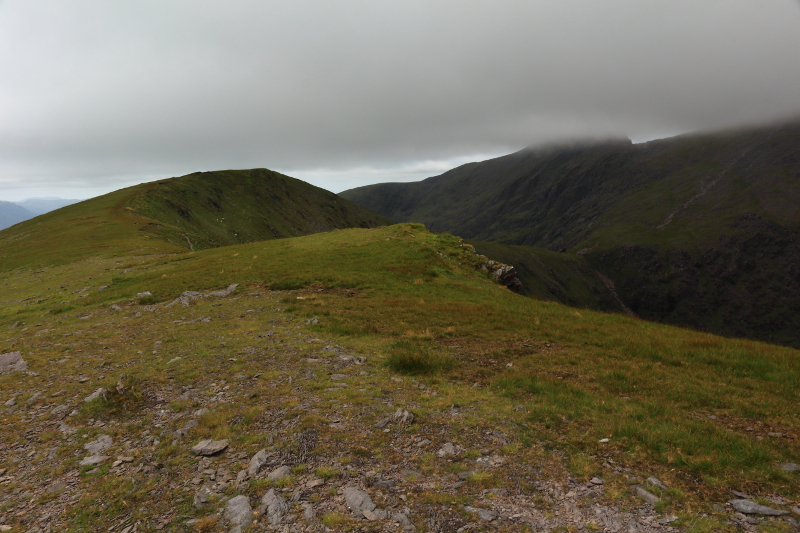 On the lower eastern edge of Cnoc na Toinne’s summit area, and looking back west to the highest point. 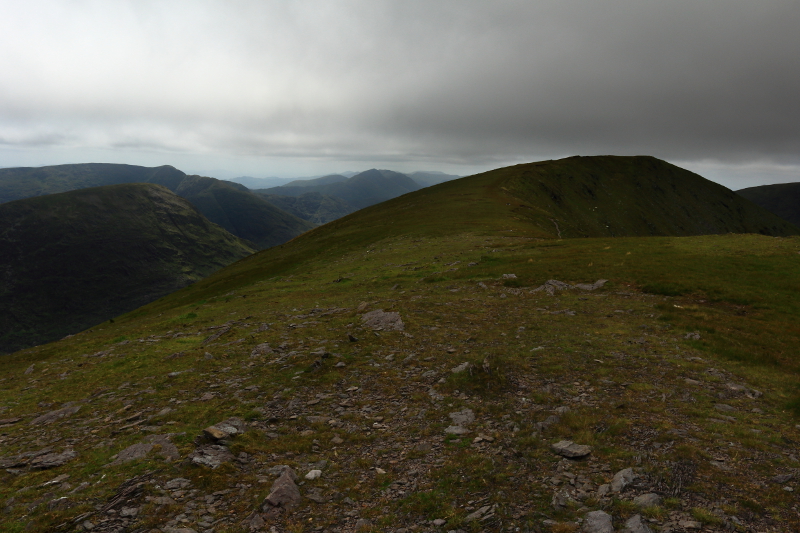 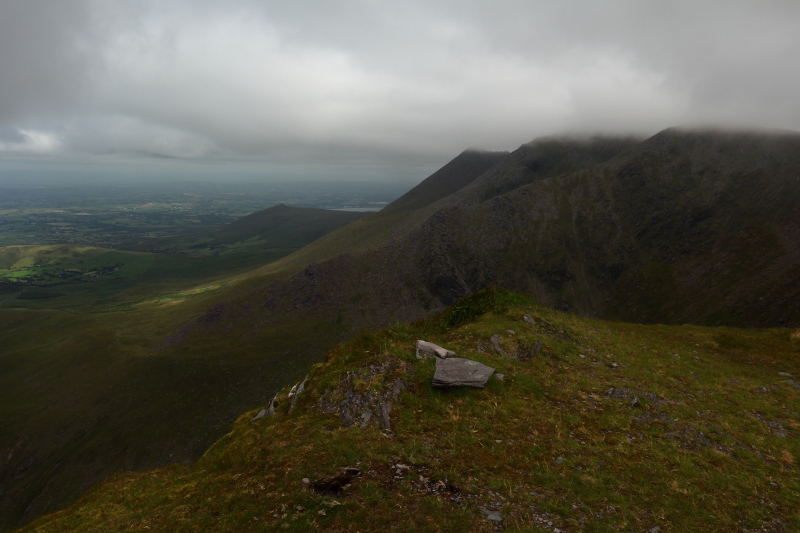 Another view of the northern slopes of the eastern Reeks. 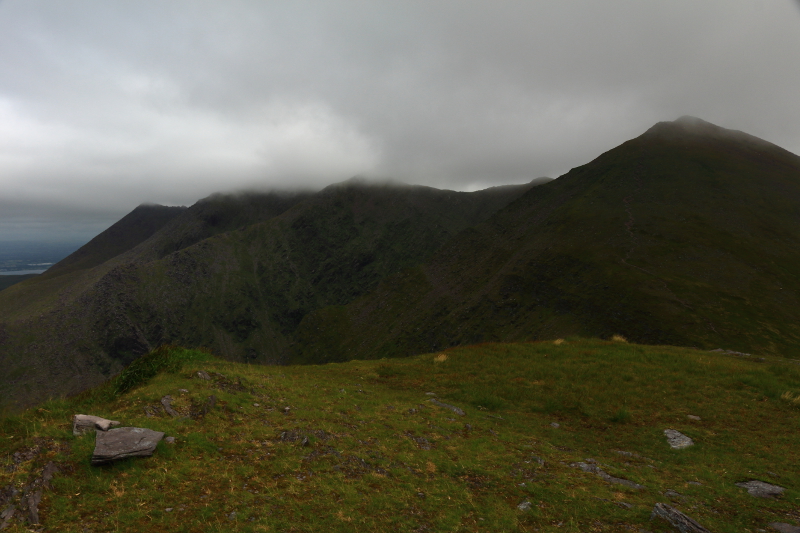 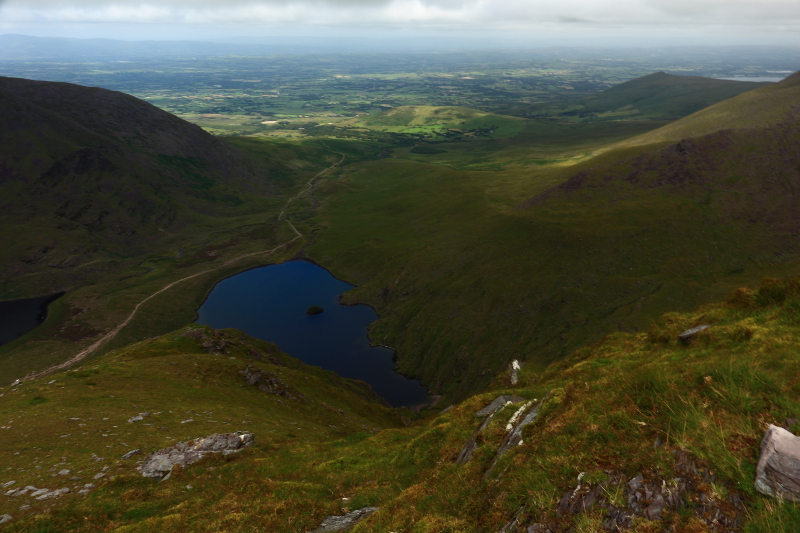 Looking down on Lough Callee and the trail that would take me back to the starting point at Cronin’s Yard.

Cnoc na Toinne had been an unintended bonus after my main goal of topping Carrauntoohil had been achieved.  But what a bonus it had been.  At 845m it is a significant mountain in its own right, and I’d had much better weather than on Carrauntoohil, allowing for better views, and maybe, better photographs too.  In the final part in this series of posts, I will cover the final part of my walk, back down into the Hag’s Glen, and out to Cronin’s Yard.

One thought on “After Carrauntoohil; Cnoc na Toinne”