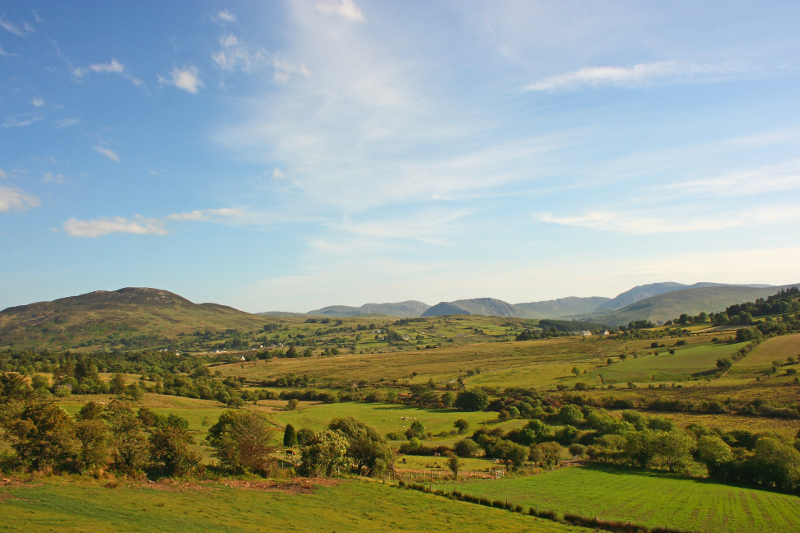 The Bluestack Mountains in Co. Donegal – close to my heart.

Looking through my photos I’ve just realised its about a year since I started hillwalking.  I went up my first mountain – Sawel in the Sperrins, on 22 August 2013.  Looking back now, it was a great decision which has had a profound effect on me.  I have always loved the outdoors and nature, which in turn led me to an interest in photography.  I could regularly be found walking around in the countryside taking landscape photographs, and the mountains would often be a backdrop or the subject of my photos.  Sometimes I would muse on how great it would be to climb them, or see the view from their tops, but to be honest, I sort of thought it would be a huge undertaking, fit for mountaineers only.  Nothing could be further from the truth, and Ireland’s mountains are really quite managable.  Only a year after starting I have now ascended 46 hills and mountains, including Ireland’s highest.

Leading up to the decision to take the plunge, I often found myself looking at landscapes online and taking note of the mountains included.  This inevitably led to further googling, and I stumbled across a few key websites which encouraged me to venture into the hills.  Chief among these was the excellent MountainViews (link – MountainViews.ie) – an excellent website with listings and route descriptions for all Irish mountains.  The site also encourages members to contribute their own descriptions and photos, and it is a fantastic resource.  Being able to plan and research a route before starting gave me the confidence to have a go and I cannot recommend the website highly enough.  I was very pleased to have three of my photographs chosen as “Pic of the month” in my first year of hillwalking and contributing to the site.  I really do have a lot to thank the organisers and contributors to the site for.  Without it, and the information it contains, I might have continued to feel the mountains were out of reach, and I now find that a depressing prospect.

Around the same time, I found the work of someone who I later discovered is also a contributor to MountainViews, Gerry McVeigh.  Gerry makes short films of his trips into the hills and mountains, and his excellent videos can be found at his youtube channel (link – Gerry McVeigh on youtube)  It was no accident that it was after watching his video on Sawel Mountain that I chose it as the first I would climb.  It was reassuring to recognise the route as I progressed.  Gerry’s youtube channel is another great resource, but even if you never set foot on a hill, his videos are worth watching for any lover of landscapes.  I should also mention another pair of MountainViews contributors Martin Critchley and Sharon Schwartz.  Their videos on youtube at Martin Critchley are amazing and would inspire anyone to get out on the hills.

Another influence was Paul O’Connor, who contributes to the walking and hiking ireland website.  His excellent articles and photographs were a further encouragement to get into the high places.  I later discovered that he too is a member of MountainViews (you can begin to appreciate how important the website is in Irish hillwalking circles).

I owe a debt of gratitude to the above mentioned websites and people for helping me get started in hillwalking as I found it to be immensely rewarding and satisfying.  It is good for the mind and body, and has changed the way I look at the Irish landscape.  Standing on the mountain peaks looking at the world laid out below gives a new perspective, and has even changed my mental map of the country.  It is difficult to explain, but where before I would have pictured two locations in relation to each other as a two dimensional line on a map, I now would have a more three dimensional mental image of where they are in relation to each other and the surrounding areas.  I will often find myself on a summit looking at other peaks in the distance that I have stood on in the past, sometimes several counties away.  The effect on my sense of geography has been profound – more than just knowing where more places are, but a deeper sense of the landscape.  I have always been interested in maps and the Irish countryside, and I would not have believed the way in which my perception has been altered, even if I am struggling to put it into words.  I feel certain that many hill walkers will understand what I mean.

Being out in remote areas more often has led to great experiences for a nature lover.  I have seen more birds of prey and mountain hares for example in the last year than the rest of my life put together!  I have seen species for the first time such as red grouse.  I am aware of more plant species than ever before and my knowledge in general has improved, usually due to wanting to find out more about things I have seen while out hiking.

I have thoroughly enjoyed every walk I have been on, regardless of weather, or the prospect for views or photographs.  Some peaks however, stick out as being particularly significant, for their beauty, position as a county highpoint etc, or for purely personal reasons.  The photos that follow are a selection of some of my highlights of my first year venturing onto Ireland’s heights.  These walks will have featured as the subjects of previous blog posts, along with many others, if you want to see more on any of the peaks shown. Hopefully there will be more summits to follow, and I would encourage anyone to give it a go.

The first mountain I tackled, Sawel in the Sperrins.  Choosen because of Gerry McVeigh’s inspirational youtube video, and because its the highest point in my native Tyrone, although its summit is in Co. Derry.  Standing at the top, looking at the views over the Glenelly Valley and for miles beyond, I was exhilarated, and instantly hooked. 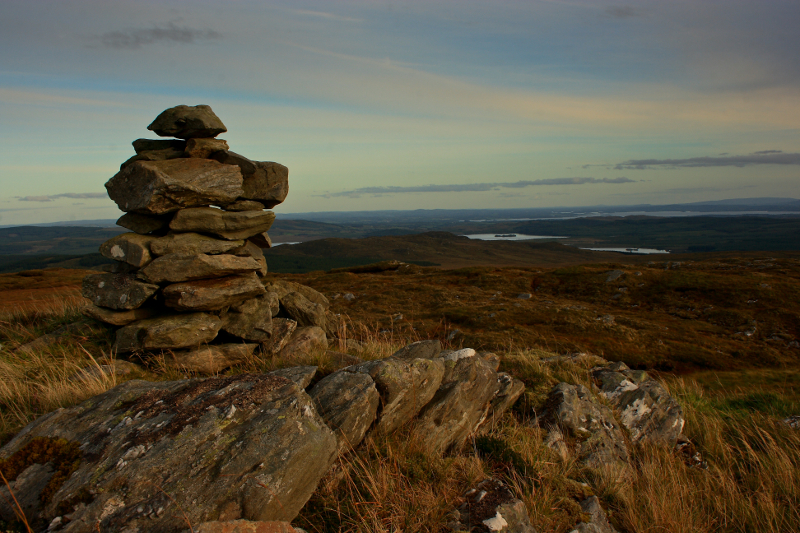 Croaghnameal was my first summit in the Bluestack Mountains which definitely hold a special place in my affections.  It is they, rather than the Sperrins in my own county of Tyrone (although also great), that feel like my “home” range.

Croaghconnellagh was a mountain I was fascinated with since my childhood as I passed it many times and looked up at its seemingly endless sides.  It was another exhilarating moment for me to reach its summit, here looking across to its neighbour Croaghonagh. 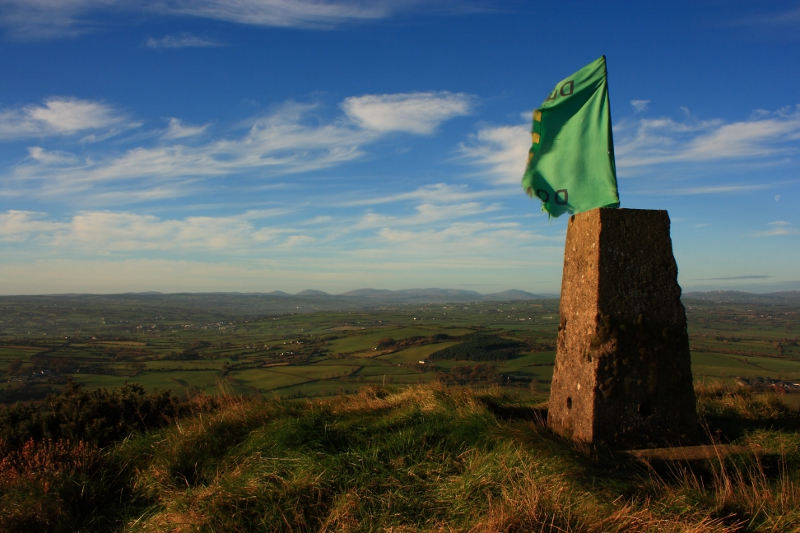 Croaghan Hill is a small height, standing alone.  It was a lesson, if it was needed, that even the more humble peaks can be a great experience, offering amazing views, in this case towards my beloved Bluestacks.

Another lesson, perhaps not really necessary, that reaching the intended goal, or “bagging” a peak should not the be all and end all.  This photo was taken on a walk meant to include a new summit – Croaghanirwore.  As it turned out, deeper snow higher up defeated me, and I had to turn back without reaching my target.  But what a day I’d had experiencing the mountains in the snowy conditions.  I could not count the day a failure. 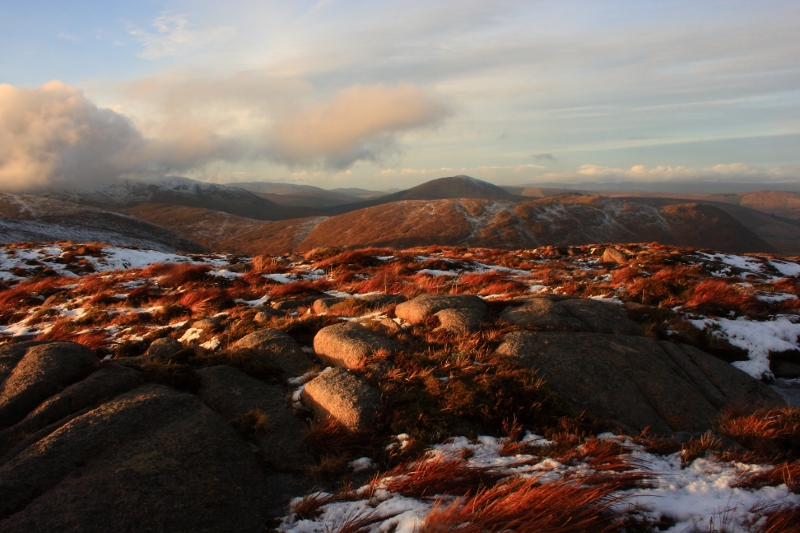 A walk over Browns Hill and Croaghnageer stands out in my memory for being my first time to experience whiteout conditions and real snow on high ground.  Cleared up for this shot so I had great variety of weather.

The above photo was taken on Mullaghcarbatagh in the Sperrins, on a walk which also took in three other peaks – Mullaghclogher, Mullaghasturrakeen and Mullaghclogha, the highest actual peak in my home county of Tyrone.  It was by far my longest, most difficult hillwalk so far, and having done it, it gave me more confidence to take on bigger challenges. 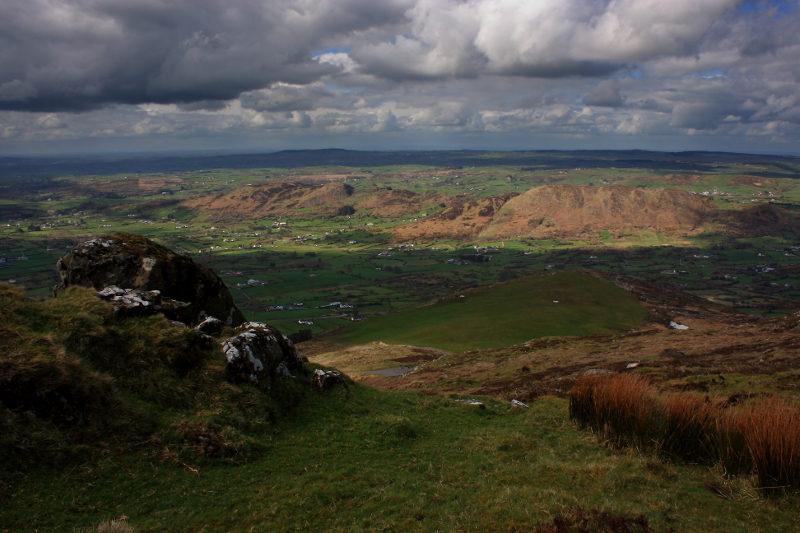 Slieve Gullion is an iconic mountain, sitting in the centre of the remarkable Ring of Gullion, and a new range for me too, and therefore memorable for the new views it brought. 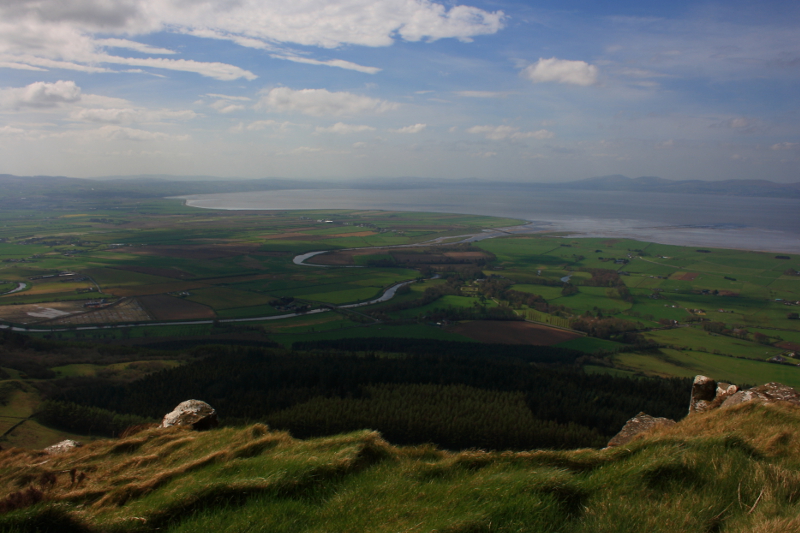 Binevenagh, another iconic mountain.  I had looked admiringly at its distinctive profile from the countryside below many times and it was great to walk around the summit. 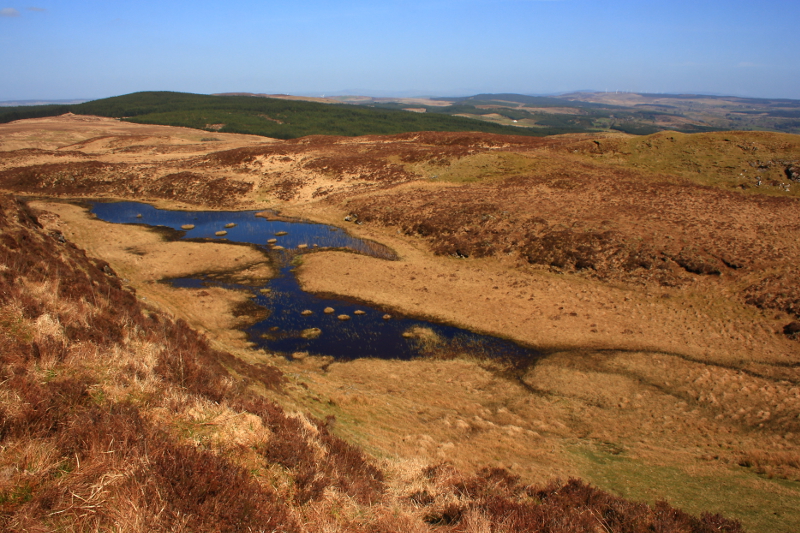 Crockkinnagoe is not the most well known of hills, but it was a revelation.  Not having high expectations I was enchanted by its hummocky top, and this little lough.  The views were magnificent too.  I had a brilliant day wandering around its summit, so don’t ignore the lesser known hills.

Slieve Donard was another milestone.  The highest mountain in Co. Down, the Mournes and the province of Ulster.  It was by far my highest summit to date, and again, a new range for me.  This photo was taken from neighbouring Slieve Commedagh which I included on the same walk. 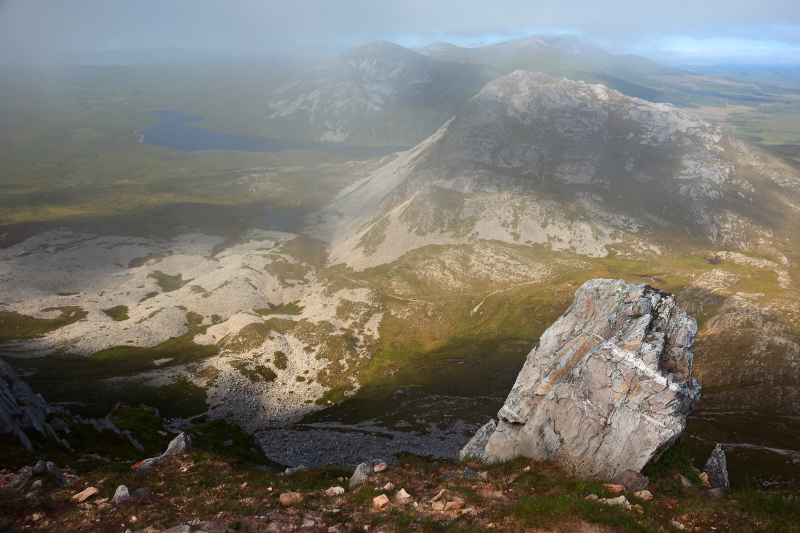 A shot taken through the clouds on the way up Errigal which I had wanted to climb for a long time.  There is something special about Errigal.  It was almost a mystical experience, which is very unlike me, but it felt significant in some way to stand on its summit.

Carrauntoohil emerging from the clouds.  This is the highest mountain in Ireland, and therefore obviously a significant peak for me.  Its attraction is not just in numbers or statistics however.  It is a magnificent mountain in the great MacGillycuddy’s Reeks range, with views over the beautiful county of Kerry.  It was amazing to gaze on other stunning mountains stretching to the horizon.  Admittedly, it did feel great to briefly be the highest man in Ireland though.  A real confidence booster too. 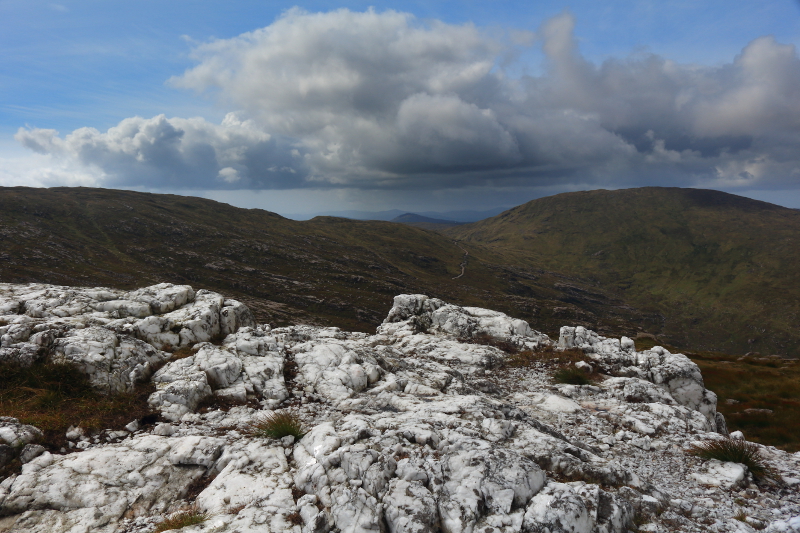 My last walk of this first year of hillwalking.  I had been wanting to do it for a long time as it takes in several of the highest peaks in the Bluestacks, but I had been a little wary of it if I’m honest.  I think having been on top of Carrauntoohil had given me the confidence to take it on.  The photo was taken from the slopes of Ardnageer SW Top, at an amazing mound of white quartz which was breathtaking.  Beyond are my next destinations, Croaghgorm on the left, the highest point in the Bluestacks, and Lavagh More on the right.  A brilliant walk in the great Bluestacks range, and unbelievably, I had the whole place to myself.

These are just some of my personal highlights, but as I’ve said, every one of the hills and mountains I’ve been on hold great memories.  And, I have a long “to do list” for the future so hopefully there will be many more rewarding days to come.  Little did i know when I took my first steps up Sawel a year ago where the journey would lead!

2 thoughts on “A Year Of Hillwalking”