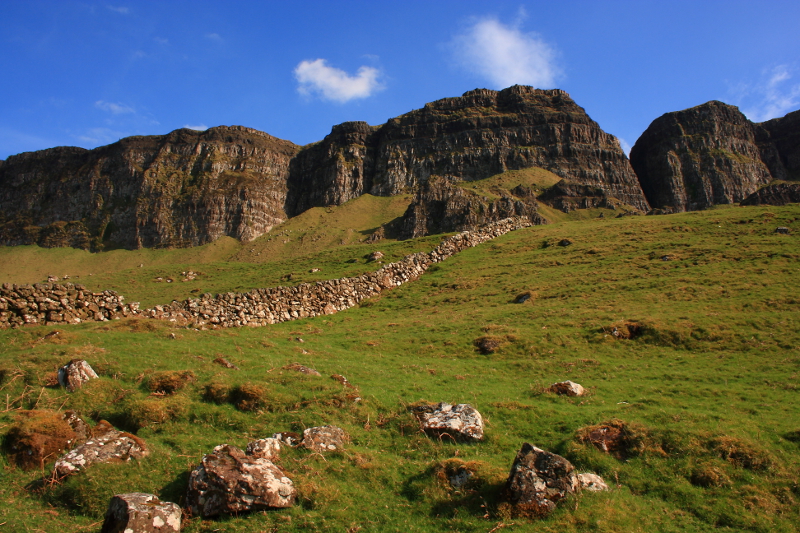 I’d thoroughly walked the top part of Binevenagh, and was now taking the car down to Ballycarton Wood on the Aghanloo Road, just south of its junction with the Seacoast Road. On the way down I stopped the car a few times for photos of Binevenagh, glimpsed through the hedges, as it presented a very different profile from this angle. Its rounded shape gave no clue to the dramatic hidden side. 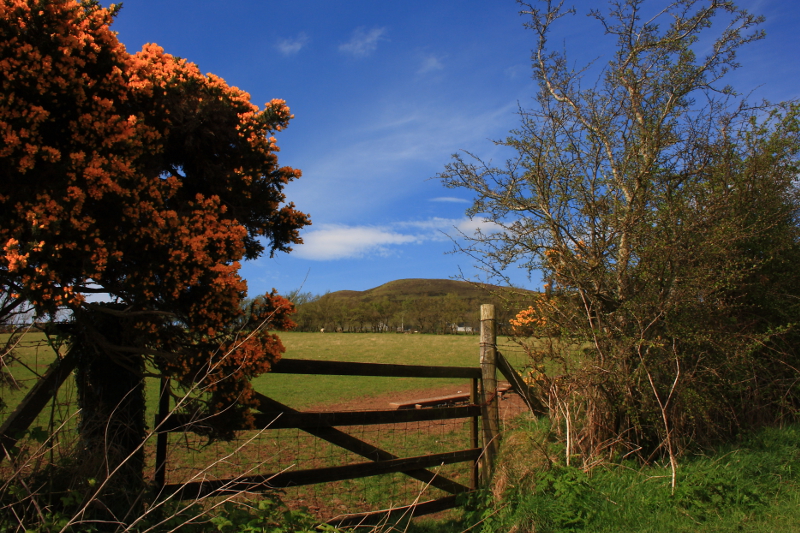 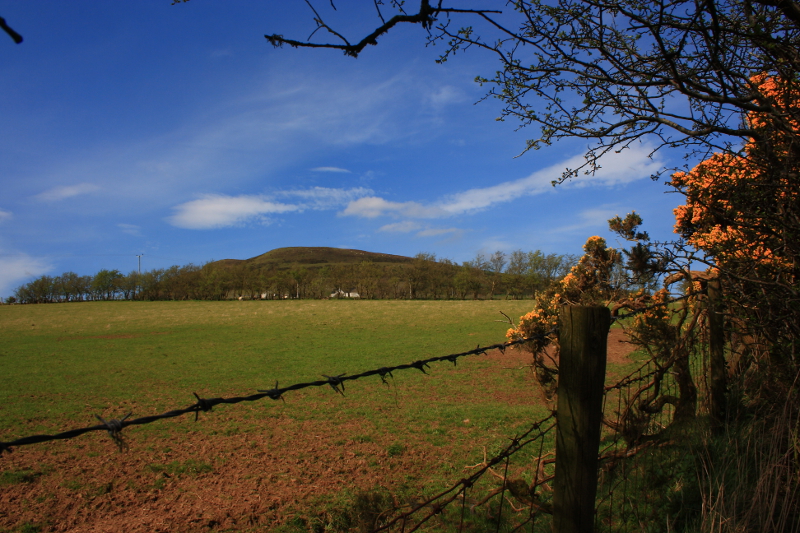 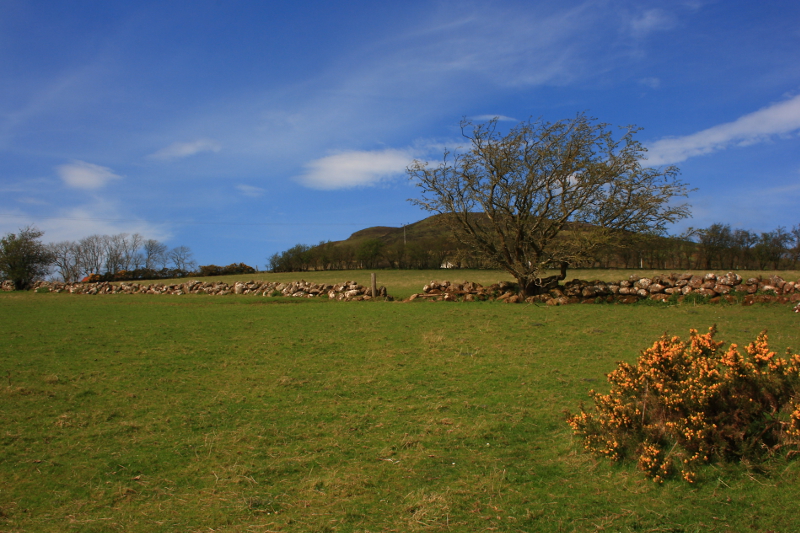 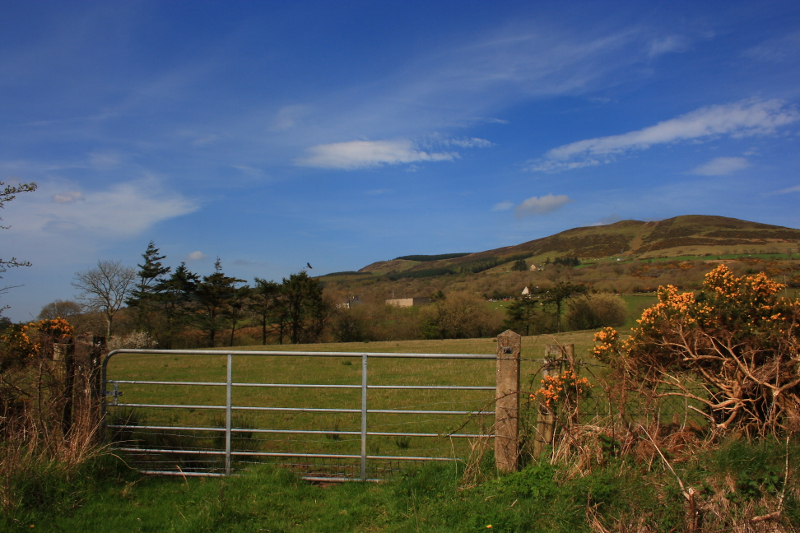 Before dropping down entirely, into the Roe Valley, there were also good views to the South. In the photo below, you can see Keady Mountain on the left, then the distinctive shapes of Donalds Hill followed by Benbradagh, and finally the main Sperrin range. 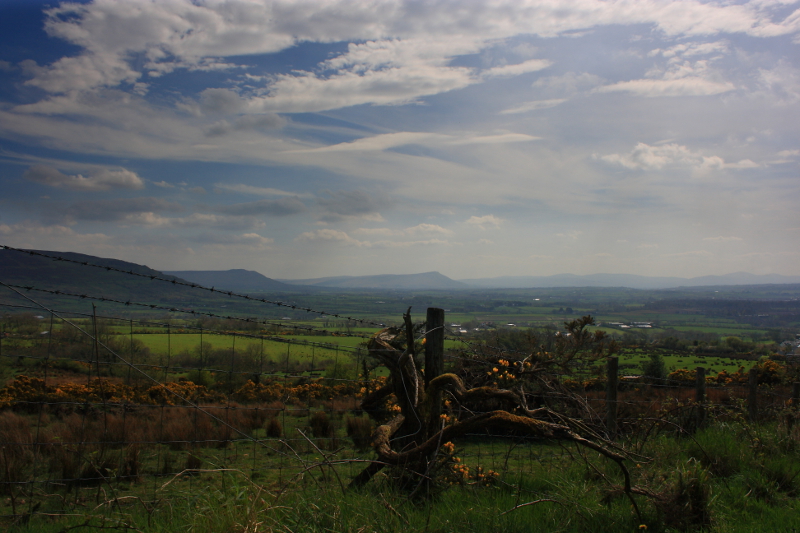 Some more shots looking south on the road down from the mountain. 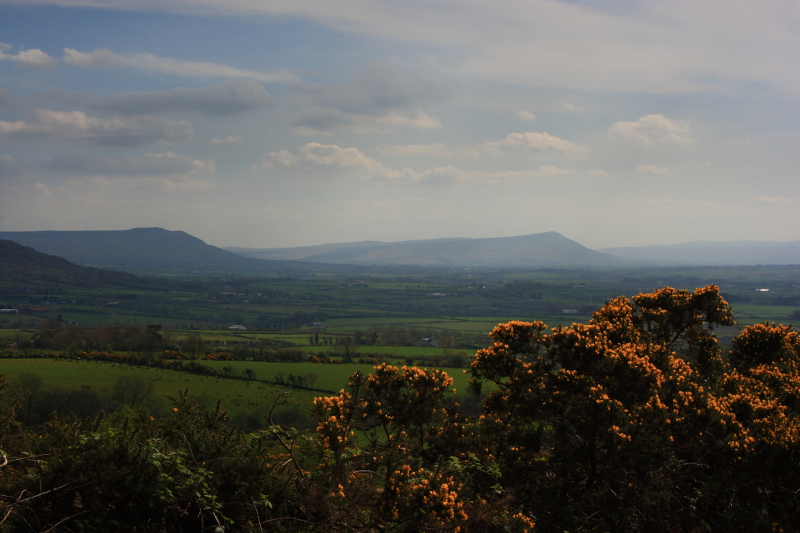 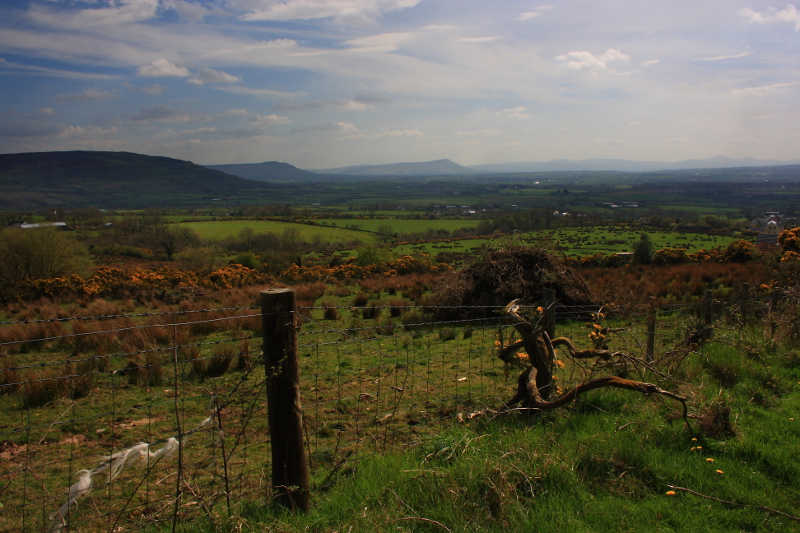 The photo below was taken just north of the entrance to Ballycarton wood, with Binevenagh presenting a more recognisable profile. 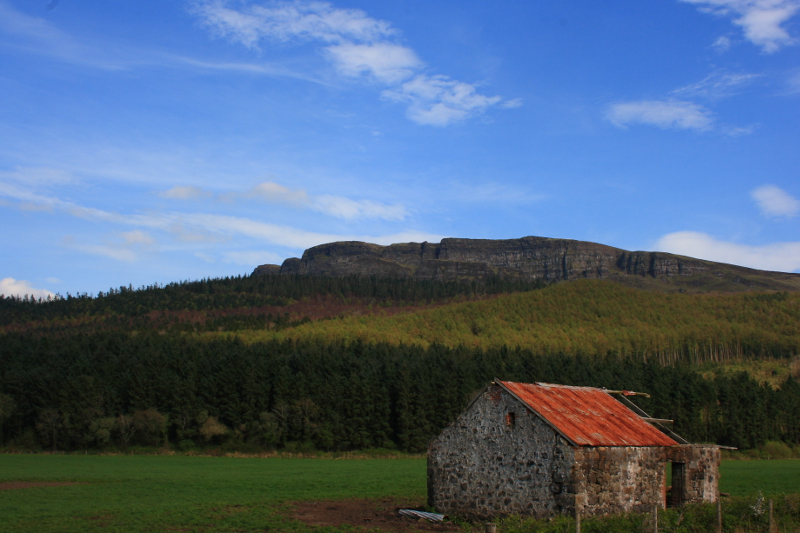 I parked at the entrance to the woods, and began the longer than expected trek along the forest trail, ascending all the way, as the path wound its way to the foot of the cliffs. 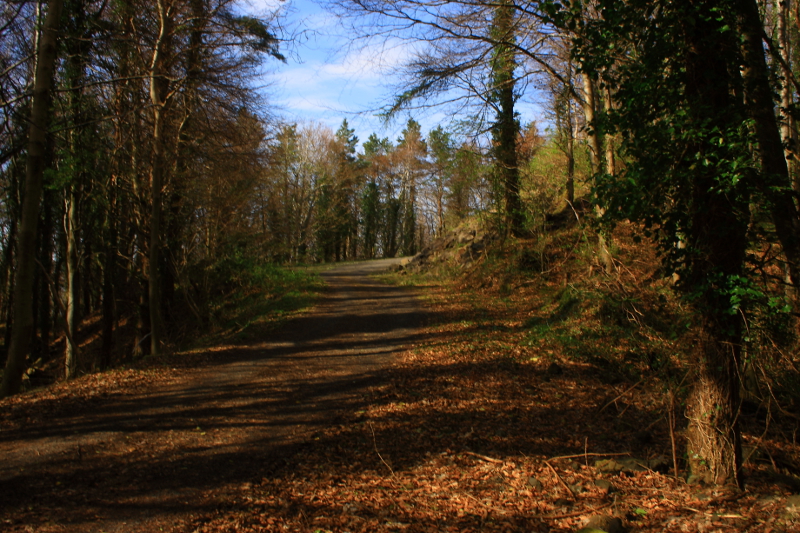 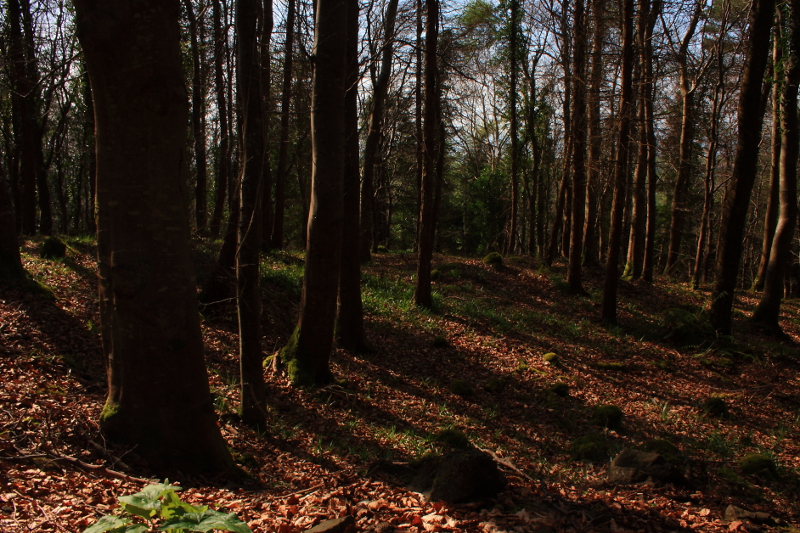 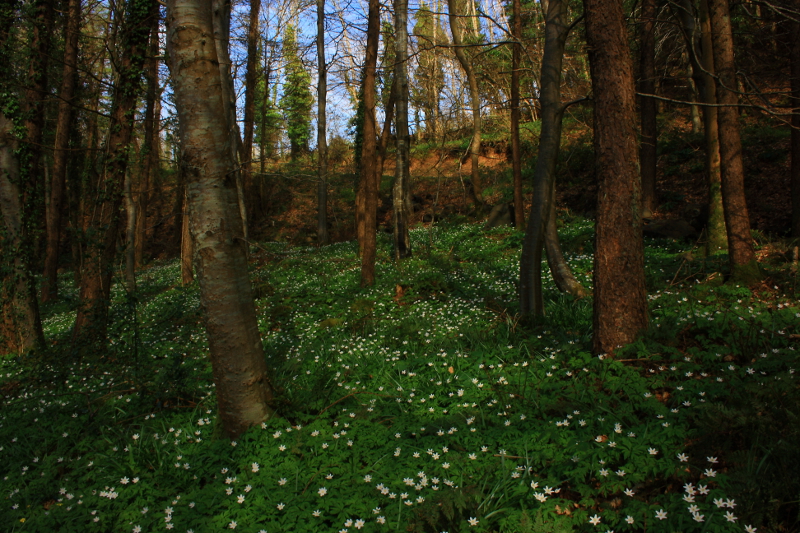 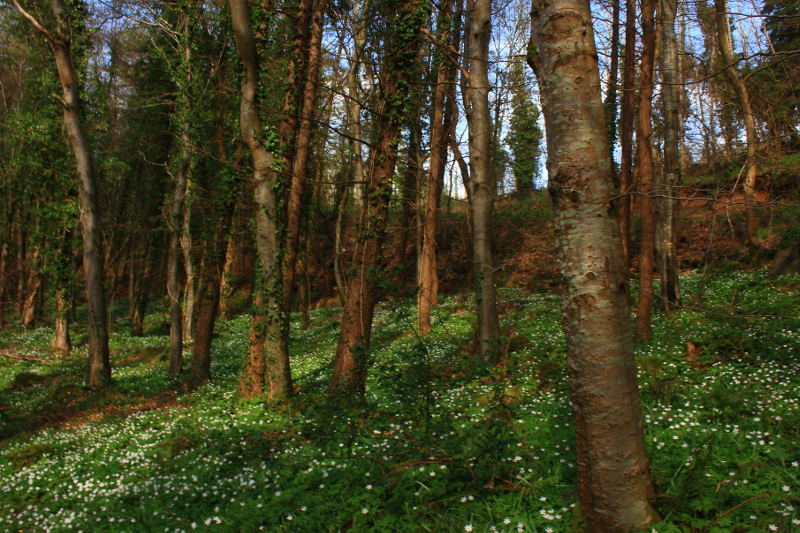 Eventually, the path emerged from the trees and I found myself at the base of the cliffs that I had admired from above earlier in the day. They were equally impressive from below looking up. 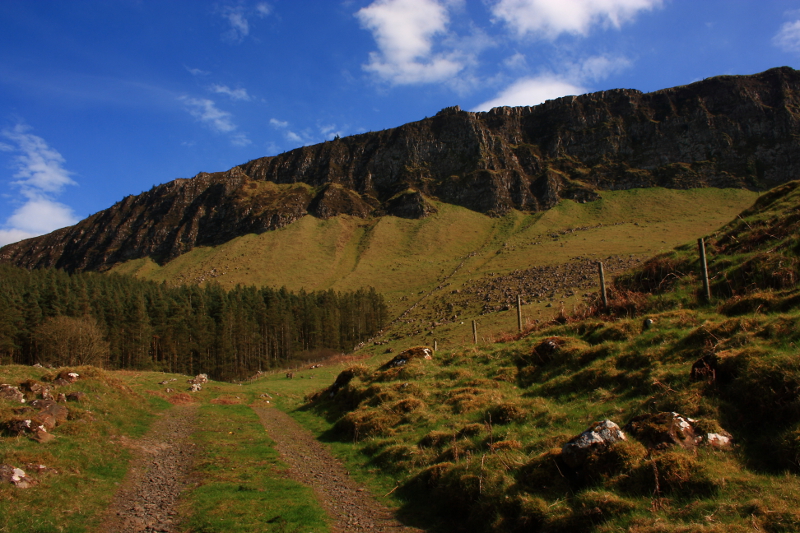 The path through the woods had taken me in a northerly direction, but now it took a u-turn back to the south along the bottom of the cliffs, to the east of the trees, ascending as it went. I moved along enjoying this new perspective on the cliffs and rock formations. 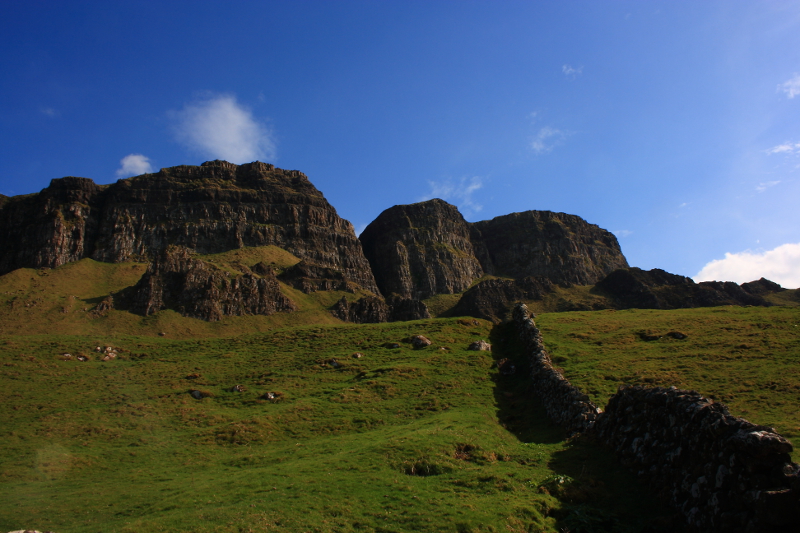 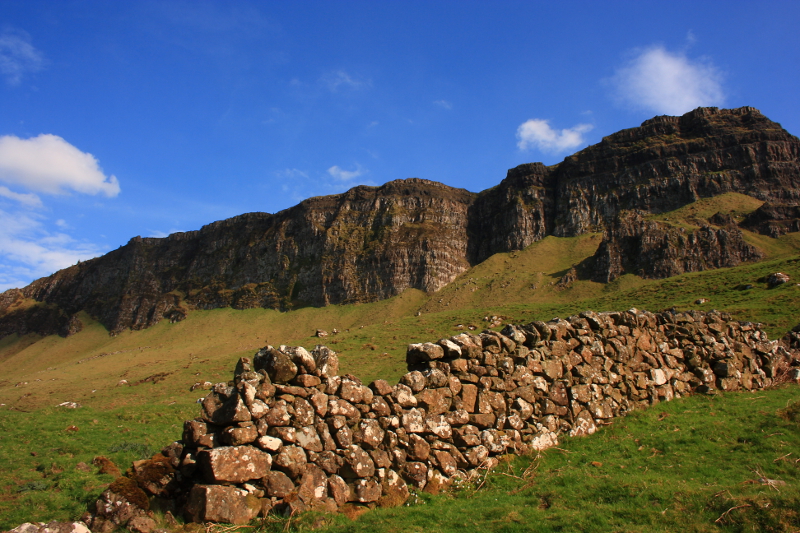 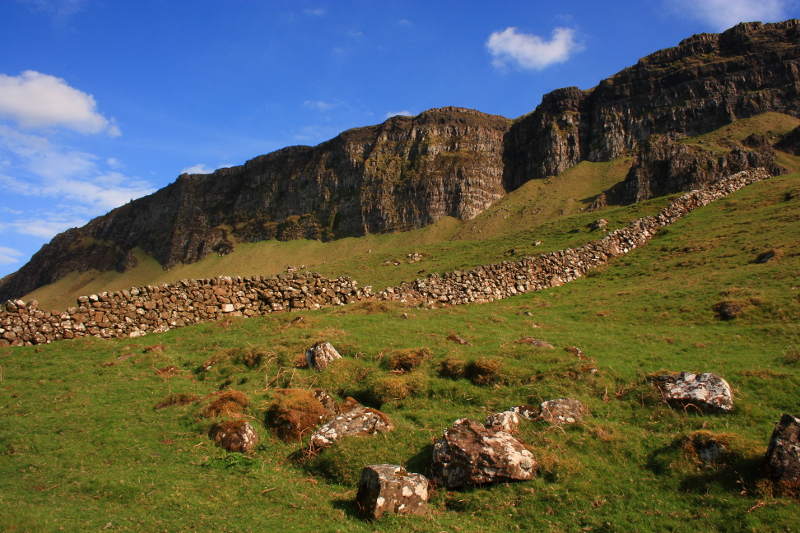 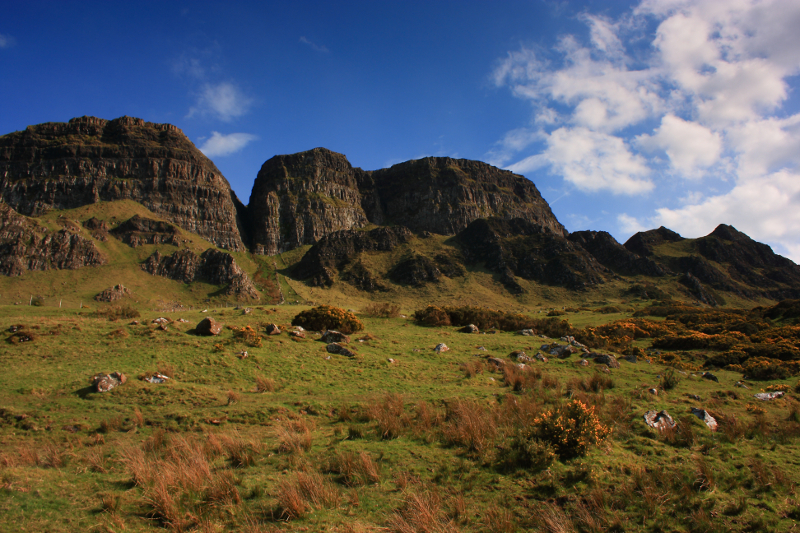 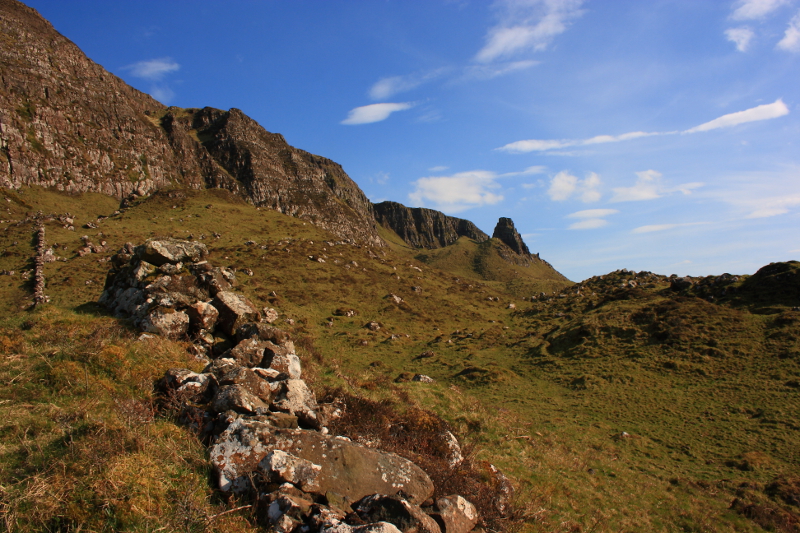 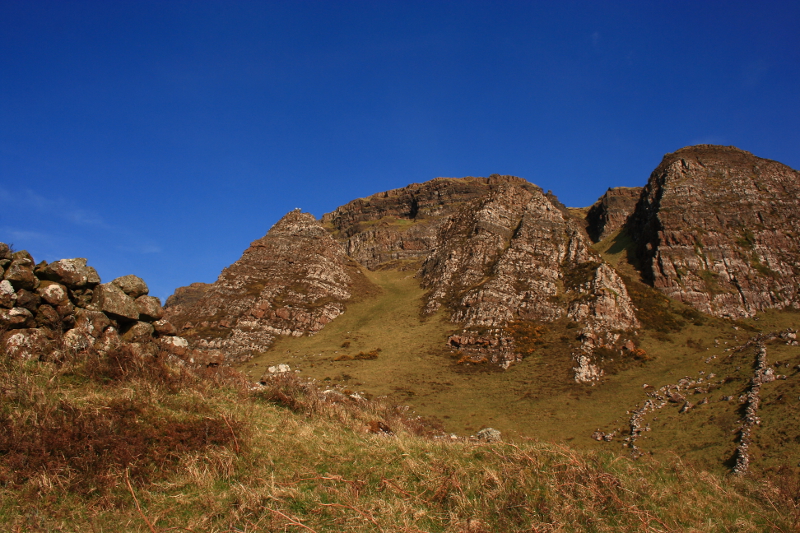 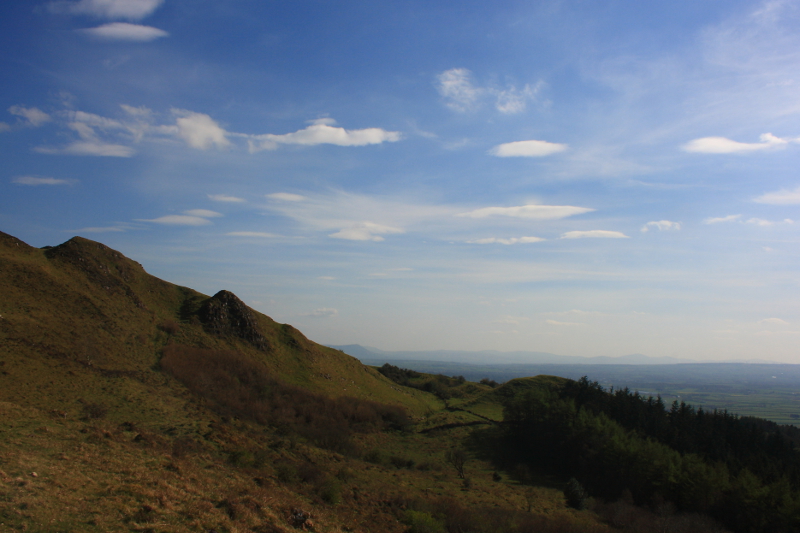 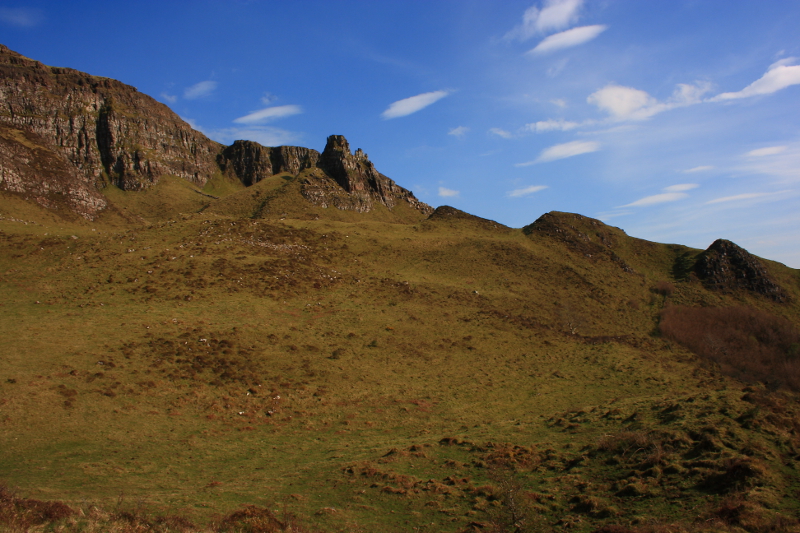 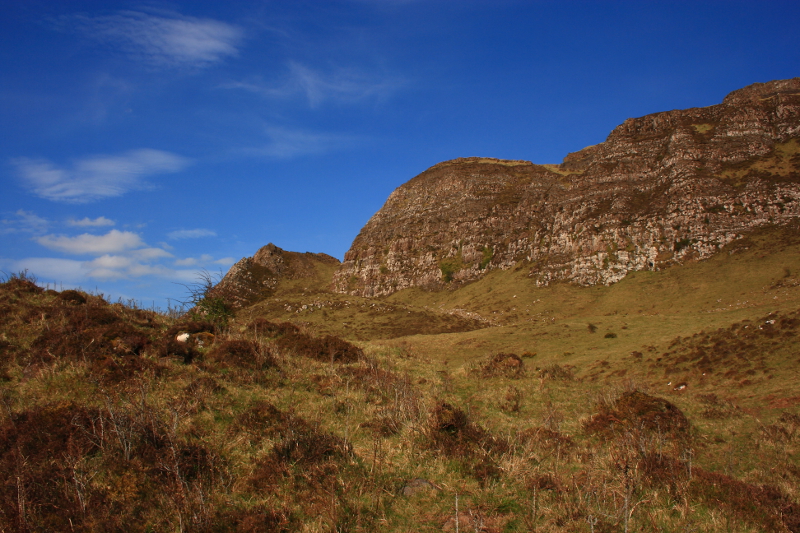 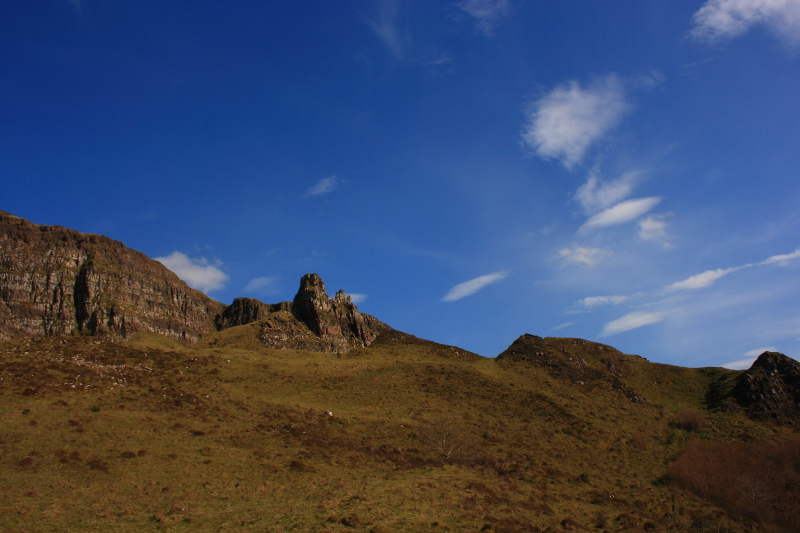 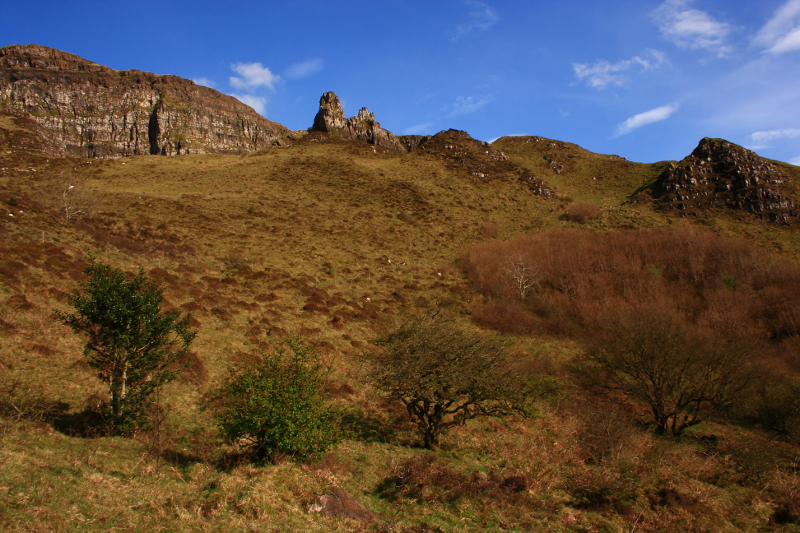 Eventually I reached a point just below the place where I had left the cliff tops earlier in the day to cut along the fence for Binevenagh’s summit and trig pillar. I had also gained enough height to be not far below it. I had by now filled my memory cards with photos, and decided that I did not fancy the long walk back to the woodland trail, and then through the woods again. After making the u-turn on coming out of the woods, I had taken a parallel route to that trail, and I ill-advisedly thought I could shorten my journey by cutting straight across the woods to the west and my starting point. This did shorten the distance considerably, but the woods were dense, trackless, disorientating, and involved some very high and steep slopes. In some places I could touch the tops of trees who’s bottoms were also at the bottom of the slope I was descending, and I could use the trunks to help my descent, so steep were the drops. It was also disconcerting to walk under trees which had toppled over, and were now supported by the branches of their densely packed neighbours far above. They creaked and groaned in the breeze, giving the impression they could come crashing down at any minute. Of course, they didn’t, and I made it out, using the sun to make sure I had been going in the right direction. I had cut miles off my return to the car at the forest entrance, but I could not recommend this route. I won’t be cutting through this type of thick coniferous forest again!

I had been feeling guilty at taking the car down to approach the cliffs from the bottom, rather than descending from the top, but I don’t think it was actually any shorter to do this. The walk through the woods had been long. I had used an app on my phone to track my walk, and the two separate routes together, at the top and bottom, had combined to make a distance of 19km. On this hot day, I now felt that I had earned my views.

And what views they were. Binevenagh is a mountain which is equally pleasing whether looking at it from below, or standing on it taking in the landscape beneath. Highly recommended for hill walking enthusiasts.

2 thoughts on “Binevenagh From Below”