Slieve Gullion in south Armagh is a mountain with many fascinating aspects, from its central position in the amazing Ring of Gullion, to its links with ancient Irish Legends, from its historical cairns, to its strategic importance in both ancient and modern history. A day of dramatic weather, mixing thunderstorms with bright sunshine, led me to take a diversion on the way home from Belfast, to walk its upper slopes and stand on its broad summit.

Having only a short time to experience it, I opted to drive as far up the mountain as I could on the forest park drive, which took me high up its southern slopes, parking where the road doubled back on itself to begin its descent. Even on the drive up, views were magnificent over south Armagh and beyond. Below is a view towards Croslieve through the forest.

Croslieve is a 308m high hill which forms part of the Ring Of Gullion, an amazing geological phenomenon known as a ring dyke, formed by a massive, disappeared volcano, in a process beginning over 400 million years ago, and still not fully understood. Slieve Gullion in the centre of hills forming the ring dyke actually dates from a later period than the dyke.

After parking, I set off up the 573m high Slieve Gullion with still some ascending to do, and every metre gained made the views more impressive. Below, I was stunned by the view over the flat countryside to the south, with the ring dyke clearly visible beyond, encircling the mountain.

Looking to the southeast towards Croslieve and Tievecrom, with dramatic skies above. 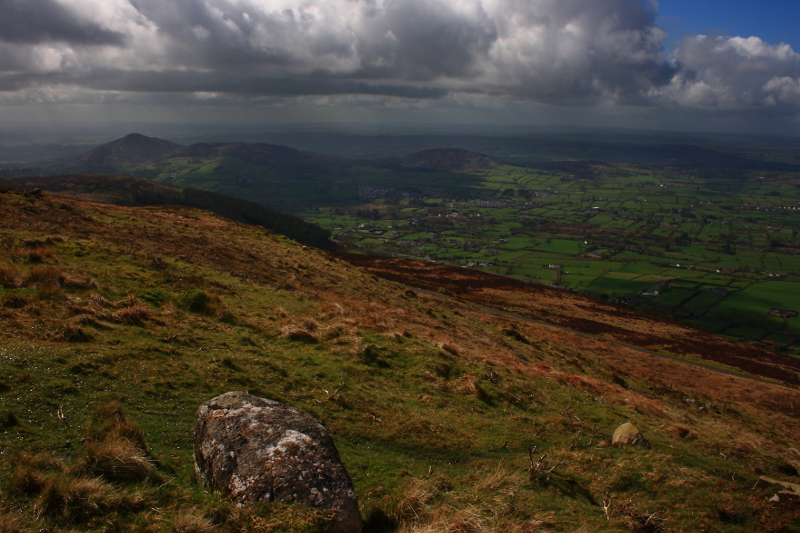 As I neared the summit, the huge, ancient cairn came into view, the site of an old passage tomb. 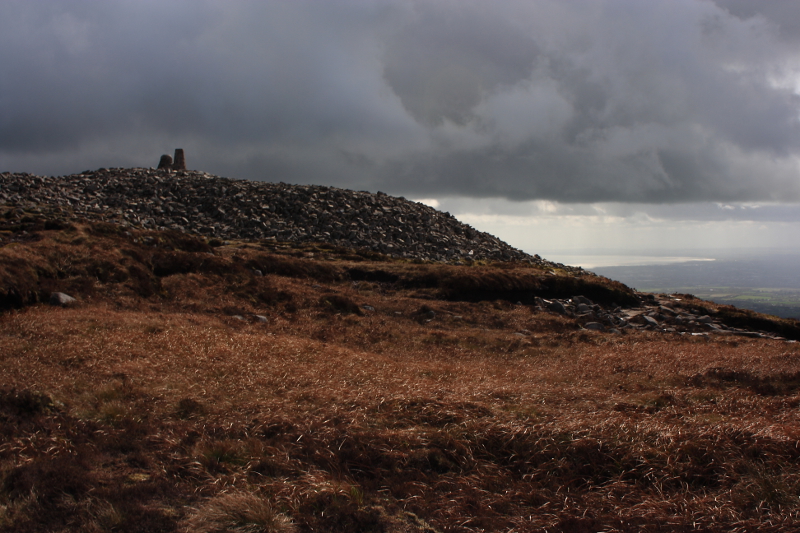 On top of the ancient cairn stands a modern cairn and a trig pillar, marking the highest point in County Armagh. The height, and position of the mountain, in the Gap of the North, made the mountain a site of great strategic importance to the old celtic kingdom of Ulster, guarding the entrance to the kingdom from the south. In more recent times, during the “Troubles” it maintained this strategic importance, forming a base and lookout post for the British Army. It was essential in the “bandit country” of south Armagh, where travel by road was too dangerous for the army, and helicopters were the preferred mode of transport.

On top of the burial chamber cairn, the views were expansive over the surrounding countryside, with storm clouds and sunshine creating light shows far below. 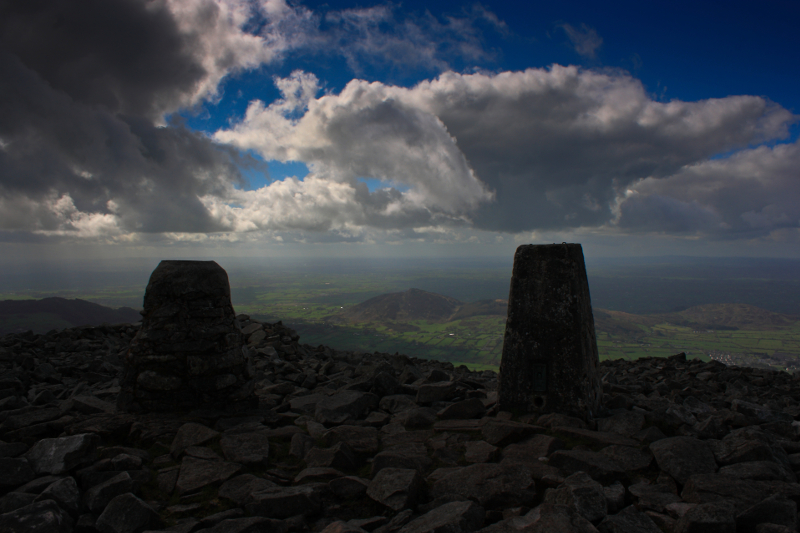 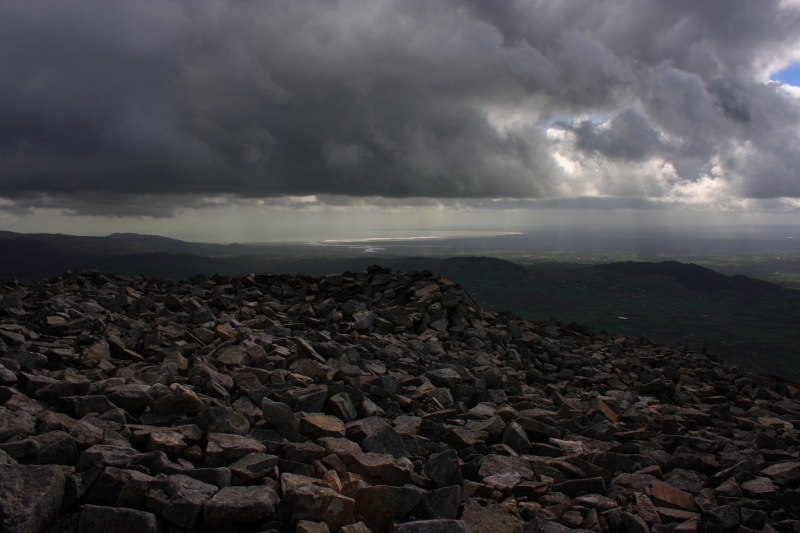 Looking east to the Cooley Mountains in Co. Louth.

Great views in all directions. Depending where I looked, I could see the Mournes, Camlough, and much of Ulster to the North and West. 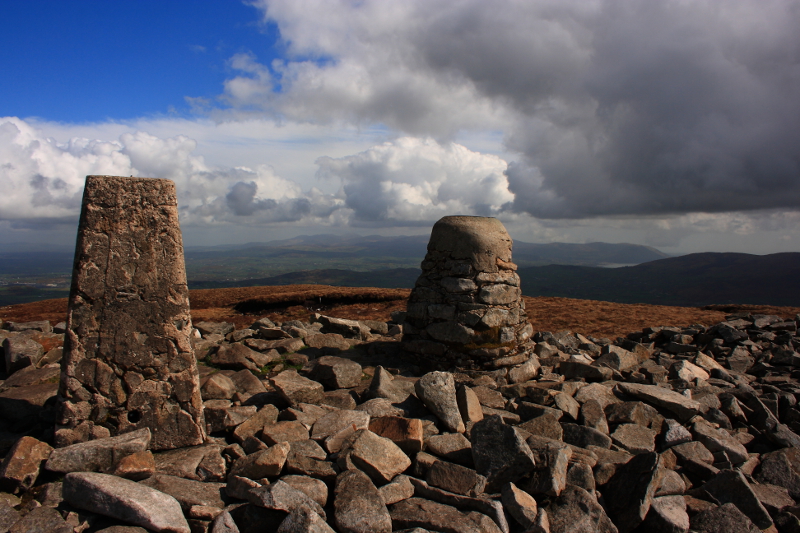 Looking towards the lower northern summit, which I now set off for.

A look back at the main summit.

Looking north to Camlough Mountain and the lough itself. 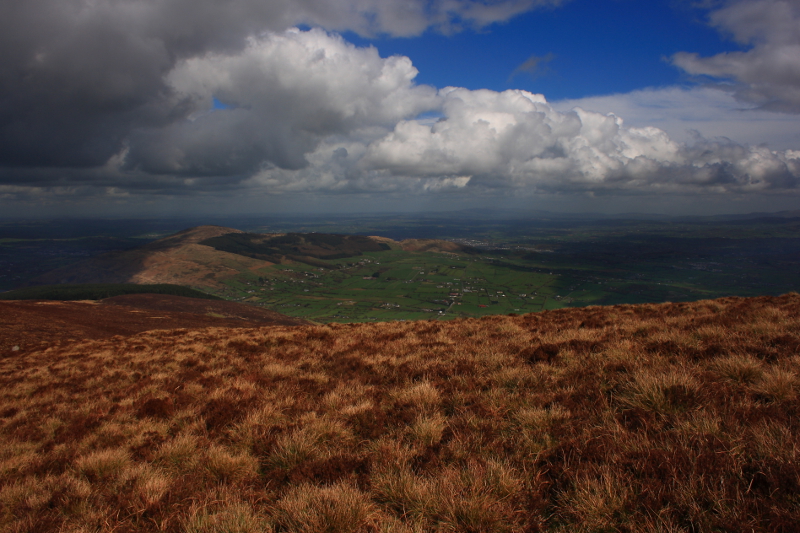 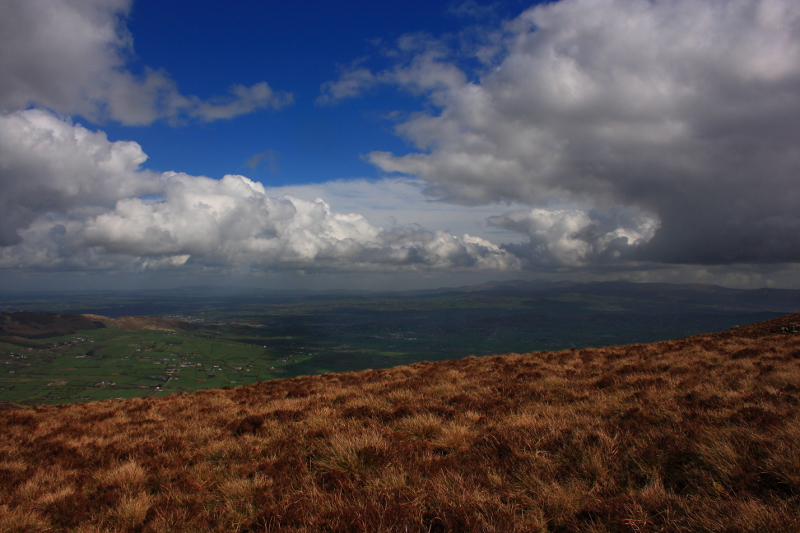 Looking west to the Cooley Mountains, with a glimpse of Carlingford Lough, and the Mournes on the other shore. 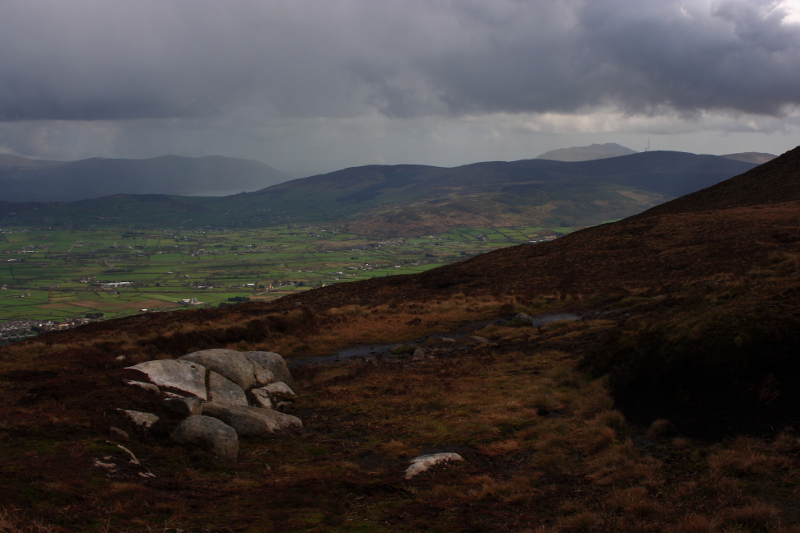 A view of the distant Mountains of Mourne. 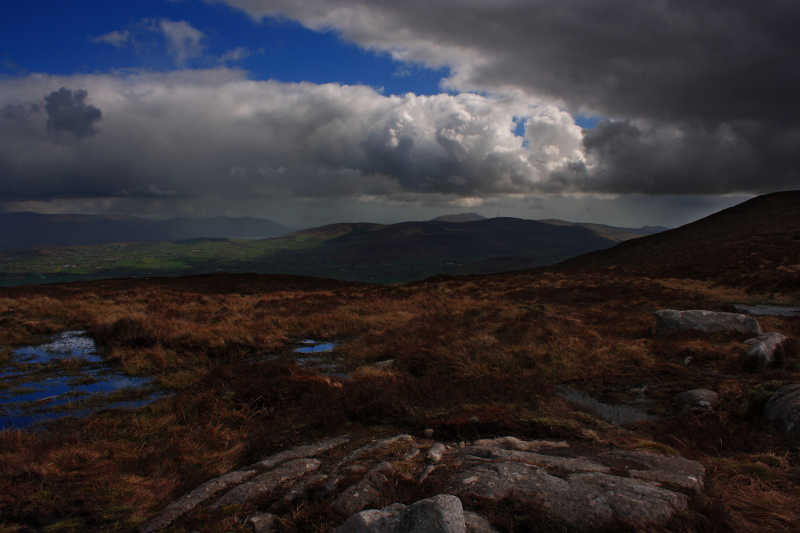 Slieve Gullion has many legends attached to it, and has been linked to the two greatest heroic figures from Irish myth cycles. As mentioned earlier, the mountain guards the Gap of the North, the geteway to Ulster, and it was in this area that CuChulainin, defended Ulster from the armies of Queen Maeve of Connacht on the Cattle Raid of Cooley, part of the Táin Bó Cuailgne myth cycle. The other great hero, was Fionn Mac Cumhaill, or Finn MacCool, who is said to have met the witch Miluchra on the shore of Calliagh Bhirra, and been turned into an old man. He managed to break the spell, but the legend is that anyone who swims in the lough will have their hair instantly turn white. I didn’t put the theory to the test on this visit. 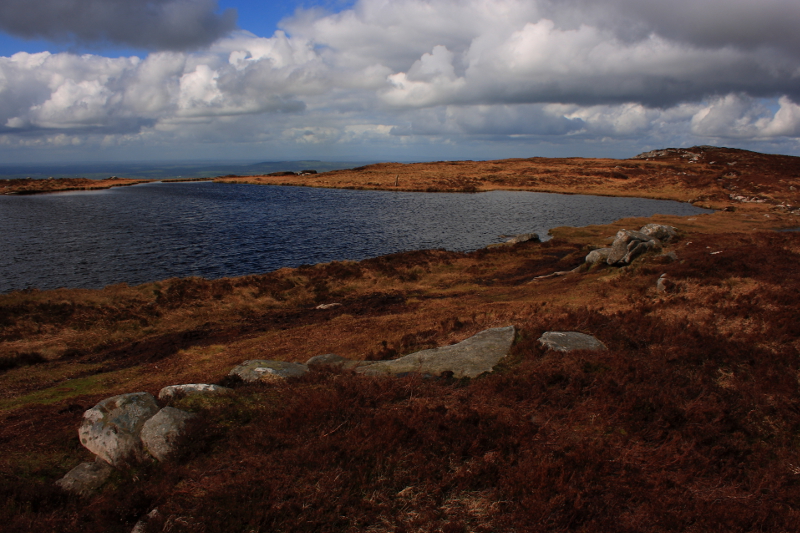 A few views from the northern part of the summit. 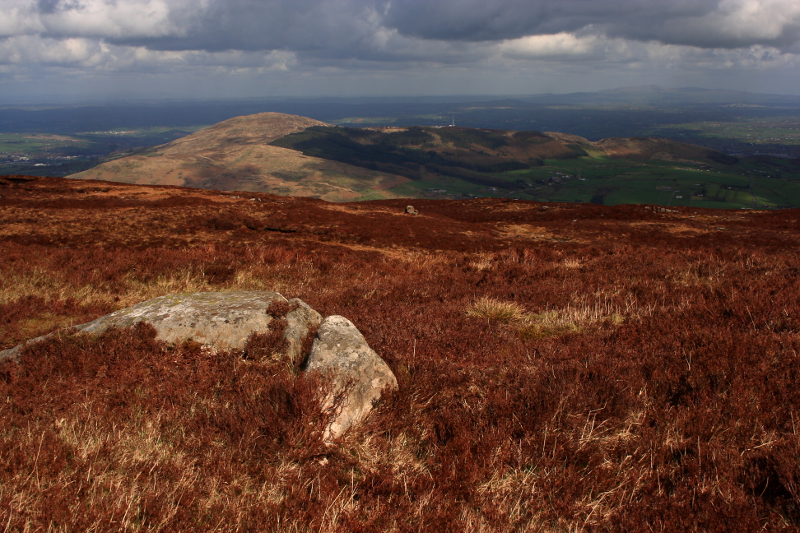 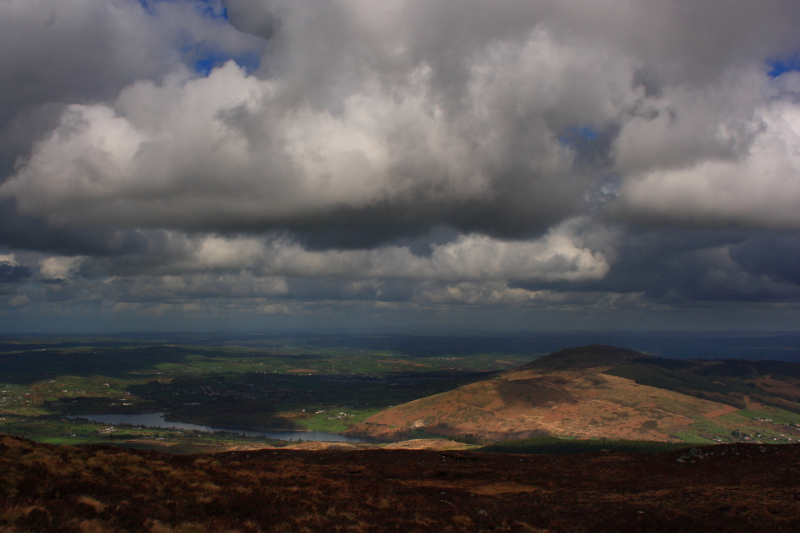 I was now high above the point where I had started out, and would dexcend directly from here, taking many more shots on the way of the southern part of the ring dyke, and the plains around it. Again, the clouds were dramatic at times, and the landscape below waa ever-changing in the shifting light. 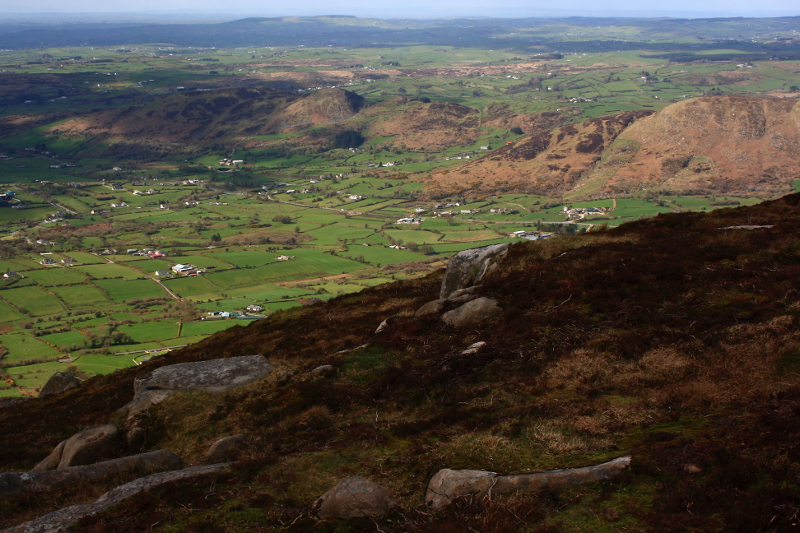 A last look to Croslieve. 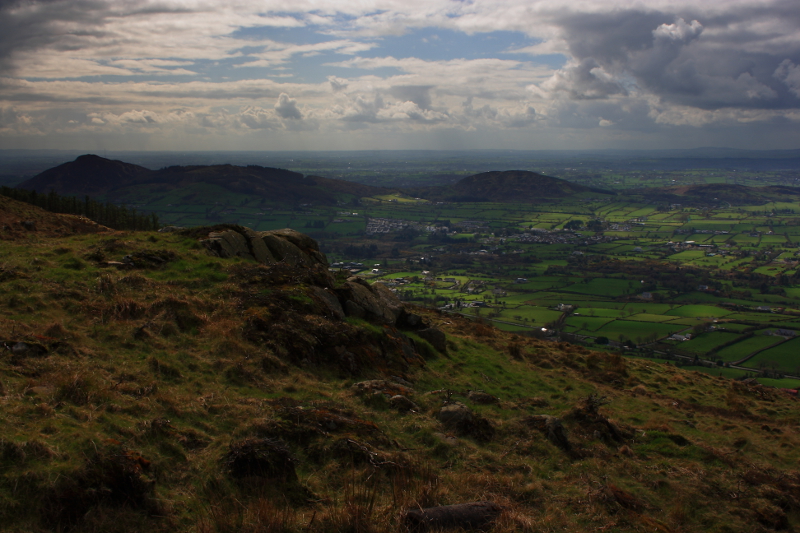 This was a flying visit, with time to do little more than claim the summit and admire the views, and I almost feel that I did not give this great mountain due respect. I fully intend to return and ascend all the way from the bottom, taking time to explore the forest park on the way, and to fully investigate the summit cairn, where the passage tomb can actually be entered. It will be well worth further visits.