I’ve already posted on our family holiday last Summer in Ennistymon in Co. Clare, and this is an account of another trip we took, Southwards to the seaside resort town of Kilkee.  We set of on an aimless drive in late morning on a day of torrential rain.  As we drove South along the coast, we didn’t really stop as the rain was too heavy to even get out of the car.  Eventually, we stopped for a few minutes on arrival in Kilkee, at a parking spot overlooking the bay.  It looked like a lost cause for sightseeing or photography, but to our surprise, after a few moments, the clouds began to break a little.

The bandstand on the seafront.

It was a brief interlude, and the promising blue skies were soon hidden again behind thick black cloud, so it was back to the car and a short drive this time along the coast road South of the town.  There, when the rain stopped, there were views of the impressive cliffs and sea stacks along this part of the coast.  In the view below there is a temporary waterfall over the cliffs, from the heavy rain.  Incredibly, you can also see the ruins of a very inaccessible building on the farthrest sea stack.

We walked around briefly admiring the rugged coastline.

Then back to the town for a walk around the shops, sea front and beach, as the weather slowly improved.

As a last stop we took the short drive to the Southern end of the town, to an area known as “Diamond Rocks”.  Here there was a statue in honour of Richard Harris, from nearby Limerick.  The statue depicts the actor, aged 18, winning a squash tournament.  The statue was unveiled by the actor Russell Crowe who said the town had some of the best walks in the world. 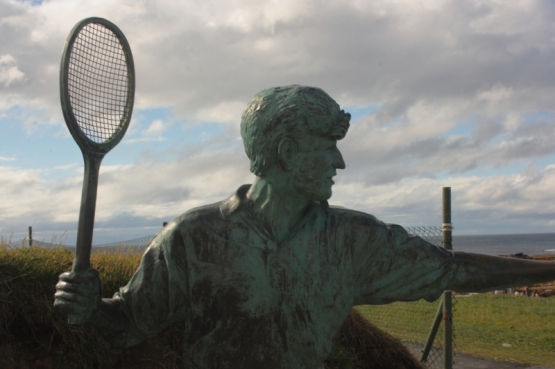 This area is known for the Pollock Holes or Duggerna Reef which form natural, rock swimming pools. 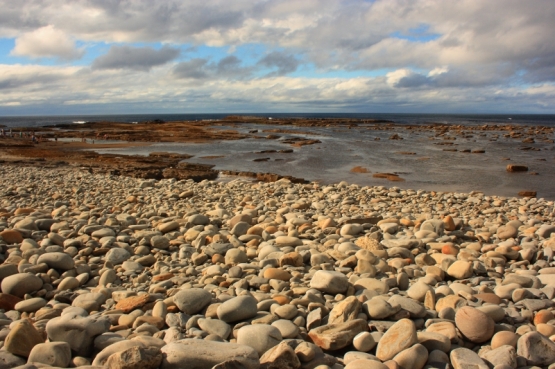 At this point the skies had cleared, and it turned into a sunny Summer’s day.  There were great views from here across the bay to George’s Head.

And also back towards the beach and seafront.

We spent a happy hour or so basking in the unexpected sun here, before leaving Kilkee and enjoying the rest of the weather in Lahinch.  It wasn’t our first visit to Kilkee, which we had holidayed in before, and I’m sure it won’t be the last.